Master of Malt
No Comments on The Nightcap: 14 April

In the early Easter weekend Nightcap, we’ve got stories about one of our own getting shortlisted for an award, a bourbon brand being slammed over sexist marketing, and robots coming to take our money or our livelihoods.

It’s the Easter weekend. This is a Thursday. The Nightcap is early because we have a glorious four-day weekend ahead of us. So gobble up another bowl of boozy news and then go forth and enjoy all your extra time off!

We start, as always, with a quick round-up of the week that was on the MoM blog. The Buffalo Trace Antique Collection 2021 arrived, as did an independently-bottled whisky from one of Speyside’s more obscure distilleries. We also heard the stories of the chemist that made France’s leading liqueur company, how Holyrood Distillery turned it around, and why Royal Salute embraced Scottish oak. We then gave some top tips for building a whisky book library before washing down all this cracking content with a Rob Roy.

Now, onto The Nightcap: 14 April edition! 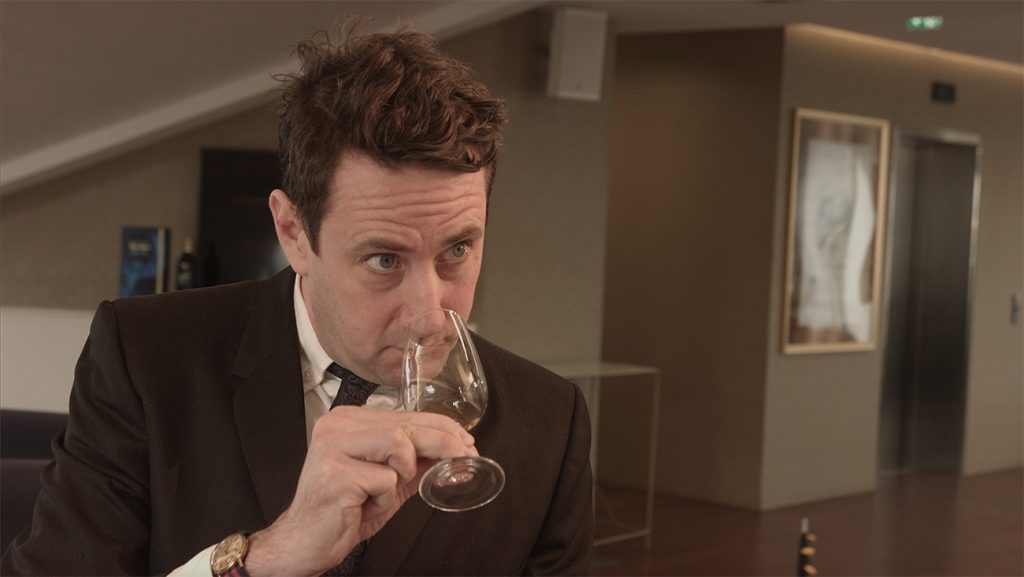 Congratulations to our own Henry Jeffreys!

Trumpets, very small trumpets, are sounding at Master of Malt towers as we have just learned that one of our own, features editor, Henry Jeffreys has been shortlisted for Drinks Writer of the Year at the Fortnum & Mason awards, the Oscars of the food and drink world. It’s for work in The Fence and World of Booze. Taking him on in this category are last year’s winner Will Hawkes, for work in Tonic and Pellicle magazines, and Felipe Schrieberg from Whisky Magazine. There’s another great whisky personality on the list as Billy Abbot has been shortlisted in the Debut Drink Book category for his The Philosophy of Whisky where it’s up against Amanda Barnes and The South America Wine Guide. Meanwhile in the main Drink Book section Dave Wondrich’s awesome The Oxford Companion to Spirits & Cocktails, Tommy Barnes’ Trouble Brewing in the Loire, and A Year in Beer by Jonny Garrett battle it out. There’s also some food stuff going on. Results will be announced on 12 May. Good luck and congratulations to all shortlisted writers. 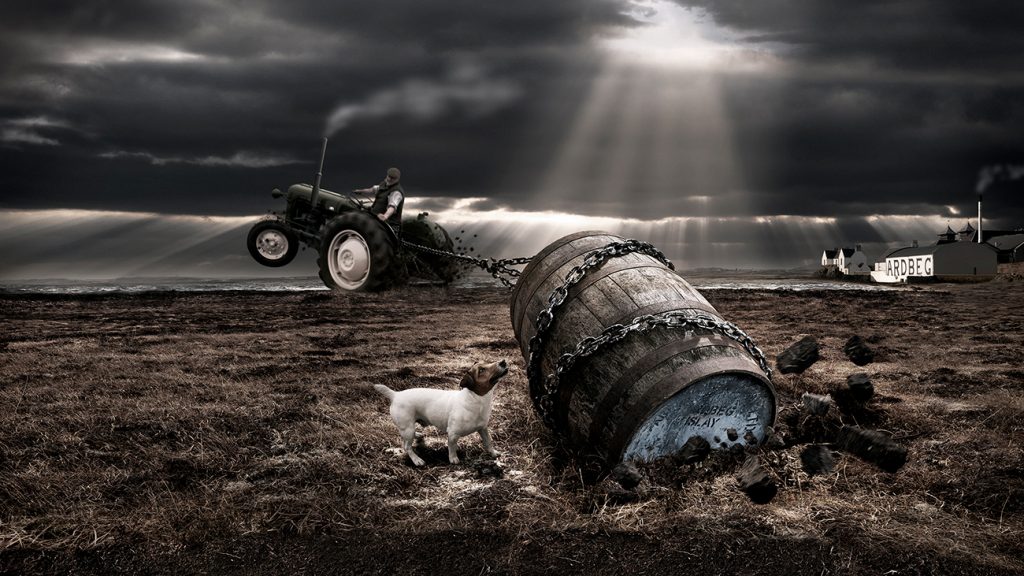 Has Ardbeg moving into the world of NFTs bothered you? We’d love to hear your thoughts.

Whisky fans may have got an email this morning that made them think some sort of late April Fools joke was being played on them, but the news is actually all too real. Ardbeg has entered the world of NFTs with BlockBar, releasing a “one-of-a-kind” whisky with the site. Just 456 bottles are available via first come, first served format on Tuesday 19 April at 10am (EST) and are priced at 1 Etherium cryptocurrency (or ETH), which works out to be $3.2k. You have to then redeem the NFT to get the actual bottle, and it’s not clear if that comes at an extra cost. It’s a shame as the whisky itself sounds really interesting. For the first time ever the Islay distillery buried two ex-bourbon barrels in the oxygen-deprived, water-rich, soggy peat bogs that surround it. “I think it’s safe to say we’ve unearthed a truly special Ardbeg here. Ardbeg Fon Fhòid is the epitome of Ardbeg – earthy, mucky, and peaty, with one hell of a nose!” says Dr Bill Lumsden, master distiller. Ardbeg Fon Fhòid won’t be a release many engage with however due to skepticism over the NFT market. Many have already shared their disappointment with the news on social media, noting that it’s a move away from responsible practice and putting whisky first. And those of that opinion will also be disillusioned by the fact that, while Ardbeg might be one of the first, it won‘t be the last distillery to jump up on this controversial train. 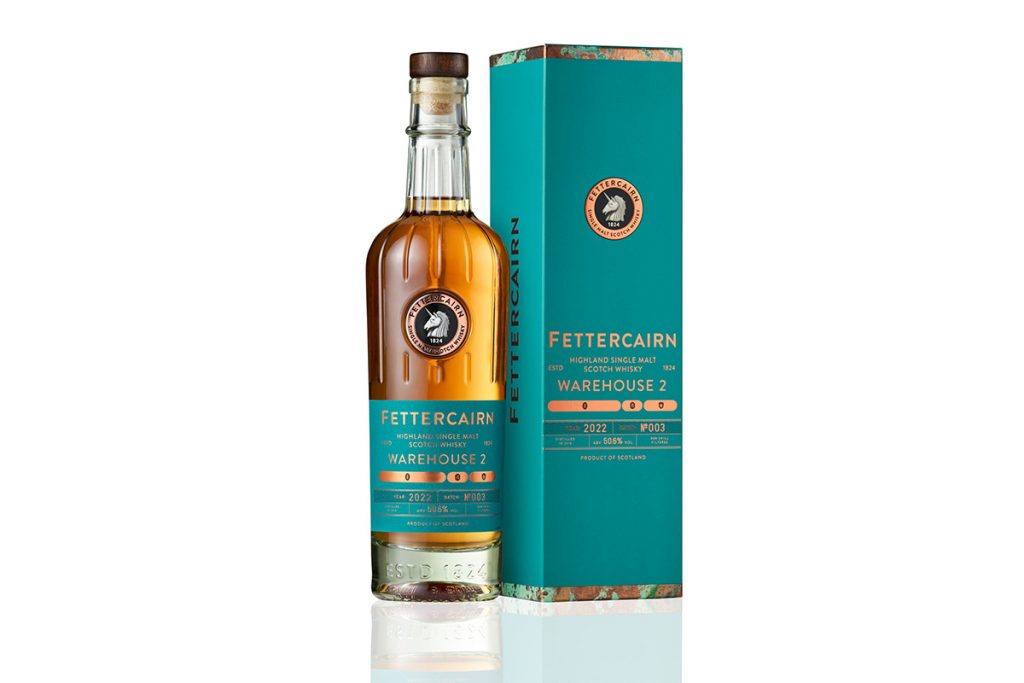 Batch 003 will be at MoM Towers shortly

Fettercairn Distillery has unveiled the third release in its Warehouse 2 Collection, and we had the pleasure of seeing how it was put together. With Whyte & Mackay whisky maker Gregg Glass and Fettercairn Distillery manager Stewart Walker in attendance, we got a sample of each cask that went into the blend, which are ex-bourbon barrels (57%), ex-rum barrels (16%), and ex-French red wine barriques (27%), and were able to see how each contributed to the final whisky. The distillery’s house style of funky tropical fruit and rich nuttiness is preserved by the bourbon cask, while the rum barrel accentuates it and adds baking spice. The barriques add flavours of dark chocolate and elevate the texture to become more full-bodied, which is also helped by its high 50.6% ABV bottling strength. It’s another good addition to a range we’re really enjoying, which is all about showcasing hidden gems found within the distillery’s dunnage warehouse where high humidity combines with the relatively cool and temperate environment to make their mark on the maturing spirit. Batch 003 is limited to just 9,600 bottles, so when it arrives here we suggest you get your orders in nice and sharp. 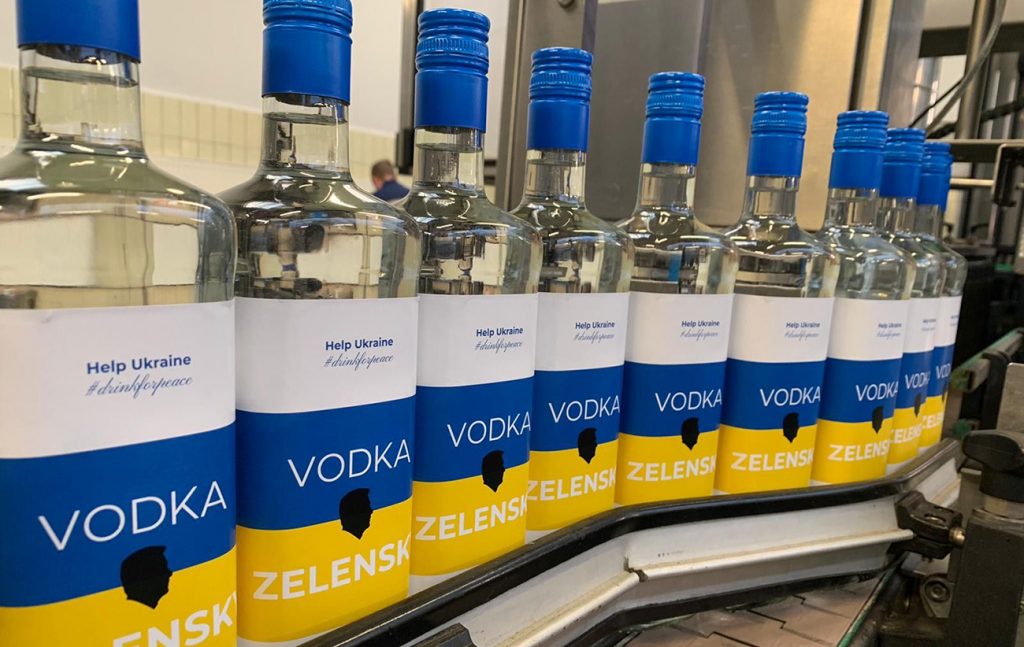 You can support a vital cause with Ukrainian vodka

A team of refugees and peace-loving entrepreneurs have come together to create a new spirit that aims to provide immediate assistance to those in Ukraine. Vodka Zelensky is dedicated to ongoing aid, donating 100% of the profits until 2026 and £5 per bottle to carefully selected NGOs in Ukraine. The brand, which discloses the audited annual reports in order to ensure transparency of the donations, has already given close to £30,000 to a children’s hospital in Kyiv. A premium wheat-based vodka made in Germany and Switzerland, Zelensky was the brainchild of fashion designer Anastasiia Rosinina, who fled Kyiv in March, and her long-time friend and Swiss entrepreneur Dr. Tobias Reichmuth (investor from Shark Tank Switzerland). They put together an expert team that took just eight days to go from the initial idea to selling the first bottle. The former head of the Swiss Agency for Development and Cooperation (SDC), ambassador Walter Fust, is even onboard to ensure the responsible allocation of the donations collected for Ukraine. You’ll notice that the bottle’s label design comes in the striking national blue and yellow of Ukraine, with the silhouette of President Volodymyr Zelenskyy also emblazoned on the label. The vodka is already being sold in Switzerland, Germany, and now the UK – with more countries to follow soon. 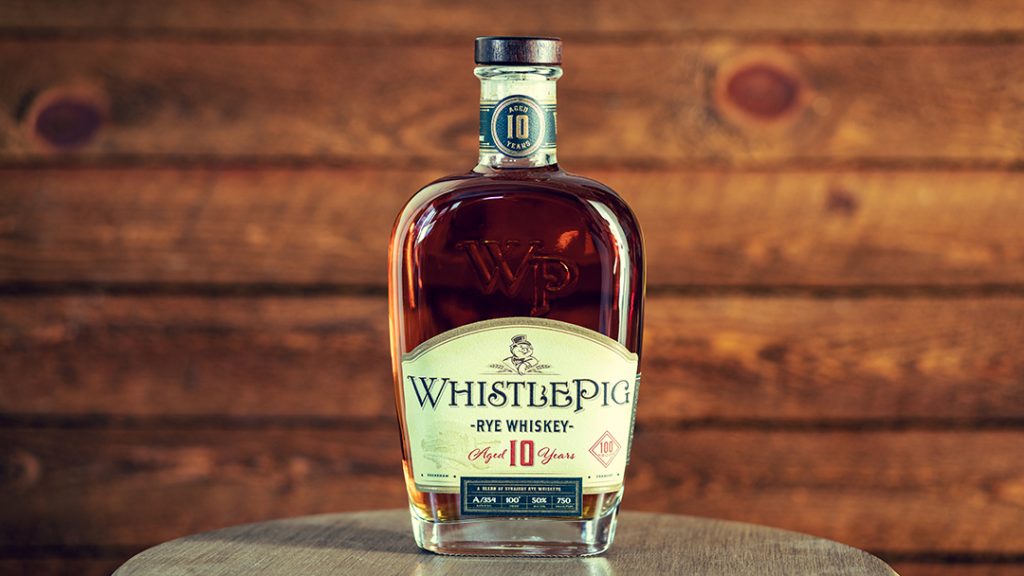 You think you’ve got the stuff? Then get mixing!

WhistlePig Whiskey has just launched its inaugural UK cocktail competition for bartenders that will see winners head to the home of WhistlePig in Vermont, USA, as part of a special VIP trip. The ‘No History No Rules’ competition invites bartenders across the country to explore the wonderful world of rye whiskey in an unconventional way, by entering cocktail creations that don’t conform to the norm. The only rule is that WhistlePig 10 Year Old should feature in the recipe. The spirit of the competition was borne out of WhistlePig’s ideology to “rip up the rye rulebook and push the limitations of the category, rather than replicating what has been done in the past”, according to the brand. Five regional heats will take place before the final, which is on Monday 4 July in London. The winners will also receive a special bottling from the distillery team in person, while the overall winner will also receive a bottle of The Boss Hog VIII. Entrants have until 15 May to submit their cocktail recipes. Best of luck to anyone who fancies the challenge!

This is just lazy, crass, and dated. Do better.

Fkng Bourbon decided to announce to the world this week that no women work in its marketing department after posting the kind of retrograde, sexist nonsense you’d hope we’d left behind by now on its Twitter page. The advert, which featured a woman lying behind a bottle of Fkng Bourbon with the caption “Be someone’s Bourbon rather than everybody’s cup of tea,” immediately attracted widespread criticism for its objectification of women, with Becky Paskin once again stepping up to best articulate the frustration many felt. “The objectification and sexualisation of women in any form of alcohol marketing has damaging, real-world consequences. This is particularly true in an industry such as whisky that has long been considered a ‘man’s world’,” she explained. “Not only does it undermine female authority, reducing us to little more than objects, it perpetuates an image of whisky being the elite drink of the gentleman’s club. The global whisky industry has progressed far beyond this kind of archaic, sexist marketing, so it’s incredibly disappointing to see a new brand enter the market with this stance.” Instead of taking their “fkng” medicine, Resist Spirits, the brand owner, responded with a statement that didn’t contain an apology or demonstrate that anything had been learned from the backlash, instead choosing a disingenuous approach of pretending it was a somehow empowering image. Just do better. This kind of marketing is nobody’s cup of “fkng” tea. 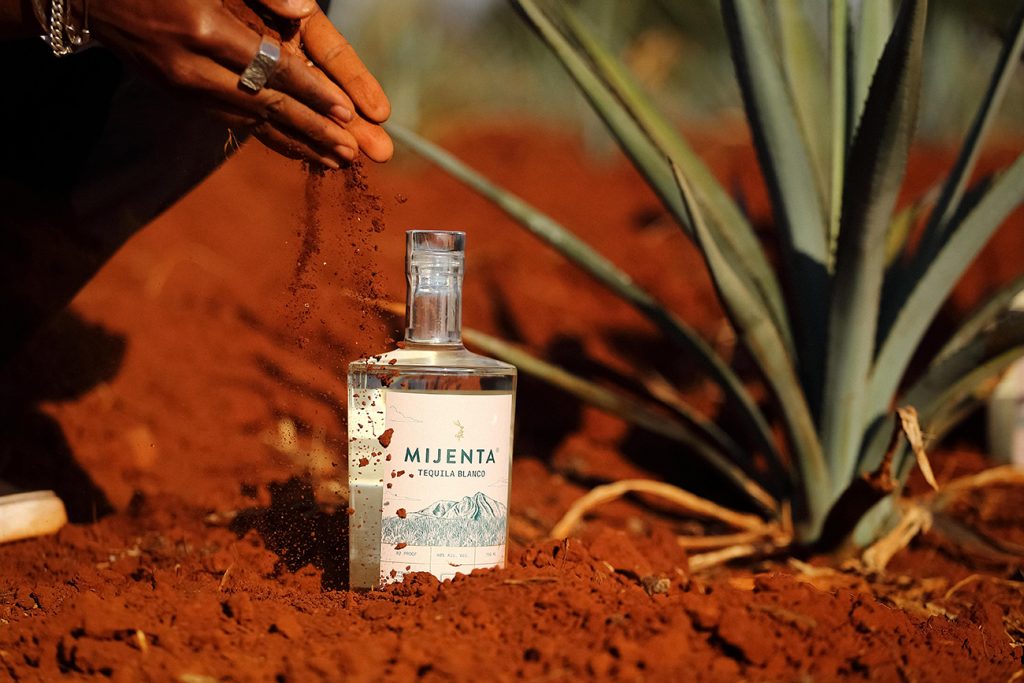 Mijenta is doing its bit once again

Mijenta Tequila and The Ocean Foundation (TOF) are teaming up with the former donating £5 from each bottle sold for the month of April in honour of Earth Month, with a minimum donation of £2,500. The foundation’s mission is to support, strengthen, and promote organisations dedicated to reversing the trend of destruction of ocean environments around the world, and the collaboration furthers Mijenta’s efforts to cultivate long-lasting practices. The Tequila brand also recently established a partnership with Whales of Guerrero, and is committed to sustainable production. The company is a carbon neutral operation and works with Climate Partner, offsetting 706T of CO2 (equivalent to planting 60,000 trees) in 2021. “Community building and sustainable issues are at the core of both The Ocean Foundation and Mijenta. We share the same commitment to preserving the environment and educating key stakeholders on important topics such as marine and land conservation, sustainable tourism, and reduction of carbon footprints,” says Elise Som, Mijenta’s co-founder and director of sustainability. “We are thrilled to further our commitment to restoring coastlines and supporting nonprofits working to restore the environment.” 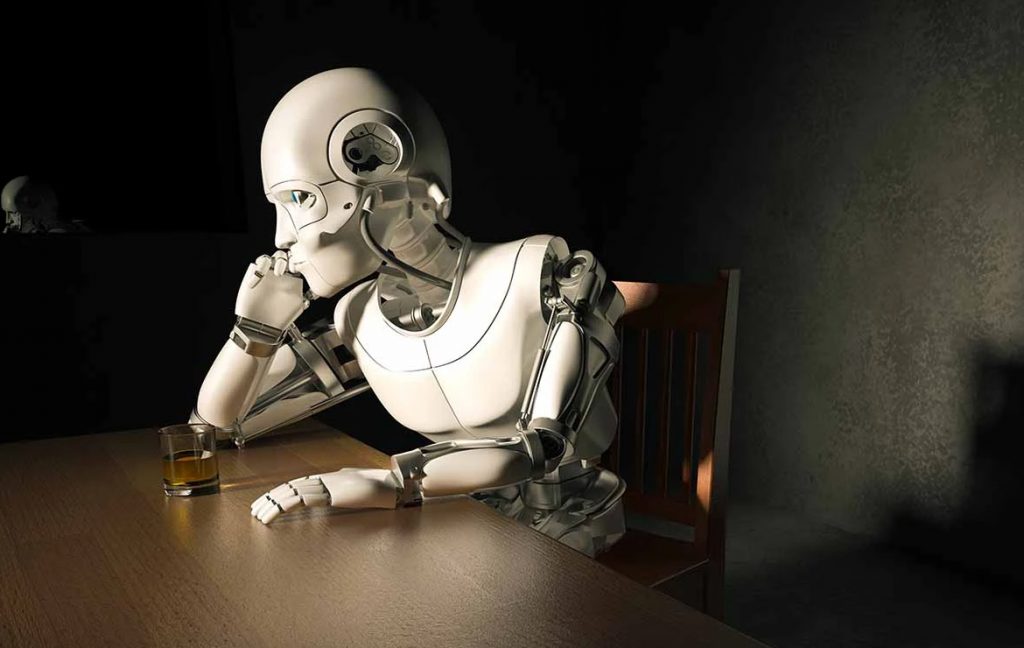 We were so busy wondering if we could, we never asked if should. Credit: mevans / Getty

A new olfactory device is here to help the whisky industry fight counterfeiters, improve quality, take this writer’s job, and, if sci-fi has taught us anything, eventually kill us all. As published this year in the IEEE Sensors Journal, the NOS.E was able to identify a brand of whiskey with more than 95% accuracy in a test run of different samples. The device mimics the human olfactory system, using eight gas sensors to detect odours and, coupled with a machine-learning algorithm, and is trained to recognise particular whisky characteristics that could be used for both quality assessment and fraudulent detection. While just published, the research actually dates back a few years. As the authors note: “The proposed e-nose solution was verified by a field testing displayed at the CEBIT Australia 2019 trade show, by reaching an accuracy of 96.15%, 100%, and 92.31% in brand name, region, and style classification, respectively.” The whiskies tested included blended and single malt Scotches, from Johnnie Walker Red and Black Label to Ardbeg, Chivas Regal, and The Macallan. Very impressive, robot. But we think people will always prefer the trusted opinion of professionals such as ourselves. Right guys? Right?!

Master of Malt @MasterOfMalt
30 minutes ago
On The Nightcap this week: @johnniewalker_ gives away 270,000 drinks, @RosebankWhisky launches its last old release before the distillery reopens, and the cheapest pint in the UK is revealed.