Master of Malt
No Comments on The Nightcap: 12 August

On The Nightcap this week: Johnnie Walker gives away 270,000 drinks, Rosebank launches its last old release before the distillery reopens, and the cheapest pint in the UK is revealed. Oh, and there’s a story about space sake. It’s a corker.

As it’s World Elephant Day today, we’re raising some awareness of the majestic creatures by giving you the chance to win some goodies from Elephant Gin. We’d also like to take a moment to discuss some of our favourite massive mammals, such as Batyr who supposedly had a vocabulary of more than 20 human phrases, Tai, star of films Larger than Life and Water for Elephants, or even the talented Ruby, a resident at Phoenix Zoo who made paintings, the most expensive of which sold for $25,000. What amazing animals.

If you’d like to know more about Elephant Gin’s commitment to conservation then look no further than the MoM blog, which has been home to some truly excellent articles this week. From Nick’s staggering epic on Southern Comfort to Jess’ sublime examination of the work/life balance of a brand ambassador, it’s a been banner week. The likes of Takamaka Rum, Angel’s Envy, and Gattertop spirits, also have great stories worth telling, so we told them, before welcoming a new batch of Aberlour A’Bunadh and whipping up some cracking flavoured rum cocktails with Project #173. If you don’t have time for that, then we’ve recommended some cracking pre-bottled cocktails too.

Now, let’s crack on with The Nightcap: 12 August edition! 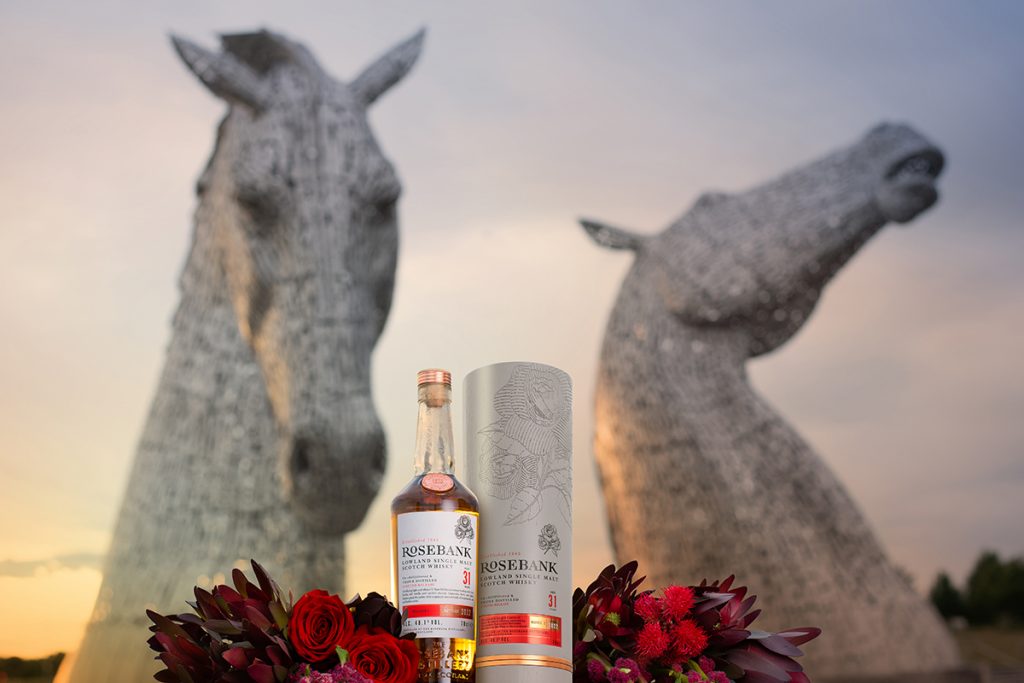 ‘New Rosebank at the ‘Kelpie’ structures in Falkirk

As the ghost distillery nears revival, Rosebank has stoked excitement by launching a rare 31 Year Old bottling drawn from casks salvaged before the distillery’s untimely closure in 1993. The Lowland malt, which is set to reopen its doors in early 2023, is the first to be released under Malcom Rennie’s tenure as distillery manager, and he says he’s under no illusions as to the importance of this launch. “It fills me with great pride to know that the 31 Year Old will be the last ‘old Rosebank’ release before the distillery is reopened to the public. The revival of this sleeping giant is a huge moment for the whisky community, but most importantly for the people of Falkirk who have patiently awaited its return for three decades.” Rosebank 31 Year Old, which was bottled at 48.1% and is priced at RRP £1,800, is said to retain a bright and zesty nose despite its age, with hints of lime and lemongrass. This light, vibrant profile is then tipped to continue onto the palate, where mint and chamomile are met with more robust notes of leather and banana bread. The distillery then says the dram finishes with long herbal notes, sweet peaches, and a hint of oak. To celebrate the launch, the distillery filmed the first sip at the nearby ‘Kelpie’ structures in Falkirk by four leading whisky commentators: Becky Paskin, Brad Japhe, Moa Nilsson, and Thijs Klaverstijn. Our invite was tragically lost in the mail. Right, guys? Right? 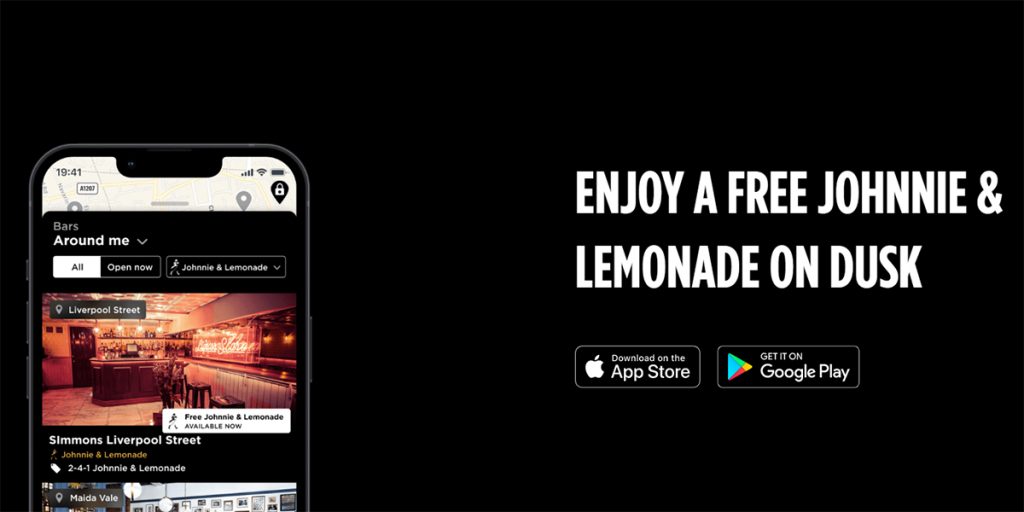 Johnnie Walker is set to give away 270,000 drinks FOR FREE over the next year. After partnering with nightlife discovery app Dusk to tap into its audience of 800,000 users, the world’s biggest selling Scotch whisky will be handing out Johnnie & Lemonades at participating UK venues. Of course, it will be worth the investment, as the campaign is expected to drive £4 million in revenue for the venues involved via a 12.5% uptick in sales of Johnnie Walker Black Label. That doesn’t particularly excite us (rich brand makes more money, woohoo…) but the idea of the new Johnnie & Lemonade serve to invite potentially millions of people into the wonderful world of whisky is very welcome. The Dusk app offers its users the chance to claim one free drink a day, as well as provides exclusive offers throughout the year. Craig Watt, senior brand manager for Johnnie Walker, says that “Dusk is the perfect digital partner to invite people to try this simple serve; providing consumers with inspiration and supporting the trade by driving footfall and boosting revenue for bars up and down the country.” That all sounds great. As does a free drink. 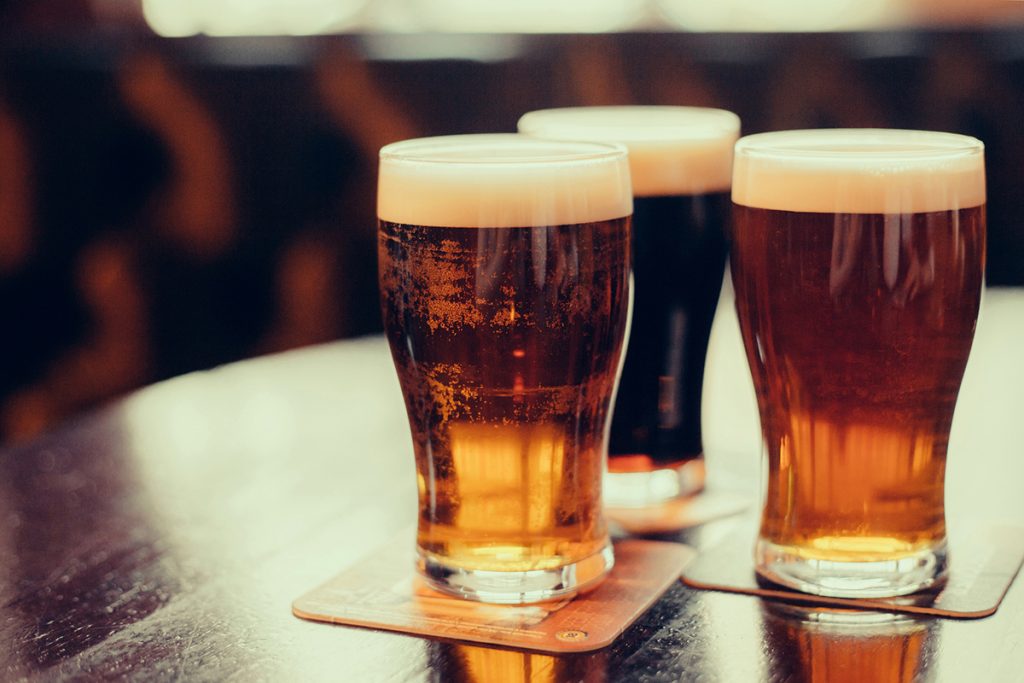 The cheapest pint in the UK is…

Did you know that a recent YouGov survey found that more than half of UK adults now believe that the cost of a pint is unaffordable? In London, it’s not uncommon to be charged above £7. Which is an absolute bloody disgrace. But we all know that’s as bad as it gets. So, in this era of the cost of living crisis, where is the cheapest pint in the UK? The Drinks Business reports that comparison site Finder put together the list using data complied by Numbeo, a crowd-sourced consumer price database, and Expatistan, a cost of living calculator. That’s a lot of outsourcing and work to get this result but regardless, we have an answer. Which is… a tie. Not an actual tie serving pints, but a draw between Derby and Inverness with an average price of £3 (is it me, or is Inverness always the answer on these things? Why aren’t we living near Inverness?). An absolute bargain. Mind you, the highest average price on the list of 20 was £4, in Ipswich and Exeter, so nobody is shaming themselves on this list. Unlike the capital. Have a word with yourself, London… 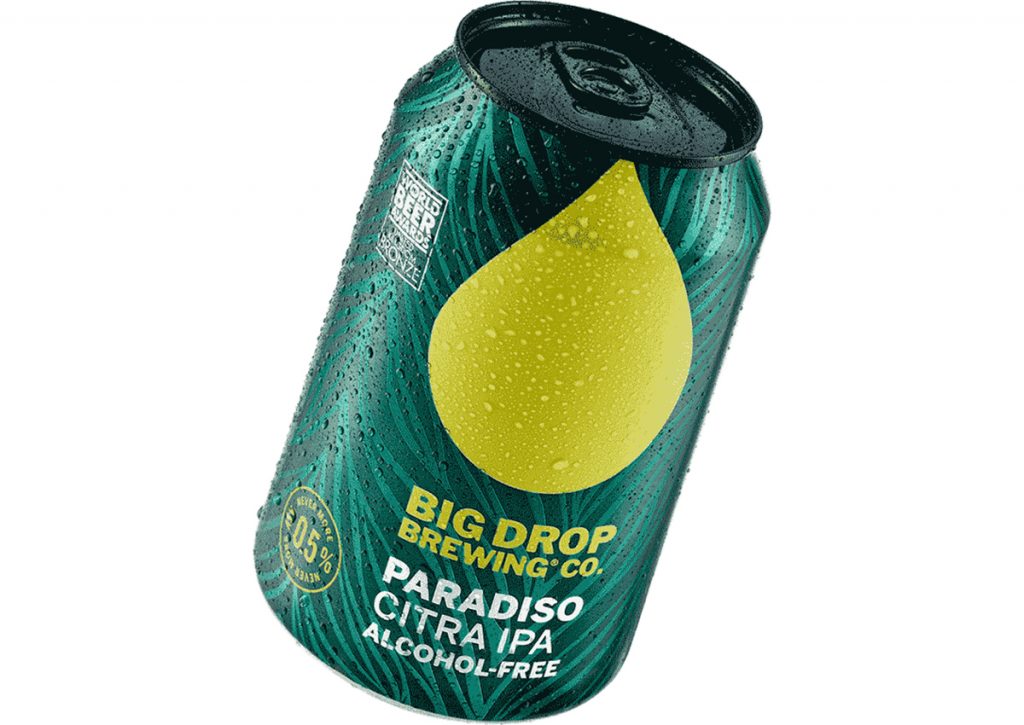 Everyone who has been desperately waiting for the world’s first alcohol-free cask pale ale can finally relax because Big Drop has come through for you. The booze-free brewer, founded by former City lawyer Rob Fink and school-friend James Kindred in 2016, has made a 0.5% ABV Citra IPA called Paradiso, the first beer of this style to be made without alcohol. It’s also vegan-friendly and gluten-free. Now Big Drop can offer those who prefer not to imbibe a pretty comprehensive range of low-ABV offerings, with a variety of ales, lagers, and stouts. Neil Walker, head of communications at The Society of Independent Brewers, called the new cask ale launch Big Drop’s “boldest and most exciting” venture to date and Paradiso will be presented to the world at London Craft Beer Festival tonight and tomorrow. So if you’re there, don’t miss out! 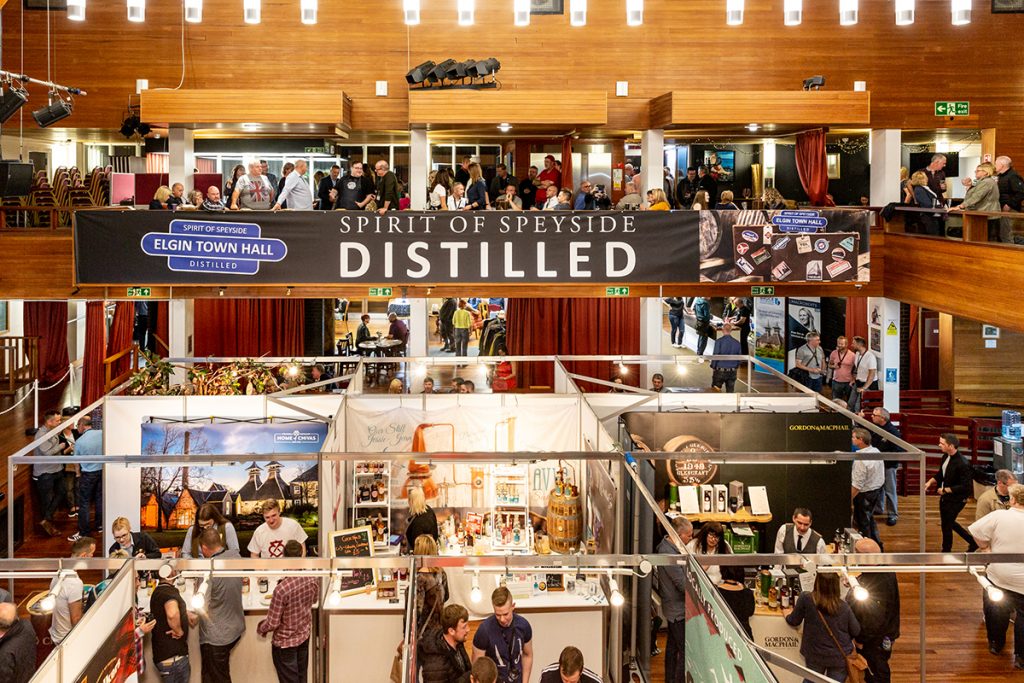 The last time Distilled ran, back in 2019

Some of the world’s best distilleries will be joined by local brewers and food stalls under one roof at the beginning of next month as Distilled returns. The three-day showcase of the very best Speyside has to offer, organised by the team behind The Spirit of Speyside Whisky Festival, is one of the world’s largest whisky events, which is why it’s so good to see it back for the first time in three years (can you guess why there was an absence?). In fact, the organisers had to whack on an additional day to the usual two-day festival to cater to demand, which means Elgin Town Hall will host Distilled from Friday 2 to Sunday 4 September. Over 1,500 visitors are tipped to enjoy the three days of festivities, which includes several masterclasses like The Glenlivet Single Cask Tasting and Exploring the Breadth and Depth of Connoisseurs Choice from Gordon & Macphail. “Although relatively new, the event has cemented itself as a popular date in the local calendar and after a three-year break we are making the final preparations to ensure that this year’s Distilled is bigger and better than ever,” says George McNeil, chairman of the Spirit of Speyside Festivals. “We are certain that tickets will sell out quickly, so I’d advise everyone to snap theirs up early to avoid disappointment.” Tickets for general admission, and the classes, are available to purchase now from here. 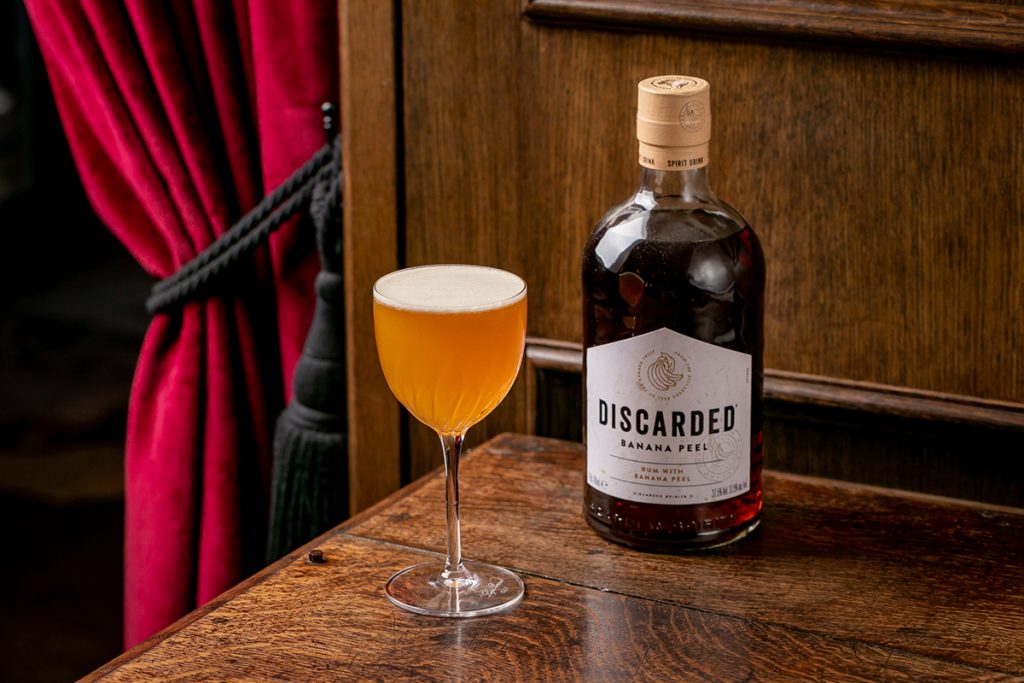 Henson’s Bar has a new menu. We ventured to the Soho drinking destination at Mimi’s Hotel to try bar manager Francesco Delfino’s tribute to travel, as the collection aims to take guests on a journey across Europe, South and Central America, Europe, and Australasia, through the spirits used in the cocktails. “This menu showcases some of my favourite destinations across the globe, through the spirits used in each cocktail,” Delfino says. “After being stuck inside for over two years, we wanted to celebrate some of the amazing established and smaller brands that the world has to offer.” We took a trip to Mexico with the Mex Break, which combes Ocho Reposado Tequila and Bruxo X Mezcal with Cacao Tempus Fugit and cinnamon syrup topped up with cold brew coffee soda and comes with the pleasure of watching your bartender pour thick layers of rich coffee foam out of a nitro dispenser. We also ventured to Copacabana beach, with the light and fruity Third Summer, made from Brazilian Vitória Régia, elderflower, pineapple, lime, and sugar. But the highlight for me? BananaRuma, made with Discarded Banana Peel Rum, Market Row Rum (two great choices already), as well as banana, sugar, and lime. Delfino captures that estery, authentic banana note you get from great rum beautifully. It’s well worth the trip. 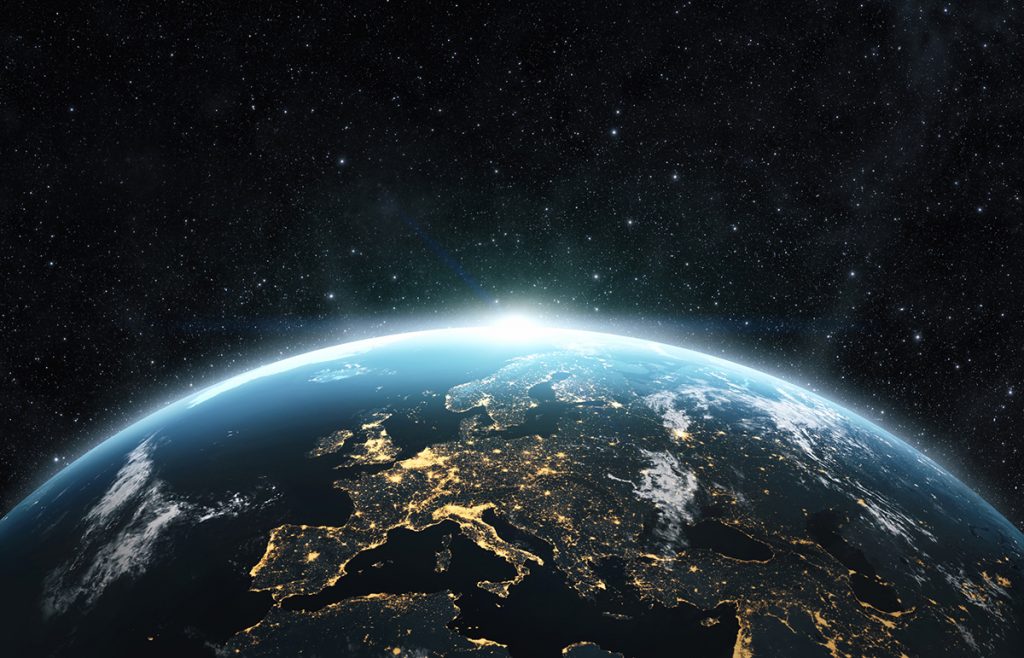 The sake went where few of us will ever go. Hong Kong.

And finally… a sake from space touches down in Hong Kong

A few years ago we made a gin by sending its botanicals into the final frontier. I don’t know why that works, but it’s bloody delicious. So it’s exciting to see that sake from Kōchi prefecture, Japan, that was sent into space has returned home. In fact, this sake is doubly cool, because it was made using yeast that not only spent time aboard the Russian Soyuz space station in 2005, but also six kilometres down in the depths of the ocean. The yeast was then used by members of the Kōchi Sake Brewers Association to create ‘Tosa space/deep sea sake’, which was unveiled at a restaurant in Hong Kong last week. The lucky diners noted there was something unusual about it, according to Japanese broadcasting corporation NHK, with one saying “the taste and texture are special, it’s different from what I usually drink”. Fujimura Rina, of the Kōchi Prefectural Government, says the hope is that this creation would “help generate interest in what Kōchi has to offer”. Sending sake to space is one way to do that. Amazingly, this is the second space sake story from this year, after a brewery in Japan’s eastern Fukushima prefecture created a similar product back in March to raise money to help the region recover from a devastating earthquake.

Master of Malt @MasterOfMalt
11 hours ago
Read up on this year's spirit sales trends in @DrinksRetailing News! Whisky is doing well, and we've recorded big increases in the Tequila and rum categories, with some superb single cask bottlings, and high-end releases hitting the market.
https://t.co/eyxBPVWGOJ
View on Twitter
3
9