Master of Malt
No Comments on The Nightcap: 10 September

What to expect from this week’s round-up of boozy news: Midleton’s new rye whiskey, CAMRA’s plea to us to drink better cider, and the promise you can drink more if you exercise. It’s all in the Nightcap: 10 September edition!

What we love about the British summer is just when you think it’s over and autumn has definitely arrived, it’ll return for an encore. We’re making the most of the sunshine because before you know it, the darkness and gloom of winter will be here. But we need not be too sad because there’s a drink or drinks for every season. We’re looking forward to putting away the cold lagers, Margaritas, and Gin and Tonics, and moving on to the hot toddies, sherried single malts, and, best of all, lashing and lashing of Port. And to read with your seasonal beverages? Why, there’s always the Nightcap. Those winter months are just going to fly by.

Before we get stuck into the news from the world of booze, we have to tell you about all the excitement on the blog this week. And we mean excitement. The week began with a look at the long-awaited Johnnie Walker brand home on Princes Street in Edinburgh. Then Henry toasted the start of a new week with four limited-edition whiskies from Bunnahabhain, Deanston, Tobermory, and Ledaig. New columnist Lauren Eads spoke to Shannon Tebay, the first American to run the American Bar at the Savoy, while Adam knocked up Snoop Dogg’s favourite cocktail, the Gin and Juice. Ian Buxton returned with a look at the lost world of Australian and New Zealand whisky. Then we wrote about the oldest Japanese whisky ever released, a Yamazaki 55 Year Old! But that’s not all because Adam has just come back from Glenmorangie’s experimental new distillery. All in one week!

Now it’s on with the Nightcap: 10 September edition! 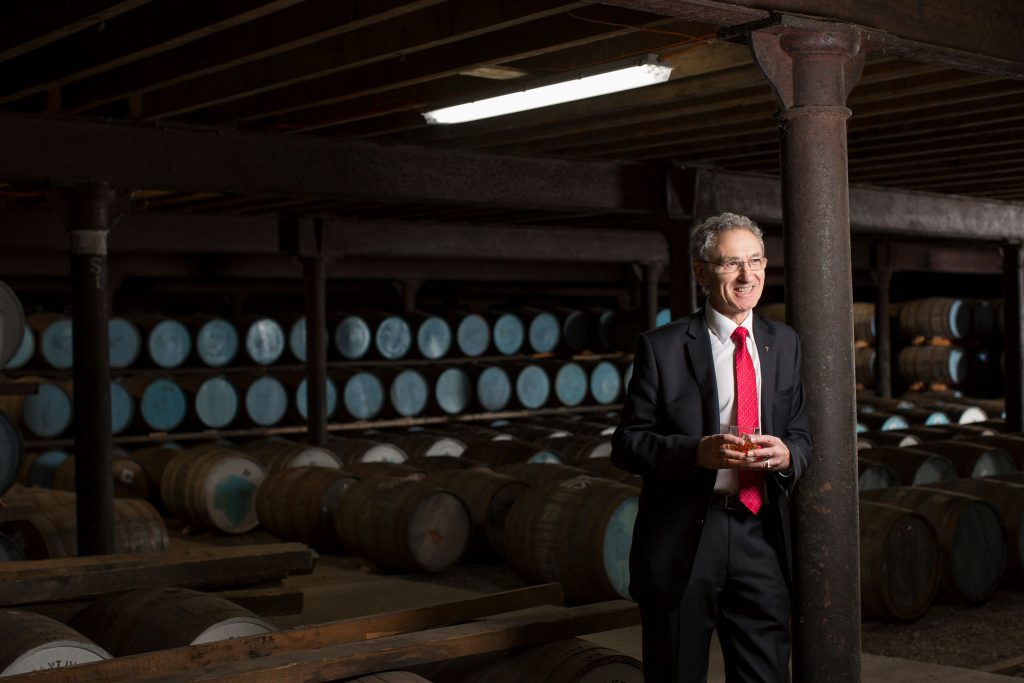 Glen Grant sure knows how to mark an anniversary. The Speyside distillery is celebrating master distiller Dennis Malcolm’s six decades in the business with a 60-year-old single malt Scotch. The aptly-named Dennis Malcolm 60th Anniversary Edition comes from a single ex-oloroso Sherry cask, #5040, which was filled on 24 October 1960, making it the distillery’s oldest bottling in its 181-year history. It will launch globally in October this year and is made up of just 360 decanters designed by Glencairn Studio housed in a presentation box made from sustainable walnut. Each case is engraved with Malcolm’s signature and comes with a certificate of authenticity, signed by the master distiller himself. All this for €25,000. Malcolm was actually born at Glen Grant in 1946 and followed in his father and grandfather into the industry as an apprentice cooper when he was 15 years old. His work in whisky earned him recognition from Queen Elizabeth II in 2016, when he was named an Officer of the Most Excellent Order of the British Empire (OBE). Bob Kunze-Concewitz, CEO of Campari Group, which owns Glen Grant, paid tribute to “the career of a true Scottish gentleman and globally recognised Scotch whisky craftsman,” adding that “Dennis has not only created some of the most-awarded single malts in the world, but also serves as an unwavering champion for the industry”. Hear, hear. Cheers to you Dennis! 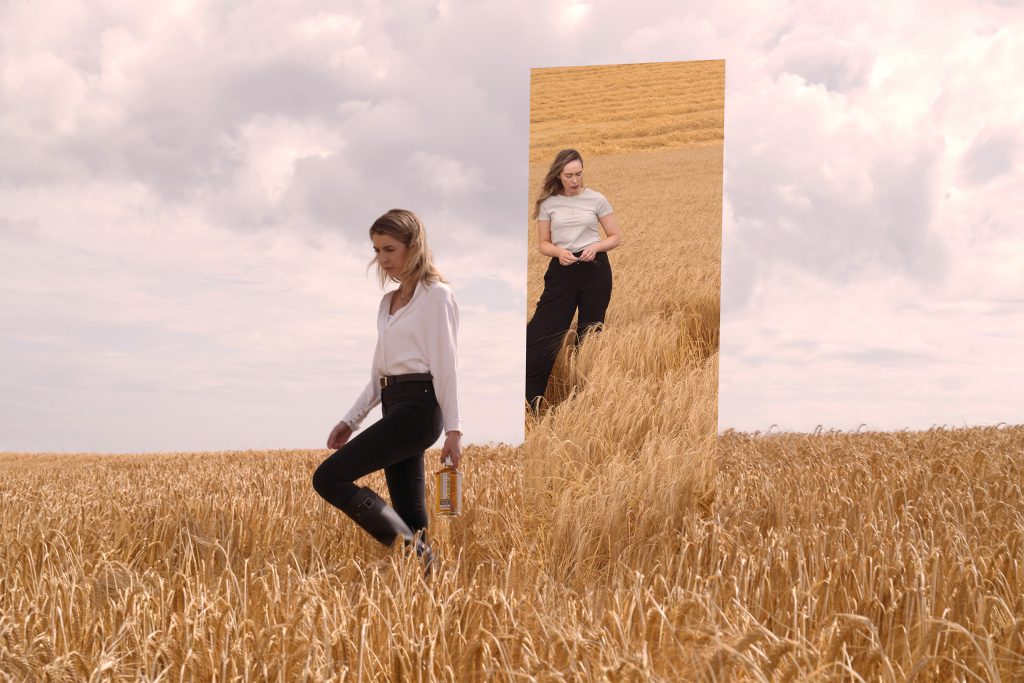 Midleton Method and Madness Rye and Malt is here!

When we visited Midleton near Cork a couple of years ago, the highlight of the tour was the on-site experimental Micro Distillery. Now the first release from this hotbed of innovation is here and it sounds like a cracker. Called Midleton Method and Madness Rye and Malt, it was created by Katherine Condon who joined Irish Distillers as a graduate trainee back in 2014. It’s apparently inspired by 1857 notebooks from John Jameson III who was using rye at the time. Condon explained: “We have been inspired by the innovators in Irish whiskey who came before us. In turn, we have questioned tradition and challenged convention to follow their inspiration and drive the Irish whiskey category forward for a new generation of creators, consumers, and indeed, suppliers.” The mashbill is 60% rye and 40% malted barley. After fermentation, the grains were double-distilled, before going into ex-bourbon casks. It’s bottled at 46% ABV  with an RRP of €95. As massive fans of a) rye whiskey b) the Midleton distillery, to say we are excited would be an understatement. We’ll report back when we’ve had a little taste. 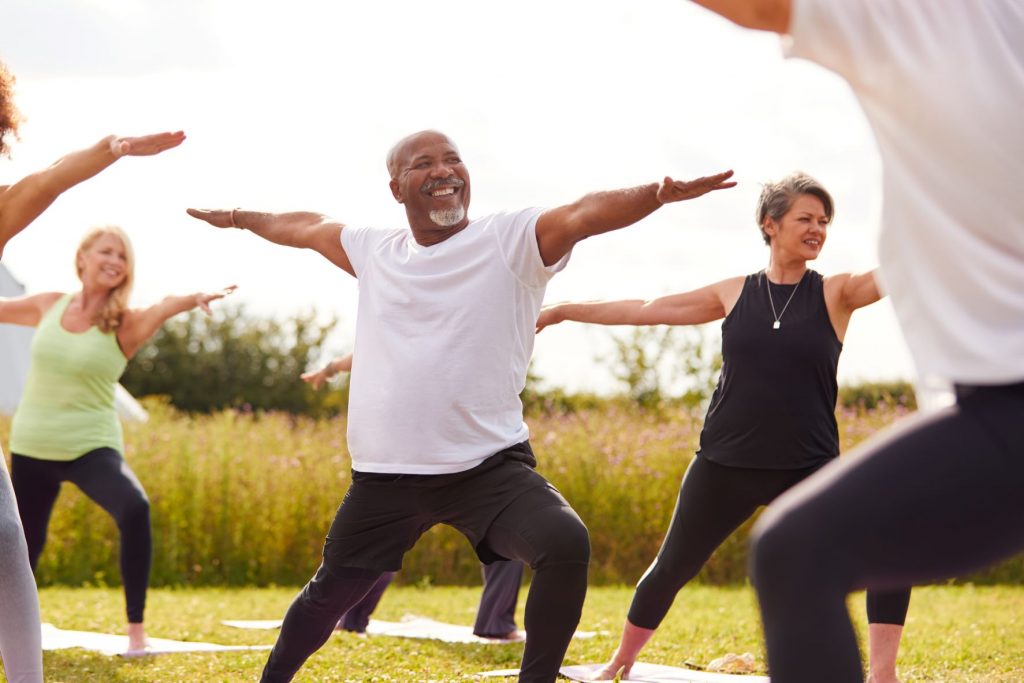 More of this and you can drink more of the good stuff, claim scientists

Fitter people can drink more and handle their booze better

Higher fitness levels are significantly related to greater alcohol consumption, according to a new study looking into people’s exercise and drinking habits. Regular exercisers drink more alcohol, but are less likely to be problem drinkers as stated in new research that appeared in Medicine & Science in Sports Exercise from a study at the Cooper Clinic in Dallas. According to the research, which looked at data from 38,000 healthy patients ranging in age from 20 to 86, there is a strong link between exercise and alcohol habits. The findings showed that “women within the moderate and high fitness categories had greater odds of moderate/heavy alcohol consumption in comparison to their low fitness counterparts. Similarly, moderate and high fit men had greater odds of moderate-to-heavy alcohol consumption in comparison to the low fitness group”. In addition, men who were heavy drinkers all displayed “higher fitness levels were related to lower rates of suggested alcohol dependence,” stated the findings. The subjects’ fitness was estimated with a treadmill test to exhaustion and transparency about their drinking habits, ultimately revealing how higher levels of cardiorespiratory fitness are related to increased alcohol consumption management among adults. In a similar study conducted by the University of Notre Dame, recent research found that people with a lower percentage of body fat will have lower ‘Blood Alcohol Concentration’ (BACs) than those with a higher percentage of body fat, debunking myths suggesting that if you are overweight you can handle your drink better. 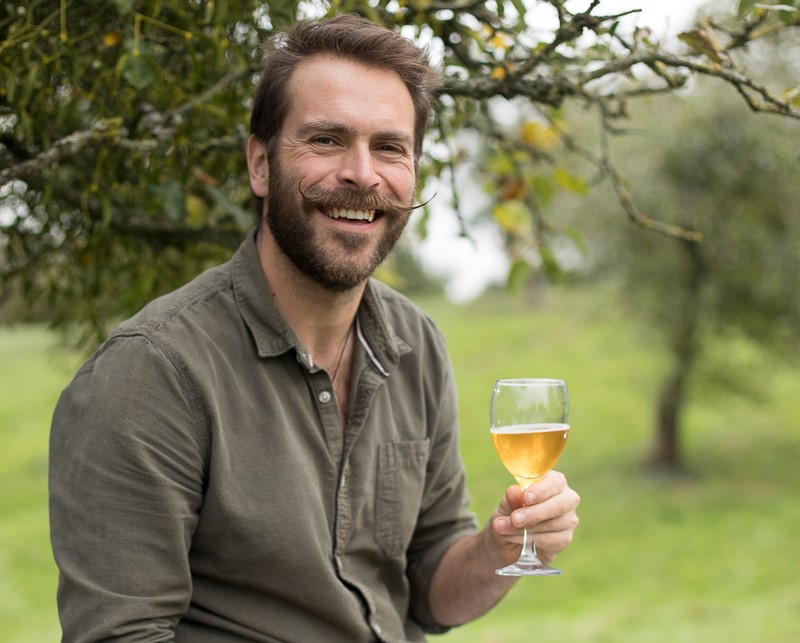 CAMRA (the Campaign for Real Ale) has teamed up with Gabe Cook, aka the Ciderologist, to try to get legislation changed to protect Britain’s independent cider makers. They are going to send a copy of Cook’s latest book Modern British Cider to all 70 MPs who sit for cider-making constituencies. The aim is to get them to change some of the laws governing cider and taxation in the UK. One is to introduce a progressive cider duty so that smaller cider makers looking to expand above the current 70hl duty exemption size won’t get clobbered. Next, they want to make ingredient labelling compulsory so that customers will know exactly what goes into their cider. Hint, it’s often not apples. At the moment ciders only need to be made from 35% apples, the rest of the alcohol can come from sugar. Many ciders are little more than apple-flavoured alcopops. So finally CAMRA and Cook are calling for a minimum 50% apple content in cider. In France, it’s 80%. Cook said: “I hope this book lends a voice to these causes and readers will join my calls to support the industry. Britain is blessed with so much cider heritage, which we desperately need to conserve, but also wonderful innovation, fun, and boundary-pushing boldness which we need to nurture. There truly is a cider for everyone.” It sounds like a worthwhile campaign. It should be more of a scandal how little apple content there is in most British ciders. 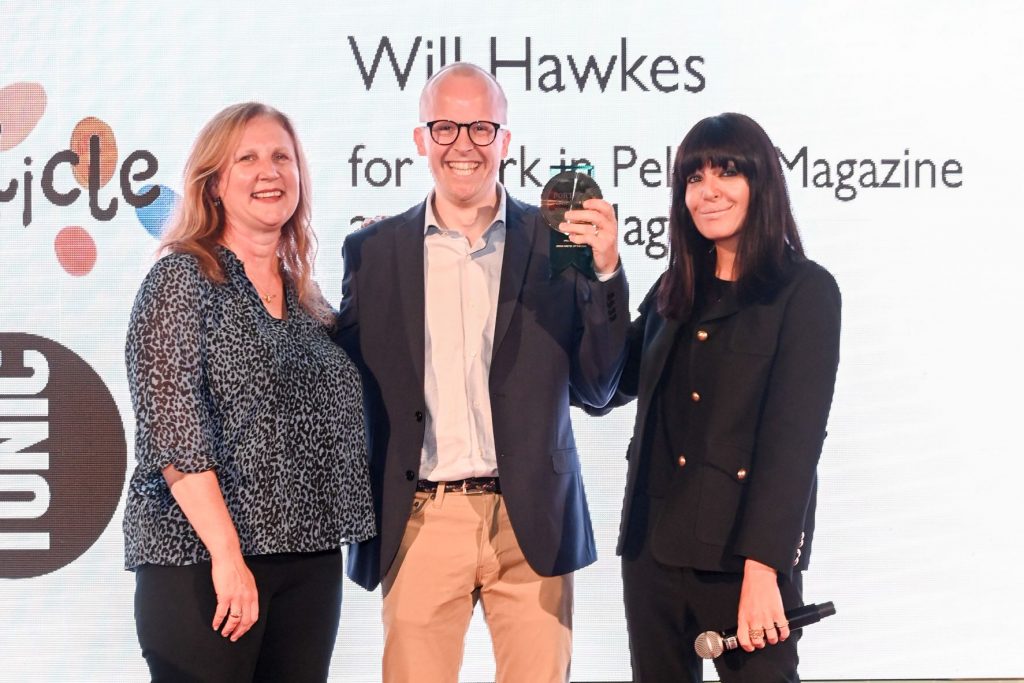 Congratulations to Will Hawkes (he’s the one in the middle)

To the glittering Royal Exchange outpost of Fortnum & Mason for the annual celebration of great food and drink writing. All the stars were there: Grace Dent, Claudia Winkleman, Stanley Tucci (!), and somehow Master of Malt managed to bag an invite. We were delighted that Will Hawkes won drinks writer of the year for his work in Pellicle and new drinks magazine Tonic. We were especially pleased to see Hawkes staying on brand by celebrating with a glass of beer rather than the Champagne that everyone else was knocking back. Man of the people. Another popular winner was Cas Oh for his snazzy cocktail book Co Specs which we covered on the blog earlier this year. It was great to catch up with him and discover that he’s as charming and stylish as his book. He snapped up the debut drinks book award while the main drinks book award went to Wine Girl by Victoria James. There were also some food awards with Fay Maschler, Jimi Famurewa and James Martin among the winners. Go here to see the full results. A great time was had by all and somehow we managed not to corner Stanley Tucci and bore him about how to make the perfect Negroni, though we did go a bit starstruck over Grace Dent.

A new campaign for Monkey Shoulder has a revolutionary idea: whisky might help first dates be a bit less stuffy. In a bold move, William Grant & Sons’ mixable malt brand has enlisted Community actor and The Soup host Joel McHale to hit the streets of New York City to help daters drop the pretension and relax – preferably with a glass of Monkey Shoulder. The ‘Stick it to Stuck Up’ campaign attempts to remove the snobbery surrounding whisky as well as dating. It features McHale wearing a plaid suit with crystal lowball glass in hand playing “a person who’s trying way too hard to impress you,” before chucking the glass offstage and stripping down to a casual sweater. “To enjoy your whisky, you don’t need some guy with a handlebar mustache spewing a bunch of pompous tasting notes,” he quips. Anyone taking notes? As a part of the initiative, daters have the chance to have McHale crash their first dates by sharing stories of their most stuffy and stuck-up dating experiences. Go here to enter the contest. Not that anyone here at Master of Malt needs any assistance in the dating world. Now where’s my cravat, I’ve got a hot date tonight. 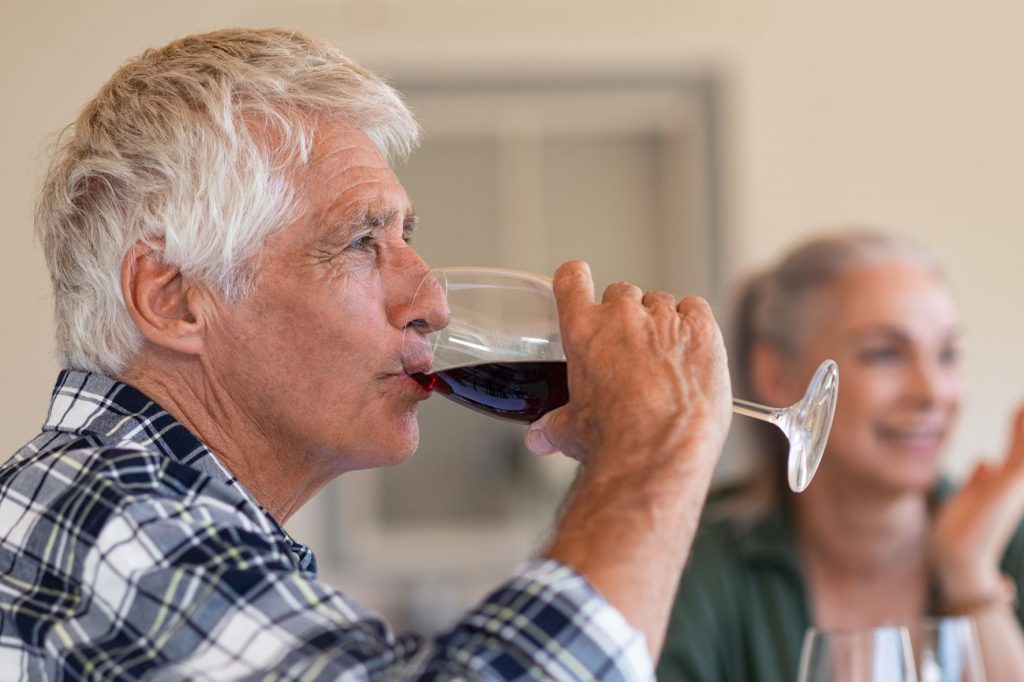 Did you spend lockdown doing this? You’re not alone

Did you learn another language during the many lockdowns? Or maybe get round to clearing the garage or grouting the bathroom? We didn’t do anything quite this dramatic but we did learn to make a killer chip shop curry sauce (the secret is to add apple, oddly). The other thing we did was drink better wine more often and it seems we weren’t alone. Bordeaux Index has just released figures showing that 75% of British wine drinkers saw their consumption of fine wine rise. Not only that but apparently 29% think of themselves as connoisseurs – presumably,  to paraphrase Basil Fawlty, they know a claret from a Bordeaux. It’s all great news for Bordeaux Index which has seen its wine and spirit sales increase by 44%, year on year. Director Matthew O’Connell explained: “Today’s findings show that the pandemic has significantly changed our approach to the way we consume fine wine, and the increasing desire to aspire to drink better at home. We have seen this in our own UK business, and interestingly have observed broadly similar patterns across our Asian and US offices.” He added that, if you can resist drinking the stuff, wine can be “a great investment option and we are seeing more and more investors enter the space.” As rumours fly of a fourth lockdown in the pipeline, or perhaps fifth, fine wine merchants across the country will be bracing themselves for deluge of orders.

Inside the Lighthouse, Glenmorangie's innovation hub