Last month we took a trip to the beautiful Wiltshire countryside to visit Ramsbury Estate which grows (almost) everything needed to make gin, vodka, beer and so many delicious snacks.

If you want to start making gin, there’s an easy way and a hard way. You could order a little Portuguese still on the internet for £500, get a licence, buy neutral alcohol, some botanicals and off you go. You can make very nice gin this way. Or you can buy a farm, grow your own wheat, ferment it, equip a distillery with an expensive column still to make neutral alcohol, distill your gin and then use the leftover botanicals to cure meat which, of course, you have raised on your farm. No prizes for guessing how they do things at the Ramsbury Estate in Wiltshire.

The estate covers around 20,000 acres and it’s owned by a Swede called Stefan Persson. He’s not the most high profile billionaire but the chairman and main shareholder of H&M, he’s not short of a bob or two. When I visited in April, I was shown around by the estate manager Alistair Ewing, head of marketing and sales Will Thompson and Mats Olsson, who used to work with Absolut Vodka. The estate employs 25 people not including the pub staff.

We began the day with a pint of Ramsbury bitter at the pub on the estate, The Bell at Ramsbury. This was followed by a superb meal cooked by chef Oli Clark using ingredients from the estate as much as possible. To finish we had a Gin & Tonic pudding made with, naturally, Ramsbury Gin. 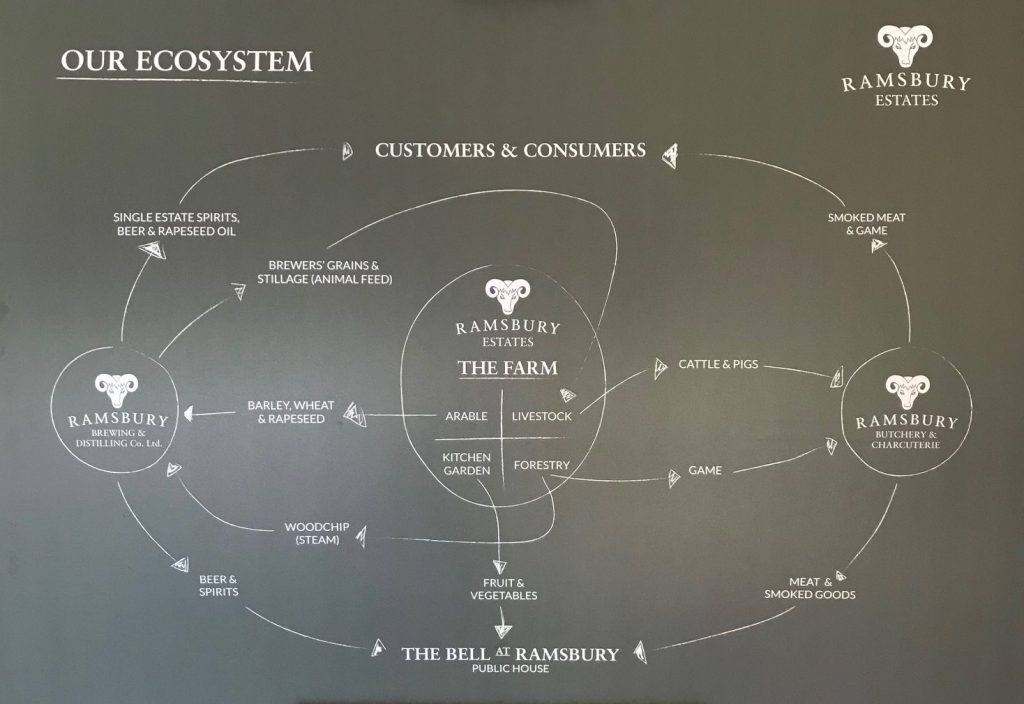 The Ramsbury ethos in diagram form

“We are a farm that has a distillery”, Ewing explained to me. He then outlined all the activities that take place on the estate in addition to spirit manufacture. There’s brewery which produces a variety of traditional English beers brewed from estate-grown barley. Apparently the soil isn’t good for hops growing so Kentish hops (with some Czech and New Zealand hops) are used instead. There’s cattle and pigs as well as game like deer and pheasants. The estate produces cold-pressed nutty rapeseed oil and grows rye to be used as biofuel. Waste goes into anaerobic digester, and water used in the distillery and brewery is filtered through reed beds. Not all the sustainable practices have worked: “We tried to reuse yeast waste from fermentation to make bread but the results were revolting”, Ewing told me.

Then it was off in the Land Rover for a tour of the estate with Ewing pointing things out to us in his deadpan Devonian burr. Seeing a hare galloping across the Wiltshire hills on a bright April day was a magical sight. When we couldn’t see any pigs, Ewing said, “they probably had a fight with a badger”. Less amusingly, he pointed out ash trees that are dying from a fungal disease. He expects to lose about 90% of the ash on the estate. These will be cut down and put in a wood chipper to be used as fuel. 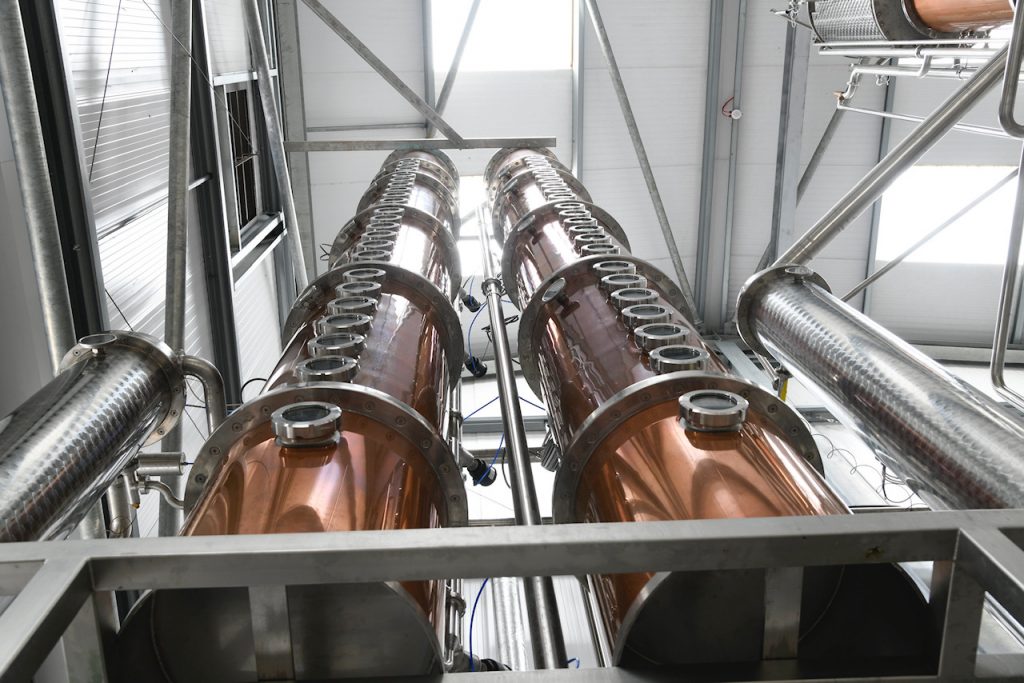 After the tour, we had a quick look round the brewery (and yes, some beer) before the main reason for the trip, the distillery! And what a set-up they have! Distiller Dhiraj Pujari showed off his kit: Dominating the room is a 42 plate column still and to the side two pot stills. The neutral alcohol is made from wheat grown on the estate, fermented with a distillers yeast. The wash is first distilled in a pot still and then the low wines go through the column to create a 95% spirit. The fact that they have a pot still means that a whisky is a possibility though they haven’t produced any new make yet. Ewing told me that team are currently experimenting with making casks out of local oak which they might use to age their own whisky.

The gin is a classic London dry style partly distilled using juniper growing outside the distillery though they do buy in some too. Other botanicals include cinnamon, orange, lemon, and quince (which comes from the estate). Barrie Wilson, owner of Scotch and Limon, knocked up some drinks including Gin and Tonics and delicious beetroot Martinis, which were a meal in a glass. All the time snacking on delicious meats cured by smoke from leftover botanicals. Other products include a fruity, peppery vodka and a damson gin.  Your bottle will you not only when your spirit was made, but also when the cereal was harvested and which part of the estate it came from. Can’t get more local than that?

All this commitment to sustainability and localism doesn’t come cheap. According to Ewing, the estate owner “takes a long view on profit”. But Ramsbury Estate is much more than a rich man’s plaything. “We are custodians of the land”, Ewing said, “we’re not doing anything people weren’t doing 300 years ago. . . Except with more health and safety.” 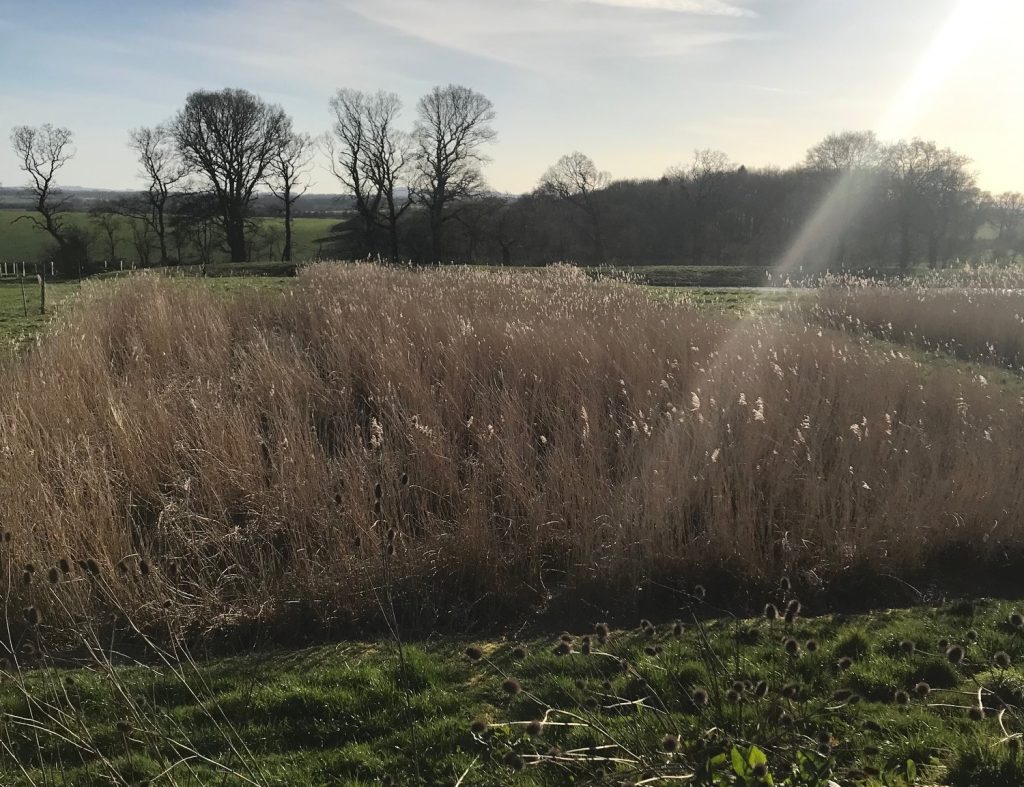 Master of Malt @MasterOfMalt
16 hours ago
Looking for something to bring some zest to your glass on a January evening? We've sniffed out a selection of flavoursome finds and brought them all together right here. The very definition of convenience, surely.

Master of Malt @MasterOfMalt
23 hours ago
Looking for a Burns Night dram and love Islay #whisky? Snap up a bottle of Aerolite Lyndsay and enjoy a fab smoky single malt!