Master of Malt
No Comments on The Nightcap: 9 July

It’s Friday, work is over (or nearly), which means it’s time for another round-up of all the news from the world of booze. We’ve got sustainable cocktails, sustainable Bentleys, and a row over Russian Champagne. They’re all in the Nightcap: 9 July edition!

Apparently there’s some sort of sporting jamboree going on this weekend. Something about football coming home?? So we imagine that many of our readers will be glued to the telly on Sunday night. Luckily, there’s still time to order a selection of tasty beverages to heighten your viewing pleasure. For those with no interest in the Euros, there’s always Wimbledon, the Tour de France, and cricket. Or if you don’t like sport, you could go for a walk, read a book, learn a foreign language, or just pour yourself a drink and settle in with another edition of the Nightcap.

On the blog this week

It was another rocking week on the Master of Malt blog. First off, we got very excited about the arrival of a new exclusive whisky from the Lakes Distillery called Miramar. And so did you, seemingly, as it all sold out in under an hour. Whoosh! Then Lucy Britner looked at what you can do with white Port beyond adding tonic water. Ian Buxton gleefully looked at great whisky marketing disasters like the ill-fated launch of Bailey’s whiskey and Cardhu Pure Malt. Meanwhile, Millie Milliken screamed ‘spring break!’ and showed us to make the Sex on the Beach cocktail. We enjoyed a candid chat with Stephen Davies from Penderyn about Jim Swan, Jim Murray, and how everyone laughed when he wanted to make whisky in Wales. They’re not laughing now. And finally, because getting abroad is far from easy at the moment, we rounded up the 10 best drinks to transport you to faraway lands.

Meanwhile over on Clubhouse

If you’re a fan of Tequila and mezcal, then head over to the Clubhouse app on your portable telephone device at 3pm today, Friday 9 July. Kristy Sherry, Alejandro Aispuro, Richard Legg, and Michael Ballantyne will be discussing whether 2021 is going to be the year of agave. What do you think? Yes? No? A little bit?

Now, it’s on with the Nightcap: 13 July edition! 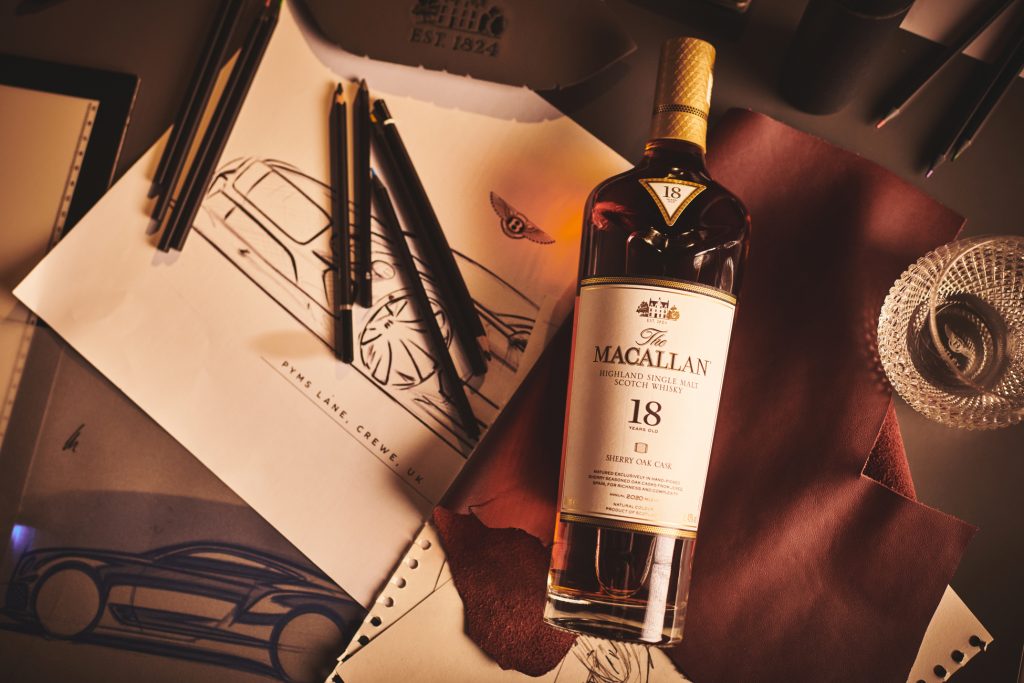 Macallan and Bentley team up for some reason which will become clear at some point, probably

First Bowmore teamed up with Aston Martin, and now there’s more whisky/ automotive synergy as this week Macallan announced a new collaboration with Bentley. Because cars and booze go so well together. It’s all a bit vague at the moment but according to the press bumf, the two companies share more than rich histories and even richer customers. Both are, apparently, big on sustainability and are going to help each other become carbon neutral. MD at Macallan Igor Boyadjian explained: “A key focus of the partnership will be our commitment to a more sustainable future. The breath-taking natural landscape at The Macallan Estate provides the perfect platform for us to embark together on this exciting and extraordinary journey.” Bentley’s chairman and chief executive Adrian Hallmark added: “Transforming Bentley into the world’s most sustainable luxury car company is an exciting journey, and I’m delighted to be working with The Macallan with one common goal – to both lead our fields as we work towards a more sustainable future.” We’ll let you know when there are more specifics but from this week’s press release, it’s clear that neither brand is short of wind power. 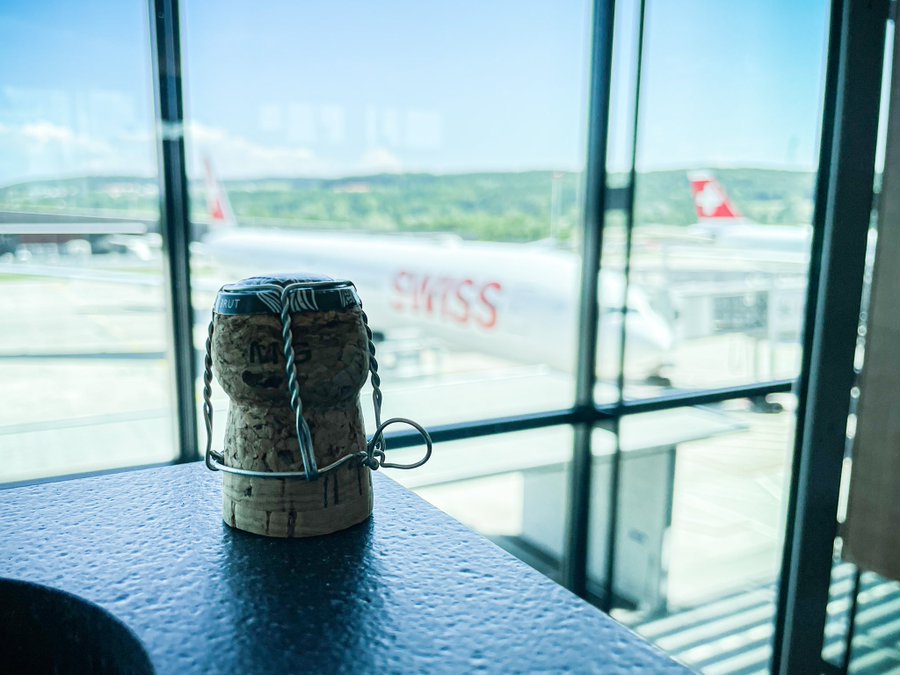 If you thought the worlds of Taittinger and Bitcoin wouldn’t collide, then you clearly weren’t at the CoinGeek conference in Zurich a few weeks ago. A bottle of the Champagne was popped by Kurt Wuckert Jr, CoinGeek’s chief bitcoin historian (a real job title, we’ll have you know) at the closing of the conference live on CoinGeek TV – rather handily, it was caught on film. The NFT (non-fungible token) version of this cork (which is basically just a photo, as far as we can tell) then sold for 69 Bitcoin SV. Oh, you don’t know what that means in legal tender? Thank goodness, neither did we – it equals around $8,500. That’s also known as around £6,200, which is how we measure things over here at MoM Towers. Yes, that’s a lot of money for a digital file of a photo of a cork, but the net proceeds are being donated to PROPEL, a charity which helps support children’s education. That’s all rather heartwarming, except now the new owner of ‘The Cork’ (as it’s now known) is trying to resell it here for 2,180 Bitcoin SV. We’ll leave you to work out the inflation on that… Alternatively, if you don’t have big money to blow, you could just treat yourself to a bottle of the good stuff right here!

Win a whole cask of rum with CaskShare

It’s World Rum Day on 10 July. It’s also Piña Colada day and Teddy Bear Picnic Day. Why not combine the three by making Piña Coladas for your teddies and serving them on a blanket al fresco? And soon, if you take part in Caskshare’s new competition, you could have plenty of rum to share with all your bears. The online spirits marketplace has teamed up with Scotland’s North Point Distillery to offer a whole cask of rum for one lucky customer. All you need is purchase a share of rum (prices start from £40) between 7-31 July, and then bang on about it on social media (full details here). You’ll be entered into a draw to win a one year old firkin of rum containing about 72 bottles worth £2,400. Think how many Piña Coladas you could make with that. And if you’ve got any left over, it’s National Mojito Day on 11 July. So much to celebrate! 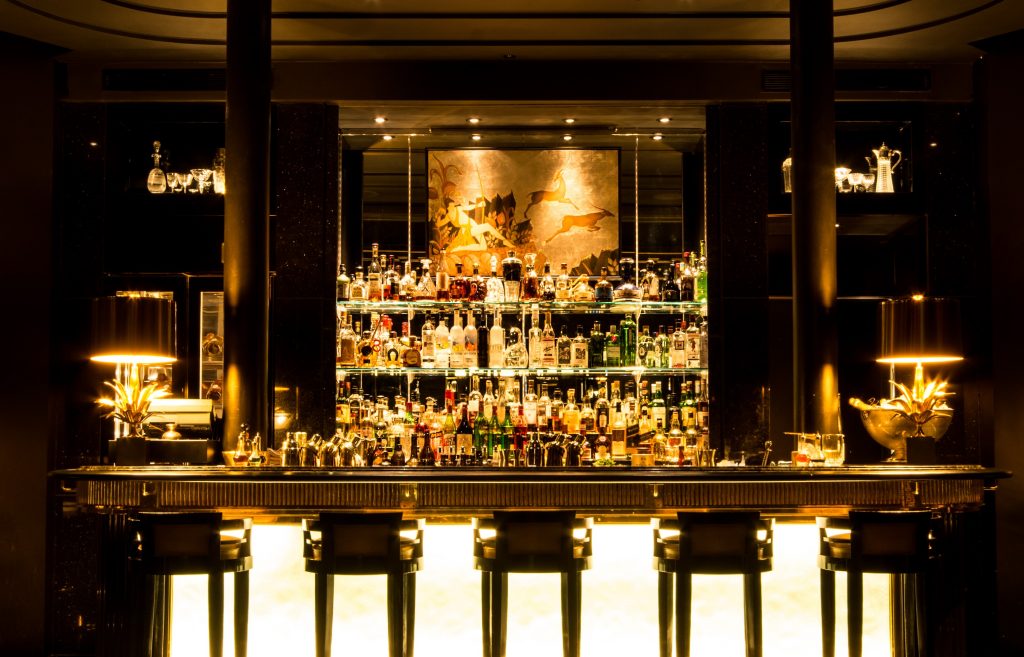 Drinks are often shouting about which far-flung corners of the world their ingredients are from, but the newest cocktail from The Savoy does the opposite. The Co-Naissance cocktail, developed by senior mixologist Cristian Silenzi, is all about local flavours and ingredients, and we were lucky enough to give it a taste at the Beaufort Bar (above). A combination of Portobello Road Gin, and locally-foraged elderflower from Little Venice and fig leaves from Embankment Gardens, is topped off with re-carbonated Champagne that would otherwise have gone down the drain. These local ingredients don’t just show off London’s flora – the cocktail eliminates packaging and waste, and removes single use glass, thus eliminating more than 1.8kg of C02 emissions per cocktail through both waste reduction and reforestation. The Savoy is also planting one native tree in the endangered Kalimantan rainforests of Borneo for each Co-Naissance cocktail served. Needless to say there’s no garnish, though the sublime glassware hardly needs it. As you’d expect from The Savoy, the cocktail itself is a delight, and much more herbaceous than we expected it to be, carried on waves of light florals. If you find yourself on the Strand and fancy doing some good while enjoying a delicious drink, you know where to head. 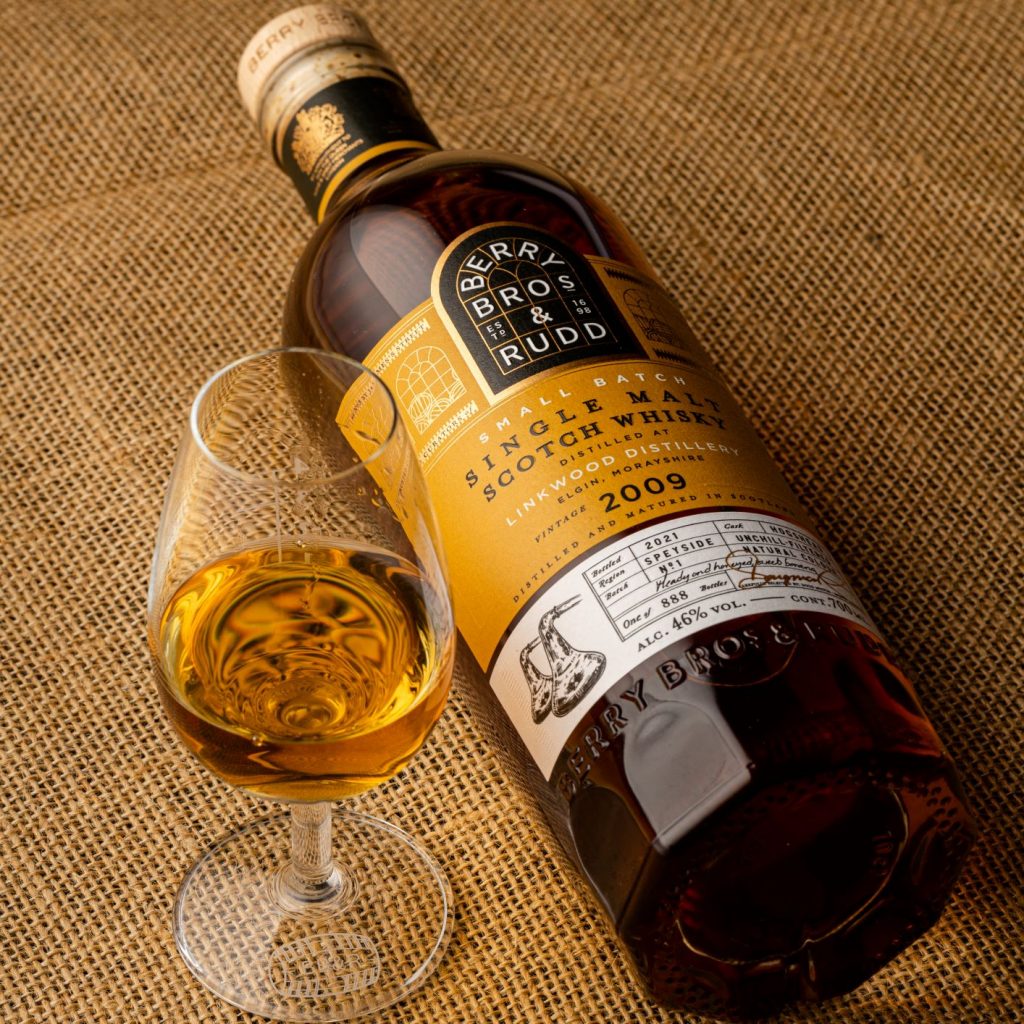 London-based Berry Bros. & Rudd, Britain’s oldest family-owned wine and spirits merchant, has launched its summer 2021 spirit range, revealing its first ever bespoke bottle in its 323 years! Designed by Stranger & Stranger, the new bottle will be used across the entire range moving forward. Indeed, some new bottles have already landed at Master of Malt. So, what’s new? The shop windows at its home in No.3 St. James’s Street are the inspiration for the label design – easy enough to recognise if you’ve been lucky enough to visit the charming shop. What’s more, each label boasts different levels of detail as customers move through (well, up) the price range. Lizzy Rudd, Berry Bros & Rudd chairperson commented “I’m delighted that after over 300 years, we are opening another new chapter for our prestigious spirits range. The new packaging and advertising draws upon and respects our heritage, whilst celebrating who we are and what we stand for today.” A snazzy new campaign full of lifestyle films and images accompany the launch as the brand looks towards world domination expanding its appeal in the China, Germany, USA, and UK markets. 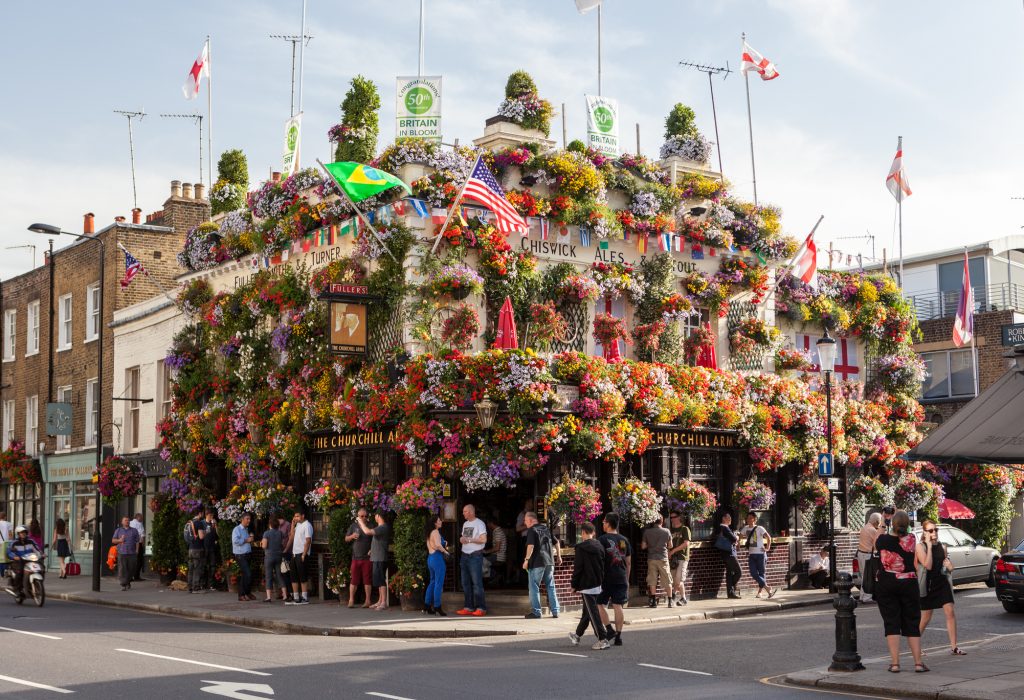 Churchill Arms in Notting Hill, hopefully there will be some free nibbles on 18 September

Here’s a good idea to help Britain’s pubs, bars and, restaurants which have been having a hell of time recently: A National Hospitality Day. Rather like Record Store Day but with more booze. It’s taking place on 18 September and those taking part will put on special events, menus, entertainment and even free nibbles. Free nibbles? We are there. Hospitality Action is the force behind this new initiative. Chief executive of the charity, Mark Lewis explained: “On one amazing day, we’re going to spark the mother of all parties – and all to help the businesses that have been thrown to their knees by Covid-19, and the people who work in them.” Go to the National Hospitality Day website for more information. By supporting, you’ll not only be helping your local, but also raising money for four charities: The Drinks Trust, Hospitality Action, The Licensed Trade Charity, and The Springboard Charity. Let’s hope some of Britain’s brewers get behind this worthwhile initiative and, most importantly, it gets people back down their local. Though remember, a pub isn’t just for National Hospitality Day, it’s for life, so make sure you keep going back, even when there aren’t any free nibbles. 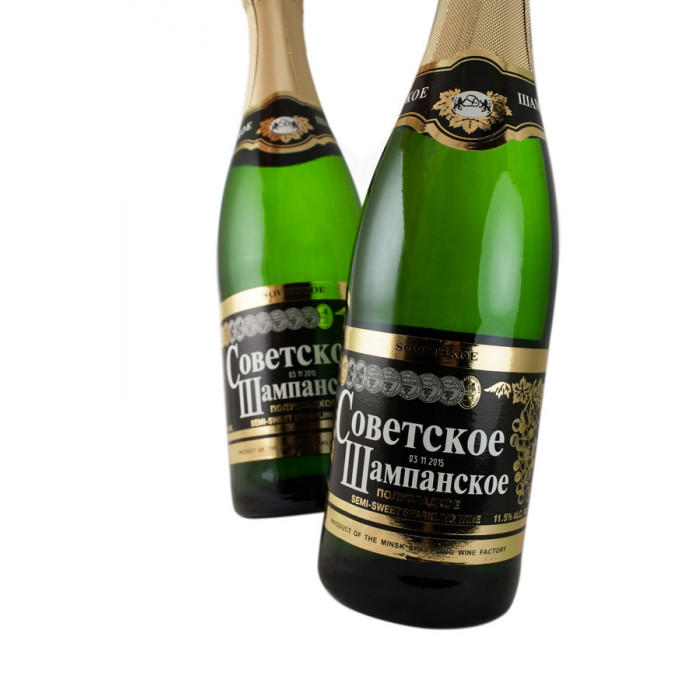 Proper Russian Champagne, none of that French muck

You might think Champagne (the wine) comes only from Champagne (the place in France) but the Russians have other ideas. A new law passed by Vladamir Putin’s government says only Russian producers can label their products ‘shampanskoye’ (worth reading this explainer on the background to the story). Makers of the original French stuff can keep the word ‘Champagne’ on the front label but on the back can only call their product ‘sparkling wine.’ As you can imagine, the French are not happy with protests from French agriculture minister Julien Denormandie and, at one point Moët Hennessy, announced it was suspending exports to Russia. However, someone high up in the company, probably, pointed out how lucrative the Russian market is because the (French) Champagne giant changed its mind and announced: “The Moët Hennessy Champagne houses have always respected the law in place wherever they operate and will restart deliveries.” Money talks, that’s one thing they can agree on in Moscow and Paris.