Millie Milliken
No Comments on Cocktail of the Week: The Sex on the Beach

This week Millie Milliken dons her visor and heads to 1980s Fort Lauderdale, Florida, to find out the origins of the Sex on the Beach [adult content warning]

‘Spring break’, a cultural phenomenon that started in the 1930s might be unknown to us Brits but it’s a bikini and budgie-smuggler-clad right of passage for most young Americans partying their way into adulthood. Every March, thousands of college students descend on the Sunshine State’s many beaches to partake in the holiday’s festivities: sun, shots and insalubrious antics are had by all.

It feels only natural then that the Sex on the Beach cocktail, rumour has it, was invented during one such sun-drenched and saucy spring break. Traditionally made up of vodka, peach schnapps, orange juice and cranberry juice, the drink – usually served to look like a sunset – is typically presented in a hurricane glass and topped with a wedge of pineapple or a slice of orange, a glacier cherry and a jaunty cocktail umbrella.

These days you’re most likely to see it featured on large, laminated menus alongside Piña Coladas (a personal favourite) and Long Island Iced Teas (again, not complaining). So, who invented the ’80s classic you wouldn’t want to order in front of your parents? 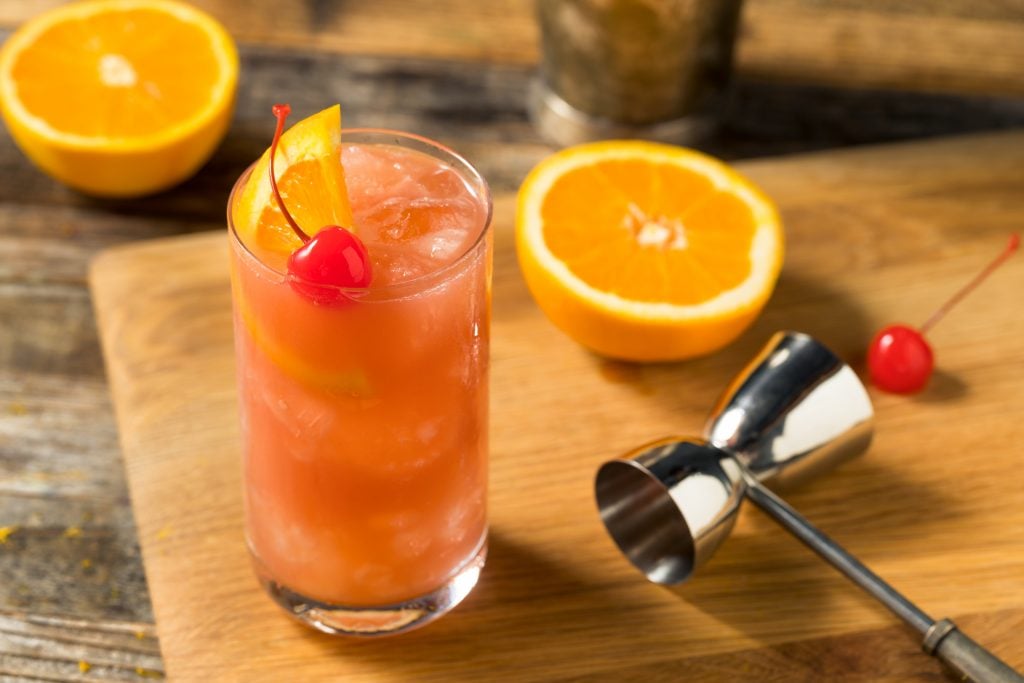 “I’ll have a Sex on the Beach” lol

The story goes that in 1987, a company called National Distribution launched a new product – peach schnapps. As a way of selling their new liquid, they launched a competition in Fort Lauderdale during the famous party season, asking bartenders to create a cocktail using it. One bartender was Ted Pizio of Confetti Bar. He mixed the schnapps with vodka, grenadine and orange juice and the partygoers loved it. When Pizio was asked to name his cocktail, his mind went straight to what he believed the Spring Breakers came away to Florida to do… and so, Sex on the Beach was born.

While this is the most accepted story, eagle-eyed cocktail nerds have disputed this being the drink’s origin story, noting its appearance in the American Bartenders School Guide to Drinks (published in 1982). In this version of events, it’s believed that the Sex on the Beach was actually created when a bartender combined a Fuzzy Naval (peach schnapps and orange juice) and a Cape Codder (vodka and cranberry).

Don’t you want me?

Whoever invented in, Sex on the Beach quickly achieved global fame, helped by T-Spoon’s 1997 song of the same name, the Sex on Beach. But it has not been immune to modernisation. Perhaps the most notable version is the Woo Woo, basically everything except the orange juice and a lime wedge garnish instead of pineapple or orange.

The most obvious change over the years has been the transition from grenadine to cranberry juice, while some recipes also call for the addition of pineapple juice for a slightly more tropical taste. A dash of raspberry liqueur is also a popular riff – think Chambord, Tiptree (of jam fame) or St George.

Then it’s the look. Some bartenders choose to mix the ingredient together punch-style before serving (as opposed to layering a combination of cranberry and vodka over the top of orange juice and peach schnapps). Glassware too has changed, from a Hurricane to a Highball, and more simple, low-key garnishes have come into favour. 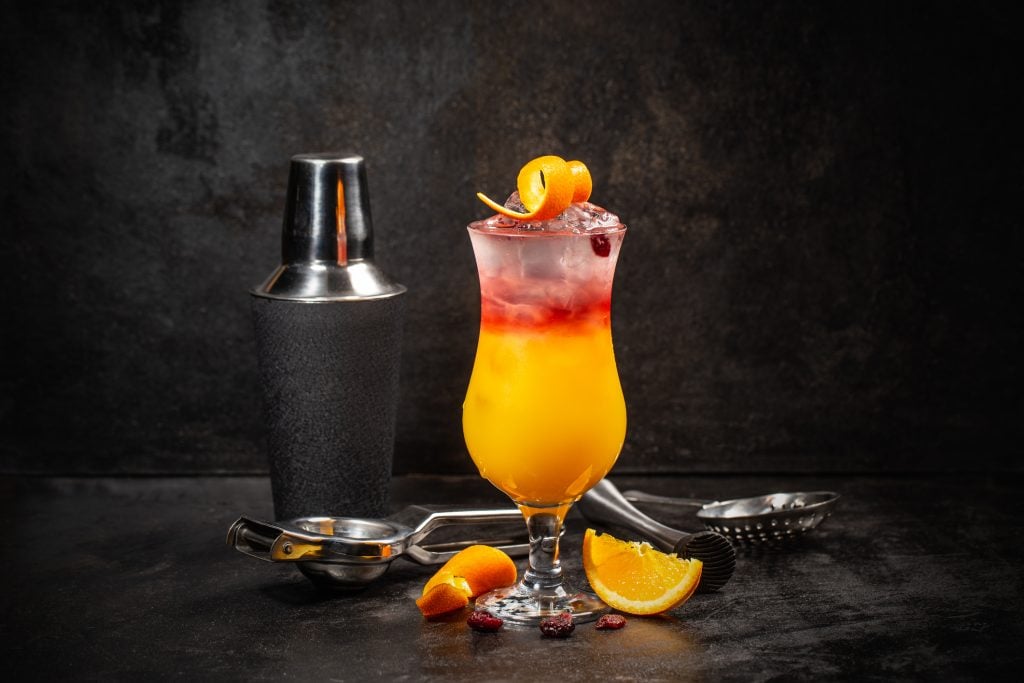 Sex on the Beach, classic layered style in a Hurricane glass

It’s so easy to make this underrated serve at home and it’s just as easy to pump it full of quality. When it comes to the vodka, adding something salty like Mermaid Salt Vodka may help to balance the sweetness of this cocktail and satisfy 2021 drinkers. Ciroc Black Raspberry or Pineapple could be a hybrid option if you’re eschewing raspberry liqueur or pineapple juice. While Misty Isle Vodka is the sort of clean and crisp liquid able to bring this cocktail up in premium.

And then there’s the schnapps. You can’t go wrong with a trusty Archer’s Peach Schnapps but something like Freihof’s 1885 Marille Apricot will elevate your Sex on the Beach. Needless to say, make sure your juice is as fresh as possible. When it comes to the garnish, I’m in favour of a cocktail umbrella and a slice of pineapple for a touch of kitsch, although pineapple leaves in favour of the brolly make for a more sophisticated flourish. At the end of the day, this cocktail is meant to be a bit of fun – make sure you have plenty of it, if you catch my drift.

How to make a Sex on the Beach

Mix the vodka, peach schnapps and orange juice together and pour into a hurricane glass over ice. Pour over the cranberry juice and garnish as you please. Stir before drinking.

Master of Malt @MasterOfMalt
22 minutes ago
. @RosebankWhisky Distillery launches 31-year-old whisky, the last ‘old Rosebank’ release before the distillery is reopened to the public next year.