Master of Malt
No Comments on The Nightcap: 24 June

Tormore and Lough Gill Distillery are sold to ambitious new owners and the world’s first pub for plants opens. It’s all in the Nightcap: 24 June edition!

It’s hot, isn’t it? It might be too hot. But then as soon as you say that, you’re worried the weather will desert you because you’ve tempted fate. Best to just make the most of it. Grab something cold and boozy, sit out in the sun, and enjoy this week’s round-up of drinks news.

Just a quick breakdown of the blog before we begin, we welcomed the oldest ever release from Teeling as well as a cocktail in a bottle combining sparkling wine, orange liqueur, herbs and spices, and recommended ten great single cask whiskies. We then celebrated Pride Month with a cracking cocktail, the craft behind Lyaness, and the skill it takes to become a serious bartender, while turning to more sober thoughts regarding AI and whisky investments. 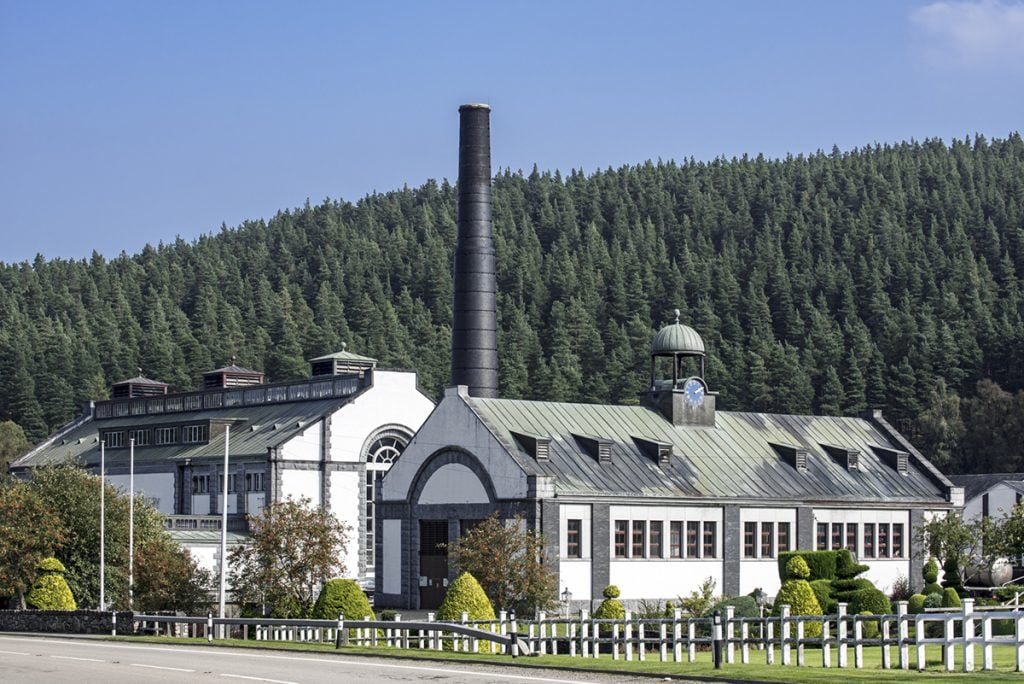 Pernod Ricard sells Tormore to founders of the Whisky Exchange

Big news from Speyside as we have just learned that Pernod Ricard has agreed to sell Tormore Distillery to Elixir. According to Alexandre Ricard, his firm is selling Tormore to concentrate on Aberlour and Miltonduff which are being massively expanded. The deal is somewhat complicated by the fact that the new owners will be Rajbir and Sukhinder Singh who recently sold most of their business including the Whisky Exchange to Pernod Ricard, but kept hold of Elixir Distillers. Sukhinder Singh explained: “Tormore is one of the most visually stunning distilleries in Speyside. It produces a beautiful spirit and fits in perfectly with the Elixir Distillers flavour-first philosophy to bottle only the very highest quality whiskies. We are hoping to build on the work that’s been done by Pernod Ricard to bring to life the magic of Tormore and show consumers around the world just what a hidden gem it is. We are humbled to be the new custodians of Tormore; we couldn’t have asked for a better distillery to welcome to the Elixir family alongside our new Islay distillery, Portintruan.” We are pleased to learn that there are plans for a visitor centre so that whisky lovers can appreciate this most striking of distilleries, designed by Sir Albert Richardson and opened in 1960, close up. 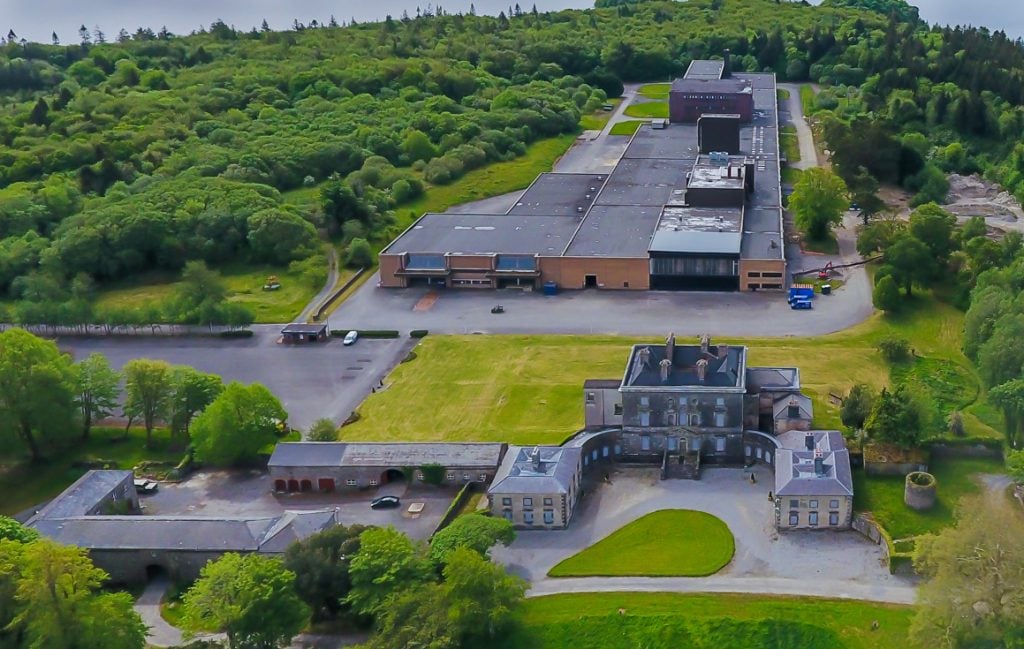 Lough Gill distillery – it’s about to get bigger

In perhaps the worst kept secret in Irish whiskey, it has finally been announced this week that American spirits group Sazerac, owners of Buffalo Trace and Paddy, has bought Sligo’s Lough Gill Distillery. It was reported in the Irish Independent back in September last year that the company was looking for a brand home for its Paddy Irish Whiskey. Now it has found it in the form of Lough Gill which was founded by David Raerthorne in Sligo in the west of Ireland and began distilling in 2019. It currently produces the Athrú Irish whiskey brand from bought-in stock. Raethorne commented: “This is a major announcement for Sligo and a vote of confidence in the potential for Sligo to become a major player in the booming global Irish whiskey market. The acquisition will enable Lough Gill Distillery to fully develop as a world-class visitor destination and will have significant long-term economic and tourism benefits for Sligo, which, for me, was always a personal goal.” Sazerac plans to increase capacity with new warehousing, bottling lines and a hospitality infrastructure to welcome 150,000 visitors per year. Irish whiskey keeps getting bigger and bigger. 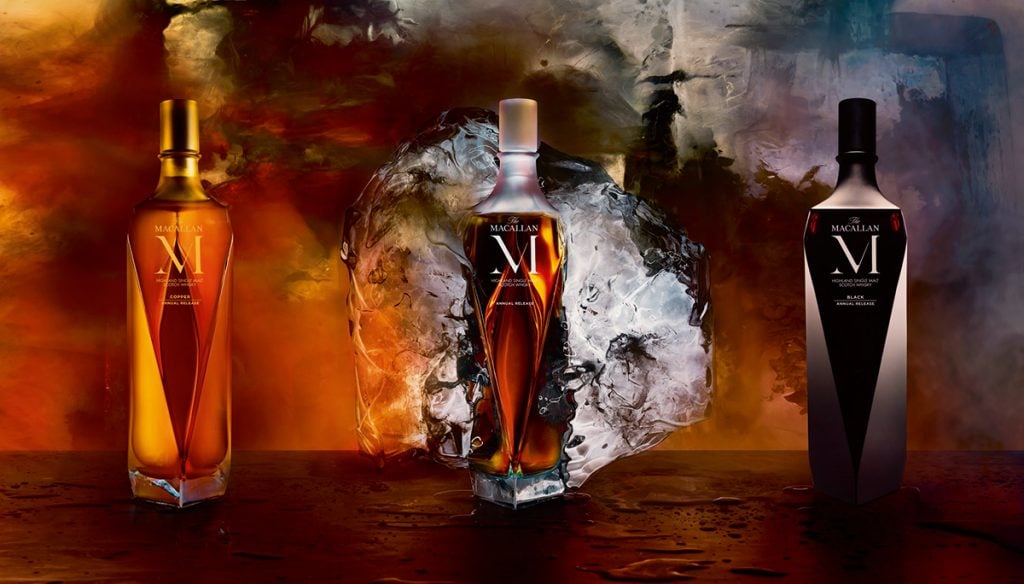 The distillery that never sleeps has created a brand new collection. The Macallan has launched a trio of limited-edition single malt whiskies as part of the brand’s M Collection, designed to celebrate the brand’s ‘six pillars’: natural colour, mastery, curiously small spirit stills, the estate, exceptional oak casks, and sherry seasoning. The first of the three, The Macallan M 2022 Release, was matured in sherry-seasoned oak casks and tasting notes include chocolate, dried fruit and spice. The Macallan M Black 2022 Release, meanwhile, is a peated whisky aged in ‘rare’, black-ended sherry-seasoned oak casks, and The Macallan M Copper 2022 Release aims to reflect the distillery’s small stills and is said to taste of fruit and sweet malt. Each whisky comes in a 700ml decanter, and are priced at £5,000, £5,700, and £6,250 respectively, and will be coming soon to Master of Malt. 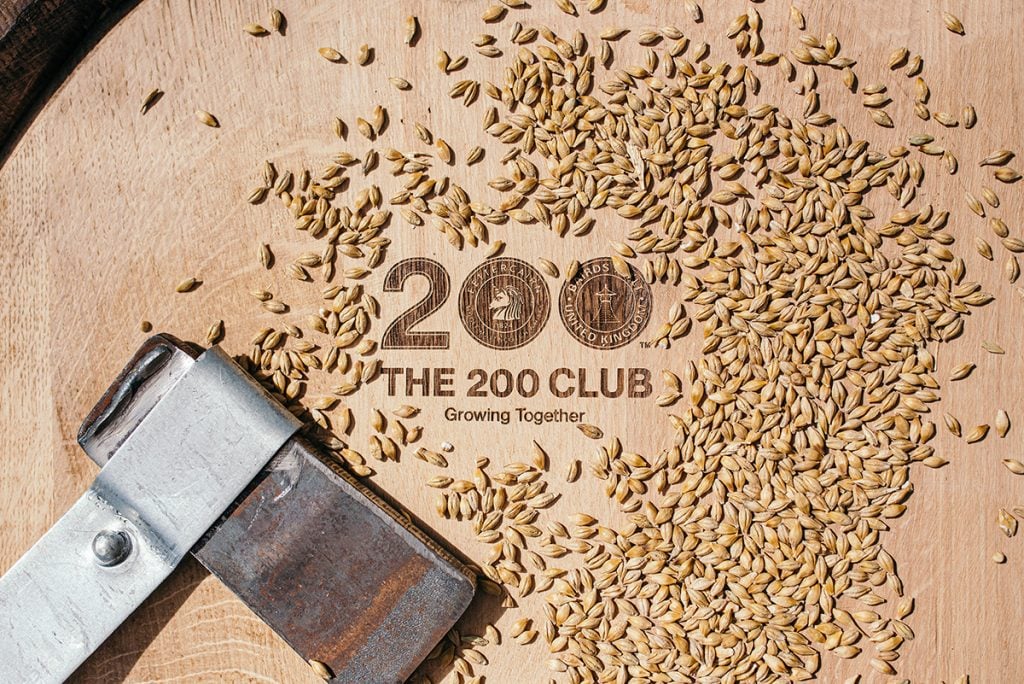 We love this kind of initiative

Whyte & Mackay has unveiled the Fettercairn 200 Club, a partnership with local farmers to supply Fettercairn Distillery with 100% the barley it needs to produce whisky. Teaming up with malt producer Bairds Malt, the scheme will see barley farmers within a 50-mile radius of the distillery supply the producer with 100% of the barley required to produce its whisky, ensuring ‘end-to-end transparency’. Eventually the plan is to make its own single-origin single malt whisky. “We talk about being progressive and defying convention and the 200 Club truly supports this commitment,” says Stewart Walker, distillery manager. “Working with local farmers not only supports our vital community, but also ensures the highest quality of locally-supplied barley is used in our unique distillation process while truly cementing our relationship with the land”. 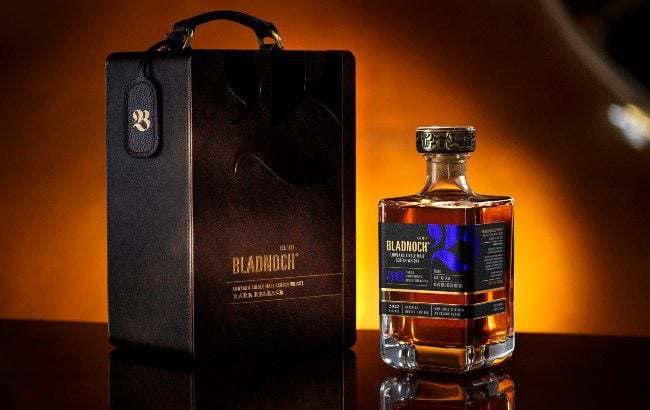 Bladnoch rolling out the big hitters

Lowland distillery Bladnoch is going big with its oldest ever whisky. The brand has been making up for the six years it spent dormant before 2015 by revamping its core range and creating a slew of limited-editions. This one is a 30-year-old single malt whisky aged in Oloroso sherry and Moscatel casks, bottled without chill-filtration at 45.5% ABV. “Our 30-year-old was designed to showcase the pinnacle of our range with the unique combination of oloroso and Moscatel casks. This unique cask combination, rarity and character will inspire our future whisky making for many years.” says master distiller Dr Nick Savage, who joined Bladnoch from The Macallan in 2019. There’s just 950 bottles priced at £1,000. 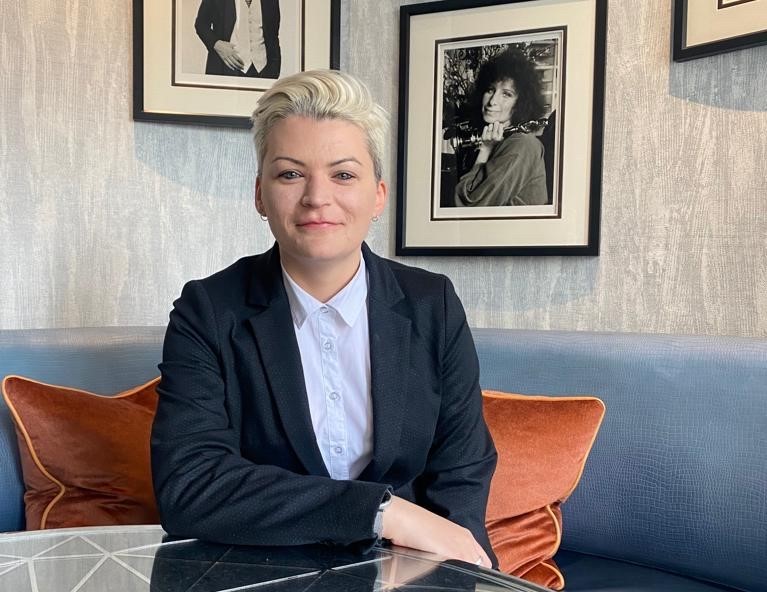 Chelsie Bailey takes over at the American Bar at the Savoy

Following the surprise departure of Shannon Tebay in May, there was a vacancy for the biggest job in British bartending, head bartender at the American Bar at the Savoy. And now it has been filled! Stepping into the giant shoes of legends like Ada Coleman and Harry Craddock, will be Chelsie Bailey who was previously general manager at one of our favourite London bars, Happiness Forgets. In her career which began in Bristol, she has won some big awards including Chivas Masters in 2016, Monkey Shoulder in 2017 and Bacardi Legacy in 2019. So it’s fair to say she knows her way around a shaker. She commented: “I’m thrilled to be joining the Savoy team and working with such a group of talented and dynamic people; together writing the next chapter of the American Bar’s history. The Savoy has always had a reputation for innovation and quality; so the role carries with it a sense of responsibility and challenge, but that is what’s so exciting about this iconic position within the bar industry.” Meanwhile we have just learned that Tebay is now beverage director at London events company Outernet Live. So there is life after the American Bar. 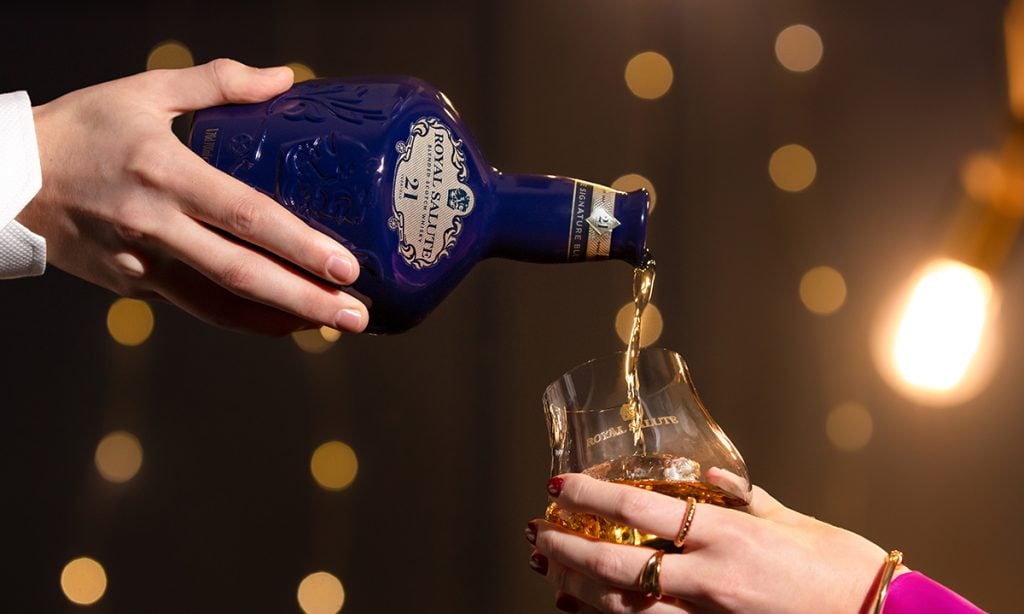 Another welcome step in the right direction

Royal Salute’s signature porcelain flagon is set to be replaced. A more sustainable coated glass flagon is on the way from this month, starting with the 21 Year Old Signature Blend. The recyclable vessel will then be rolled out across the full portfolio, resulting in a 70% reduction in carbon footprint of the primary packaging. The plan is in line with Pernod Ricard’s sustainability and responsibility roadmap, ‘Good Times from a Good Place’ and all Royal Salute packaging will be 100% recyclable, reusable or compostable by 2025. “Sustainability isn’t a nice to have, it’s a high priority, and I’m proud to see Royal Salute’s iconic bottle transition from ceramic to glass – this represents a key milestone in Chivas Brothers’ journey towards 100% recyclable packaging,” says Jean-Etienne Gourgues, chairman and CEO of Chivas Brothers. 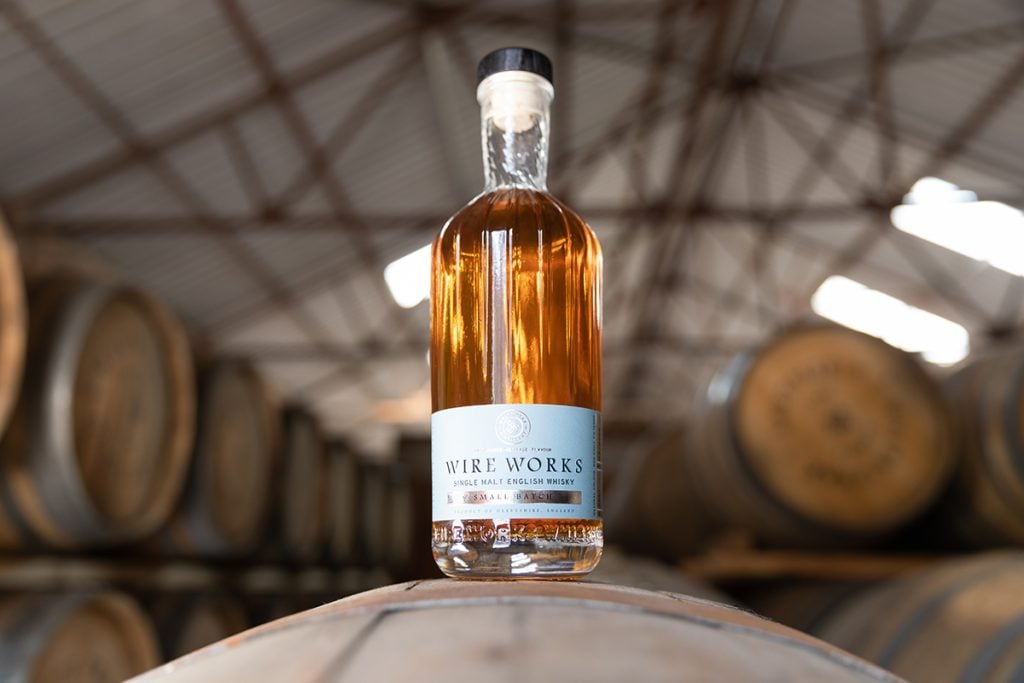 Can they keep up the high standards set by the first release?

We were there when White Peak Distillery unveiled its first whisky and now we’re pleased to see it follow up with a new single malt: Wire Works Whisky Small Batch. Max Vaughan, who co-founded the distillery with his wife, Claire, days they were “incredibly humbled by the fantastic reaction to our first release of Wire Works Whisky in February,” which we really enjoyed, so we’re excited to see what’s coming next. The Small Batch which is bottled at 46.2% ABV, is a lightly peated single malt aged entirely in STR (shaved, toasted and re-charred) casks, and ex-Bourbon barrels. Tasting notes include sweet popcorn and orchard fruits on the nose, brandy baskets and sandalwood on the palate, leading to a sweet vanilla finish with a hint of nutmeg. The brand will launch just over 4,300 bottles of Wire Works Whisky Small Batch soon for a price of £60. 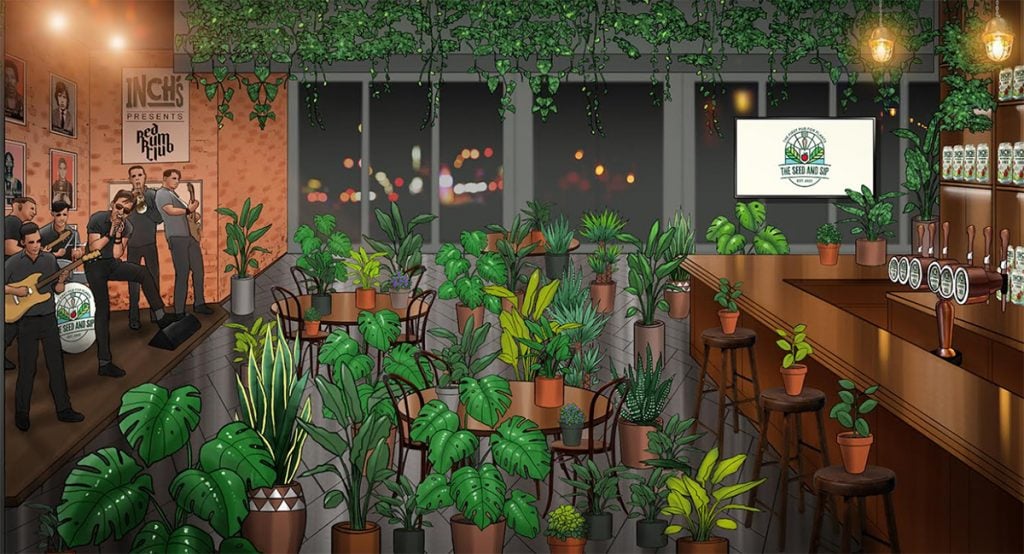 No, we don’t get it either

And finally… a pub for plants?

A couple of weeks ago we had a press release from Heineken that had everyone scratching their heads. It was something to do with a ‘real life’ Metaverse bar opening in Shoreditch. Even the youngest, hippest cats in the office, ‘digital natives’ we believe they’re called, were baffled. Now Heinken’s PR people have done it again with a ‘pub for plants’ event to promote its cider brand Inch’s. It’s called ‘The Seed and Sip’ and it is “designed specifically with plants in mind, the first pub for plants will play host to an array of forna-inspired events including the first gig for plants performed by Red Rum Club.” Us neither. Perhaps someone could head down to the Freemount, the Manchester pub where this is happening, at 6pm on 29 June, and report back what all this is about because we haven’t a scoobie.