One menu, focusing on five ingredients, each in three different cocktails. The Classic Bars series is back, and we can’t believe it’s taken us this long to cover Lyaness, Sea Containers from the world-famous Mr Lyan.

There are many cocktail bars that will promise to expand your horizons and give you something you’ve never tried before. And they may deliver. But none so much as Lyaness, the creation of the award-winning Mr Lyan (real name Ryan Chetiyawardana), found on London’s Southbank within Sea Containers and clocking in at number 29 on the World’s 50 Best Bars list.

The legacy of Mr Lyan

Mr Lyan worked his way through some of the country’s most famous bars before taking on his own, including Edinburgh’s Bramble and 69 Colebrooke Row in London. His emphasis on creating tinctures and ingredients in-house, and focus on sustainability was likely influenced not just by one, but by the three courses he studied at university: biology, fashion, and philosophy. 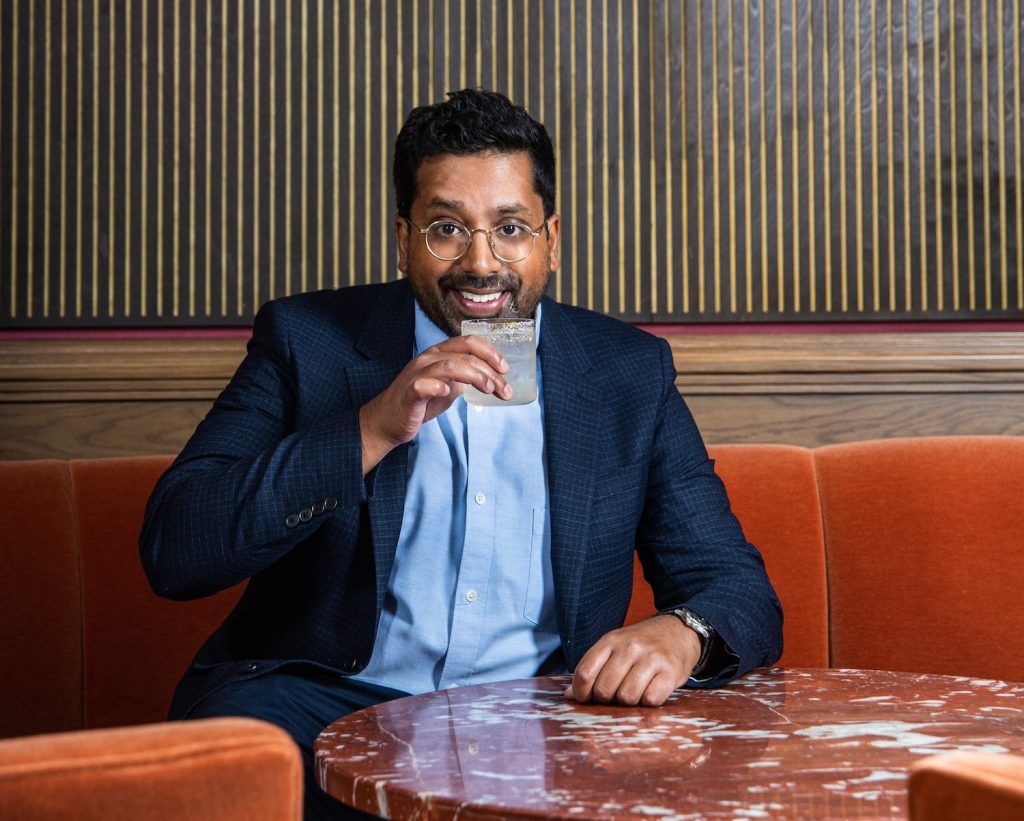 Had we done the Classic Bars series sooner, then it might have focused on White Lyan, his first bar founded on Hoxton Street in 2013 (which turned into Super Lyan in 2016, now closed), or Dandelyan, opened on Southbank in 2014 and crowned World’s Best bar in 2015. To everyone’s surprise, Dandelyan shut its doors as it approached its fourth birthday, and Lyaness rose from the ashes.

The current Lyaness menu centres around just five different ingredients, rather than just cocktail types: Oyster Honey, Green Sauce Liqueur, Malt and Grass Amazake, Fruit Furikake, and, last but certainly not least, Blood Curaçao. And you can bet these are all made in-house. Each ingredient then gets to shine in three cocktails, meaning they’re never mixed.

These might all sound unusual and exotic, but the whole point of the menu is to look at international flavours through a British lens, so expect local ingredients. Lyaness states that it takes ‘a cook’s approach to flavour’, which makes sense when you find out the menu is called the Lyaness British Cookbook. You can order each individual ingredient as a 10ml taster for £2 (which is what we did, alongside the cocktails), and it’s incredibly interesting. I would highly recommend doing so if you can. 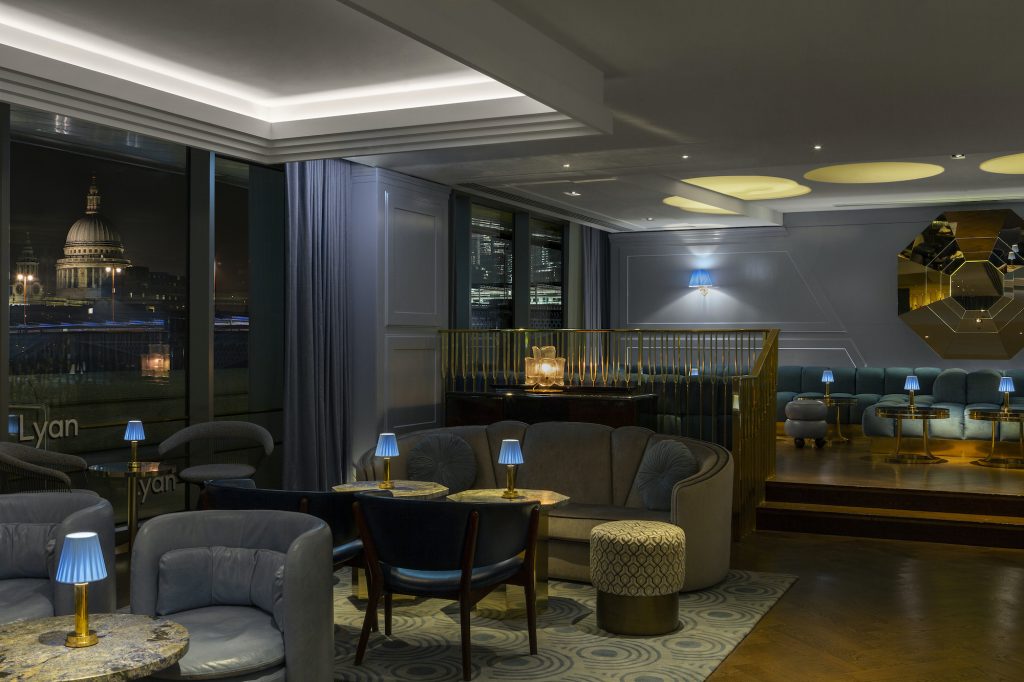 No points for spotting St. Paul’s from Lyaness

International flavours through a British lens

First up, combining the classic combination of coastal savouriness with sweetness is Oyster Honey. Both bees and oysters transform elements from their environment into a new physical form, which is where inspiration for the pairing came from – and the luxury of these natural ingredients isn’t lost on the Lyaness team either. On its own, the honey is dangerously drinkable. Next up, this one’s for you, my fellow salsa verde lovers. Green Sauce Liqueur is made with green herbs, sour fruits, and fungi, inspired by the plethora of herbaceous sauces found in many cultures which are usually used to cut through rich, fatty dishes. Yes, it’s green, herbaceous, and full of umami, but there’s bursts of citrus brightness in there too. We adored this in the Green Rayu Punch, where it’s paired with Suntory Toki, maize, cashew milk rayu (made with chilli), and bubbles.

Malt & Grass Amazake was created thanks to the team’s interest in the malting process, made from grasses, cereals, and pumpkin seeds. This is super sweet and biscuity, described by our brilliant waiter Luca as tasting like a donut – and he’s not wrong! We then have Fruit Furikake, a blend of British seaweed with local fruits and vegetables (like the incredibly British burdock root). It’s a rich, well-balanced combination of sweetness and salinity, which meant we loved it in Moonwalk, a refreshing Highball pairing it with Tequila, pomelo cordial, buckwheat, and melon soda. 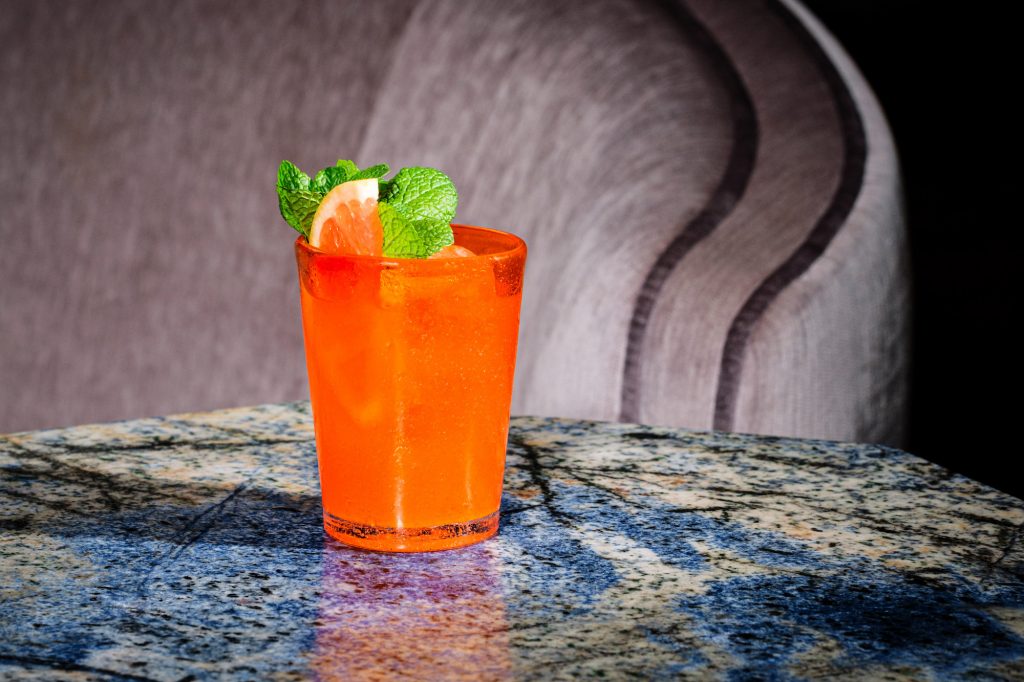 The Blood Brown Derby, made with Blood Curaçao

Now for the most unusual and likely divisive ingredient – veggies and vegans, look away. The Blood Curaçao is made from dehydrated pigs’ blood, which at first sounds terrifying. But Luca tells us how pig’s blood is one of the most wasted ingredients on the planet. It’s a nod not just to the historic British nose-to-tail method of cooking, but the use of blood in dishes around the world. Many countries have their own version of black pudding. On its own, it has a hint of that metallic taste that you’ll recognise from when you cut your own finger, but just a hint. It’s balanced out by oily orange sweetness, and rich woodiness. After a hesitant start when sipping it neat, it actually became one of our favourite components. You’ll want to try this one in the Blood Brown Derby (pictured above), where it’s paired with Maker’s Mark, grapefruit honey, and fermented rose.

The menu is also made for absolute ease of navigation. They may not be simple serves, but no matter if you’re a regular visitor or new to the world of cocktails, you’ll be able to decide on what you like thanks to a day to night, lighter to richer guide and scale at the back of the menu. And the whole experience is topped off by incredible staff, a carefully-curated interior, and a stunning location – everything you want and need from a cocktail bar. We hope that Lyaness is here to stay.