Master of Malt
No Comments on The Nightcap: 7 May

It’s been a shorter week thanks to the Bank Holiday weekend but there still was plenty going in the world of drinks. It’s The Nightcap: 7 May edition!

We hope you all spent the long weekend as far away from office desks (or wherever you work) as possible, and are nice and refreshed. It went quickly though, didn’t it? We can’t believe it’s already Friday and time for a new Nightcap. It dawned on us while enjoying our time off that if the powers-that-be made every working week just four days, then there’d be numerous benefits. Chief of which would be that it would feel like The Nightcap had arrived surprisingly early every week. And what a treat that would be. Right? Anyway, let’s get on with it.

On the MoM blog this week, we launched a new competition perfect for those who want to whip up some delicious Irish whiskey cocktails. We also had the pleasure of celebrating Dennis Malcolm’s incredible 60 years in the whisky business, enjoying an authentic English rum, some of the finest Mexican spirits for Cinco de Mayo, and a Tequila cocktail that celebrates the life of the late, great Tomas Estes. Elsewhere, Ian Buxton found out why you’re nowhere in the celeb world unless you’ve got your very own booze brand, Millie uncovered the divine truth behind the angel’s share and Lucy showed why English wineries should be high on your list of staycations options this year. 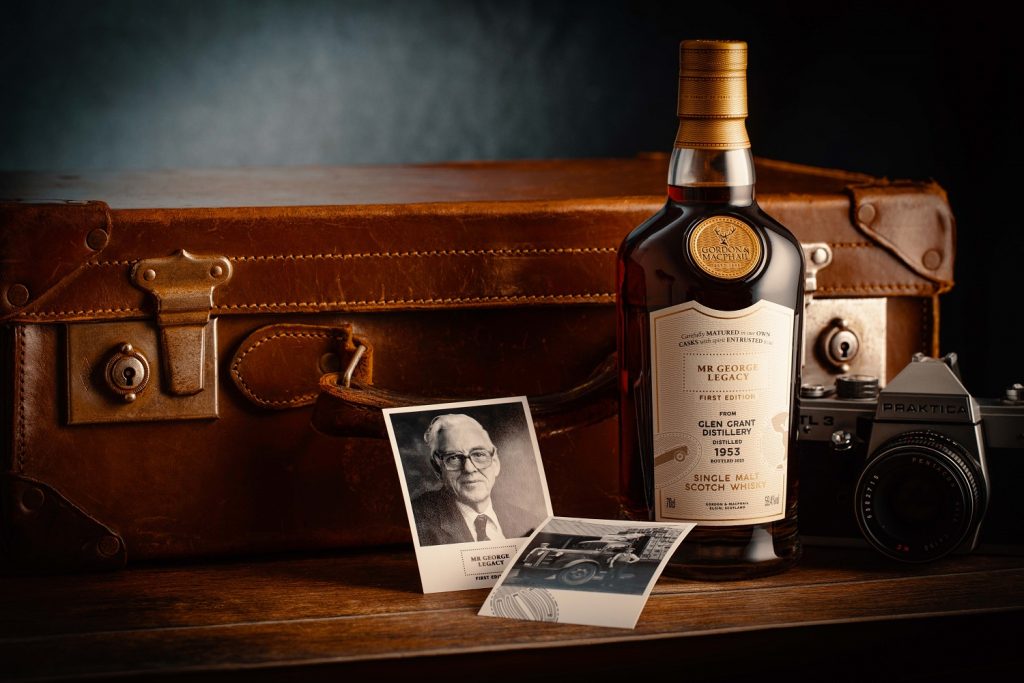 If you love a bit of ultra-rare single malt coverage then you’ll be pleased to know Gordon & MacPhail has something very impressive for you to enjoy this week. It’s a 67-year-old Scotch whisky distilled on Christmas Eve 1953 that was matured in a single, first-fill sherry butt and bottled at a cask strength of 59.4% ABV, which is incredible given the age of the whisky. You might be wondering why Gordon and & MacPhail have bottled it now given this fact, but it’s because the company is currently enjoying its 125th anniversary and saw fit to honour the man who contributed arguably the most to the brand: George Urquhart. Known by whisky legend Charlie MacLean as the “father of single malt” or as ‘Mr. George’ to his friends, he oversaw the filling of this very special cask during a period in which he was busy championing Scotland’s single malts while most were concerned with supplying spirit for blends. Just 355 bottles are available of the Gordon & MacPhail Mr. George Legacy 1953, which was distilled at Glen Grant. Stephen Rankin, the grandson of ‘Mr. George’ and Gordon & MacPhail’s director of prestige, says Mr. George held a particular fondness for the Speyside distillery, adding that the new “Legacy series allows us to explore some of these stories, providing some exceptional whiskies in fitting tribute to ‘Mr. George’s’ life’s work.” So, expect more rare, single cask drams in the future. They’ll set you back a pretty penny (the RRP for this one is £5,000), but if Maclean seems to think it’s worth it, noting: “This is a remarkable whisky. It is full of the complexity that long maturation can bring, yet it remains astonishingly vivacious. Frankly, as good as it gets!” 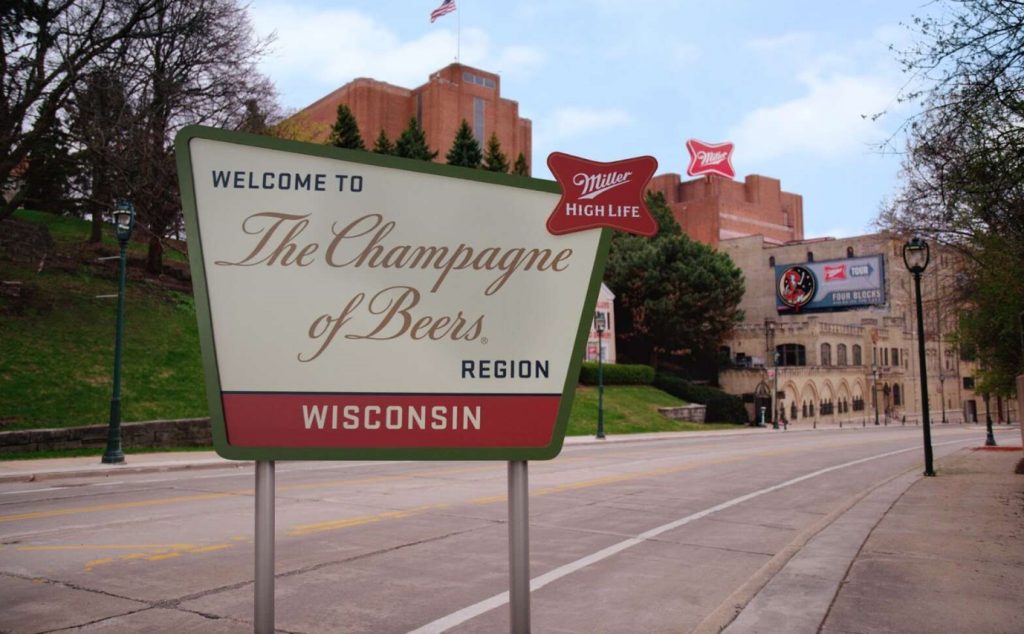 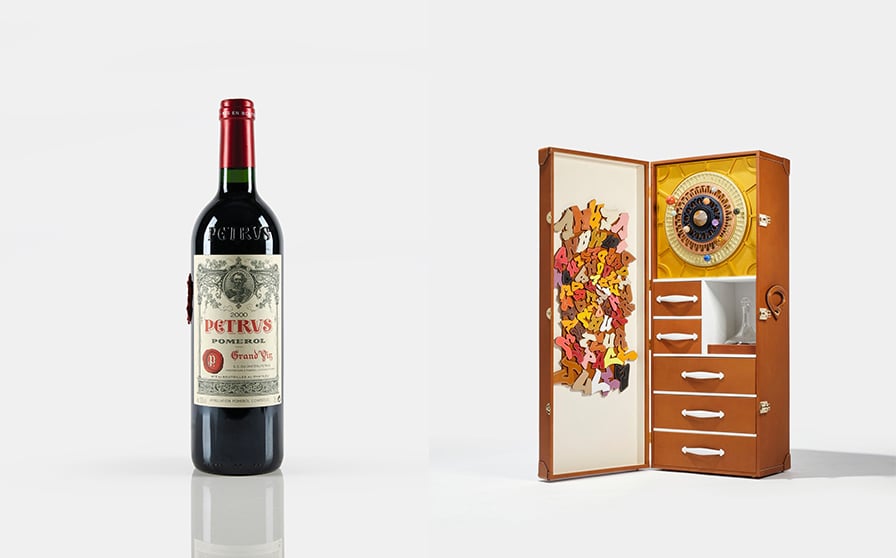 It seems there’s an awful lot of sending wine into space going on, but if you’ve ever wondered what the result of wine gracing the final frontier is then you’ve got a chance to find out now thanks to Christie’s. The auction house is selling a bottle of space-aged Pétrus 2000, which spent 14 months aboard the International Space Station (ISS). This is the first time wine has travelled to the ISS and returned to Earth and the aging took place in a carefully monitored and controlled environment. The wine will be presented in a trunk made by the Parisian Maison d’Arts Les Ateliers Victor, alongside a decanter, glasses, and a corkscrew made from a meteorite. Tim Triptree, a master of wine who works at Christie’s, says a regular bottle of Pétrus 2000 will also be included alongside the space-aged bottle, “so the lucky buyer will be able to compare the two”. This is the only bottle from the case that was sent to space, as three were opened for the tasting and the remaining eight will be kept back for future research. We wouldn’t get your hopes up about winning this particular lot, however, as Christie’s estimates a sale price of $1m (£720,000). The good news is that the proceeds of the sale will go towards funding future space missions. So, if you do have that kind of cash sitting around and would like to acquire a piece of vinous and space history while also contributing to ongoing research then head to Christie’s now.

You can wish McEwan a fond farewell over some quality drams

Jim McEwan is retiring… again. You may remember back in 2015, Jim McEwan retired from Bruichladdich only two years later to be lured back with a production director job at new Islay distillery Ardnahoe. Since then he’s appeared in two films: The Water of Life and The Golden Dram, done a book: A Journeyman’s Journey, and launched his own range of whiskies with Dramfool, Jim McEwan Signature Collection. Oh, and helped out at Cape Byron distillery in Australia. Makes a change from playing lots of golf. But now he really is retiring and he’s doing what’s billed rather ominously as a “last chat”. It’ll cost you £185 to take part with £25 going to Scottish charity Air Ambulance. For this you’ll receive access to The Water of Life, a copy of The Journeyman’s Journey with a signed letter from McEwan, plus a Gold Collection tasting kit with rare drams from notable McEwan distilleries including Bowmore, Bruichladdich, and his last gig, Cape Byron. Most importantly, you’ll also get access to a Zoom link to join a chat with McEwan on Sunday 23 May. If that’s a bit steep for you, there’s a £50 ‘Silver Collection’ option (£10 going to charity) with no book and less fancy whiskies but you still get to chat with the man himself and bid him a fond farewell. Or is it au revoir? 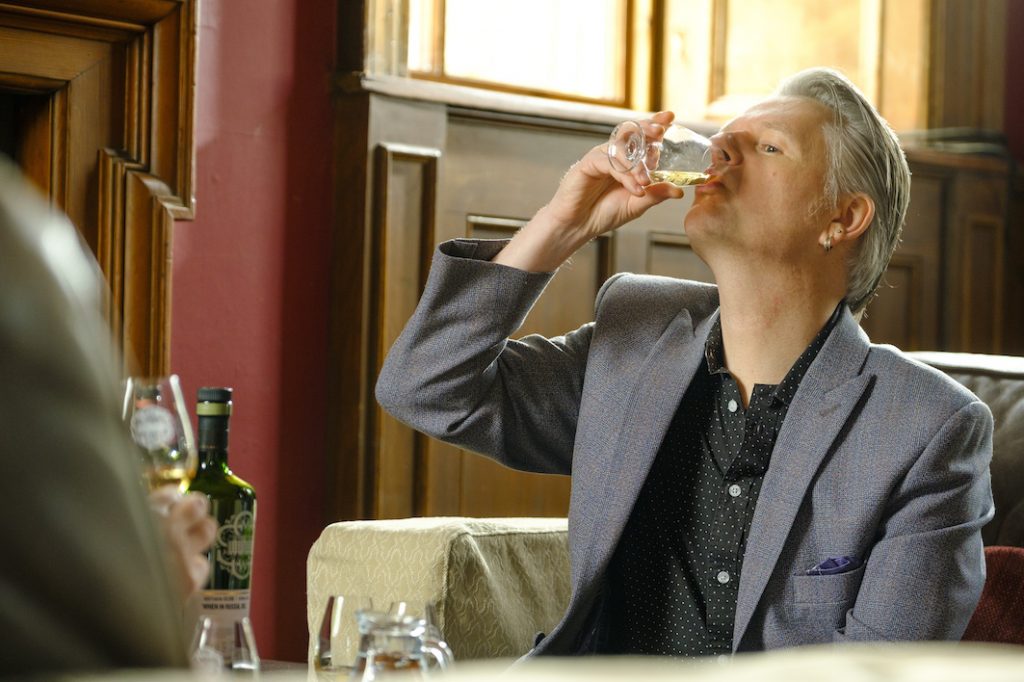 Vic Galloway invites you to enjoy his picks. And we invite you to make your own…

The Scotch Malt Whisky Society (SMWS) is getting its groove on with long-standing BBC Radio Scotland presenter, Vic Galloway, by pairing music with whisky flavour profiles. The DJ has been broadcasting weekly on BBC Radio 1, BBC Scotland and BBC 6 Music for over 22 years and also happens to be an avid whisky fan and a member of the SMWS. Examples from the full SMWS pairing list, which can be found here, include Society’s ‘Young & Spritely’ flavour profile being likened to the genre ‘Dream Pop’ (whatever that is), with its “effervescent and sweet, joyous and uplifting exuberance that seems utterly timeless and forever young”. The Scottish broadcaster said: “Music and whisky go together like, well, music and whisky! There’s nothing better than sitting back with like-minded friends and sharing experiences. And that is what The Scotch Malt Whisky Society is all about.” He added that there are some surprises in his selection and recommends folks become members of the SMWS, which he describes as the “world’s most entertaining whisky club”. Galloway will also chat all things music and whisky on the SMWS ‘Virtual Pub’ being streamed tonight, one of the many events in the calendar to look forward to for members. We’d love to hear your suggestions on genre and whisky pairings you’d like to see. Liquid funk and Lagavulin? Garage rock and Glenlivet? Let us know in the comments below. 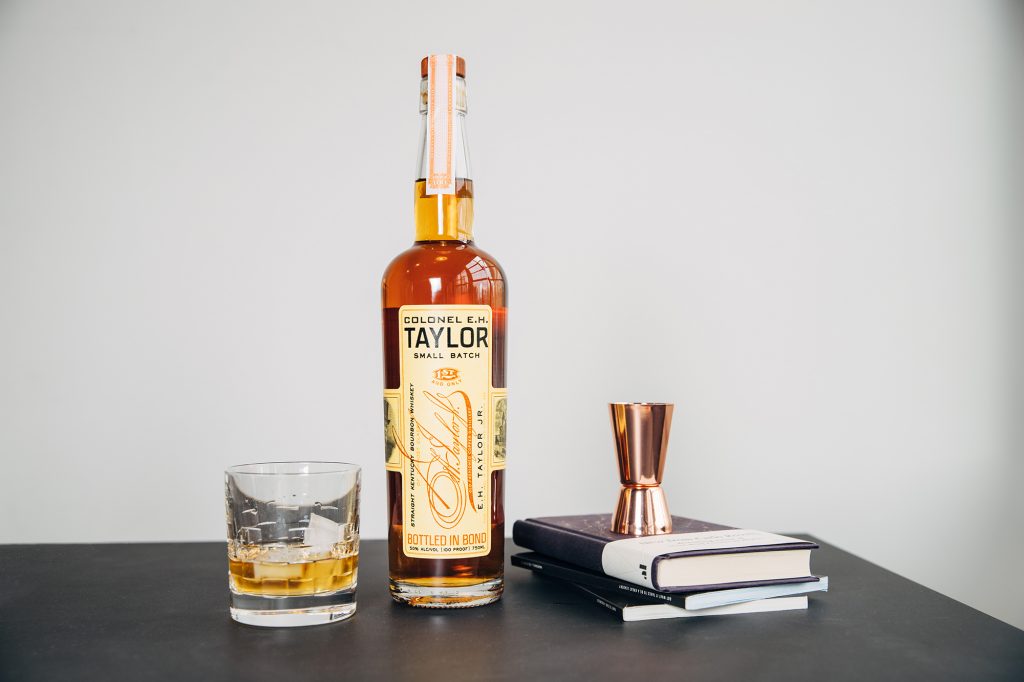 It turns out there’s an ever big rip-off than space wine. Who knew?

One of the dangers of buying very old spirits is the rise of counterfeiting. It appears that one such bottle was discovered recently in New York. Reporters from US publication Inside Edition bought a bottle of Colonel E.H. Taylor Four Grain Bourbon from Acker Wines, America’s oldest wine merchants, for $1,000. This whiskey was released at around $100 a bottle but such is the demand that bottles have been going for up $3,000. They sent it to where it was made, Buffalo Trace in Kentucky, for authentication where it was pronounced a fake, and not a very convincing one, with the proof on the bottle not matching the contents, a backwards strip stamp, and it was missing the correct lot code. This isn’t the first time that Acker Wines, previously known as Acker, Merrall and Condit, has run into problems with counterfeit goods. The firm was at the centre of the Rudy Kurniawan wine counterfeiting scandal outlined in the 2016 film Sour Grapes. It sold millions of dollars of rare wines that turned out to be fakes. The moral of the story is always do your homework before buying rare boozes. 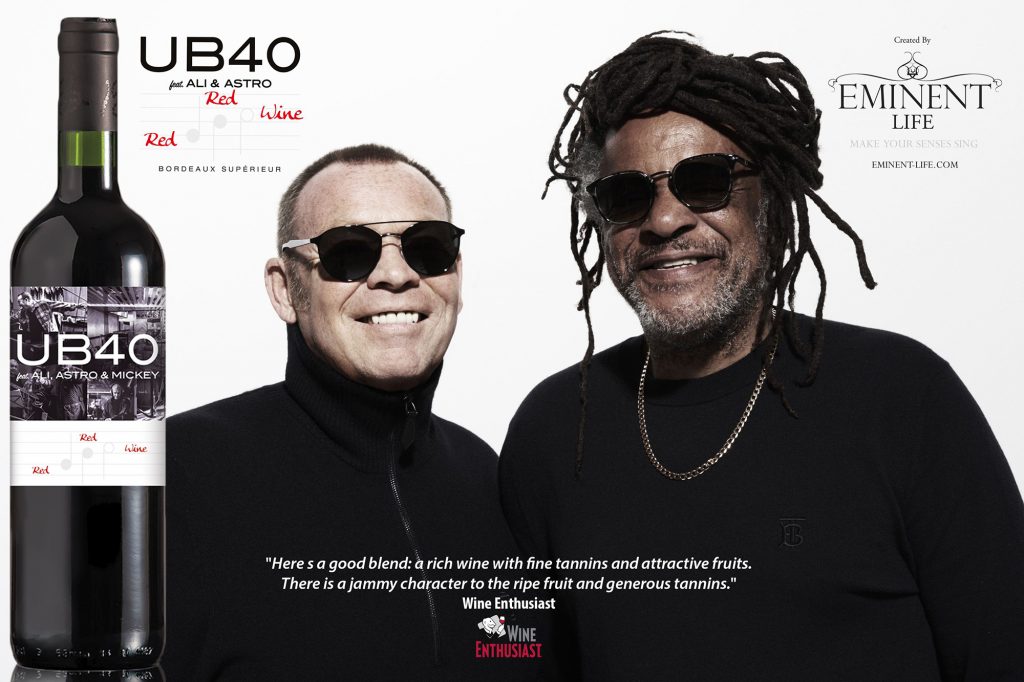 The only real question is, how did this move not happen sooner?

We’ve just put a story up on the blog about celebrity boozes, and it’s already out of date because we have just learned that the lads from top light reggae outfit UB40 will soon be releasing their very own wine. It’s called… yes you guessed it… Red, Red Wine after their biggest hit (though the song was actually written by Neil Diamond who had a hit with it in 1968). It’s a Merlot-heavy Bordeaux Supérieur priced at an extremely punchy £28.50 – you can get some seriously tasty claret for that money. Nevertheless, it’s been described as “a good blend: a rich wine with fine tannins and attractive fruits.“ Not our words, but the words of Wine Enthusiast magazine. For those who don’t want to pony up nearly £30, you can save a massive four quid with the £24.50 version which is an organic vegan Merlot/ Petit Verdot blend though we’re not told where it’s from. Both wines are made in conjunction with a company called Eminent Life. Astro (above right) from UB40 commented: “Red, Red Wine has great balance and is really satisfying to drink. Like our music, we are always looking for balance and harmony. The Red Red Wine has both.” So there you go.

The roof is on fire: the best bars with a view