Master of Malt
1 Comment on New Arrival of the Week: Scratch Faithful Rum

This week we’re shining our New Arrival lamp on a Scratch Faithful Rum which was distilled not in Jamaica, Cuba or Barbados, but in Stevenage. And that’s not all because Faithful is the basis for a whole range of rums made by Doug Miller, entirely from scratch. Hence the name.

In an age of media-trained master distillers and slick brand ambassadors, it’s refreshing to talk to someone who just says what he thinks, even if it might get him into trouble. Someone like Doug Miller, the man behind Scratch rum, who has strong views about a lack of transparency in the fast-growing ‘English rum’ category. But more on that later.

It’s also refreshing in an age of City-funded start-ups to find somebody distilling in an old stables near Stevenage using one 500 litre copper pot still rather than a shiny state of the art distillery. He’s doing what he always wanted to do. “I got into rum at university and I started just doing ferments and beers. Then post-uni I started just distilling,” Miller said.

He quickly realised what he was doing wasn’t exactly legal, so in 2016 he obtained a distilling licence and got to work. He spent a couple of years experimenting, “trying different yeasts, different sugars, different fermentation times,” he said. From the beginning the focus has been on rum alone. “I didn’t want to set up a distillery and do gin, whisky, and vodka,” he said. “Rum as a category is so broad, there’s enough of it to fill a lifetime of exploration and distillation.” 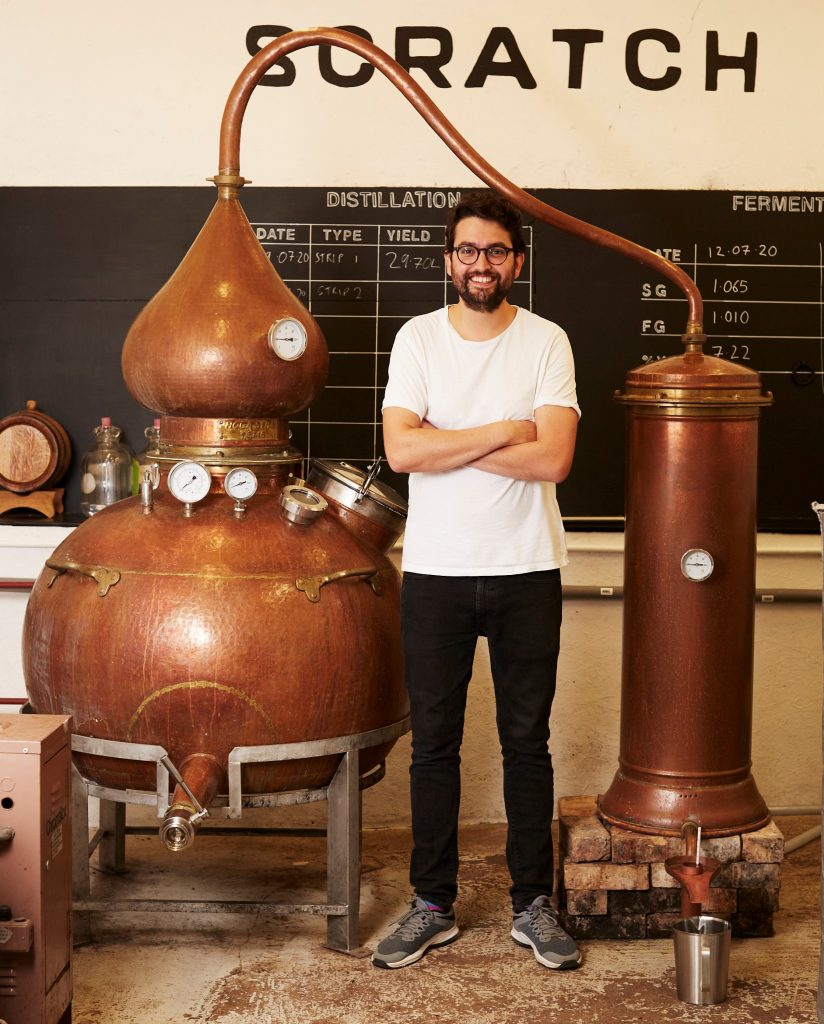 “I am one of those slightly weird people who actually likes fermenting and making things from scratch and doing things the hard way”, he said, “well you get more control so you get a nicer product in my view… but I would say that of course!”

The basis of the current Scratch range is what he calls Faithful. It begins with molasses and a very long fermentation, between two and three weeks. It took a lot of experimentation to find a yeast that worked in England’s cold climate. He uses the Jamaican technique of adding dunder – left over from the first distillation – to the ferment. “What you get is consistency of flavour across a number of ferments but also the nutrients and the compounds found in that leftover stuff feed that yeast and over time make the flavour profile more pronounced. It’s almost like reducing a stock.”

This fermentation stage is not something to be hurried through. “You can never make a great rum from a shit ferment,” he said. The final step before distillation is to filter the ferment which, according to Miller, makes the end product “cleaner” and prevents “bitter flavours” during distillation

He uses a 500 litre copper pot still from Hoga in Spain but his technique is unusual. After the first distillation rather than putting it back through again, he ages the low wines in new Scotch whisky casks with “a small portion of the heads and tails from previous runs. So you’re getting a full blend of the spectrum of distillation.” After ageing, the liquid goes back through the still. It’s then blended with water and bottled at 42% ABV to create Faithful rum.

But that’s not all, Faithful is the basis of everything at the distillery at the moment. 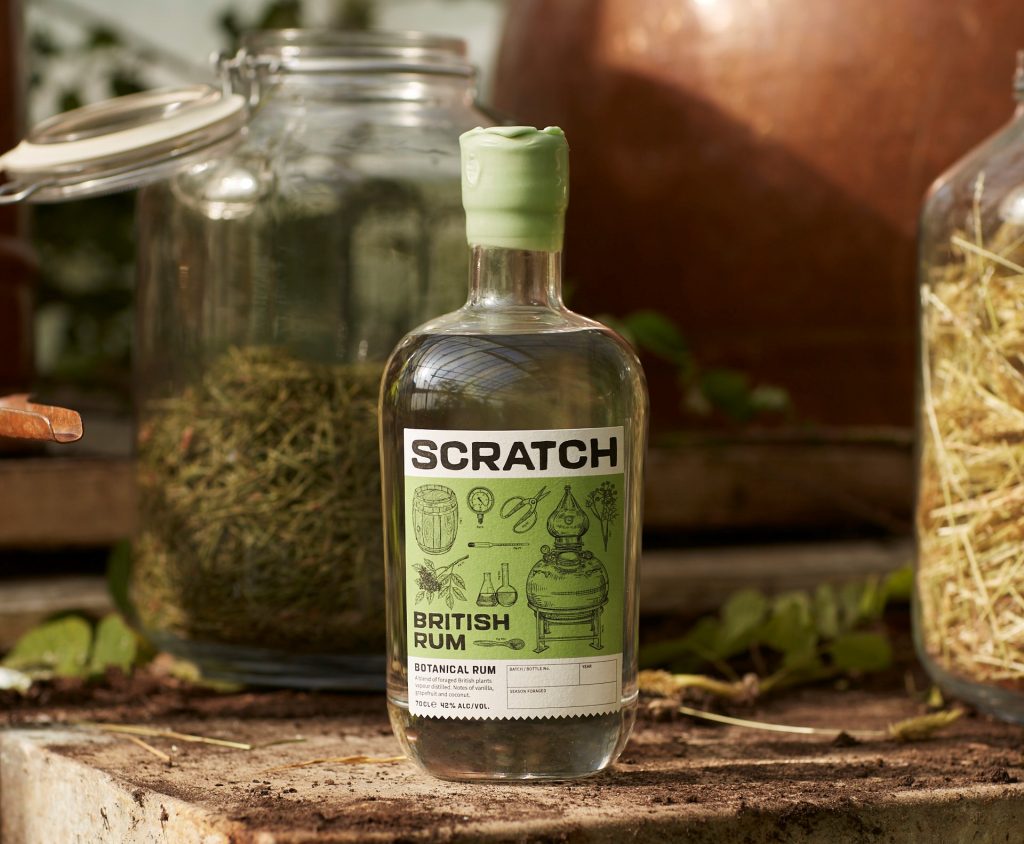 Can you spot the botanicals?

Miller makes a sloe rum and a secret recipe botanical rum using only British ingredients. “I’m not a fan of spiced rum. I find spiced rum cloying, and essentially a way to mask a bad spirit. So what I tried to do with Botanical is create a product using British foraged local botanicals,” Miller said.

He’s cagey about the process and recipe, “because I’ve seen big producers come in and copy stuff.” But will say it involves British botanicals that mimic classic spiced rum flavour. Using his one still, “we put in a smaller 50 litre copper pot, with the botanicals in the vapour trail and then we take cuts from between 85% ABV down to about 78% ABV.”

Despite the lack of tropical botanicals, it really does taste of citrus, vanilla and coconut. Very clever and makes a refreshing alternative to a G&T as well as a killer Daiquiri.

Miller produces two ages rums, Golden, matured in new oak casks, and a longer-aged rum called Patience which won a bronze medal at the IWSC this year. “Patience is a blend of three and two year old spirits. The bourbon cask is the three years, it makes up 90% of the blend and then the final 10% is that two year old new oak cask.”

There’s clearly a massive amount of potential at Scratch particularly with cask releases. Miller compares British rum to Japanese whisky, taking traditional techniques but innovating. “It can remain grounded to rum as a whole, but it can move the category forward.”

He’s a fan of Foursquare in Barbados particularly the single cask releases but thinks that he’s trying to do something different. “Most of the Caribbean producers tend to use ex-bourbon casks because of the proximity to the US. In the UK we’ve got proximity to a wine industry, we’ve got beer guys, you’ve got whisky guys, you’ve got a whole range of Cognac producers in France,” he said.

Aged products will always be small batch releases either blends or single casks. He said, “We’ve only got about 300 bottles of Patience left and when that’s done I’m going to make another cask release.” He’s got all kinds of different barrels on the go including Cognac, Tequila, bourbon and Scotch whisky, sweet wine and others.

He’s also playing around with different ferments including one based on a yeast strain that he isolated himself and by adding things to the ferment including hops and fruit. 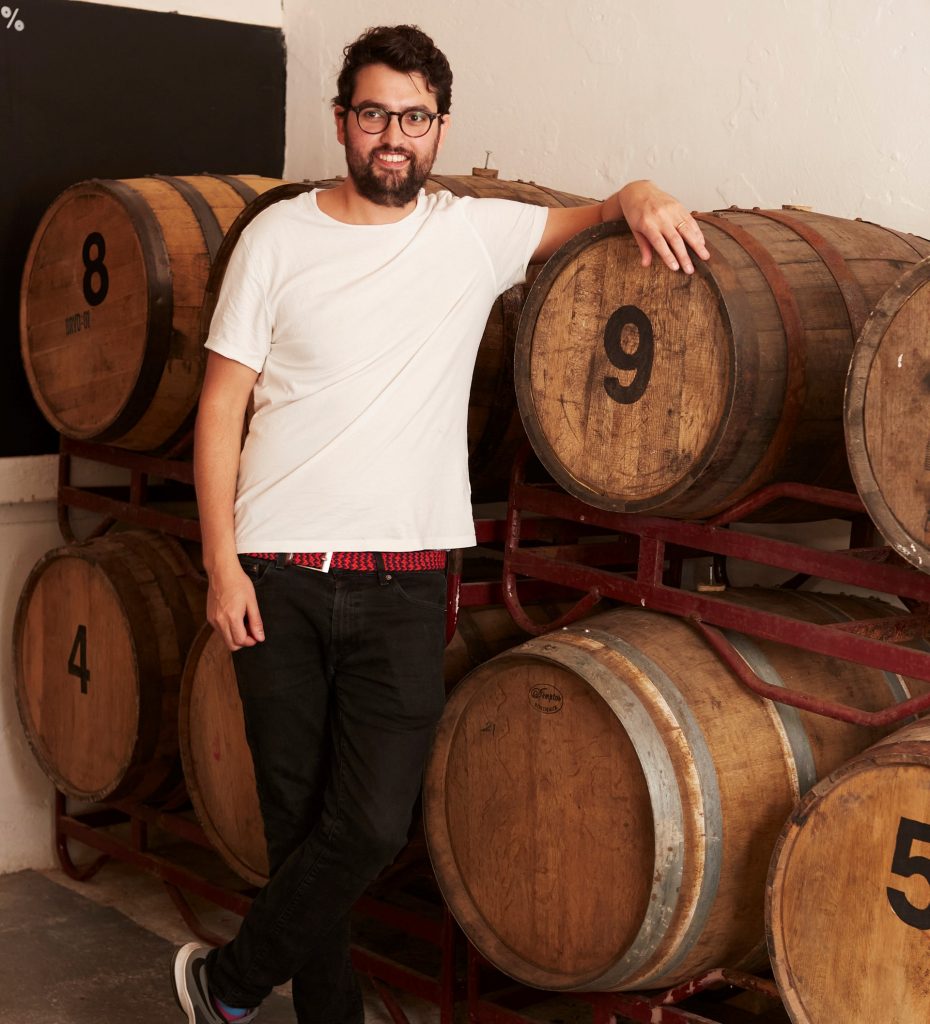 Can’t wait till these beauties are ready!

What is British rum?

Miller is aware that rum’s greatest asset, its lack of rules, can be a liability compared with more strictly-governed spirits like Scotch whisky. He thinks there’s a “lack of transparency” in the industry. He is particularly outspoken about how confusing rum can be for customers with many seemingly British producers using imported base spirits: “I don’t think you should be able to import a rum that’s aged in the Caribbean, flavour it or water it down here and then stick it in a British branded bottle or a label that says ‘made in Britain’ or ‘crafted in Britain’ or ‘British rum’, I think that’s disingenuous to say the least.”

Miller also thinks there needs to be more “transparency around the production methods as well as what you can and can’t do post-distillation.” He described some flavoured products as like “alcoholic squash”. He thinks: “the more shit rum that’s on the market, that’s full of all kinds of flavouring, sugars, and caramel, that puts off people from actually trying other rums.”

“The industry as a whole needs to actually own some of the stuff that it’s peddling and some of the stuff that it’s selling to consumers,” he said. It’s similar to what Richard Seale from Foursquare and others have been saying about the need for an agreed classification so that people know exactly what’s in the bottle and where it came from. But with so many producers including the industry’s giants invested in the current opaque system, it seems unlikely there will be any progress in the near future. Miller acknowledges that “he’s probably in a minority.”

Scratch, however, has built a reputation in a short space of time based on the quality of its products rather than being part of some sort of ‘British rum’ movement. Since signing up with a distributor Oak and Still, “we’re starting to get bigger order volumes now and we’re at maximum production given that we don’t make a huge amount anyway,” he said. At the moment it’s only Miller, his sister-in-law Ellie and their one still. So the next step is to expand which requires money. He’s planning to launch a crowdfunding campaign in September. As Scratch grows, let’s hope that expansion doesn’t involve Miller being sent on a media training course. That would be a shame.

Master of Malt @MasterOfMalt
13 hours ago
Whip up a Strawberry Shrub #cocktail with Piston Gin! Shake your gin with lemon juice and ice, strain into a glass, add crushed ice and a drizzle of berry cordial, then garnish with fresh berries.

Master of Malt @MasterOfMalt
16 hours ago
Made in the Amazon rainforest with a host of native botanicals, Canaïma Gin is deliciously sharp and fruity – and the brand supports reforestation!

English wineries to visit this summer