We recently visited the Micil Distillery, the first distillery in Galway in over 100 years to talk to its founder Pádraic Ó Griallais about the potential of poitín and more…

I’m a fan of poitín. Maybe it’s the patriot in me. Maybe it’s the historian. It could just be that I love really good booze. It can be hard to find somebody as passionate about the spirit as I am. In Pádraic Ó Griallais, I’ve more than met my match.

Poitín has been distilled for over six generations by his family. The story began in 1848 with Micil Mac Chearra in Connemara, home to the largest Gaeltacht (a primarily Irish-speaking region) in the country. For over 170 years his ancestors have continued to make the spirit in the traditional manner using his secret recipe, predominantly illicitly. That was until 2015, when Ó Griallais gave up his teaching career to turn his legacy into a premium brand and bring back legal distillation to Galway after a century.

Ó Griallais was motivated to start Micil Distillery as he felt there was a terrible void in the poitín category for real authenticity. “There was plenty of ‘paddywackery‘, but I felt it was time to tell an authentic story,” says Ó Griallais. “I come from a family of poitín distillers. The methods have been handed down from generation to generation. My grandfather, Jimmi Chearra (an old picture of him was chosen as the brand’s logo,), taught me everything I know about the craft and heritage. I wanted to spread that appreciation. It was a very touching moment for him to see that Micil’s recipe, Micil’s heritage and his own heritage is now on the open market and it’s being continued. The legacy has been brought into a totally different light”. 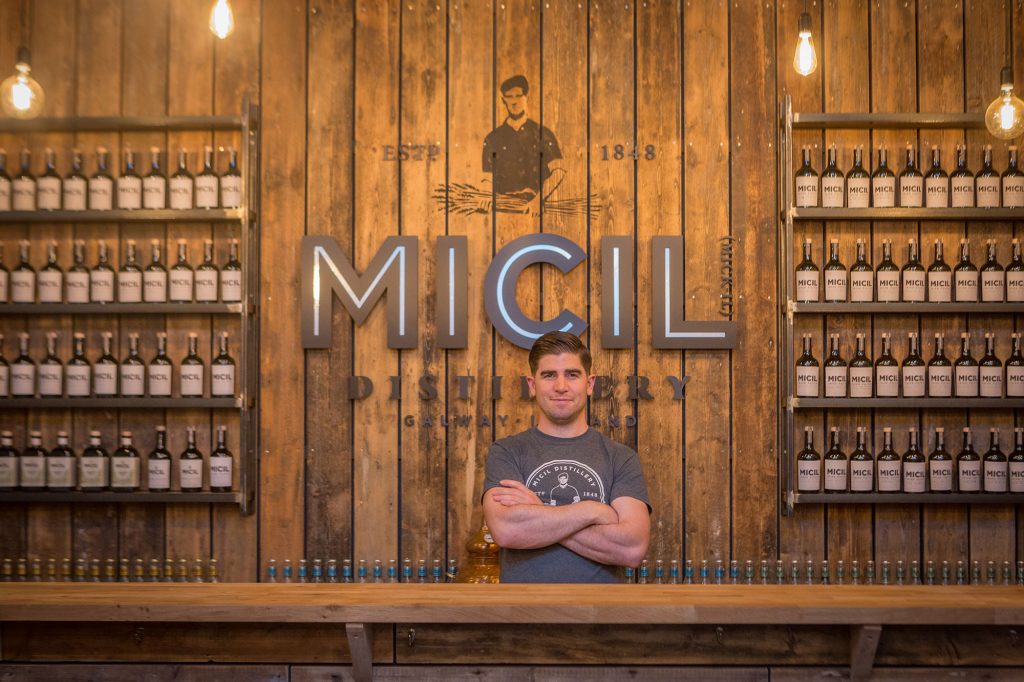 It’s worth remembering the light that was cast on his family’s craft for many years was very different. Jimmi was fined as a younger man when he was caught in possession of malt. His story that he was only using it to brew beer was viewed rather dimly by the local police. If a poitín still, much like the one that sits in the middle of Micil Distillery, was found it would be confiscated and destroyed. Making poitín was a dangerous act of defiance for the people who distilled it, a hidden preservation of community and Irish identity. Ó Griallais talks about this troubled history passionately, pausing to flash a quick mischievous grin before he tells me a story that sums up that spirit of rebellion.

“Probably the most infamous poitín story was about the confiscation of a local still. The owners weren’t known by the local authorities or police but the still was brought to the police station to be destroyed. Nobody could have predicted what happened next,” says Ó Griallais. “That night the station was broken into and the still was taken back. Despite a big investigation, the still was never found and the culprits were never brought to ‘justice’ if you want to use that kind of terminology. We’re not believers of any kind of hearsay or old wives tales, but some people say that the still exists today. Of course, nobody knows for sure.” Ó Griallais then says if I do happen to see it around, I should let him know, before allowing himself once more wry smile and adding, “But you know what? Sometimes it’s amazing what can be right underneath your nose”.

Things are much less controversial for Ó Griallais, who uses the original 170-year-old family recipe in every bottle of Micil Poitín, which combines 100% Irish malted barley and a local Connemara botanical called bogbean. “It’s amazing that we’re still able to use bogbean in our family poitín. It’s a local wild botanical that’s been used since the year 1324 by monks for medicinal purposes and it’s one of the things that really makes Micil’s poitín stand out,” he says. The words hand-crafted and small scale are tossed around a lot these days, but Micil Distillery is genuinely a modest enterprise overseen by Ó Griallais and his brother. Together, they distil approximately 60 bottles of poitín a day. The bottling, labelling and packaging all happen in-house. “We didn’t want the craft to go out of the process and have it become too industrial. It’s romantic, I suppose, and very close to what would have been done throughout the generations”.

The old family still has a remarkable history

For the brand’s Heritage Poitín, Micil brings into play a raw material that is often considered Scottish in the world of booze: peat. “There was no other fully Irish peated spirit on the market when we launched it, so it’s unique, but it’s also something we’ve been doing for generations. We always made peated spirit as well as unpeated in Ireland,” says Ó Griallais. “We found a farmer in County Meath that peated his malt, so we gave him the turf that we harvest ourselves from Connemara. It’s a true expression of what poitín from Connemara would smell and taste like, which is milder than Islay whisky”.

Not everything Micil does is traditional, as evidenced by the creation of its Irish Gin, but Ó Griallais was keen to ensure that it retained the same sense of identity and provenance. His gin was created to showcase the botanicals, the flowers and the herbs available throughout Connemara in a different form to poitín. It’s an approach that bodes well for his upcoming whiskey. “Poitín is always going to be our founding category, so our whiskey will be modelled our poitín process. There will be innovation in terms of the type of whiskey that we do, from the use of grains to the styles. We’re not going to purely make single malt or your typical triple-distilled pot still style. There’s likely to be a variety,” Ó Griallais says.

While Ó Griallais is comfortable engaging with different categories, poitín will always be at the heart of Micil Distillery. It’s not an easy sell, however. One of the reasons why it’s important for Ó Griallais to tell an authentic story of poitín distillation is because it’s such a misunderstood and maligned spirit. “I was brought up making it and recognising the difference between high quality versus mediocrity. Unfortunately, the latter has been the experience of a lot of people in Ireland which means often they have no real appreciation of any of the nuances in the category or what high quality means,” says Ó Griallais. 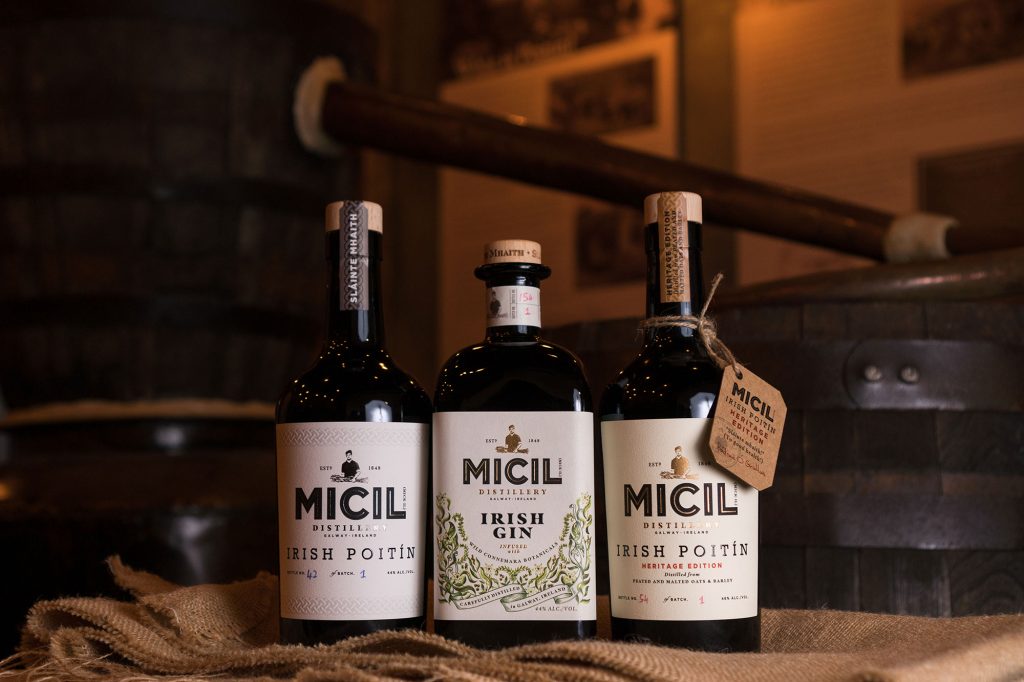 A lot of Ó Griallais’ time is spent dispelling myths about poitín, such as the idea that the sole raw material used to create the spirit traditionally was potato. “In reality, for most of poitín-making’s history it has been a grain spirit and the predominant grain would have been barley. Other grains would have been used with the barley, of course, like oats, wheat and rye,” says Ó Griallais. Then there’s the most damaging and pervasive notion about poitín, a classic criticism that will be known to anybody in Ireland: it’s is a coarse spirit with a dangerously high alcoholic strength. “Poitín is like any other spirit, if it’s made poorly and without due care and attention you are going to get an inferior product,” says Ó Griallais. “It’s the same with historic gin, a lot of amateur or inexperienced people made it with a focus on just on making something alcoholic, there was no care for quality. We had a different take and a different story to tell”.

No amount of misinformation and ignorance can rob the spirit of its tradition, provenance and identity, however, Ó Griallais believes it has potential. He points to the success of Tequila, a spirit category that has previously suffered from its fair share of ignorance, in recent times as an example poitín could follow. “Tequila historically didn’t have the reputation that it does today. But people are now more educated about the category. They have a perception now that it is made with high-quality ingredients, with traditional processes and made lovingly and traditionally in a specific region,” says Ó Griallais. “We want to show people the huge potential and the huge enjoyment that’s available with this spirit. The ambition going forward is we want to drive the poitín category on”.

As you begin a new year there’s an urge to broaden your horizons and grow. Exploring the world of booze and finding a new go-to spirit is as good a way of doing that as any, in my book. Micil Distillery wants you to give poitín a chance. Maybe you should. And that’s not the patriot in me, or the historian talking. That’s the love of really good booze.

Trust the algorithm: The future of AI in booze