Something very special has just arrived at MoM towers, the inaugural single malt whisky from the Copper Rivet distillery in Chatham. It’s called Masthouse and we were lucky enough to be allowed a little taste. Here’s what we thought…

We visited the Copper Rivet distillery back in 2018 and were extremely impressed by the embryonic whiskies we tried. The quality of the new make was obvious as was knowledge, commitment and sheer enthusiasm of head distiller Abhi Banik. You wouldn’t even have to try his products to know that they were top notch. Though of course we did. The distillery has been selling a young aged malt spirit called Son of Gun as an aperitif for a couple of years alongside Dockyard Gin but now we’re very pleased to announce the arrival of the main course, Masthouse Single Malt Whisky. It’s not Kent’s first single malt, that honour goes to a release from Anno Distillers in Marden earlier this year, but it is the first to be made in any great quantity. 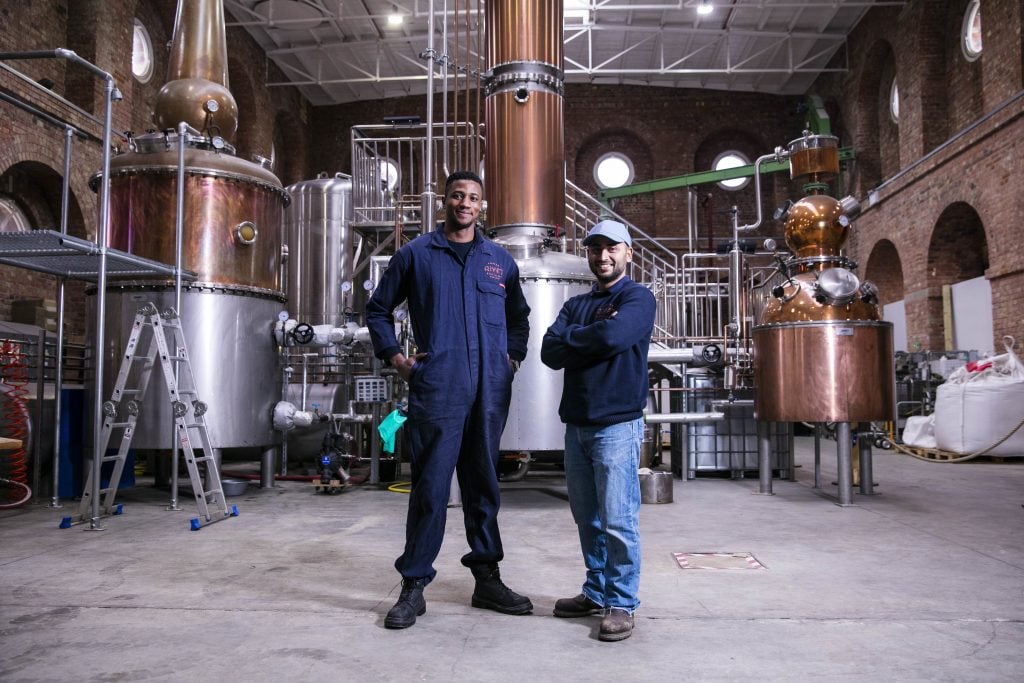 Copper Rivet opened in 2016, it is owned by the Russell family and housed in a beautiful Italianate former pump house in Chatham Docks. The team are mad on provenance and transparency so they have come up with their own version of the SWA rules called the Invicta charter. It’s quite long, you can read the whole thing here, but the main points are that grains have to come from within 50 miles of the distillery, all operations after malting but including fermentation must take place under one roof and it includes a system for labelling whisky that is clear to the consumer stating the grains and type of still used. Co-founder Stephen Russell explained: “This is our declaration of the high standards we apply to making whisky so that our customers can trust and appreciate the spirit. Every bottle clearly details the grain variety we use, the name of the field in which the grain was grown and the barrel numbers from which the spirit was taken.”

The charter is not something the Copper Rivet team expects other people to sign up to though it does outline a possible future for regulating the English whisky. Russell explained, however, that he wanted to keep the flexibility enjoyed by this young industry: “Among the most significant differences between Scotch and English whisky is that England’s whisky distillers are not bound to using only certain types of casks and stills. So we have a big opportunity to be creative and innovative in the way we bring flavour through.” The distillery has produced a video featuring Banek explaining things further.

So let’s get onto Masthouse, the inaugural single malt whisky. It’s a single harvest, 2016, single estate spirit; all the barley was grown on the Isle of Sheppey, about 15 miles from the distillery. The variety used is Belgravia. It’s malted off-site, then at the mashing stage, Banek wants a very clear wort. “A clear wort makes a fruitier spirit. With a cloudy wort you get lots of nutty flavours which I don’t want,” he told us when we visited. For fermentation, “we use two different yeasts, and use half the quantity you’re supposed to use so that we have a slow fermentation.” The wash was pot-distilled and matured in ex-bourbon and virgin American white oak barrels before bottling at 45% ABV with no filtering. There’s a full tasting note below but what is immediately apparent is the delightful fruitiness of that new make. It’s youthful but in no way overpowered by the wood. In fact, there is already quite a bit of complexity. As Russell put it: “With Masthouse whisky we aim to go over the top in our quest to produce a fascinating and elegant whisky which competes with the best from around the world on flavour and quality.” I think they have achieved their aim.

When we visited back in 2018, we also tasted some aged column malt and grain spirits of extremely high quality. These will be released within the next 12-24 months. At some point, when there is more aged stock we hope there might be a blended whisky and the Invicta charter does allow for the release of whiskies blended from more than one distillery, which is really exciting.

Nose: Apple and peachy fruit with cereal notes like malt and oats, with vanilla, cinnamon, marzipan, and a lift of lemon peel.

Palate: Creamy, with a full cereal texture, some peppery alcohol, you can feel the ABV. Smooth and round with porridge, chocolate digestive biscuits and that citrus peel note again.

Finish: Vanilla comes through strongly with oatcakes and custard.

Overall: Young but by no means raw or uncomplex. It’s smooth as hell and packed with flavour.

Copper Rivet Masthouse is available from Master of Malt while stocks last.