Distilleries are more than just factories for making alcohol. Increasingly, producers are seeing them as architectural statements and tourist attractions, as Lauren Eads. From Macallan in Scotland to Pernod Ricard in China, this is the changing face of distillery architecture.

On the face of it distilleries are rather dull, sterile places that don’t lend themselves to visitors. The same could be said of any factory, really. They are practical places that serve a purpose. But while few will have ever had the urge to visit a Coca Cola factory, distilleries have people lining up around the block to take a tour. How?

It’s not by chance. Yes, spirits are inherently more interesting than your average soft drink, but their success as must-visit tourist destinations is a recent phenomenon, one that has happened entirely by design. The Macallan (above) set the bar very high with its £140m mega distillery and visitor centre, which opened in 2018 and was designed by Rogers Stirk Harbour + Partners. The subterranean distillery, situated on the Easter Elchies estate in Craigellachie, features an undulating wildflower-topped roof and impressive visitor centre complete with a walk-through oak ‘forest’ and cask-firing demonstration. In 2019 the design won the 2019 RIAS Andrew Doolan Best Building in Scotland Award.

Since then, a raft of increasingly innovative and bold distilleries, accompanied by visitor experiences, have continued to emerge. Last year, Diageo opened its new eight-floor Johnnie Walker whisky wonderland at Princes Street, the centrepiece of its £185million pound investment in Scotch whisky tourism. It centres around Walker’s ‘Four Corners Distilleries’ — Glenkinchie, Clynelish, Cardhu and Caol Ila – and features “personalisation to a scale never before seen in a global drinks visitor experience”. 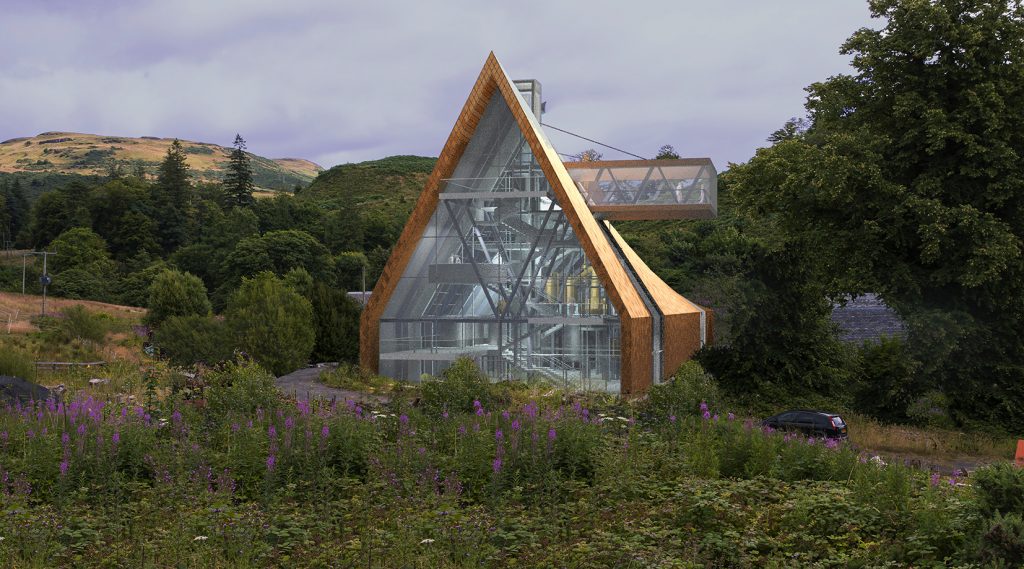 Artist’s impression of the new Ardgowan distillery, not ‘sky platform’ on the right

Last month, plans for the Ardgowan Distillery in Glasgow emerged, an eagerly anticipated multi-million plan delayed by Covid. It will incorporate a Nordic long hall design that will include a ‘sky platform’ with views of the Clyde and a ‘Cathedral of whisky’ visitor experience, designed by Austrian architects Spitzbart and Partners. “This very modern Nordic long hall is pointing skyward, symbolising resurrection and our rise from the ashes of the former Ardgowan Distillery, which burned down in the Greenock Blitz in May 1941, and also our ambition to become one of the top whiskies in the world,” said principal investor Roland Grain. “I hope it will stand out as a ‘cathedral to whisky’ and put this corner of Inverclyde firmly on the tourist map.” Pending approval, construction is expected to start later this year, with the site expected to be operational by 2023.

So what’s driving these architectural beacons of distillation? “The biggest trend has undoubtedly been to accommodate not just visitors, but beautiful architecture,” says Ian Stirling, founder and co-CEO of the upcoming Port Leith Distillery in Edinburgh. “Think of the stunning feature windows that frame the stills at Lindores Abbey in Fife, or Clydeside in Glasgow. There’s a growing confidence in Scotland that we can entirely reimagine what a distillery should look like.” 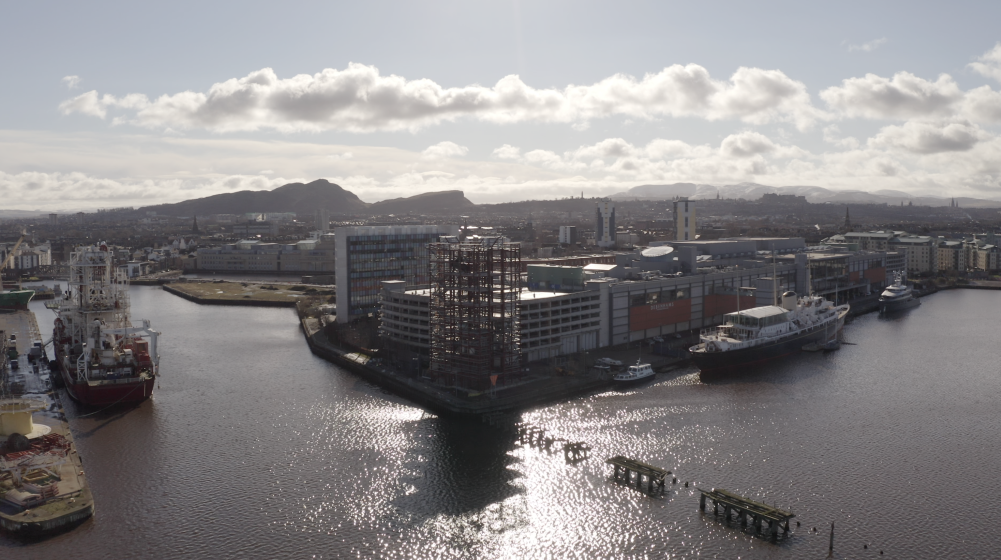 Rising above Debenhams, it’s the Port of Leith distillery

Vertical and round distilleries

Stirling’s own Port of Leith Distillery is an innovative 40m vertical distillery due to open in the autumn of 2022. Based in Edinburgh’s city centre, space was limited, so a vertical structure made sense. “We’d never set out to build a vertical distillery, but it quickly became apparent that the only way was up,” says Stirling. “We did, however, set out to design a contemporary piece of architecture – something that would reflect the new and modern approach that we’re seeking to take with our spirit. We’re new, we’re not old, so don’t try to look old.” Its operations are gravity-based, with production starting with grain milling and mashing at the top, through to fermentation and then distillation at the bottom.

Elsewhere, plans have been unveiled for a new “drum-like” distillery on Islay. The ili (sic) Distillery has been designed by Alan Higgs Architects (see photo in header) with completion set for summer 2023. Based at Gearach Farm, near Port Charlotte, the distillery aims to be carbon-neutral and is the vision of Bertram Nesselrode, whose family owns the farm, and Scott McLellan, a local farmer.

While most of Islay’s distilleries follow a ‘shed’ type design, (rectangular with gable roofs and white walls), this design is circular. “Whilst not typical for distilleries, it is a shape that is the most efficient way to enclose space, maps the process of making whisky, evokes naturally the tuns, tanks, pipes, stills, barrels and bottles that are emblematic of spirit making and makes a building that is rooted in its landscape,” the firm says.

Traditional distillery designs do seem to be falling out of favour, certainly among new producers that are building their brands from scratch, quite literally. “Ten years ago, there was perhaps still a desire for some to seek comfort in the traditional white building, pagoda-topped image of what a Scotch whisky distillery should look like,” adds Stirling. “The increasingly ‘innovative’ and ‘artistic’ distilleries that we’re beginning to see constructed are really reflecting the increasing confidence that there is to present a new and modern outlook in a very old and traditional industry.” 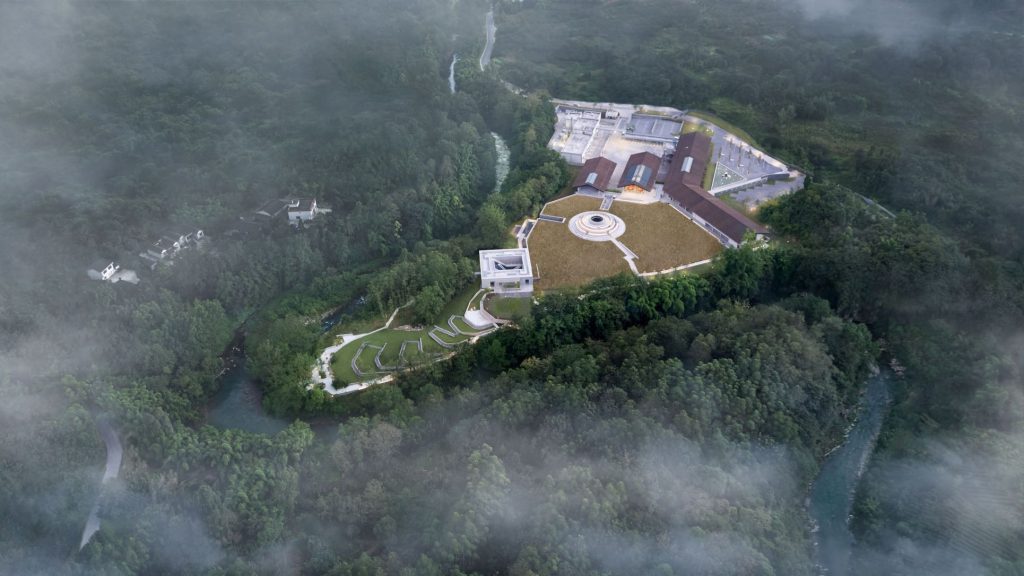 “We’ve been expecting you, Mr Bond”

Bold moves are being made outside of Scotland, too. Last year, Pernod Ricard completed work on a new US$150m stone-clad distillery in Emeishan in China’s Sichuan province (above). Built to become a “world-class destination for whisky, arts and culture” and draw two million tourists in its first decade, the Chuan Malt Whisky Distillery is China’s first malt whisky distillery, and was designed by award-winning Chinese architectural firm Neri&Hu. The distillery was built with a “timeless architecture that strikes a harmonious balance with the landscape, a design that embodies the refined sense of artistry embedded in whisky-making and blending”.

In the US, plans have emerged for a pyramid themed distillery (which will be built into a quarry) designed by Japanese architect Shigeru Ban for Kentucky Owl Bourbon. While Rogers Stirk + Harbour has designed a distillery for Horse Soldier Bourbon in Kentucky, a brand founded by retired US Special Forces servicemen and named after US soldiers who fought on horseback in Afghanistan in the weeks following 9/11. Its plans include a water garden and replica of America’s Response Monument, which is located at Ground Zero in New York and unofficially known as the Horse Soldier Statue.

Building a distillery is ultimately about the practical job of producing whisky and generating revenue. But it’s also an unmissable opportunity to stand out and be seen – an exercise in branding and longevity. And that’s not been lost on modern whisky producers, no matter how big or small.