Henry Jeffreys
No Comments on Visiting the revamped Clynelish Distillery

The revamped, all singing, all dancing Clynelish Distillery is open as part of Diageo’s Four Corners of Scotland whisky tourism push. We paid it a visit to see what all the fuss is about.

I can promise you that you’ve never had a distillery tour quite like the one at Clynelish. Our guide was an ebullient Irishman called Daragh Daly. He’s a former bartender who moved to Sutherland to work at Clynelish because he loved the whisky so much. Which is as good an endorsement as you’ll get. Though at the time of writing, he has already moved on so it seems he had a better offer.

It’s hard to write about the tour because I don’t want to give too much away but it works on a sort of escape room system. Don’t let that put you off, you won’t get trapped anywhere, but there are clues and secret doors, compartments, and surprises. It’s clever, fun, and a great way to engage with non-whisky fans.

The tour starts in a darkened room with a long table. With its mixture of wood and high tech, it reminded me of Goldfinger’s combined games room and dastardly planning HQ in the James Bond film.

Along the way, we learned about the turbulent history of this part of Scotland. Brora means bridge in Norse – the area was heavily influenced by the Vikings. Following the Highland clearances, when crofters were forced off the land, Brora became, you might be surprised to learn, something of a modern industrial town. The first in the Highlands to have electric light – it was known as an electric city with a booming economy based on coal mining and sheep farming. 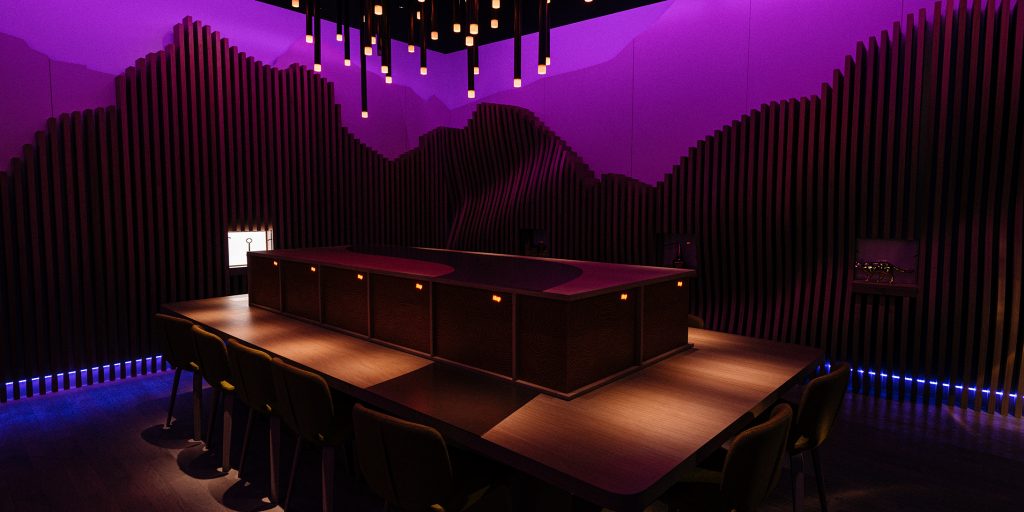 We’ve been expecting you…

It is also good barley country, hence an ideal place to make whisky. Clynelish distillery dates back to 1819. But the modern distillery wasn’t built until 1967 when it was known as Clynelish B. In 1968, Clynelish A was changed to Brora, and after making great whisky which wasn’t fully appreciated, it closed in 1983, only to reopen last year. While Clynelish B became simply Clynelish.

The idea was to make a similar fruity waxy whisky that was in demand for blends like at the old distillery but on a bigger scale. Sadly, our time was short so we didn’t get to look around the production site. It was either see that and miss Brora and I didn’t want to do that but we did get to taste some whisky.

The stillhouse is part of the standard tour – so don’t worry. There are two stainless steel and eight larch washbacks. Fermentation is very long by Scotch whisky standards, 85 hours. There are six large stills with the spirit stills being, unusually, larger than the wash stills. It was a shame we didn’t get to see the famous spirits receiver where the build-up of natural oils is said to contribute to Clynelish’s trademark waxy flavour.

There is no right or wrong answer

As we’ve come to expect now from a Four Corners distillery, the emphasis was on flavour rather than the technical side of whisky production. We were given two containers to smell one which was supposed to smell like tropical fruit but to me smelled more like citrus peel. The other smelled like violet refreshers. Daly then explained how the long fermentation creates these aromas which we would find in the finished whisky. One thing we didn’t smell was smoke because Clynelish uses unpeated barley (though in the past it seems that it was lightly peated.) Also as with the other Four Corners tours, there were plenty of assertions presented as facts: “wine is proscriptive, whisky is descriptive” or “there is no right or wrong answer.”

Nowadays, something like 95% of Clynelish’s 5 million litre annual production goes into blends. This link with Johnnie Walker goes back to the early 20th century. Daly brought out a photo of a 1908 ledger showing the purchase of first fill and second fill sherry casks of Clynelish. According to Daly, blends designed to be drunk as Highballs would have a high proportion of heavily sherried malts. I’m not sure how accurate this is as it’s roughly the opposite of what Nick Morgan says in his history of Johnnie Walker, A Long Stride. 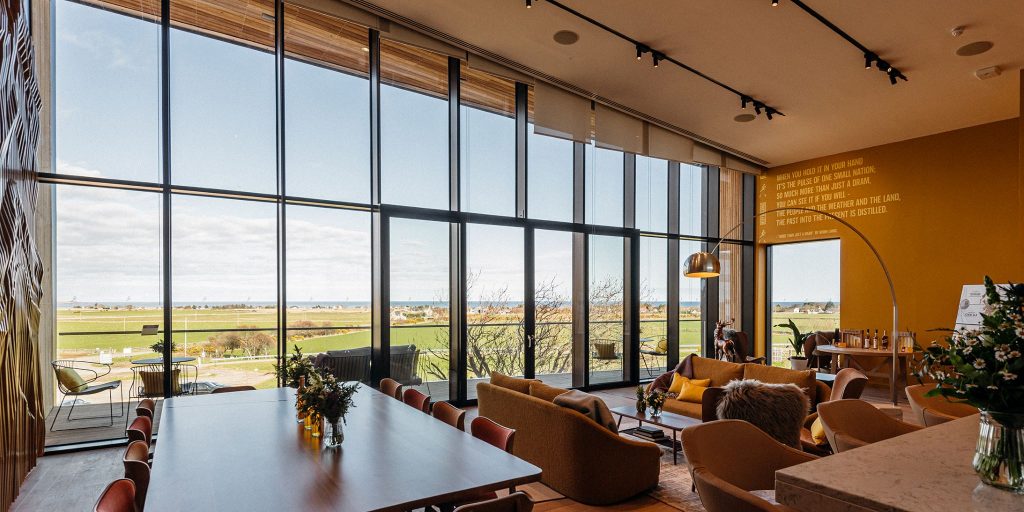 Drink in that view

And now for the best bit…

Anyway, Clynelish nowadays is mainly aged in ex-bourbon casks. There are tasting notes below for those who are interested but in short, this is a fantastic whisky. It’s all about fruit combined with an amazing texture and lots of creamy American oak. The demand from blends means that Clynelish isn’t as well known as it should be. Certainly, it’s not one that Diageo pushes like say Talisker or Lagavulin.

Having had the privilege of trying some classic ‘waxy’ Broras over the years, I can say that Clynelish offers much of the magic for a very reasonable price. If you love tropical fruit, then the distillery exclusive in particular will be right up your street. I’ve now started looking for old Clynelish bottlings though sadly these are rare and not cheap. Oh well, I’ll just have to stick with the excellent 14 years old.

After the tasting, we had an elderflower highball with Johnnie Walker Gold, a Clynelish-heavy blend – very tasty but not very whisky – and stood back and enjoyed the stunning view over Sutherland while strange plinky-plonky house music played like being in a lift in a trendy hotel.

Having now visited two of the ‘four corners’, Glenkinchie, and Cardhu. I wasn’t expecting to be surprised at Clynelish, but the team really has come up with something totally different. It’s well worth the journey north and of the three, it’s the one that will appeal both to people who are just looking for a day out, and hardcore whisky nerds like us.

Clynelish Distillery is open to the public. Go here for more information. 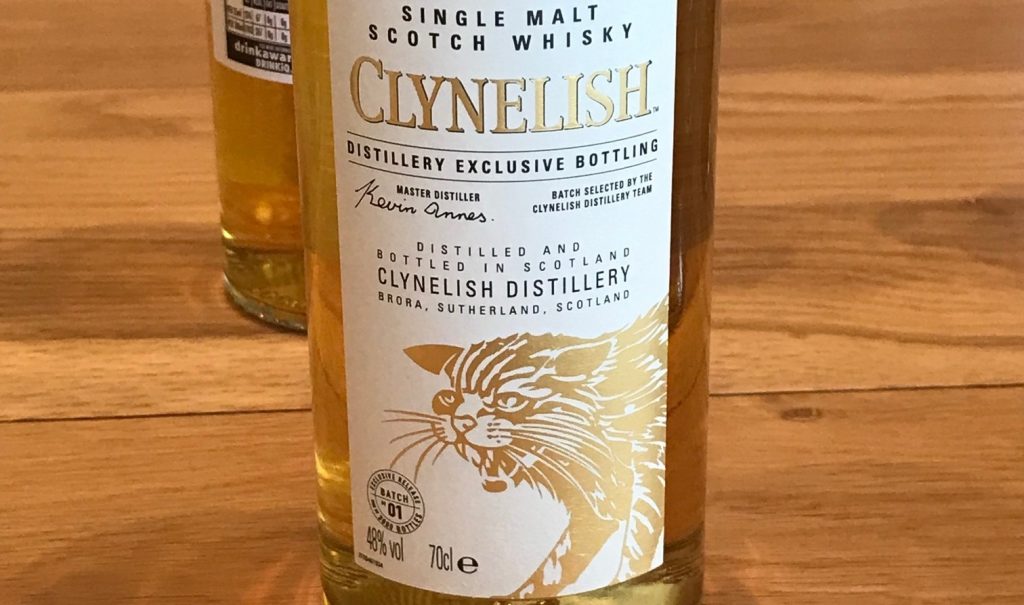 Aged mainly in ex-bourbon casks and bottled at 46% ABV

Palate: Big punchy fruit on the palate, so much distillery character, creamy vanilla,

This is a fill-your-own-bottle distillery exclusive at 59.7% ABV.