Royal Salute is back with another exciting new release! To celebrate the new 29 Year Old Pedro Ximénez cask finish, we headed to Seville with master blender Sandy Hyslop and creative advisor Barnabé Fillion to learn all about the history and processes behind the blend.

“I think we’ve been pretty humble with Royal Salute for years and years,” Sandy Hyslop tells me. His pride is evident and, after a few days in Seville learning all about the brand, I can see why. It’s the only whisky brand which has consistently has a 21 year old expression since its origins in 1953, which is also the youngest blend in the brand’s portfolio. Royal Salute was first created as a gift for the coronation of Queen Elizabeth II, the inspiration for the latest release, a 29 Year Old blended malt finished in Pedro Ximénez casks, came from the Queen’s first royal visit to Spain in 1988, hence the sherry wood. Rather appropriately, the new expression is presented in a deep red ornate porcelain bottle, rather than the blue we’ve seen before. 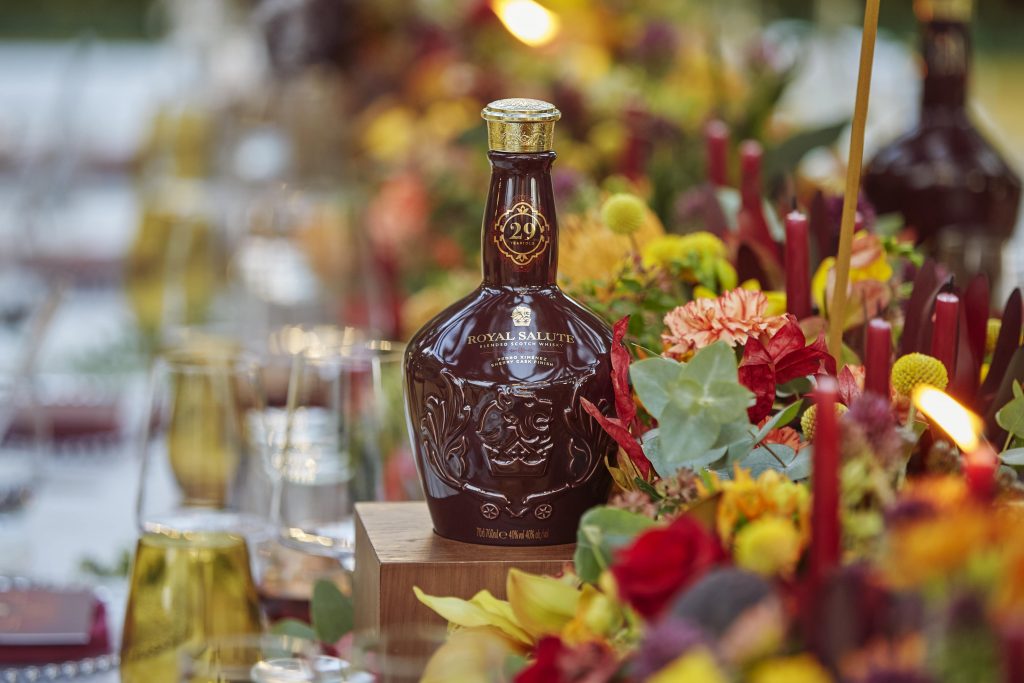 The Royal Salute 29 Year Old PX finish, in all its glory!

This is a first for Royal Salute, which hasn’t finished a whisky exclusively in sherry casks before. “With this release, we’ve done everything as it should be done,” says Hyslop. The blend was finished in sherry casks for 18 months or so, though the processes to source the casks began around four years before the whisky entered the wood. The casks used for this expression are custom-made from Spanish oak to hold Royal Salute. PX is so viscous that if it’s filled straight into new oak, it won’t be able to permeate the wood. So, after the cask has been dried for around 18 months, it’s first filled with Oloroso sherry for two years to prep it for the PX. Hyslop and Fillion even popped over to Spain to choose exactly which PX they wanted. 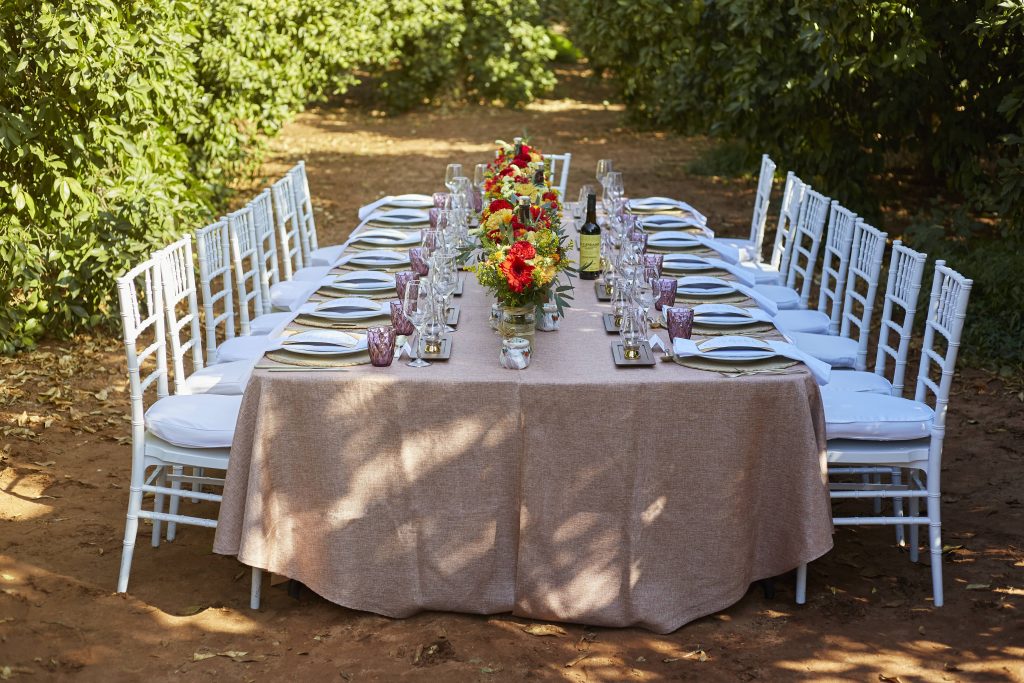 The Ave Maria orange grove, not a bad spot for lunch…

We make our way to the Ave Maria orange grove just outside of Seville. Wandering through the orange trees and scent of orange blossom, we come to a clearing that is to be where we have lunch. Next to a glass of the 29 Year Old there is an incredibly dark, viscous liquid, revealed to be the PX sherry used to season the whisky casks. No wonder they chose this one: it’s like nectar, dried fruits galore, choc full of cherries and liquorice. There are murmurs around the table, many people are saying that this has converted them to sherry, and that they can’t wait to try some when they get back home. Hyslop later tells me, “they’re going to be so disappointed.” This PX is over and above exceptional. 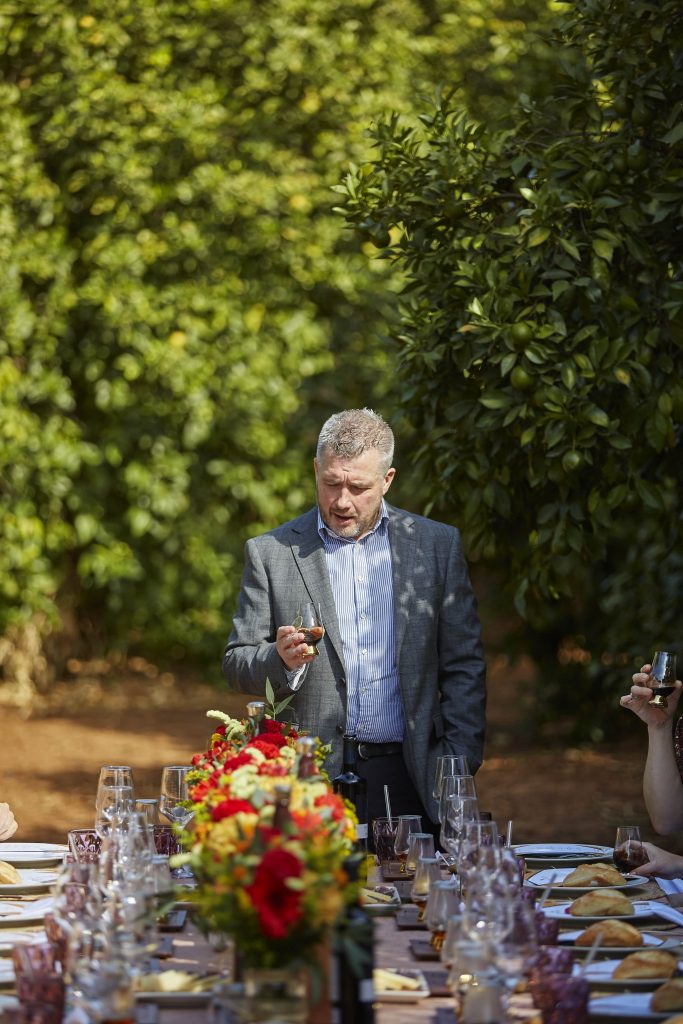 Sandy Hyslop tasting us through the awesome PX sherry.

Then it’s time to try the whisky. “The first time, seven years ago that I tried Royal Salute, Seville orange was the first thing I picked up,” Fillion tells me. What better spot to try the whisky than here? On the nose, there is indeed that classic Royal Salute chunky orange marmalade, along with sandalwood, treacle toffee, ginger spice, liquorice and loads of plump sultanas. It’s incredibly rich and complex on the palate, and tried next to the PX, the sherry influence shines. There’s plum, honey, dark chocolate-coated almonds, and more treacle toffee. Vanilla and syrupy fruits appear, with prickles of spice around the edge. The finish just goes on and on, taking an age to disappear thanks to the use of top quality casks. 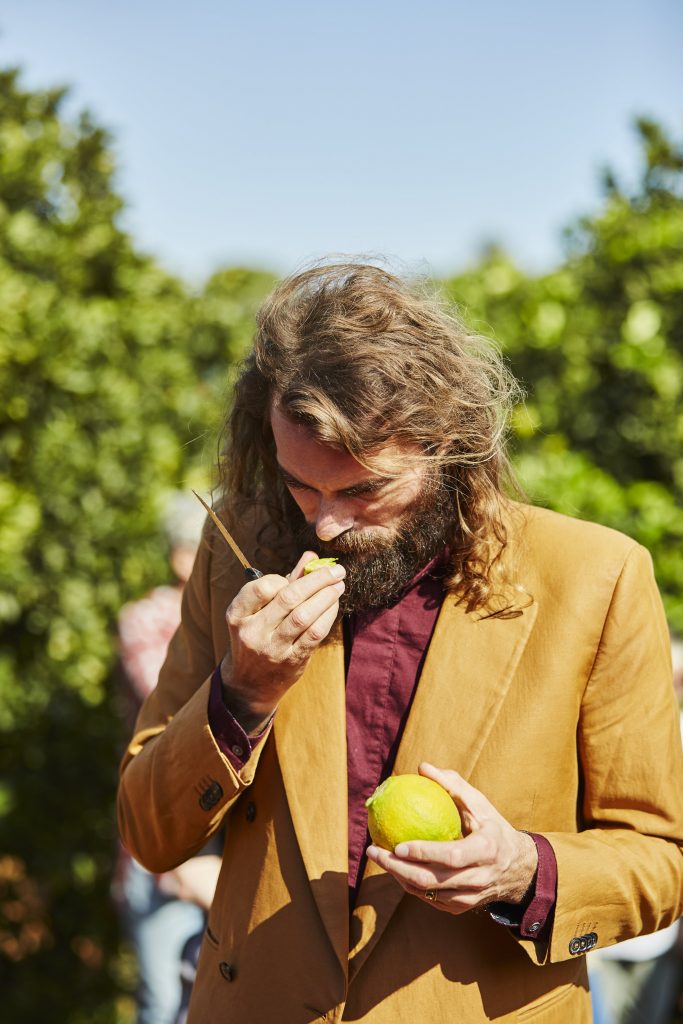 Barnabé Fillion and some Seville orange. On the nose of the whisky, on the trees, it’s everywhere!

“A 29 Year Old in a sherry cask… It was a dream for me,” professional nose Barnabé Fillion tells me. Fillion has been in the perfume business for most of his adult life, having created scents for brands like Aesop while also working as an independent perfumer, joining Royal Salute as creative advisor for the brand in 2016. Evening draws in, and a sensory dinner (which is really more of a banquet) hosted by Fillion awaits us for our final evening in Seville. He begins by telling us the 95% of your sensory experience comes from your nose; now there’s no excuse for not nosing your whisky first. He wants to flood our senses, giving us new experiences and olfactory memories. “You may end up feeling a bit overwhelmed, but this is sort of the point,” Fillion says. To help us dissect the nose of the 29 Year Old, Fillion has deconstructed it scent by scent. Various oils are dipped onto paper, there’s incense, and some scents are presented on 3D printed ceramic, which more accurately replicates how a scent appears on your skin. 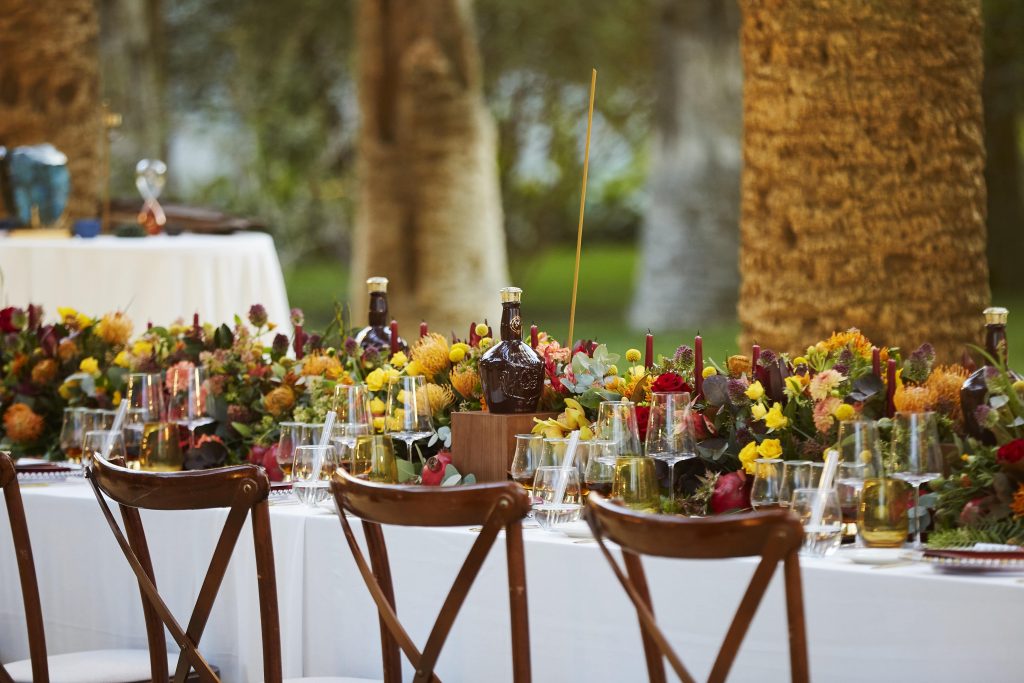 Incense, flowers and whisky – Fillion’s sensory dinners have it all!

Sandalwood incense is passed around the table, leaving a trail of aromatic smoke, as well as sandalwood oil, which has an almost milky scent while still remaining dry. Then there’s the rare scent of vanilla orchid, which is creamy and intensely floral. Then, vanilla extract obtained through Co2 extraction comes around, which captures it in its purest form, and at first nobody is quite sure what it is. Usually vanilla is associated with sweetness, though this is so earthy and raw. The point of this is to pick up these subtle notes in the whisky, which we have to nose alongside these various scents.

If you were to hold your nose while eating or drinking something, then you wouldn’t be able to taste anything. It’s why having a cold is totally rubbish. So, scent has a huge impact on our taste, and they are completely intertwined. Having said that, smell and olfactory is pretty subjective as it relies on your past experiences, smells and memories. So how does somebody like Fillion ensure that each person gets the same experience out of a certain scent? Well… he doesn’t. “I don’t want to standardise your experience, I don’t even want to guide it,” Fillion tells me. “I just want to plant some little seeds that will make your tasting even more interesting.” For Fillion, the whole idea of this olfactory is to “celebrate your subjectivity and life experience,” and give us the vocabulary to describe our sensory experience, rather than create it. 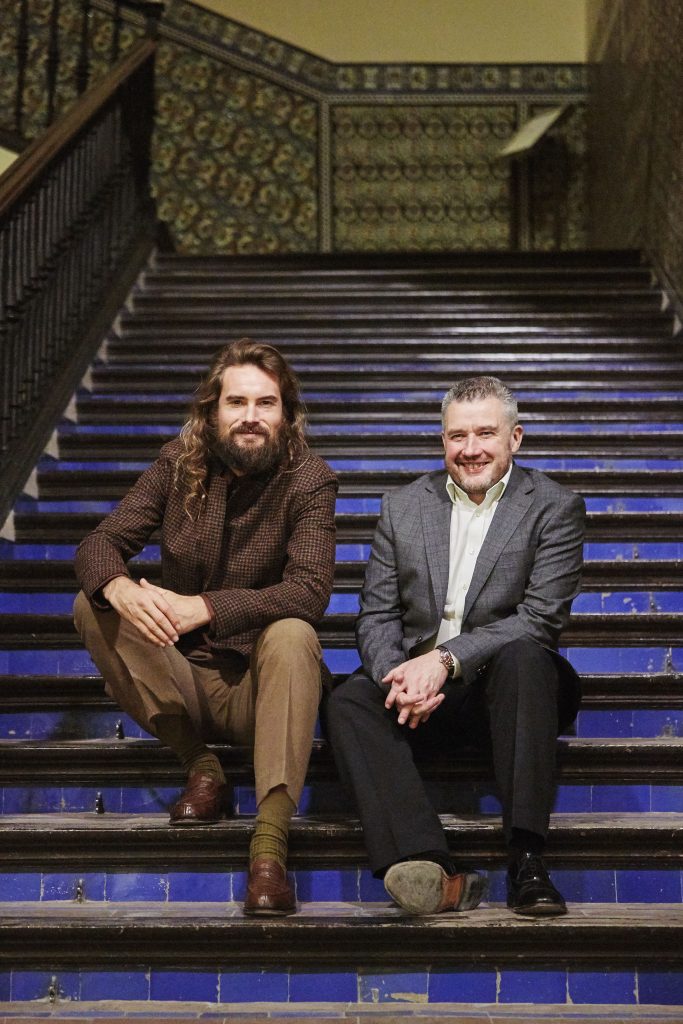 Hyslop and Fillion, the dream team!

“I think this is a bit of a golden period for us,” Hyslop tells me, referring to the explosion of new releases for the brand. Throughout his tenure Hyslop has made history, bringing three new expressions into the range where only one stood before for decades, with the Malts Blend and Lost Blend released earlier this year, and now the 29 Year Old. He’s not done yet either, and is now laying down casks that he will never see come to fruition, the responsibility of future stock on his shoulders. So, what’s next for the brand? Quite simply, more experimentation, namely in the form of cask finishes. “We need to start saying, ‘this is what else we can do’,” says Hyslop. “If we want to do Port, we’ll try and do Port.” Of course, whatever cask finish comes next will go through the same rigorous process to seek perfection. “Consumers want different things now,” Hyslop continues. “If it’s not right, we’re not doing it.” That in itself sums up why Royal Salute has had such success, as well as only a small handful of core releases throughout its 66 years. 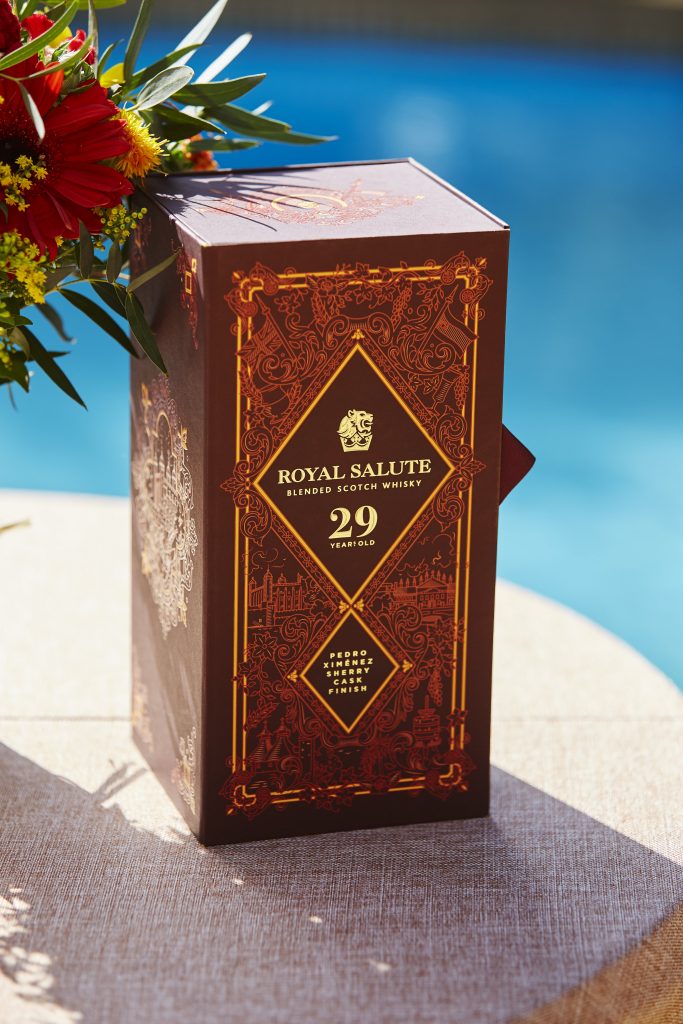