Millie Milliken
No Comments on The peculiar allure of smoked drinks

Whisky, salmon, salt, mezcal, paprika – you name it, we’ll put smoke in it. But why do we love the flavours and aromas of smoke in our drinks so much? Millie Milliken asks those in the know, and tries to explain the peculiar allure of smoked drinks.

Most summers of my late teens were spent sitting around a firepit into the early hours, a bowl of Strongbow cider in one hand (we’d run out of cups) and a powerless, useless Nokia in the other. For the weeks that followed everything smelt of smoke. Everything, no matter how much vinegar or baking soda it was bathed in. 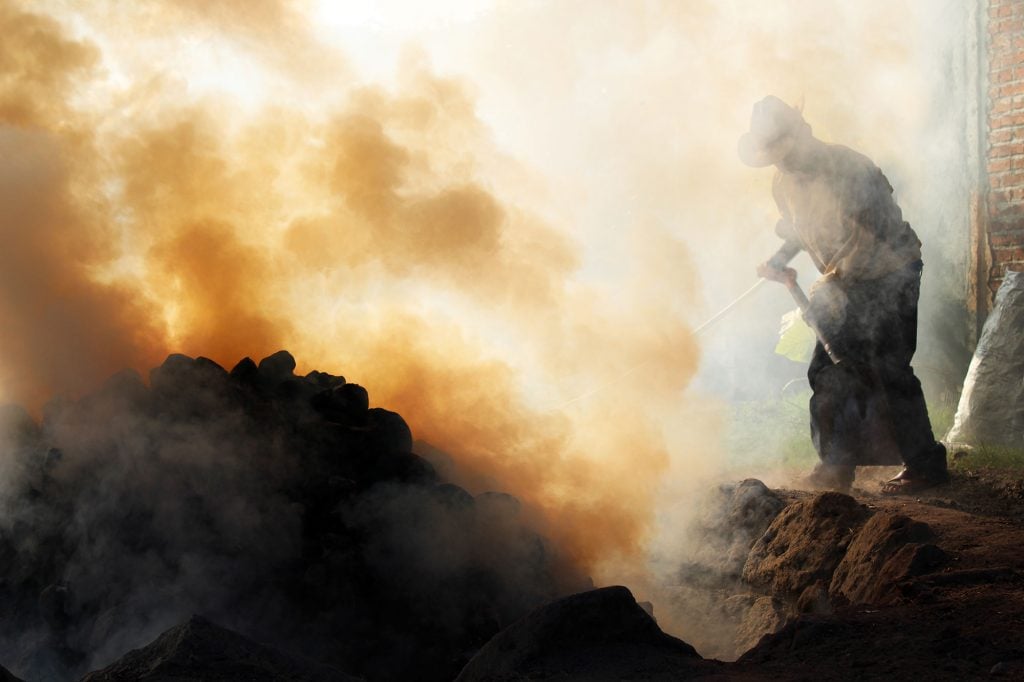 While the smell of smoke certainly isn’t for everyone, for myself – and countless Scotch and mezcal drinkers – the addition of smoke aromas and flavours are (if well balanced) a welcome characteristic in a drink. When I ask Deano Moncrieffe, owner of agave bar Hacha in London, whether he thinks smoke is becoming a more popular flavour for customers, his answer is less than vague: “100% yes! We now have many customers coming to a bar and asking for smoky cocktails,” he tells me.

He’s also seen more and more bars using the word ‘smoke’ on their menus to describe a cocktail in the knowledge that “consumers won’t be afraid of the word when they see it”. Smoked Negronis, Smoked Daiquiris and Smoked Old Fashioneds – even Smoky Martinis – have all passed my lips.

Smoke in drinks isn’t anything new. There’s the use of peat in Scotch (particularly from Islay) whisky production which, when burned, produces a range of smoky flavours (or compounds called phenols). Or while the traditional method of cooking agave in pits to make mezcal imparts a smoky flavour ranging from the subtle to the volcanic. But why do we like the smell and taste of smoke so much? And why in our drinks?

In a 2014 article for the Washington Post, ‘Smoke: Why we love it for cooking and eating’, barbecue and grill expert (yes) Jim Shahin traces it all back to our ancestry: “Of the three elements of flavour [taste, physical stimulation and smell], it’s smell that rocks our dawn-of-man world,” he writes. “That’s because the sense is lodged in an ancient part of the brain called the limbic system, which houses emotion and long-term memory. Smells trigger personal memories as well as atavistic, or ancestral, ones. ‘In evolutionary terms, we all started cooking with fire,” Marcia Pelchat, a sensory scientist at the Monell Chemical Senses Center, says. “That smoky smell is a really strong stimulus’.”

When relating this directly to whisky, Charles MacLean in his 2004 book MacLean’s Miscellany of Whisky agrees. “Perhaps the big Islays, the smokiest of all malt whiskies, recollect the whiskies of the past. And perhaps one of the reasons for their current popularity is their ‘authenticity’, their ‘heritage’. An atavistic folk memory, like candles and open fires, Christmas trees and stormy nights.” 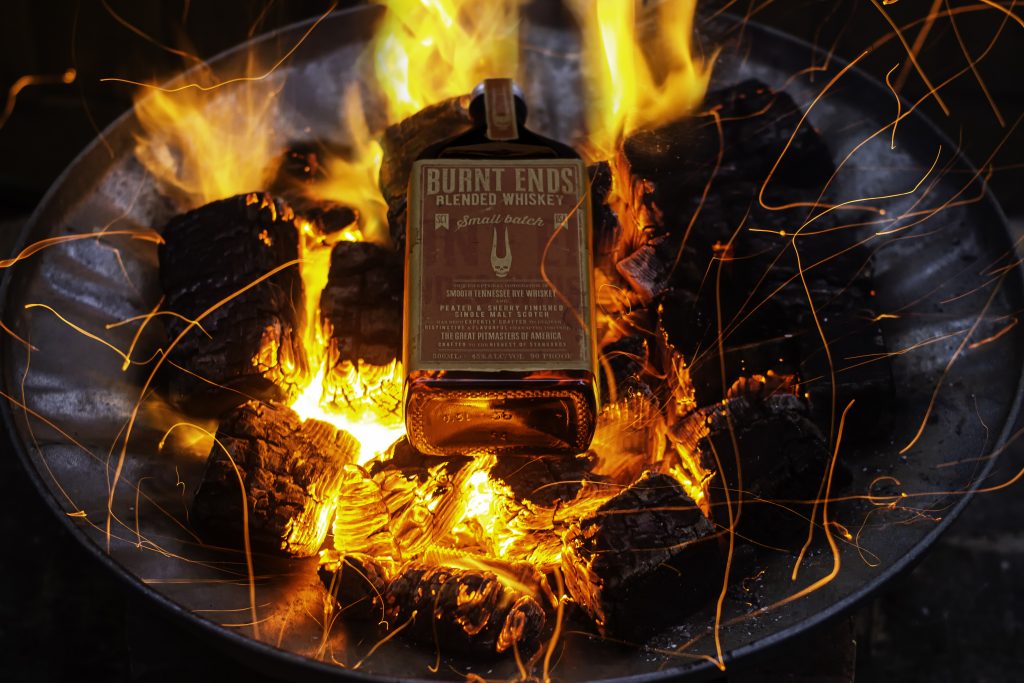 For Sam Simmons, head of whisky at Atom Brands (Master of Malt’s sister company), seeking out smoke can be something to boast about: “Seeking out smoky whisky is almost like a badge of honour in the [same] way [as] higher ABV, or IBU (International Bitterness Units) in beer or SHU (Scoville Heat Units) in chilli sauces.” One product to come out of Atom Labs in the last year is Burnt Ends, a blended whisky from Scotland and the USA, combining a 4-year-old Tennessee rye whiskey with a heavy sherried 10-year-old Islay whisky. As the name suggests, the liquid conjures plenty of smoke.

Simmons also mentions the other methods Atom uses to get smoke into their whiskies, such as using casks that held peaty whisky to hold unpeated malt to get some of that character. He also notes that in the USA, he knows distillers who infuse raw materials (corn, wheat, rye or malt) with hickory, cherry, apple or other woods to obtain a certain flavour that get carried through mashing, fermentation, distillation and maturation. While others infuse the final spirit with smoke from particular woods, aerating or allowing the smoke to flow through the spirit itself. And when it comes to Iceland and Australia, “I know distillers who use dried livestock dung to dry their barley”. Tasty.

When mezcal brand The Lost Explorer came onto the scene in 2020, the agave category was going from strength to strength and bringing more smoke into peoples’ palates. “The Lost Explorer is what I would describe as agave led or agave forward in its flavour and as you progress through the varietals, the smoke aroma changes and develops in different ways,” explains Moncrieffe who acts as the brands ambassador in the UK.

What determines the smoke profile in the three expressions is the cooking time, the amount of volcanic rock and the reclaimed wood used. He describes the Espadin as having “sweet smoke”; the Tobala a “more cigar kind of smoke” and the Salmiana as “more spiced smoke”. 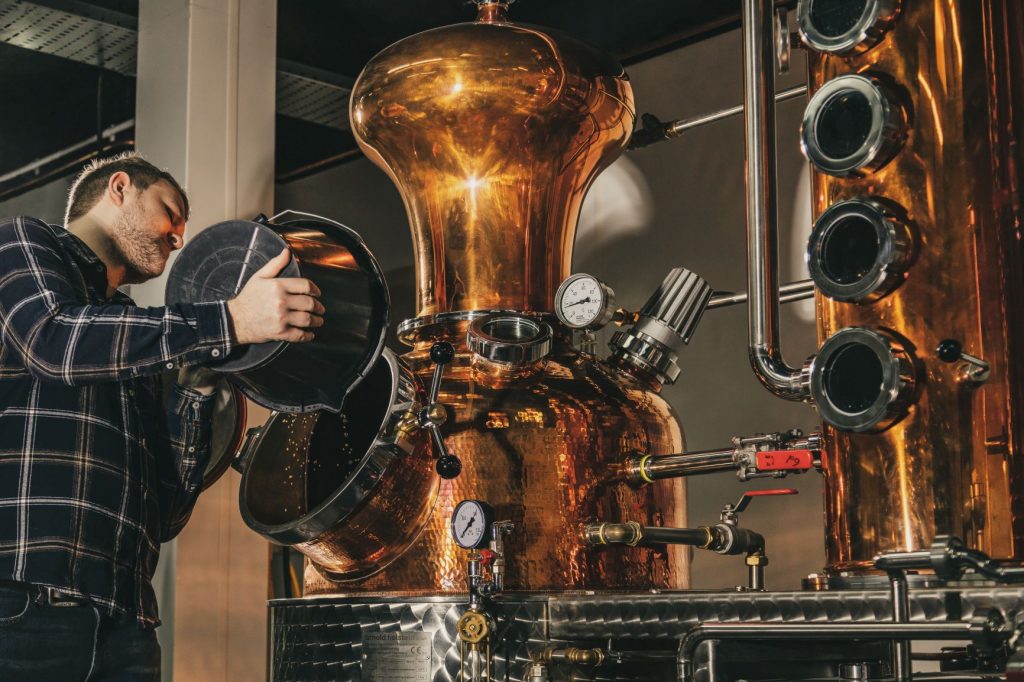 The still at 1881 distillery in Scotland

It isn’t just whisky and mezcal that can bring the smoke. The Chase Distillery (previously of Tyrells crisps fame) launched an oak-smoked vodka in 2010, designed to use in Bloody Marys while more recently, Scotland’s 1881 Distillery (which opened in 2018) launched its own smoked gin, Rafters. The distillery, which is housed within the Peebles Hydro Hotel takes inspiration from a fire that ripped through the original hotel in 1905.

“We use fresh oak smoked water to achieve a light, savoury smokiness,” says head distiller Dean McDonald of how they created the smoky expression of their original 1881 Gin. “We didn’t want heavy peat smoke-style phenolic flavours that may have overwhelmed the carefully considered balance of our botanicals.”

Achieving that sweet spot of smoke intensity is judged by taste and smell alone, as the smoke intensity in the water can vary. For McDonald the smokiness of the gin brings out the spicier notes while also adding a velvety creaminess, and is an expression that would suit smoke lovers as well as drinkers of dark spirits like rum or whisky.

That whisper of smoke – as opposed to a shout – is something that Simmons finds appealing too: “In blending, a little smoky whisky goes a long way and, in tiny amounts, doesn’t always even register as smoke but as some sort of umami, some memory of Maillard effect – it just adds that yummy yummy.”