Whisky brands don’t often come 300 years in the making. They don’t often launch with bottles of 50-year-old Glenlivet. But Finn Thomson whisky arrives on the scene with a family legacy, a whisky heritage, and stock in abundance.

The Thomsons are a proper whisky family. Their legacy spans nine generations across three centuries. Through the ages, various members have distilled, blended, traded, and bottled – and in the process cultivated a long relationship with Scotland’s national spirit that spans the days of the illicit pot still to the blended whisky boom, and beyond.

Now the baton has passed to Finn Thomson, our host yesterday in the small village of Grandtully, the brand’s spiritual home, in more ways than one. In the company of his parents, sister, and grandfather, he launched his new independent bottling brand which will be supplied by the Thomson family cask collection. A mere 250 years after his ancestors’ first distillations, we took a guided tour of some Thomson landmarks while tasting this impressive first roster of whiskies. 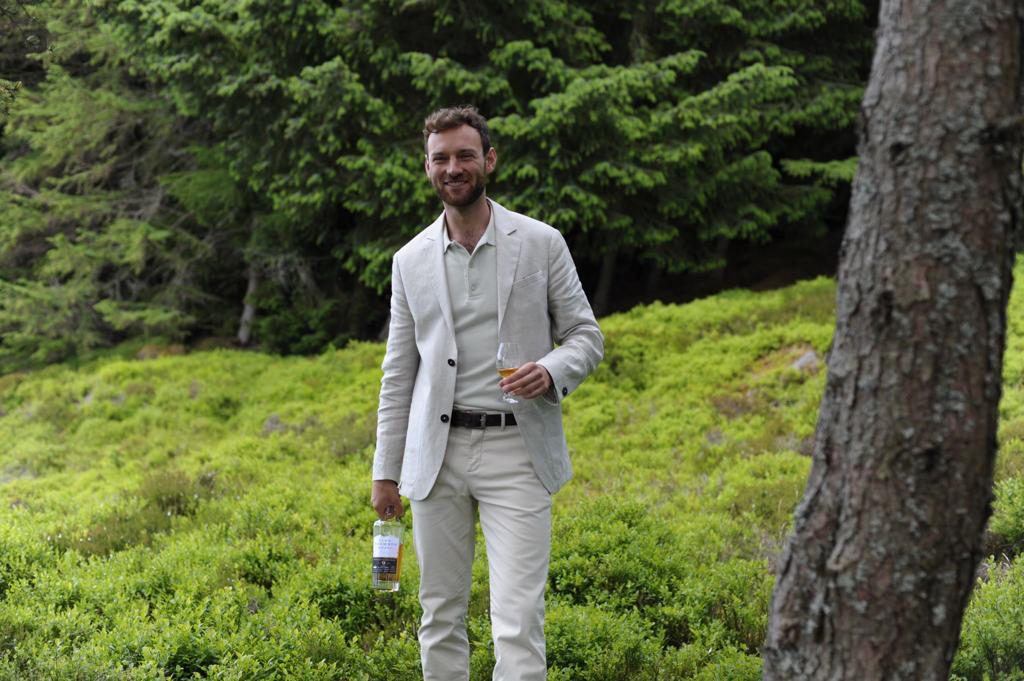 The Thomson whisky story begins with a record, one that shows James Thomson distilling from his Perthshire farm dates back to 1772. What he started was something of a dynasty. After James Thomson there were cousins Donald and John Thomson, who in 1838 acquired the Grandtully distillery which remained in family hands until it closed in 1914. An entry from everyone’s favourite Victorian whisky writer Alfred Barnard described it as being the smallest distillery in the UK and “the most primitive work we’ve ever seen”, where about 20,000 litres of whisky was made per annum from peat from the moors and two stone-built warehouses housed 200 casks of malty spirit. Nothing remains today but charming anecdotes and a nearby cottage called ‘Distillery House’.

John’s son Alexander was the first the realise the potential of Perth, opening a grocery and whisky shop. Perth was an epicentre of whisky once, where the old whisky barons reigned from giant warehouses, galvanising the area and the Scotch whisky category alike by creating many of the classic blends we know today. It was a melting point of smoky western whisky, rich fruity northern malts, and light Lowland spirit that were married to make a product exported around the world.

One of the biggest names was Peter Thomson, who truly put the family on the whisky map. He made his mark after establishing his own business in 1908 at 202 High Street Perth. Alongside Matthew Gloag (The Famous Grouse) and Arthur Bell (Bell’s Whisky), he was a pillar of Perth, the place in which he created a premium whisky called Old Perth and, more significantly, the Golden Beneagles blended whisky empire. A big portion of this liquid was Macallan, which the family made the instrumental decision to sell on its own in the 1960s, well before the reputation it has today was established. As I said, the Thomsons are a big deal. 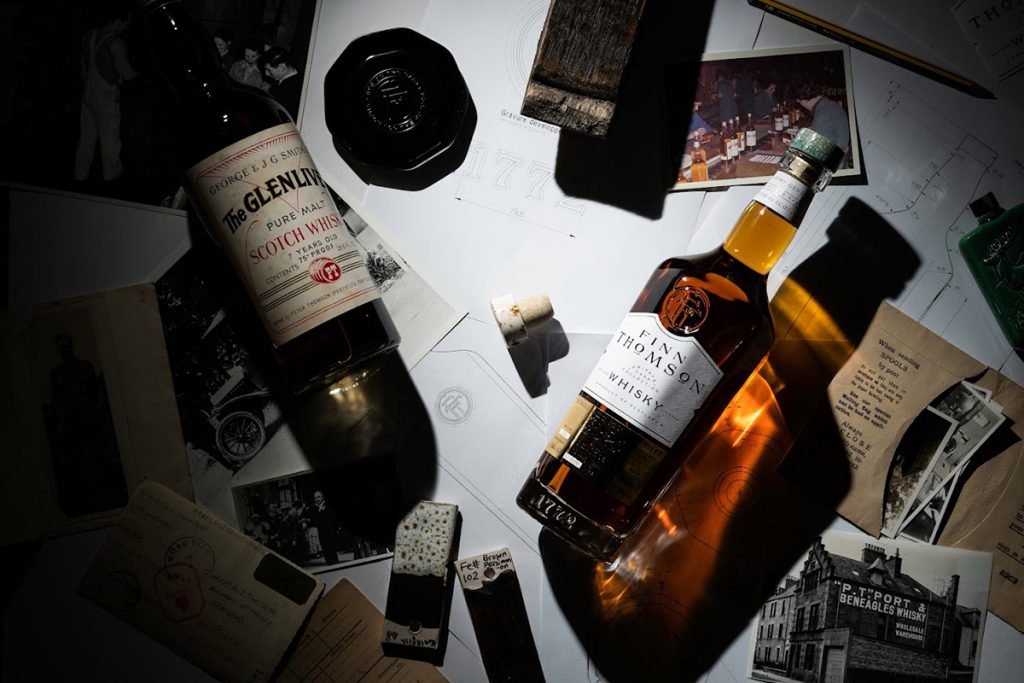 This a family with real history

Finn’s foray into the family business

It’s something of an untold story these days, however, and the revival of it forms a major pillar of the Finn Thomson whisky brand identity. It was a legacy that faded as many did with international cooperations snapping up family brands, in this case when Beneagles was sold in 1983  to the Stakis organisation. The Thomsons always knew who they were, however, even if the whisky world momentarily forgot, and Finn grew up very aware that his family had a reputation, connections, and a treasure trove of stock.

He always wanted to enter the family business. After university, he worked for Morrison & Mackay where he learnt how to trade on family heritage, then Copper Dog, a Diageo-backed project that prioritises cocktails and modern drinkers, where he understood the value of marketing. Some education under his wing and his own connections made, he decided to take the plunge and make his own brand right before the pandemic began.

Of course, it helps when your grandad was the former managing director of Peter Thomson’s Ltd. While Michael Thomson might have sold up in ‘83, he oversaw a vast and valuable stock, stowing away highly sought-after single malts and grains while maintaining close relationships with distillers all over Scotland. 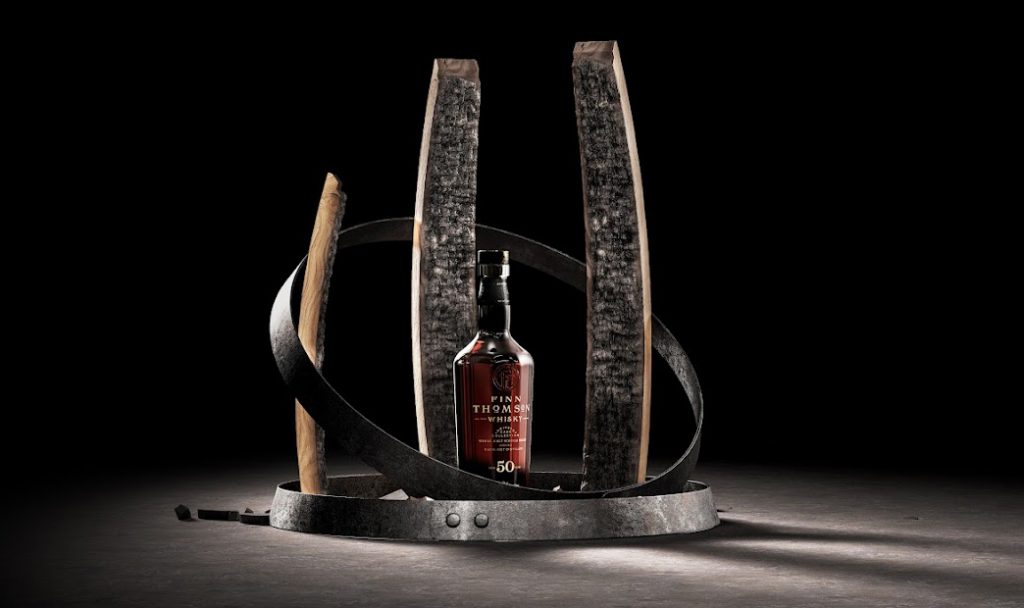 This enabled Finn to establish a range with three component parts. There’s the Core, the Rare, and the Crown series, which increase in prestige and price. All the packaging is designed to evoke uncasking, while the bottles are nine-sided nonagons; a side for each chapter in the Thomson whisky story.

There are eight single cask whiskies launching initially, including a boisterously fruity and nutty 9-year-old Blair Athol that was paired with fruit and nut chocolate and water from the loch, and a bonkers red wine cask-finished 12-year-old Inchgower that divided the room and didn’t know what it wanted to be but drank, at least in my case (I had a second dram, that’s as good a review as you can get basically). Personal highlights from the core range, however, were a PX-matured 14-year-old Mannochmore that would you make weep when you realise how rare it is to see this whisky as a single malt, and a 13-year-old Caol Ila that reminds you why everybody buys Coal Ila, and the answer isn’t simply volume.

In the Rare range, there was a tropical treat of a Dufftown at 34-years-old, as well as a succulent pear drop of a 32-year-old Auchentoshan. But a chocolatey, rich, glossy single cask 34-year-old single grain from North British stole the show with its array of toasted nuts, caramel shortbread, orange and ginger. Standing grand on its own in the Crown series, was a Glenlivet 50 Year Old, bottled at 49.8% ABV after spending its long life in a first-fill sherry hogshead. Its colour was so dark it looked like Coca-Cola, while the profile began at sherry bomb and developed into sherry fallout, with vibrant dried and tropical fruit making way for dense ancient flavours of rancio, old oak, and caramel all wrapped in tobacco leaves. It’s a statement of a dram, one that demonstrates Finn is here to make a mark. 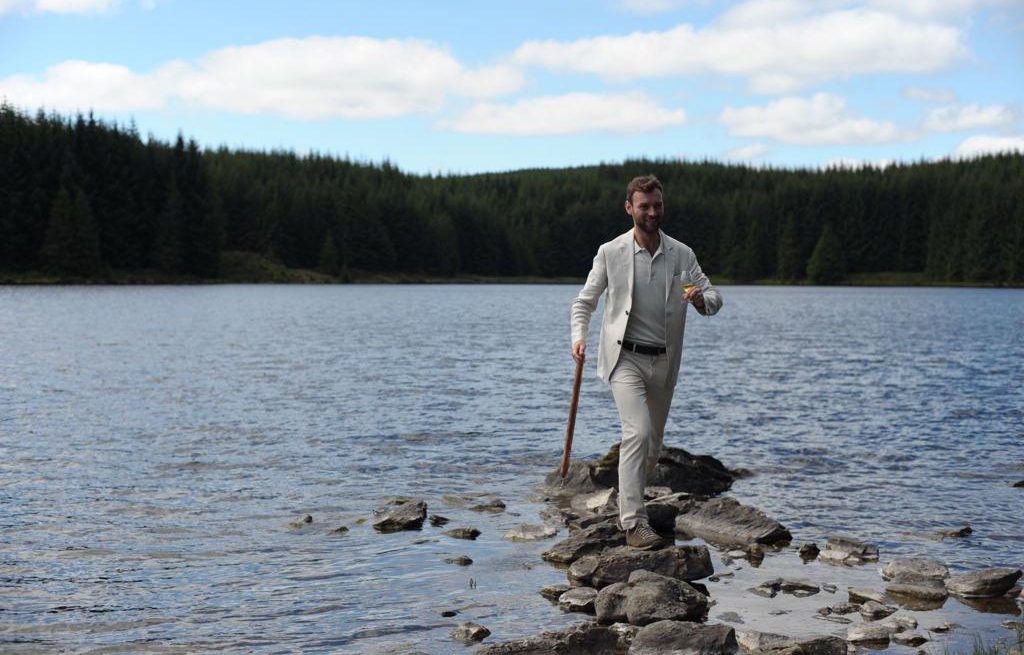 Where can this brand go? The sky is the limit

He clearly loves his craft. He spoke yesterday of wanting to raise the profile of the bottler’s art, and in some of the press materials, he’s referred to as the ‘master bottler’, with the bumf reasoning that he’s “responsible for calling the moment when a whisky’s flavours are at their finest; quirks and eccentricities at their most beguiling. Wood, water, and weather have had their say. The only guides that count now are taste, scent, and intuition”.

Whisky loves throwing the term master around with liberal abandon, but I did find it interesting to pause and consider the role of the bottler. We’re doing a better job of appreciating that creating whisky is not the only art, acknowledging the craft of the blender. But the bottler has a crucial and difficult role too, showcasing spirit that would otherwise have little route to market while ensuring they maintain the relationship and reputation of the distillery they’re working with; and catering probably more than anyone to the demanding whisky fanatic. Master should be a term you earn, but the fact that you never hear it associated with bottling perhaps says something about how fail to appreciate this vital role.

What’s not for debate, in my mind, is that Finn Thomson whisky is going places. This is as close to a sure bet as you will get in whisky. We have a story that tells itself. A family that will tell it anyway, with love and thorough research. A collection that will grow but begins with a supply many would kill for. It won’t always be easy. Michael would often say the bottling business is “seven years fat, seven years lean.” But when you’ve helped shape the very story of Scotch itself, writing a new chapter is never going to seem that daunting.

The Finn Thomson whisky range will be at Master of Malt soon.

What does it take to become a bartender?