Smoke on the water: The BeauFort Spirit story

Henry Jeffreys
No Comments on Smoke on the water: The BeauFort Spirit story

Today we delve into the links between history, perfume and booze with Leo Crabtree, the force behind the BeauFort range of spirits, and learn that it’s not easy to get the taste of real smoke into gin.

Leo Crabtree has had some interesting jobs before launching his own drinks company BeauFort Spirits last year. There was the business selling moustache wax during the great moustache boom of the 00s, then there’s his perfumery that’s still going strong, oh and he also plays drums for a little-known beat combo called the Prodigy. It makes a change from many new spirits brands where the story starts with: made a packet in the city and built a state of the art distillery.

It began with a moustache

The BeauFort range consists of the navy strength Fifty-Seven Smoked Gin and Three Tides Smoked Rum. In a roundabout way it was moustache wax that led to these spirits. He explains: “I had a big moustache and so this was back in the hipster days when I was living in London. I was stuck for moustache wax and the products you find are these crappy little tins that are always quite boring. So I started making my own in my kitchen in London. Then I needed some fragrance for it so I just started mucking about with essential oils.” 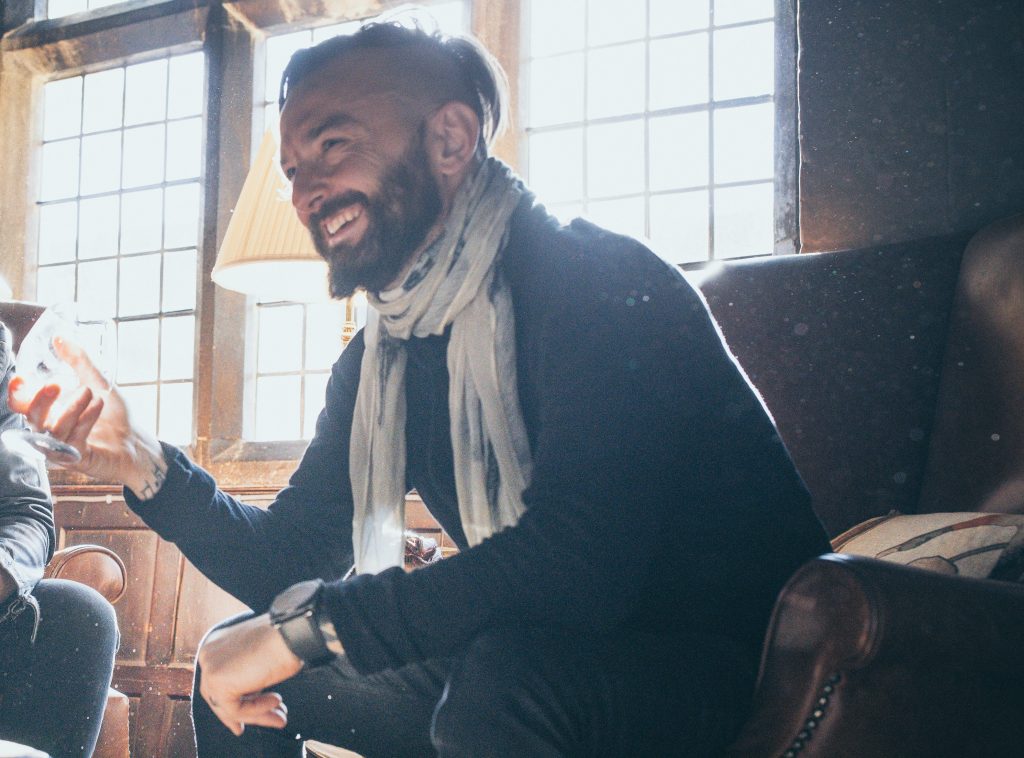 As you can see, Leo Crabtree has moved on from his moustache days

This kicked off his interest in perfume. Crabtree says: “I looked at what was in the marketplace and I thought ‘this is all quite safe and pretty dull’ and that we could do something a bit different. So we did.” This led to the creation of BeauFort Perfumes in 2015

The name comes from the Beaufort scale in wind: “I was looking for a name that conjured up a lot of associations with a nautical past but also this idea of vacillations in strength. The wind is obviously always moving in terms of its power. That was quite a good idea, I thought, for a fragrance name: something that is invisible but powerful.”

Crabtree is a history obsessive particularly about the Georgian era, the most dynamic and colourful time in British history. He collects Hogarth prints and other Georgiana and that interest in history informs everything he does.

From perfume to gin

They might seem very separate but historically the worlds of perfume and gin were linked. Making gin is a lot like making perfume, it’s about capturing flavours in alcohol. As Crabtree explains: “Distillation of essential oils is something that has been happening in perfume for millennia. Some of the early proto-wearable fragrances were drinks. They were distilled. There’s this one called ‘aqua mirabilis’ which was like an early eau de cologne, but it was basically gin!”

Initially, however, Crabtree wasn’t planning to make booze. He says: “The project began as an attempt to make a fragrance that was based around gin. The more I worked on that aspect the more interesting it became to do it the other way round. To make a gin that was based around fragrance ideas. And this weird discovery that the word ‘perfume’ is actually derived from the Latin, it means ‘through smoke’ – ‘per fumum’.” 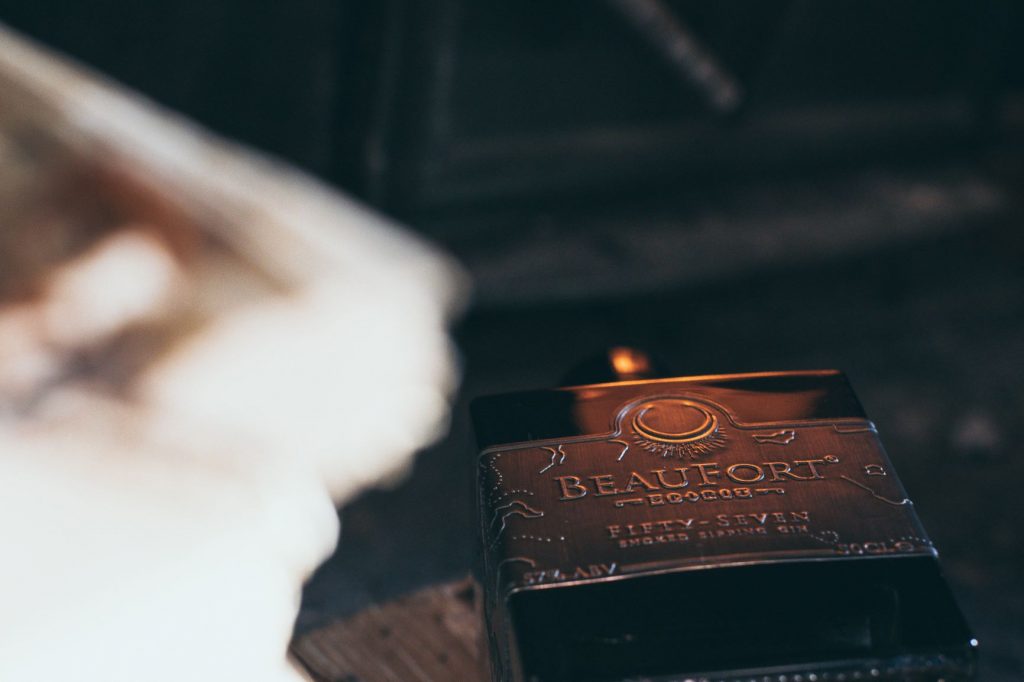 The idea for a smoked gin was born, but how to turn it into reality? By now living in the Cotswolds, Crabtree turned to help from Sion Edwards who he describes as “my recipe master”. At the time Edwards worked for Langley in the West Midlands; Crabtree was captivated by the company: “It’s not a show distillery, there’s nothing shiny about it,” he said, “it’s like walking into Isambard Kingdom Brunel’s workshop.” He worked with Edwards, Natalie Wallis and Rob Dorsett from Langley on the flavour profile that includes Szechuan pepper and liquorice.

Smoke in the water

Then the challenge was to get the smoke in: “We did the first trial with oak and hickory chips that had been used so they had already been burnt – which didn’t really work. It didn’t bring the aroma, it didn’t bring the taste”, he says. “You could use liquid smoke but obviously part of this is to keep it as natural as possible. So we ended up going to a smokery in Wales and they produced us a water which was like a concentrated smoked water and we used that to cut the liquid.”

Edwards left Langley in 2018 and moved to Union Distillers in Market Harborough, and Crabtree went with him. So for the production process: “Langley distills the gin base. We add smoke and fun at Union” as Crabtree put it.

There is also a smoked botanical rum called Three Tides, which is also created at Union. Crabtree explained a little about the flavours used: “We have gorse, elderflower, cacao and oats.” The first two are collected from Edwards’ farm in Wales. “The rum was originally Guyanese from Demerara,” Crabtree told us but now they use blend. It’s heavy on the funky Jamaica pot still with some aged Dominican and some young Bajan rum. 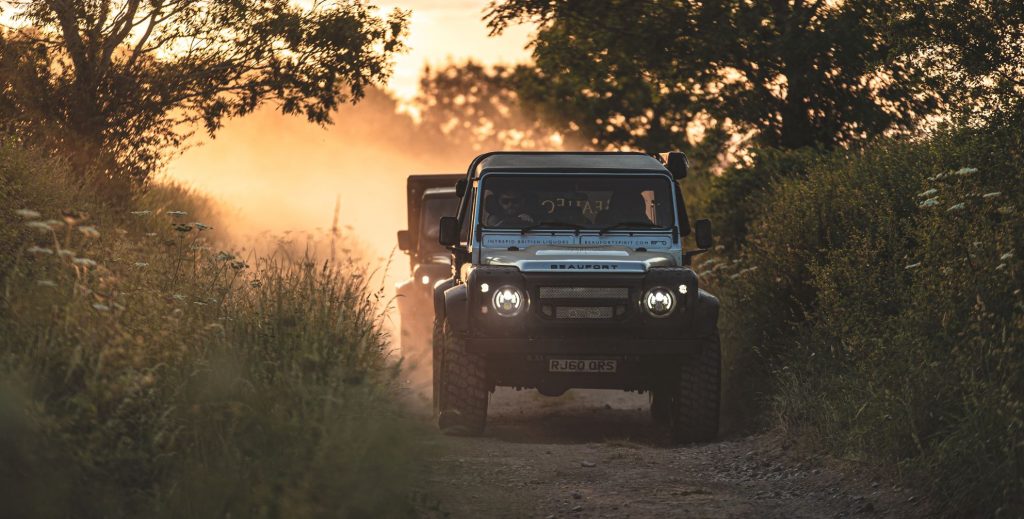 What a time to launch a brand

“When the news hit about COVID I was actually on the M6 headed north to a gin show in Glasgow. And I had a call from a friend and he said ‘I don’t think it is a good idea’ and I was like ‘I don’t think it is either!’ so we just turned around and came back. And that was going to be the first event in a series of about 40 different shows we were going to do last year, which obviously just got canned overnight. We didn’t ever really get around to launching officially,” Crabtree said.

He had planned to take his products on the road, “I’d just bought these bloody Land Rovers that we were going to be using for these shows!” he says. Instead, apart from a couple of events over the summer, it’s all been online. He started a brand website and “we haven’t seen a fall off of sales because we didn’t have them in the first place,” he jokes. COVID has also put his music career on hold.

Sales were helped by BeauFort 57 Smoked Gin winning a Gold Outstanding at the IWSC in 2020, scoring 98 points out of 100. There’s no doubt it’s a cracking drop, a real gin for all seasons. The punchy smoky juniper led taste makes it brilliant in a G&T cutting through even the sweetest of tonic waters. It also makes a fearsome Negoni and Martini. Crabtee recommends a Gimlet with a few drops of gunpowder tea or a Martinez.

However you drink it, there’s that smokiness melding with the spice and juniper. Crabtree describes it as very different to an Islay whisky smoke, it’s woody rather than medicinal. And it’s so evocative: “To me, it’s historical, somehow, and you can’t really put a finger on why. Maybe it’s like going to Jorvik [famously smelly Viking museum in York] or something when I was a kid. There’s something really primal about the smoke, it’s elemental but also it smells like the past, because everything was smokey back in the past!”

The BeauFort range is available from Master of Malt.