Henry Jeffreys
No Comments on Cocktail of the Week: The Martinez

It’s not easy being a Martinez, watching your child, Martini, become the most famous drink in the world while you lay forgotten about in dusty old cocktail books. So this week, we’re resurrecting this classic with a special oak-aged gin from Martin Miller’s.

Before anybody had thought to put the words ‘craft’ and ‘gin’ together, there was Martin Miller’s Gin. It was launched in 1999, that’s 10 years BS (Before Sipsmith), by Martin Miller of Miller’s Antiques guide fame. Craft gin years work rather like dog years, making Martin Miller’s 70 years old! It’s distilled at the Langley Distillery in the West Midlands before being shipped to Iceland where it’s blended with spring water. This makes it sound a bit gimmicky but Martin Miller’s quickly established itself as a favourite among bartenders and drinks writers.

Martin Miller himself died in 2013 but the company goes from strength to strength. It produces a range of oak-aged gin called 9 Moons after the number of months the spirit is aged. The latest version has just been launched, called Solera Reserve – it uses French oak barrels and a solera process to ensure consistency. Some oak-aged gins can rather whack you around the head with oakiness but this is quite subtle, giving a creaminess, roundness and spice without overpowering the botanicals. 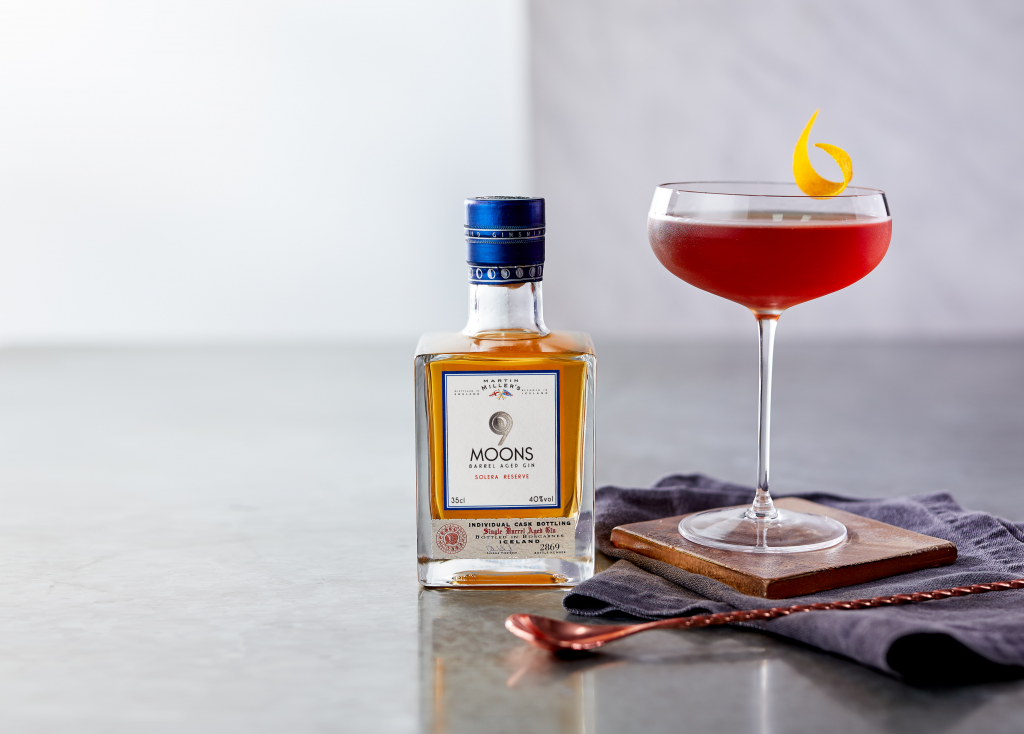 The company recommends serving it in a Martinez. This 19th century classic is often thought of as the forerunner of the Martini. David Embury in The Fine Art of Mixing Drinks refers to the Martinez as “the original Martini.” The cocktail itself is probably named after a town in California called Martinez, the inhabitants of the town certainly think so as there’s a plaque saying as much in the town square. It’s essentially a Manhattan made with gin instead of rye or bourbon. An early recipe in O. Byron’s The Modern Bartender from 1884 specifies using Dutch gin which would have been oak-aged so this version from Martin Miller is a nod to the original Martinez, though the Dutch gin would have also been sweet. Other original versions call for another sweet gin, Old Tom.

For a long time, the Martinez lived in the shadow of its more famous off-spring. Ask for one and you might be given a blank look, but in recent years there’s been a mini-revival, helped by the return of sweeter styles of gin and the availability of exciting new vermouths. The Martinez is a very broad church running the gamut from very sweet, made with Old Tom gin and a high percentage of Italian vermouth, to almost Martini levels of dryness. Some versions call for a rinse of absinthe which certainly makes it distinctive. This one is at the drier end but still is very much a sweet cocktail as it uses Italian vermouth and Maraschino liqueur. The creaminess and spice of the oak-ageing takes this into Manhattan territory. One could use it as a gateway cocktail to tempt your gin-loving friend into brown spirits.

Anyway, here’s the Martinez. We hope you like it.

Stir all the ingredients in a shaker with lots of ice for a minute or so. Strain into a chilled coupe or Martini glass and garnish with a piece of lemon peel.

Master of Malt @MasterOfMalt
26 minutes ago
On The Nightcap this week: @johnniewalker_ gives away 270,000 drinks, @RosebankWhisky launches its last old release before the distillery reopens, and the cheapest pint in the UK is revealed.