Cognac, Armagnac, Calvados… French spirits don’t always get the nod of approval when it comes to the cool kids. But Le Syndicat bar in Paris is on a mission to change that

When you hear the word ‘Armagnac’ what scene does it conjure: lines of vines backdropped by a crumbling castle, or an unmarked door in the middle of a wall of freshly-plastered gig posters? Before visiting the award-winning Le Syndicat bar in Paris’ Saint Denis commune, for me, it certainly wasn’t the latter. Having seen how head bartender Thibault Massina and his team use French spirits in the bar’s avant-garde cocktails, however, it’s clear that they’re on a mission to make the likes of Armagnac, Cognac and Calvados the spirits of choice for the cool young things – and me – who frequent it – the website’s tagline is ‘when grandpa’s spirits go gangsta’.

“The original idea was very simple,” explains co-founder Romain Le Mouellic of the bar’s beginnings in 2014. “We were going to parties everywhere with friends in France and drinking everything but French spirits. We found it strange… we knew we had very good wines but we didn’t seem to know that we also had very good spirits.”

Eight years later and Le Syndicat is a Parisian powerhouse with more than a bar to its name. Alongside its creative agency, a magazine and another bar – La Commune – it has also launched hard selzters and other ready-to-drinks (RTDs) in recent years and months. So, why and how do they do it? 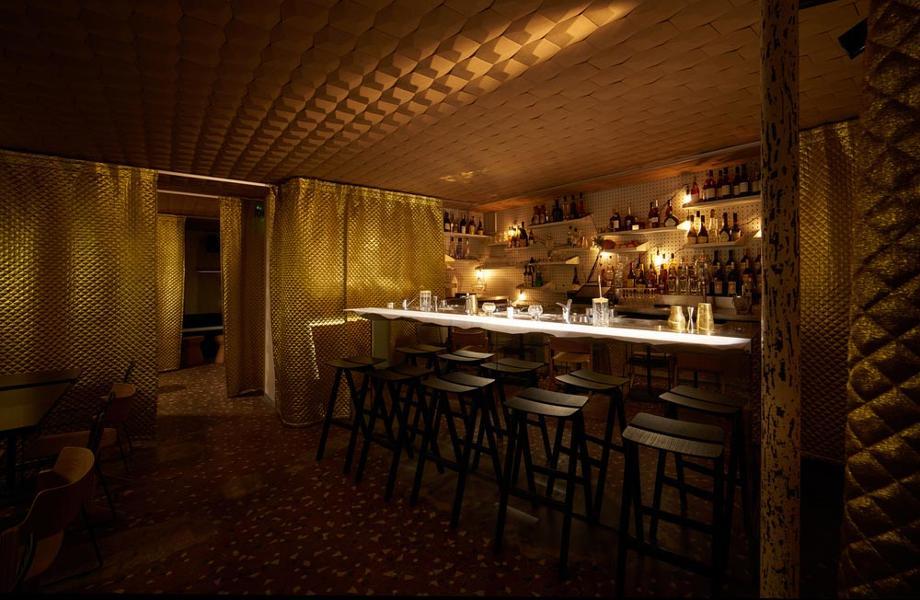 When it comes to the French drinking French, it isn’t the easiest sell. Part of the problem is that – perhaps unlike the British – local people aren’t as excited about local products, something Massina hones in on. “I love the French but the French mindset is quite weird sometimes. We’re proud of our products but we aren’t the main consumers – there is a natural attraction towards more exotic products.”

So, Massina and his team take traditional, local products and turn them into drinks that feel anything but. Combinations likes coriander and crème de cacao, rhum and Champagne, and Calvados and rose all feature on Le Syndicat’s cocktail menu, alongside aperitifs like Sassy Cidre, Henri Bardouin Pastis and, of course, absinthe. Massina talks me through two of its biggest hitters, Lil Wine (rancio sec, Pineau des Charentes, dry vermouth and Feuille de figuier) and Get Your Leaf On (based on a combination of parsley, Cognac and whisky).

“With Lil Wine we have four different seasons and work with different products every season, but work with the same structure,” he explains. They mix a litre of rancio sec (an oxidised wine from the Roussillon) with 500ml of the Pineau des Charentes (a combination of Cognac eau-de-vie with grape juice) and 500ml of Dolin vermouth before adding water and infusing with those aforementioned seasonal ingredients – for summer, it’s fig leaf. The Get Your Leaf On, meanwhile, is a twist on an Old Fashioned and has the team infusing Cognac and whisky with orange tree leaves, a touch of syrup and a little bit of verjus.

Getting brands like these on the back bar isn’t easy, as Le Mouellic explains. “You are talking to houses that are hundreds of years old that have specific ideas of what beauty and quality is. Very often they look at cocktails, bartenders and an underground approach not always in a positive way.” The tides are, however, changing for two reasons: “Globally, they face difficulties and they see things are changing and are beginning to understand that innovation is something necessary. Also, because of our brand and the image we have built, when we do something strange it is always about quality and beauty so they look at us with more confidence and let us play with their product.” 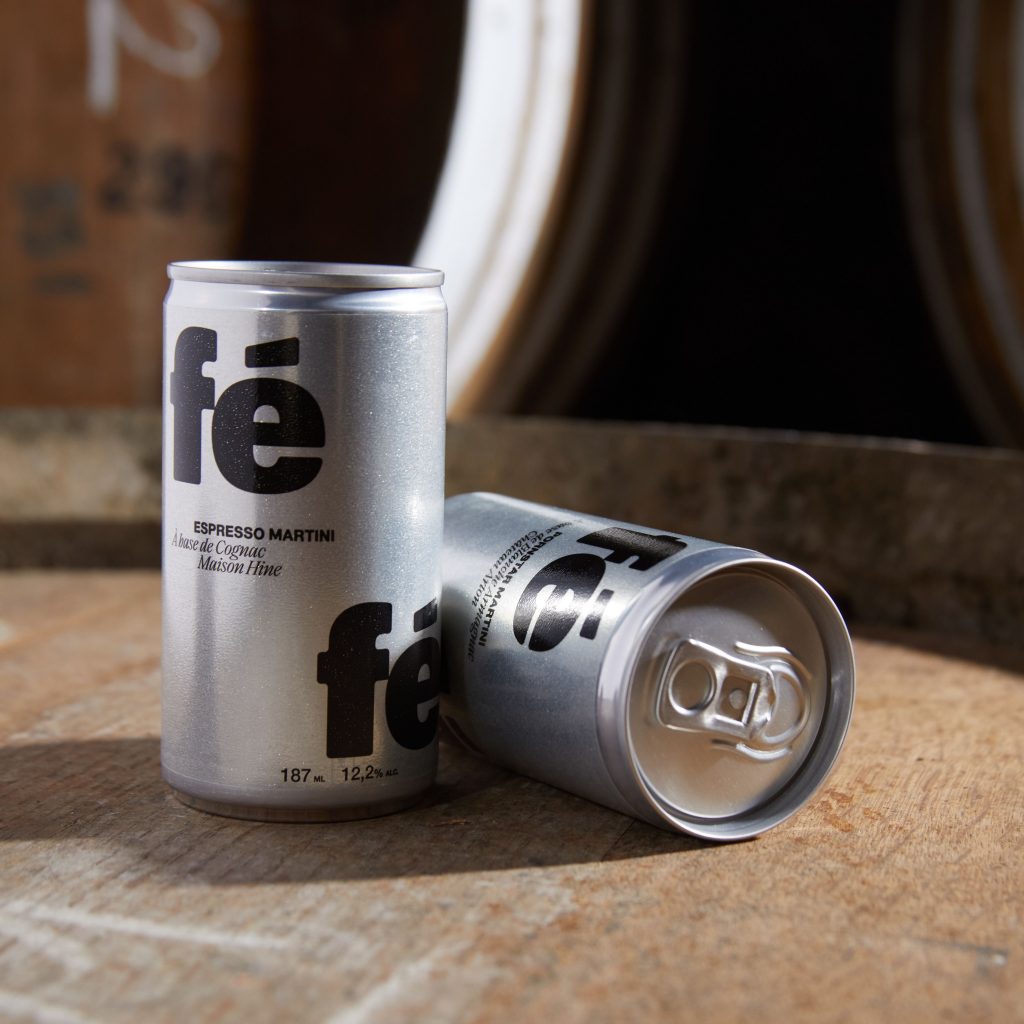 Perhaps the biggest coup for the brand though is getting these traditional spirits into very untraditional drink formats in the form of their brand new Féfé Fine à l’Eau RTD cans, a progression from their hugely successful hard seltzers which they launched in 2020 and fronted by French rapper SCH. “We were the first bar in France to have hard seltzers on the menu,” says Le Mouellic. It was very new so we explored a little and did some trials – it was a huge success so we decided to grow stronger in 2021… we put our cocktails in cans, signed one of the big stores in France and now people are looking at it more seriously.”

For Massina, the Féfé portfolio is an opportunity to give guests a taste of Le Syndicat outside of its four walls – much like the wine industry.  “My first job was as a wine guide… With a cocktail bar I liked the same idea of giving people my knowledge but at the same time I was a little frustrated that you can’t make a drink like a bottle of wine where you can buy it in a shop… Féfé and RTDs are such an opportunity for us because you can put the flavour in the can and drink it far from the bar.”

It’s also an opportunity for collaborations with other bars – recently, the teams at London’s new Silverleaf bar (from the team behind Milroy’s of Soho) and Mexico’s award-winning Hanky Panky released collaboration cans with Le Syndicat, sponsored by Remy Martin. 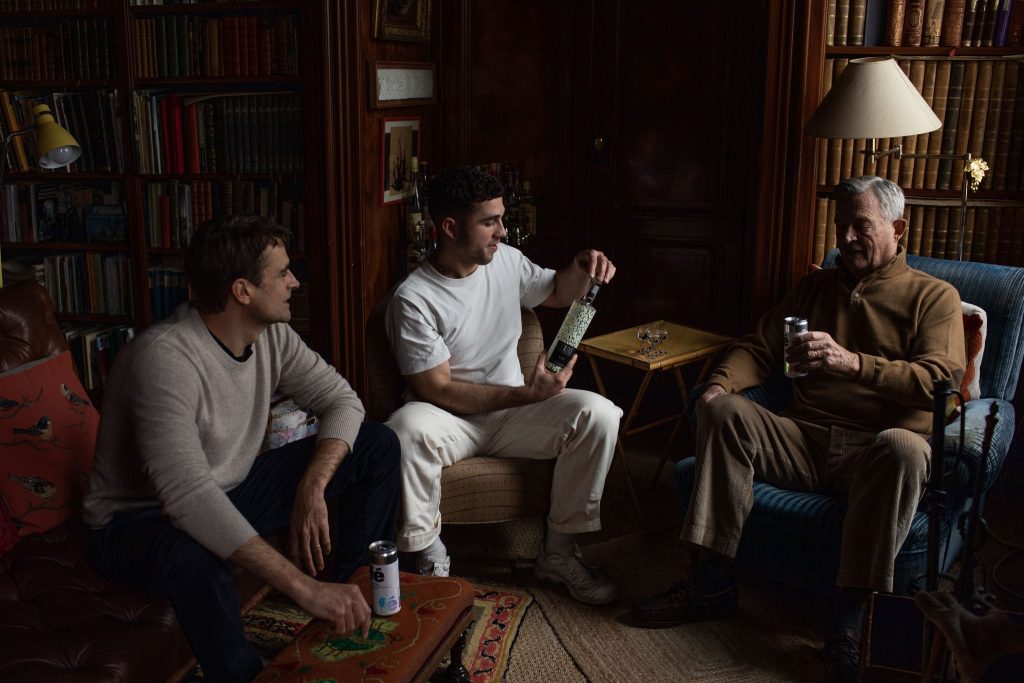 “I don’t know boys, I don’t think hard seltzers are going to take off in Europe”

The ambitions of Le Syndicat’s team aren’t waning either. “Things are quite clear in terms of vision.” Says Le Mouellic confidently. “We are building a domain, the first in our industry. You have the cellar master (head bartender), terroir (our neighbourhood), the art (mixology)… all of our work in the coming years will be to express the Domaine de Synidcat. It’s been eight years now that we’ve been working on this, so the depth of the concept is very important. We have the tools at our disposal –  different agencies, a small magazine –  and we use all of our tools to push this, but at the core is the quality of our bars and I think next development will be to go even further with quality of our cocktails.”

They’re also on a mission to get the likes of Armagnac and Cognac back in planes and on trains through their RTDs, continuing their work of making French spirits cool again. If the last eight years are anything to go by, I don’t doubt they’ll do it.