Have you ever gone to buy some whiskey and ended up purchasing the whole distillery? That’s what happened to the owners of Stork Club, who have since helped the brand cement its status as one of the most engaging brands in the German whisky boom.

The original founder of Stork Club was a doctor who came to Bradenburg after the wall came down and started a gastropub, where he taught himself to brew and distil. In 2004 he started to make whisky, as well as more than 60 other creations from fruit brandies to rum. By 2015, he was 65 years old and was looking to sell up. When Steffen Lohr, Sebastian Brack, and Bastian Heuser took a road trip from Berlin looking to buy a cask, they weren’t aware of this fact. “We came back with the whole distillery,” Heuser says.

While it wasn’t the trio’s plan to own a distillery, the three of them were all established in the drinks industry. Heuser was a former bartender and co-founder of Bar Convent Berlin. Lohr was also a bartender who worked for Bacardi as a brand ambassador, while Brack is the founder of Belsazar Vermouth and Thomas Henry Tonic water. They’re savvy operators with connections, even if producing their own whisky only happened by chance, as Heuser puts it. He says the trio sampled over 200 casks from original stock and right away it was clear what direction they would go in: rye whisky.

The Stork Club distillery is in a region of Brandenburg south of Berlin, surrounded by a nature reserve in rye country. It’s one of the biggest growing regions for the grain in Europe, with the Russell family behind Wild Turkey even admitting that they source its rye from here. As bartenders, the new owners were all too aware of what a hot property rye whisky was, and what a point of difference it was in Germany. Across the country’s vast network of distilleries, most of the whisky made is single malt, lots of it using imported barley. “When we started we were one of six or seven distilleries in all of Europe that primarily produced rye whisky,” Heuser recalls. 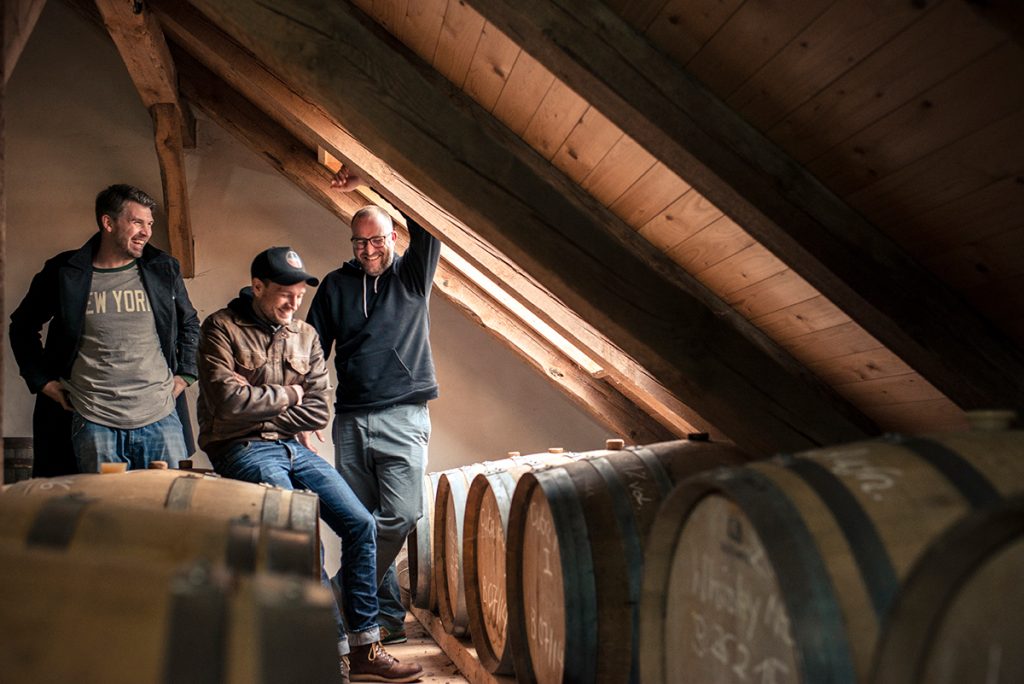 The new owners built up the distillery on a site that was established first back in 2008. The name, if you’re wondering, refers to the bird which is prominent in the local Spreewald Reserve, and the local village becomes home to more than 200 pairs of storks every year. As bartenders, they were also aware of the association people would also make to the legendary New York nightclub that booted out Humphrey Bogart of the same name, so the brand is currently exploring a name adjustment in the US where the club has a trademark.

Back to the process of making German rye whisky, which begins, as you might imagine, with rye. Previously the mash was bought-in to distil. Now Stork Club starts from scratch with rye sourced from surrounding fields via an agricultural cooperative of regional farmers. The grain is milled on-site in a hammer mill made to specification before it’s blended with hot water (the good pure stuff sourced from the nature reserve) to create a mash, which is then pumped without any further filtration (rye’s a sticky grain) into stainless steel fermentation tanks. The malted rye is hit with two selected ale yeast strains, one fruity Belgian style and another malty, richer English variety. This lasts for four-to-five days, before the resulting 8-10% ABV liquid is pumped into small 650l and 1,000l capacity copper hybrid stills. This gives the distillers a dual benefit of first distilling their whisky in a pot before the spirit is funnelled into a small column still with five copper plates and is distilled a second time.

Stork Club actually creates new makes, not just one spirit, consisting of two individual mash bills. The first is made to be bold, using 100% unmalted rye that leads to a spirit full of fruit and spice. The other is mellower, made with 100% rye malt to create a sweet, malty, chocolatey new make. “Our inspiration behind having two different new makes was to give us a diverse profile. Right now we keep them separate, but in the future, we are free to also blend them, so have even more choice in terms of flavour,” says Heuser. 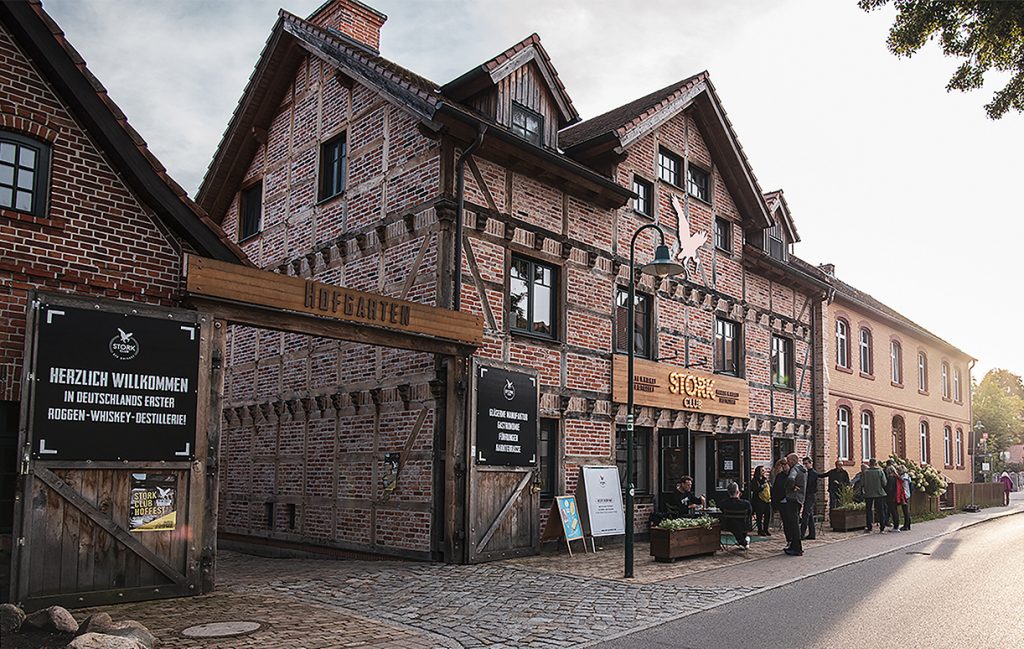 The Stork Club Distillery, which we highly recommend seeing

German from start to finish

The new makes are filled into barrels at 60% ABV, with a combination of first-fill American oak and German oak casks (weighing much more to the former) being favoured. These are charred and toasted to either medium to heavy in style. German oak was always desired to be part of the equation, but while it’s complex and brings a lot of richness, it lacked sweetness so the owners felt American oak was needed too. The distillery has warehouses across its site, varying in size and location, with a small attic warehouse providing warmer conditions compared to the ground stores.

As you might expect, the Brandenburg climate has an effect on maturation. “We are in a warmer region and in the summertime, so we get up to 30-35 degrees celsius, which means it’s up to 25-26 degrees in the warehouse,” Heuser explains. “In the winters, it can get below zero. The warehouses have an open roof, meaning lots of air turnover. If you compare it to Scotland there is a big temperature difference over the year, and that leads to higher impact”.

A variety of sherry and German red wine barrels are also in the cask inventory but saved for special releases, while Stork also experimented with rye beer barrels in collaboration with a local brewery. Other innovations include its Rosé Rye Aperitif, an unconventional creation made by combining fruity Pinot Noir rosé from Baden with its rye whiskey. Most radical of all was a limited-edition spirit called Cereal Killer, which infused a rye whisky with six different cereals including Fruit Loops, Honey Pops, Corn Pops. “We’ve had ideas so cool that no one has ever really thought about making,” Heuser says. “They’re totally different takes, and that’s how we always want to be, we don’t like boundaries or to be too conservative”. 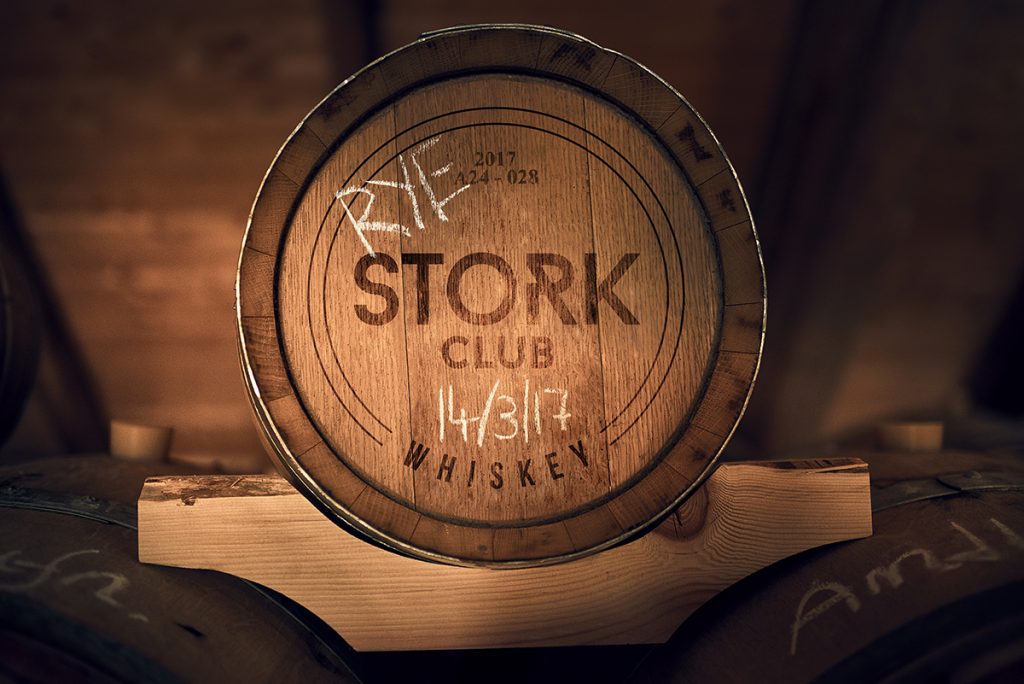 German oak is included in the Stork Club wood programme

Flying the flag for German whisky

Stork Club’s process has put the distillery at the forefront of the German whisky boom. While the country is known for schnapps, herbal bitters, some of the world’s best beers, and wine regions like Mosel, Rheingau and the Ahr, whisky isn’t a drink people immediately associate with Germany. The spirit has been popular for decades and it actually has a lot of history with it, however, with the Jim Beam family, George Dickel, and the Stitzel-Weller distillery all having German roots. Even the American bourbon trail was largely paved by immigrants from Bavaria and Baden-Württemberg. But German-made whisky is a relatively new phenomenon, only really taking place in earnest in the last twenty years.

Today, a handful of distilleries, such as Slyrs, (producer of the first modern single malt in 2002) Hammerschmiede, Ralf Hauer, Preußischer, St Killian, and Hardenberg, are at the forefront of the new German whisky scene with Stork Club. But with no strict legislation dictating what German whisky is, producers can easily source Scottish barley, use Scotch-style stills, and make something that’s more imitation than original creation. Stork Club is one of the few demonstrating there’s a different way. The process begins with German rye, everything is made and matured on-site, and there’s even some German oak in the maturation. It’s German from start to finish.

Of course, there’s still work still to be done. Around 40,000 visitors a year visit the Stork Club distillery because it’s in a tourist region. But Heuser says a lot of them still need the rye whisky category explained to them. “For us, it’s natural. We’ve been growing rye here for 500 years, why should we use anything else? But outside of America, it’s not been as common. So we have some education to do, but it’s great to see it begin to thrive elsewhere. We really want to see the whole rye whisky category grow, and it is. And it all tastes different”. 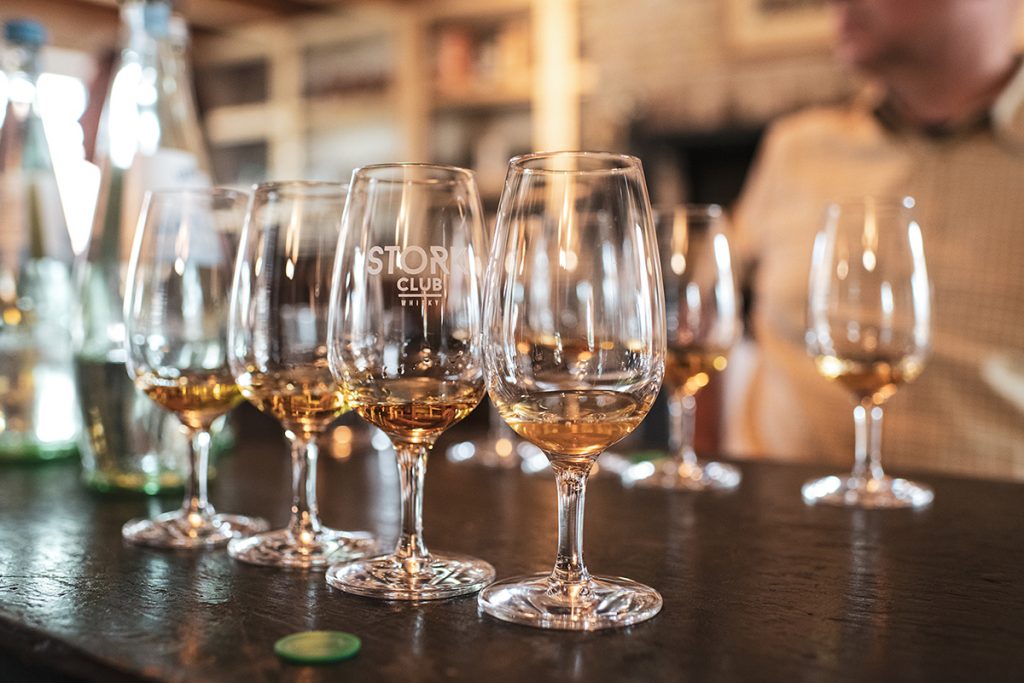 Get yourself a dram and see what the fuss is about

This brings us to what Stork Club tastes like. As you can imagine, the former bartenders were keen to make a whisky that’s approachable and can work in cocktails like a Manhattan, a Whisky Sour, or a Highball. The Straight Rye Whiskey is ideal for this, especially the latter in my opinion where its spicy, warming, and fruity qualities are lifted and engaged by the minerality of soda water. Across its core range, there’s a definite house style, with notes of caramel chocolate, espresso, vanilla, marmalade, and winter spice standing out, which are elevated by the bold, unctuous and oily texture of the full proof rye (at 55% ABV).

The difference between the old Stork Club whisky and the one you can buy today that’s made by controlling the whole process is night and day. The fermentation and yeast strain brings greater complexity and more fruit, while those fresh casks have a big impact. A little more time spent to mellow some of the harsher elements they bring wouldn’t hurt, but overall Stork Club is shaping up to be an impressive outfit. And it’s all thanks to the kind of approach that can help German whisky stand out in an ever-increasing crowd.

Master of Malt @MasterOfMalt
38 minutes ago
The hauntingly beautiful live performance from @BenLomondGin Scottish Gin will have you mesmerised. Blackcurrants and rowan berries are a fine duo, backed up with floral flourishes and from famed performers such as Rose Petal, and Szechuan Pepper.

Master of Malt @MasterOfMalt
1 day ago
George Grant steps back from Glenfarclas, the stars of It’s Always Sunny in Philadelphia make a whiskey, and ingredients such as invasive crabs and hot dog water are being used in booze production. It’s all true, and it’s all in The Nightcap!

Master of Malt @MasterOfMalt
1 day ago
. @The_Macallan has launched a trio of limited-edition single malt whiskies as part of the brand’s M Collection.

Master of Malt tastes.... The Lakes Whiskymaker's Reserve No.5