Millie Milliken
No Comments on Going bananas: Why banana drinks are everywhere

From infusions to macerations, esters and cocktails, banana-flavoured drinks seem to be everywhere. Millie Milliken speaks to the makers and shakers who are going bananas for bananas.

Hands up who made banana bread as the Covid-19 pandemic took hold. Thought so. Yes, the nation went banana mad over lockdown. My childhood love of bananas in the form of milkshakes, frozen and dipped in chocolate and in sandwiches with bacon has continued unflinchingly into adulthood. Over the last year, I’ve been happily falling over banana-forward drinks.

“In recent times, banana is a flavour that has been forgotten,” says Giulia Cuccurullo, the recently appointed head bartender at the award-winning Artesian bar at the Langham Hotel. The team reopened with a banana bread-inspired cocktail on its new Connections menu (more on that later). Banana’s current resurgence, however, is seeing not only bartenders playing with it as a flavour, but producers are injecting some of the yellow stuff into spirits too. 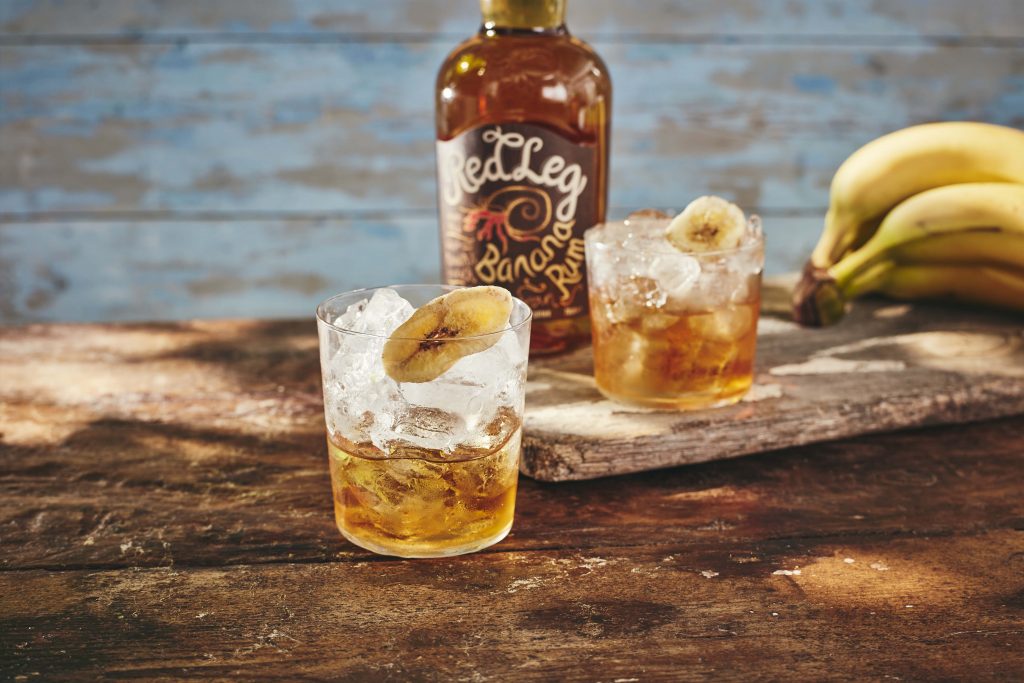 Perhaps the most popular spirit for the banana treatment is rum. Within the last year, two such rums have been launched: RedLeg Banana Rum and Grand Kadoo Carnival Banana Rum. Where RedLeg’s expression (based on the core rum which is distilled in the Caribbean, rested in oak barrels and infused with Jamaican ginger, vanilla and banana) smacks of pic n’ mix foam bananas, Grand Kadoo’s Bajan-hailing liquid brings more caramelised and banana fritter vibes.

My favourite on the market, though, is Discarded Banana Peel Rum – not just for the taste but also its sustainability credentials. “Like all of our Discarded Spirits Co. range, our Banana Peel Rum has two discarded ingredients,” brand ambassador Sam Trevethyen tells me.

First, is a Caribbean rum that was used to season a cask for a William Grant & Sons whisky. Instead of selling on this rum – or even destroying it – it becomes the base for the product.

Second is, of course, bananas – specially, you guessed it, the peels. “When flavour companies extract banana flavour, all they use is the fruit, leading to the peel being discarded,” he continues. “We get our banana peels from a flavour house in the Netherlands in the form of dried banana peel chips. We rehydrate and ferment them, to really boost that flavour, before steeping them in alcohol for two weeks to extract the flavour. After that, we blend the cask rum base and the banana peel extract together to create Discarded Banana Peel Rum. The result – liquid banana bread.” Clever stuff –  and the bottle is now 100% recyclable.

Other categories infusing bananas into their liquids include bartender favourite and award-winning Giffard Banane du Bresil, a liqueur made from the maceration of – mainly Brazilian – bananas and with the welcome addition of a soupçon of Cognac. The result? Ripe banana on the nose followed by a more buttery, roasted flavour profile and a touch of oak from the Cognac. A quick message about it on an industry Facebook group elicited responses including “the most glorious of all glorious liquids”; “it’s pretty damn special”; “it’s gorgeous stuff”, and a barrage of banana emojis.

There are also plenty of liquids that can impart the aromas and flavours of banana simply through production methods as opposed to using the fruit itself. One such spirit is The Glenlivet Caribbean Reserve, owner company Pernod Ricard’s first ever rum barrel-finished single malt, which it launched in September 2020.

During a tasting of the liquid at OurWhisky Festival, master distiller Alan Winchester attributed the banana notes in the liquid – which can be found in its new make spirit – to the use of the rum cask, bringing those specific notes to the fore where perhaps other cask types may not have done.

Another spirit that surprised me with its banana esters is Boatyard Distillery Vodka. Head distiller Orlaith Kelm uses selected Irish wheat which is fermented slowly and at low temperatures with no added enzymes which creates banana-like flavours. Think of the taste of a traditional German wheat beer, that’s an ester called isoamyl acetate (which occurs naturally in bananas). Kelm then accentuates this flavour using the still’s plates to create a seriously characterful – and banana-led, liquid.

Isoamyl acetate and other esters develop during the production process of various rums. Which is why you often get that distinct green banana note in rhum agricole, clairin, and some Jamaican rums. Have a sniff, next time you’re near a bottle of J Wray and Nephew Overproof Rum – banana city! 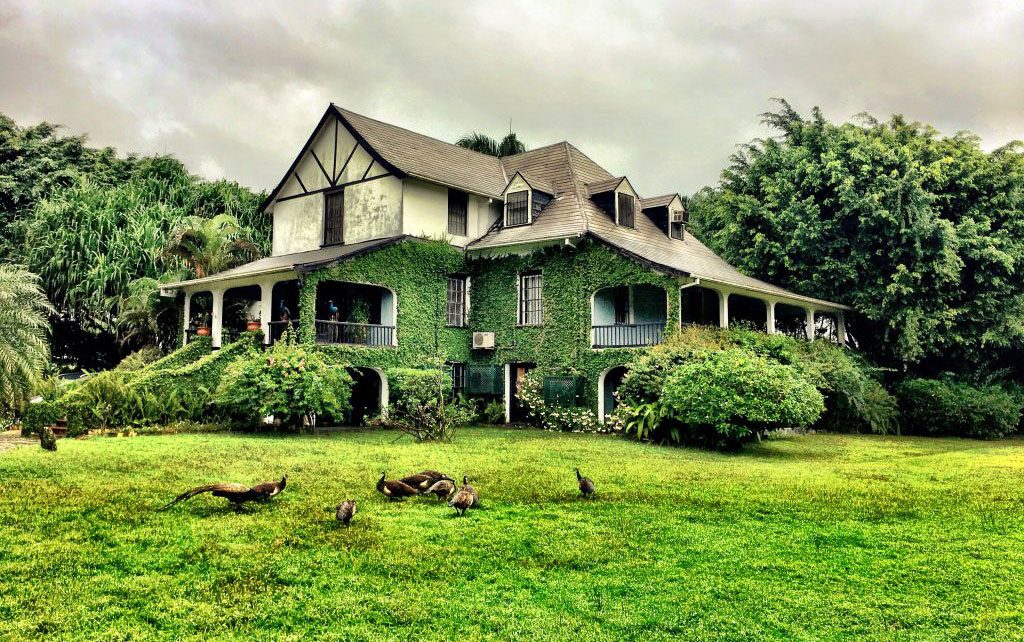 Bartenders are also turning out banana creations faster than bananas in pyjamas chase teddy bears. East London’s bar and pizza joint Nebula features a Banana Blaster (Jameson, banana and soda); bottled and canned cocktail brand Easy Social (from Nebula’s owner) has a bottled banana Manhattan as part of its product range; while a peanut butter and banana cocktail is in development over at Sexy Fish.

Ryan Chetiyawardana’s Lyaness launched with its Infinite Banana ingredient on the original menu. The team cured, slow roasted and blended banana in a solera system to get its complex and versatile banana creation.

When the Artesian bar emerged from the last lockdown, it reopened with a new menu called Connections, focused on the shared experiences of the nation during the last year. Split into five sections, it is in the Wellness & Mindfulness list that you’ll find Banana Bread 1933. “One of the things everyone was doing over lockdown was making banana bread, so we wanted to make a drink around that relaxing baking memory,” explains Cuccurullo.

The cocktail comprises Woodford Rye Whiskey, Oloroso sherry, Banana Monin, ground spice, cocoa butter, burnt toast and vanilla. Cuccurullo and the team have been playing with banana as an ingredient since even before the pandemic, doing trials with different spirits and using all parts of the banana, including the skin. “As a flavour, it is really easy to work with, plus it gives a more creamy mouthfeel. It’s a flavour you can recognise straight away in a drink but it is never overpowering.”

Trevethyen has seen Discarded Banana Peel used in a cacophony of cocktails too, from simple serves including ginger beer “that tastes of liquid Jamaican ginger cake with banoffee glaze”, to more traditional whisky serves, like Banana Old Fashioneds, Banana Manhattans and a twist of a Boulevardier, his personal favourite.

For Cuccurullo, banana’s resurgence in cocktails could be a source of comfort for drinkers. “It’s a flavour that reminds you of your childhood, it’s a security flavour, it’s nostalgic.”

Cocktail of the Week: The Blood Orange Margarita