Flavoured ‘whisky’: the next generation

Lauren Eads
2 Comments on Flavoured ‘whisky’: the next generation

With Jameson, Haig and Grant’s all releasing flavoured ‘whisky’, sorry spirit drinks, in the last couple of years, Lauren Eads takes a closer look at this often maligned category.

Back in the early 2010s, fierce debate erupted over the wisdom of flavoured ‘whiskies’. It was a divisive battleground. On one side you had largely American producers that had gone the whole hog and released all manner of whiskeys with added flavour, from honey and cinnamon to bacon and peanut butter, with great success. The more venerable Scotch industry wasn’t so enthusiastic, its character more robustly protected by the Scotch Whisky Association (SWA). Producers and aficionados looked on with intrigue at best, disdain at worst. A few Scotch whisky producers dabbled with flavoured drinks (which under SWA rules must be called a spirit drink) like J&B’s Urban Honey, Ballantine’s Brasil and Dewar’s Highlander Honey, but releases were restrained. 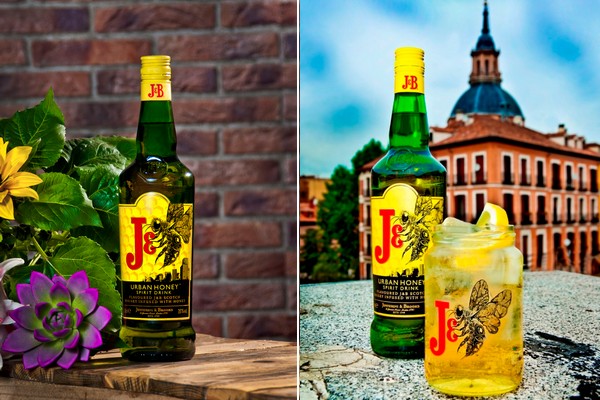 J&B Urban Honey: a drink ahead of its time?

Scotch whisky is now firmly in the spirit drinks business. But what changed? And has the condescension surrounding flavoured malts dissipated? Not exactly. “There is definitely a degree of snobbery around [flavoured] ‘Scotch’,” says Colin Hampden-White from Cask Trade. You might think as a member of the Worshipful Company of Distillers and a Keeper of the Quaich, he’d look down his nose at such things but far from it: “Fans seem to like to hold onto a hierarchy. By denouncing others they try to keep their hierarchy,” he said. “Whisky should be for everyone, and every whisky can be enjoyed by someone.”

Those that get annoyed by frivolous flavours are somewhat missing the point. Flavoured whiskies are about novelty, experimentation and, let’s face it, volume sales, which Scotch has lost out on to more innovative spirit categories. They are made for consumers seeking out something new, and that’s part of their appeal. “Flavoured whisky is only really frowned upon by enthusiasts who are already well on their whisky journey,” says Becky Paskin, from OurWhisky. “Flavoured whisky is a recruitment product designed for mixing in cocktails – it’s not designed as a sipper for the connoisseurs and collectors. So long as the flavours are natural, balanced and the drink isn’t overly sweet, there’s nothing wrong with flavoured whisky at all.”

I doubt those drinking flavoured whiskies much care for the opinions of enthusiasts anyway. And it tends to be a younger demographic, or those at the start of their whisky journey, driving their success. People who wouldn’t normally drink whisky are showing an interest through flavoured variants, reflective of a more “adventurous consumer who, during lockdowns, was more experiential with their choices,” says Dan Mettyear, IWSR analyst. Are these the whisky connoisseurs of the future? Maybe, but who cares as long as they are drinking the stuff? 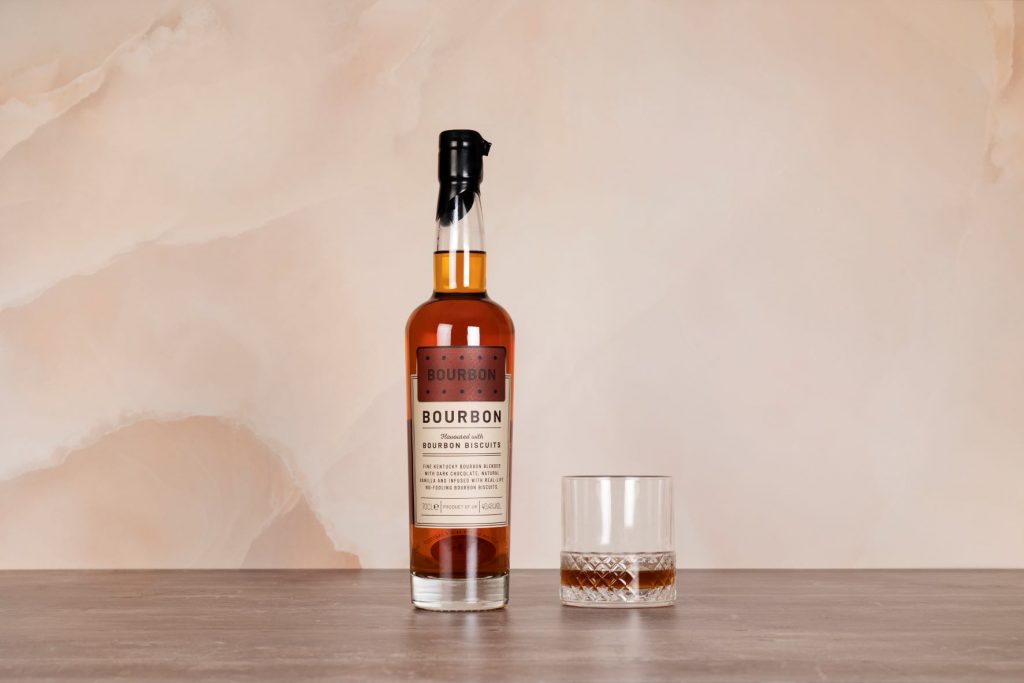 Made with real Bourbon biscuits

In the US, no surprise. Wild Turkey’s American Honey was first created and marketed as a liqueur by master distiller Jimmy Russell in 1976 and renamed in 2006. Canada’s Fireball Cinnamon Whisky launched in the mid-1980s, then in the US in 2001. Later came Jack Daniel’s Tennessee Honey (2011), Knob Creek’s Smoked Maple (2013), and Skrewball’s Peanut Butter (2018), to name a few. Craft producers are making flavoured bourbons too. Chicago’s FEW Spirits makes its Cold Cut Spirit by cutting its cask strength bourbon with cold brew coffee. There’s also the beautifully British Bourbon Bourbon (flavoured with real Bourbon biscuits) that’s been flying off the shelves at Master of Malt, according to a recent trends update.

Bourbon has a sweeter, bolder profile that can handle sweet flavours, plus the US palate is more familiar with flavoured spirits. “Just look at the flavoured vodka boom of the early 2010s when we saw every iteration imaginable from bacon to birthday cake,” notes Paskin. “American consumers also tend to have more of a preference for sweeter flavours than Europeans, making flavoured bourbon a popular choice.” Hampden-White also makes the point that bourbon doesn’t have the obvious flavour variations Scotch has, peated or sherried for example. “Flavouring bourbon gives variation, especially at the lower end of the market,” he said.

The same cannot be said of Scotch, which can be a lighter spirit. And any brand looking to develop a flavour should do so “with consideration for the whisky’s core character,” warns Paskin. “Flavours should be selected to complement the whisky, not overpower it, and as consumers are more health conscious than ever, sweetener should be on the restrained side.” Sweet Scotch spirit drinks do exist, and were among those first released, but the market is evolving beyond bourbon-esque mimicry with producers better tailoring their approach to flavoured variants.

It’s perhaps why a number of zestier variants have emerged from Scotch (and Irish) producers in the past year, including Haig Club’s Mediterranean Orange, Jameson’s Orange and Grant’s Summer Orange, shunning overt sweetness. English producer The Lakes Distillery released The One Orange Wine cask in 2020, finished in first-fill American oak casks seasoned with vino de naranja (wine made from oranges) from Andalusia. Jim Beam also released an orange-flavoured bourbon last year.

“Anecdotally there seems to be a trend toward light, lower-calorie and refreshing spritz drinks,” says Paskin. “The raft of new orange-flavoured whiskies, which are lighter and less sweet than their predecessors in the 2010s, play into this space really well.” Most producers also have an alternative occasion in mind. Grant’s wants consumers to enjoy its orange variant as an early evening aperitif served with soda or lemonade, turning the ‘after dinner Scotch’ mindset on its head. Haig has drawn on the clout of ambassador David Beckham to position its Haig Club Mediterranean as an “accessible” aperitif aimed unapologetically at recruiting non-whisky drinkers with its “fresh and juicy” marmalade flavours. 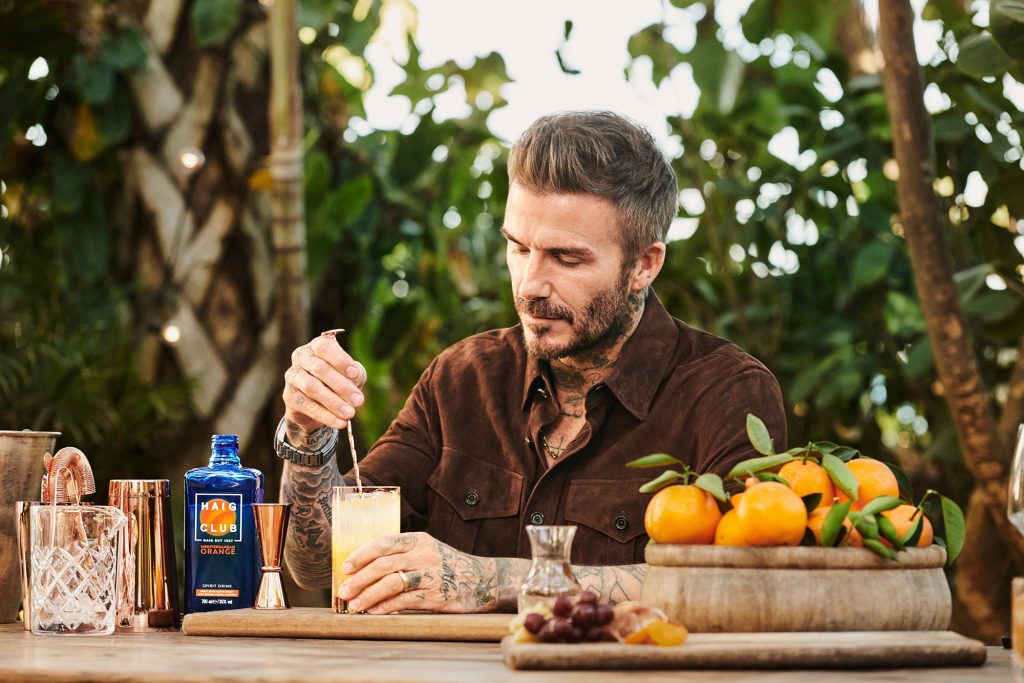 To the naysayers Emma Briones, whisky writer and communicator, insists that flavouring ‘whisky’ “can also be a craft”. “There’s snobbery among classic whisky drinkers, not only towards flavoured whiskies, but towards any kind of innovation. Younger whisky drinkers are moving away from that and are more interested in trying new whisky profiles, but years of whisky education are hard to change.” Ballantine’s Brasil, for example, is made by selectively steeping Scotch whisky with Brazilian lime peel and vanilla extract in second fill ex-bourbon casks. “It works marvellously with lemonade or with ice on a hot afternoon”, says Briones.

Paskin recommends Haig Club Mediterranean in a Spritz with Prosecco and soda, and also as a replacement for vodka in a retro Cosmopolitan (thanks Gen Z for “bringing back everything ’90s”). Or serve as a highball topped up with soda and a touch of bitters, suggests Hampden-White, perhaps a honey-flavoured whisky with ginger ale and a couple of dashes of chocolate bitters? And you won’t go wrong with an Old Fashioned. Let’s forget convention and tradition, just for a minute. These flavoured malts are all about fun and frivolity, and we’re 100% here for it.