Five minutes with… The Thinking Drinkers

Henry Jeffreys
1 Comment on Five minutes with… The Thinking Drinkers

Ben McFarland and Tom Sandham are the Thinking Drinkers, two friends who a few years ago had the brilliant idea to combine booze with comedy. We spent some time with them talking about Richard Burton (the other one), Monkey Glands (cocktails), and The Thinking Drinkers Almanac (their new book).

Though you’d never guess it from reading certain drinks publications, alcohol is meant to be fun when consumed correctly. Yet most drink events aimed at the general public can be a little dry. And we’re not talking about sugar content.

There’s clearly a gap in the market for fun but slyly educational events because The Thinking Drinkers, Ben McFarland and Tom Sandham, have been packing out theatres around the country. Come to one of their shows and you’ll laugh, taste some delicious drinks and you might even learn something.

Since humble beginnings at the Edinburgh Festival in 2011, the duo have become something of a two-man business empire with stage shows, a podcast, newspaper columns, and books including their brilliant Enlightened Guide to Alcohol.

Their latest book is an offbeat bibulous journey through the year called The Thinking Drinkers Almanac. Each day it picks out great moments from history and a drink to go with it. For example, today, 2 February saw the publication of Lord Byron’s The Corsair. Apparently the noted literary rogue, on tasting a particular wine from Bordeaux, commented: “Quel remede pour chasser le spleen”. Literally translated this means “what a remedy to dispel the spleen”, but it really means “what a great cure for melancholy.” Ever since then this wine has been known as Chateau Chasse-Spleen. So now you know!

We were delighted to sit down with the lads over a few beers to find out what makes them tick. Oh, all right, we emailed over some questions and they replied.

Anyway, without further ado, put your hands together for the Thinking Drinkers! 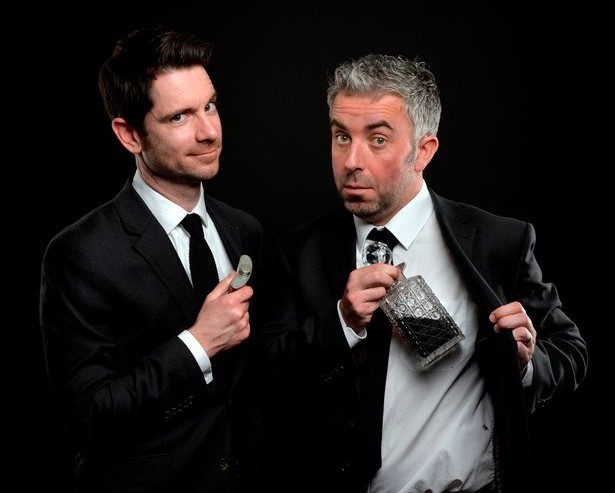 Master of Malt: When did you realise that drink was more than just something to sip on a park bench with your mates?

MoM: Was there a particular drink epiphany?

TD: There was a time when we didn’t really like Scotch Whisky. We were young, we were stupid. An epiphany occurred on a jetty, at sundown, on the remote Hebridean Isle of Jura – meaning “Island of the Deer”. With dram in hand, we watched several deer trying to swim across to Islay on a manic mating mission, hot-hoofing it across the narrow Sound in search of other, presumably, more sexy deer. As Bambi & Co bravely breast-stroked the strong currents on their carnal quest, it all instantly came together in an instant; the sea, the sunset, the smells, the silence, the salty air, the sex-starved members of the Cervidae family….

MoM: What did you both do before you became Thinking Drinkers?

TD: We were proper newspaper journalists delivering “yesterday’s news tomorrow” for local papers in Brighton and Hertfordshire. We then met on the Publican Newspaper, which has now folded (little paper joke for you there), and wrote about everything from smoking bans and snacks to garden furniture and alcopops.

MoM: Where did the idea come from to mix alcohol and laughter?

TD: To be fair, it wasn’t our idea. People have been drinking and laughing for centuries. But around 2010, we were doing tastings at food and drink festivals up and down the country and became disillusioned with how dull and earnest other talks could be – monotone monologues telling audiences what aromas and flavours they should be getting.

So, backed up by a very sound knowledge of what we were tasting, we started mucking about and cracking jokes to keep people’s attention – focussing less on flowery tasting notes and more on the people, the places, and the past that shaped each drink.

Whilst doing some tastings at a food festival in Edinburgh, we stayed up there and spent some time at the Edinburgh Fringe Festival – checking out comedy shows and theatre. This gave us an idea and within a year, and with no theatrical experience beyond leading roles in primary school productions, we wrote and produced our first show and found ourselves on stage, performing at the 2011 Edinburgh Festival.

It was called ‘The Thinking Drinker’s Guide to Alcohol’, a unique comedic drinking show during which audience members sip discerning drinks and learn more about the role of alcohol in history. Following sell-out shows and excellent reviews, it returned to Edinburgh in 2012 at a bigger venue and also transferred to the Soho Theatre in London’s West End. It was performed at the Cheltenham Literature Festival before enjoying a three-month run at the prestigious Teatra Caser Calderon in Madrid, Spain. Since then, we have written and performed half-a-dozen shows and now tour the show nationwide placing discerning drinks in the hands of more than 15,000 theatre-goers whilst spreading our “Drink Less, Drink Better” mantra.

MoM: What are you up to at the moment?

TD: Our new show, ‘Thinking Drinkers’ Pub Quiz’ is currently on tour and, after a two-year pause caused by Covid 19, we’ll be returning to the Edinburgh Fringe Festival for our tenth year.  We’ve got some great drinks for you – Coldharbour Lager from the Brixton Brewery, Diplomatico Reserva Exclusiva Rum, Warner’s Rhubarb Gin, Toki Whisky, and Elijah Craig Kentucky Straight Bourbon.

We also have a Thinking Drinkers Club – a subscription service where we send members lovely drinks in the post every month along with a magazine and an invite to an awesome online tasting. Sign up on our website. Please.

MoM: What’s the best country to drink in?

TD: France is pretty good isn’t it. They don’t tax their pleasures as we do in the UK. But we’ll give it a go anywhere really – as long as it’s not illegal. 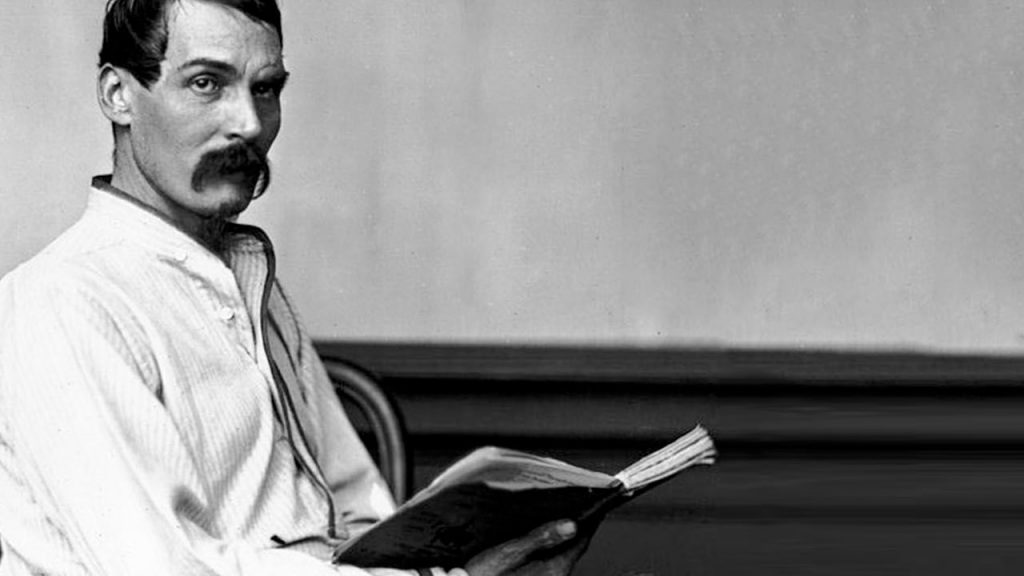 Richard Burton, the other one

MoM: Who is your favourite drinker/ drink personality from history?

TD: Captain Richard Burton. He was one of those posh polymath people from the Victorian era that somehow squeezed several lives into one. He was an adventurer, explorer, geographer, anthropologist, fencer, duellist, government assassin, soldier and spy who explored the world for 50 years. Unlike some of his contemporaries who fled Britain to map uncharted wilderness, Burton didn’t foist himself on foreign cultures – choosing rather to fully immerse himself in local life, often heavily disguised.

Wherever he travelled, he got to know the locals extremely well. Almost too well, some would say – whilst working as an undercover agent in India, his report into male brothels in Karachi had to be shelved for being a little too detailed – and almost ended his diplomatic career. He was well-known for being a prolific swordsman with a fondness for both sexes. His amorous adventures earned him the mucky moniker of “Dirty Dick”- a racy reputation further rubber-stamped when he brought back the Kama Sutra from India and translated it.

Whilst stationed in Trieste, Italy, he wrote The History of Farting whilst wearing a fez and when he translated The Perfumed Garden, a 15th-century Arabic sex manual, he bemoaned the lack of bestiality and homosexuality. Proficient in 40 different dialects, Burton was certainly a cunning linguist – so it’s no surprise he liked a fancy liqueur. A broad-minded drinker, he often began each day with a Morning Glory, an aptly-titled cocktail containing absinthe and whisky.

MoM: Did you do Dry January?

TD: No. It’s a silly idea – unless, of course, your relationship with booze is a bit rocky. Instead, read our book and use it to spend your recommended 14 units a week in style – we’ve included the level of alcohol in each drink to help you do so. You’re welcome.

MoM: Do you have a guilty pleasures drink?

TD: If you do it properly, guilt should never be an emotion experienced whilst having a drink. Unless, of course, you’re a pilot.

MoM: What drink do you love that deserves to be better known?

TD: The Monkey Gland. Back in the 1920s, French surgeon Serge Voronoff declared that monkey testicles were key to halting the human ageing process. To prove this, he grafted one onto an elderly Frenchman. Actual monkey gonads, onto an actual French man. He then repeated the process with more than 500 other Frenchmen – none of whom benefitted in any way whatsoever.

Shake all ingredients with ice, strain into a chilled cocktail glass, and garnish with orange peel. Serve with monkey nuts.

Go to www.thinkingdrinkers.com for more information and tickets to shows. The Thinking Drinkers Almanac is available from Amazon and all good book shops, and some bad ones. 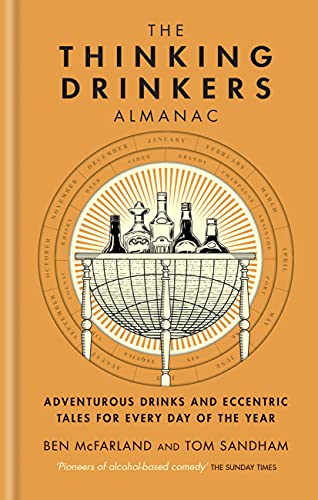 The Opera: a cocktail fit for the Queen