Cocktail of the Week: The Aviation

Annie Hayes
No Comments on Cocktail of the Week: The Aviation

Created at the dawn of commercial air travel, the Aviation is fittingly named for its celestial pale purple-blue hue. A mix of gin, maraschino liqueur, lemon juice and crème de violette, this classic pre-Prohibition serve can be tricky to balance – but get the proportions right, and you’ll be rewarded with a delicate, floral, citrus-forward sipper. Here’s how to make it…

While mankind has attempted to fly, without much success, for two thousand years, it wasn’t until the early 20th century that advances in technology and aerodynamics made powered air travel possible. Soon after the Wright Brothers landed their first flight in 1903 – a total distance of 37 metres, shorter than the wingspan of a Boeing 747 – the Aviation was shaken into existence at the Hotel Wallick in New York.

Created by head bartender Hugo Ensslin, the first published recipe for the cocktail appeared in his 1916 book, Recipes for Mixed Drinks. It called for one third lemon juice, two thirds El Bart Gin, two dashes maraschino, and two dashes crème de violette, with simple instructions: ‘Shake well in a mixing glass with cracked ice, strain and serve’. Over the course of the ensuing decades, crème de violette became increasingly scarce in Europe and America, and in the 1960s, it disappeared from the US market altogether.

As the defining ingredient of the cocktail began its descent into obscurity, Harry Craddock chose to omit it from the Aviation recipe in his 1930 Savoy Cocktail Book. It’s often thought Craddock ditched crème de violette due to its scarcity, but it’s listed as an ingredient in the drink preceding it – the Atty Cocktail – so perhaps not. Either way, the drink was made with gin, lemon juice and maraschino liqueur from them on – essentially a Gin Sour – and lacked its signature sky-blue colouring. 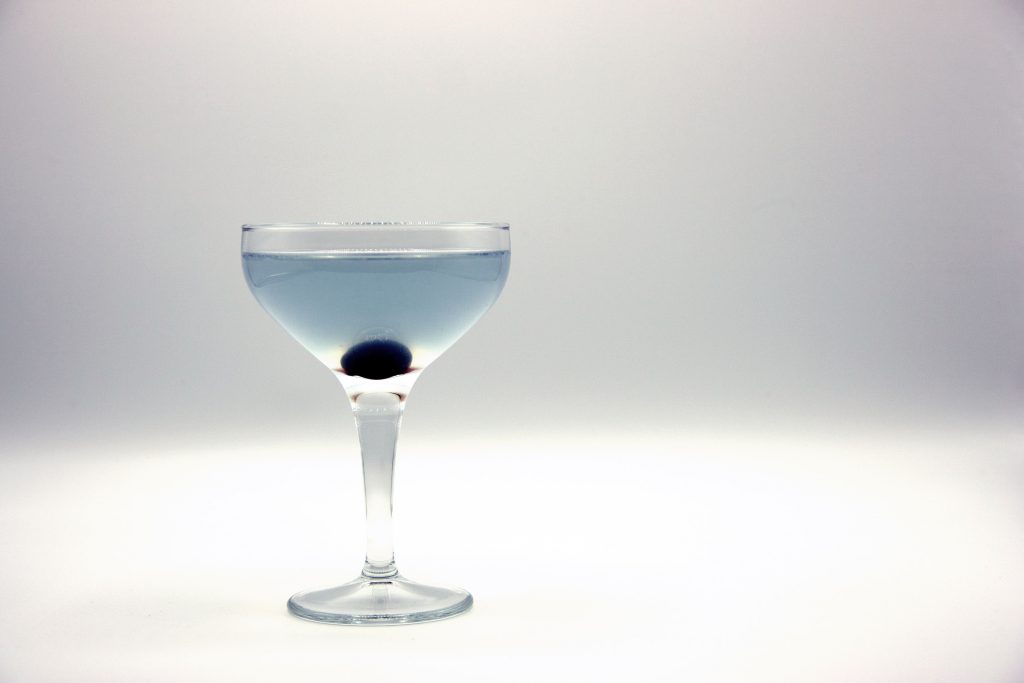 An Aviation made the way nature intended, with crème de violette

Even today, debate rages on about whether crème de violette has any place in an Aviation. Whatever your view, it’s certainly one of the tricker cocktail ingredients to work with. Too much, and your drink tastes like scented bubble bath. Too little, and the flavour is washed out with citrus. Get the balance right, however, and it’s “disarmingly drinkable,” says bar legend Russell Burgess of Loves at Ladies & Gentlemen in Kentish Town and cocktail consultancy Wet & Dry.

“As the base spirit, gin is the foundation of the Aviation,” he says. “I’d go for something floral as opposed to savoury, and with a slightly higher ABV – such as LoneWolf Gin, which lists lavender as one of its key botanicals.” The crème de violette brings “powerful floral notes, a sweetness, but also an acidulant element to the cocktail, while the maraschino adds another layer of taste, bringing a subtle fruitiness to the drink. And finally, the lemon juice – while I’m a fan of using acid blends for lots of cocktails, the lemon has to be fresh here.”

Meanwhile, Marc Sylvester, brand ambassador for Aviation Gin and owner of Also Known As (ASA) in Banbury and Frequently Asked Questions (FAQ) in Bicester had an unsurprising gin recommendation: “Aviation Gin works perfectly in this cocktail – how could it not!, it’s not too juniper-forward, it has lovely citrus tones from sweet and bitter orange peel, while the lavender just enhances the floral notes in the cocktail. It’s also super-smooth, which really helps in a booze-heavy, mixer-free, Martini-style drink like this.”

Nailing the recipe to your personal taste requires a little experimentation, depending on the choice of gin, the quality of the citrus, and your preference for crème de violette. “All cocktails are a quest to achieve a balanced drink and you have to work at your recipes to find the balance that works for you,” says Sylvester “Some lemons are sweeter than others, so that might need tweaking to taste, and while some will love the floral notes that the crème de violette carries, others might want to dial that down a little.”

When making the cocktail, start your prep work ahead of time. “Make sure to pre-chill your glassware, even if that’s just filling it with ice before you start making your Aviation,” says Burgess. And when filling the shaker, use ice that’s been in the freezer for a while, says Sylvester. “The last thing you want is a watery cocktail. It’s also best to double strain an Aviation – this will stop you getting little shards of ice in your drink, improving the sip considerably.”

You’ll find Aviation Gin’s cocktail recipe below – but any floral gin will go down a treat in this serve. Don’t be shy about experimenting with the quantities of lemon juice, maraschino liqueur and crème de violette. And once you’re happy with your proportions, try twisting the drink. Transform it into a Spritz by topping the cocktail with Prosecco, or enjoy it “as a long drink, with the simple addition of ice and soda water,” says Burgess. The sky’s the limit, as they say.

Fill a shaker with ice, and add all ingredients. Shake vigorously until chilled. Strain into a chilled Martini glass and garnish with a maraschino cherry.