Cocktail of the Week: The Ramos Gin Fizz

Annie Hayes
1 Comment on Cocktail of the Week: The Ramos Gin Fizz

Now that you’ve mastered the Silver Fizz, we’re taking things a step further: creating the perfect Ramos Gin Fizz is a labour of love, requiring graft and grit in equal measure. Get it right, and you’ll be rewarded with a milkshake-like texture and frothy white head. Get it wrong, and you’ll be left with burning elbows and sore biceps. Aaron Wall, co-owner of London bar Homeboy, talks us through the process…

They say that if you want to strike up a conversation with a bartender, you should ask them how they’d make a Ramos Gin Fizz. And if you want to infuriate them, you should order it. While a straightforward drink at heart – the ingredients list isn’t particularly arcane requiring gin, lemon juice, lime juice, simple syrup, orange flower water, egg white, cream, soda water, and depending on who you ask, vanilla essence – the traditional methodology requires time and effort. Lots and lots of effort.

First created by Henry C. Ramos at his bar, the Imperial Cabinet Saloon in New Orleans, back in 1888, the drink is rumoured to have been shaken with ice for up to 12 minutes – some historical sources claim longer, others reason it was more like five – by an assembly line of 20 or more bartenders known as shaker men. Each would shake for a full minute to emulsify the drink before passing it along to the next employee. The Fizz is served straight up, so all that shaking “adds length to the drink,” Wall explains.

Thankfully, you don’t need a line of shaker men to recreate the Ramos Gin Fizz at home, nor do you need to shake for the best part of a quarter of an hour to get the same effects. “There’s a number of different things you can do to effectively create more dilution,” Wall continues. “You can add a little bit of crushed ice in the shaker if you want, or you can add just a bit more cold soda water when you’re making the drink.” 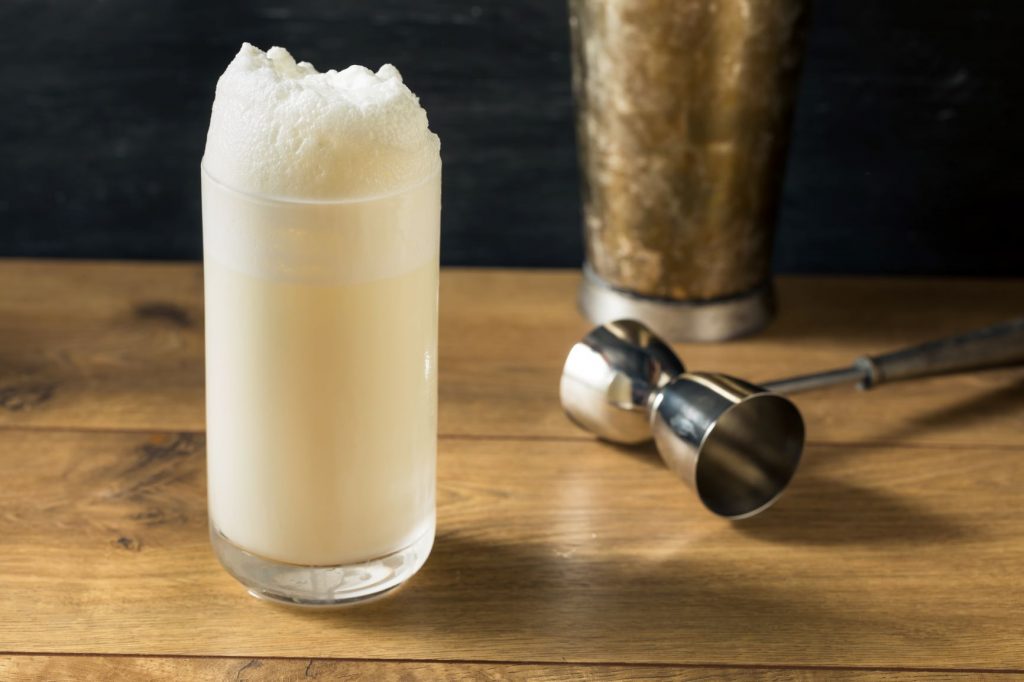 The Ramos Gin Fizz, it’s a lot of work, but it’s worth it

Another time-saving hack involves both dry shaking and wet shaking the ingredients (without the soda water, of course). “Some people debate about which order to do it,” says Wall, who opts to dry shake first. “My logic is, if you do it the opposite way around, you’ll get uneven bubbles in the top of your drink. But if you give it a quick shake without ice to break up the proteins in the egg whites and mix all together, and then shake it really hard for a while with ice, it’s spot on.”

Once you’ve shaken the cocktail for a suitable period of time – a minimum of 30 seconds dry, one minute wet – the next hurdle involves creating that glorious soufflé-like head at the top of the glass. “So highball glass, add two or three fingers of cold soda water, and then fine strain your Ramos on top of it,” says Wall. As you get to the top of the glass, stop. You have to let the head settle for a minute or two, so it sets slightly.”

Using a straw or a bar spoon, poke a hole in the middle of the top of the head, and steady your hand. “Pour more soda water in the middle, so it goes through the drink and pushes the head up,” he continues. “You should be able to get two fingers above the top of the glass, at least. When you put your straw in the Ramos, it shouldn’t fall over to the side – the drink should be thick enough or foamy enough to hold it in place.”

We told you it was tricky, didn’t we? But persevere, and you won’t just have an Instagrammable tipple. You’ll have a super tasty one, too. “The drink has texture, aromatics, botanicals, a touch of fizz, length,” says Wall. “I suppose it’s like American cream soda. You’ve got a mix of that dairy mouthfeel, but the lemon and soda make it refreshing, and the gin and orange flower water make it aromatic.”

While the Ramos Gin Fizz is recognised as a classic across the globe, the most storied place to order the drink is The Roosevelt Hotel in New Orleans. The venue trademarked the drink name in 1935 and still makes it today, as Wall can attest. “We were a bunch of geeky bartenders delighted to be there to have a Ramos,” he recalls. “This amazing lady made them for us, and she made them so effortlessly, like there was nothing to it.”

Just before she served them, he says, the head on one of them crashed over. Unfazed – and against the protests of Wall and his group, who were happy to enjoy the decapitated drink – she grinned and set about speedily making a new one. “It was her level of professionalism to make sure that everything went out looking absolutely perfect,” he says. “New Orleans is like nowhere else in America, their hospitality is so warm and genuine and fun.”

So, if your Ramos doesn’t quite go to plan on the first, or second, or fourth attempt, don’t sweat it. Just channel a little of that New Orleans energy, smile, and give it another go. Here, Wall shares his recipe for the ultimate Ramos Gin Fizz.

Chill your glassware and soda water in the fridge, Combine all the ingredients – bar soda water – in a shaker and dry shake for a minimum of 30 seconds. Add cubed ice to the shaker and shake again for a minimum of one minute. Add two or three fingers of soda water to your pre-chilled glass and fine strain the mixture into it. Leave the drink to set for a minute or more, and then poke a hole in the centre using a bar spoon or straw. Slowly add more soda water through the hole until the head of the drink is an inch or more higher than the rim of the glass. Add a straw and serve.

Master of Malt @MasterOfMalt
6 hours ago
Today’s cocktail has the ability to transport you back to the glamour of pre-revolutionary Cuba with just one sip. It is, of course, the Daiquiri and we’re making it with Ron Santiago de Cuba Carta Blanca. 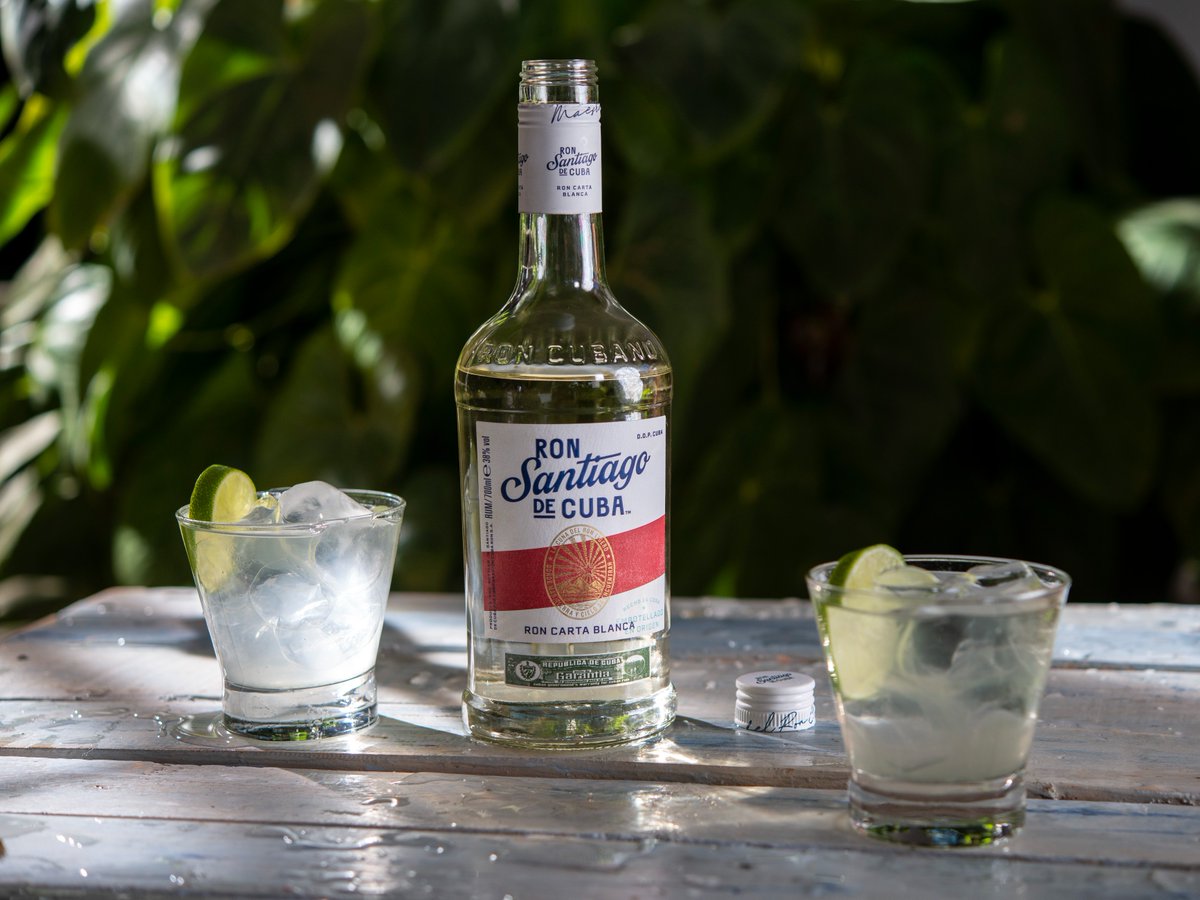 Pick up a treat for Halloween!