We’ve collaborated with the @whiskyforager himself, Colin Hinds, to create the ultimate Burns Night supper, complete with whisky pairings.

A huge part of any event is the food, but when your celebration literally contains the word ‘supper’, you really want to put together a good menu. That’s exactly what Colin Hinds, the man behind @whiskyforager and owner of Tipsy Midgie Whisky Bar, Edinburgh, has done for us.

His menu is fun, affordable (under £20 and serves four), and a modern twist on the kind of classic Scottish feast you would expect from the occasion. There’s a starter of ‘natchos’ consisting of haggis and tatties scones, a main of haggis done two ways: Hasselback potatoes and neep confirm and whisky sauce, and a dessert of an oat, honeycomb, and raspberry cranachan delice.

Each has a whisky pairing too, and it’s all simple enough to make, as well as being the perfect way to impress guests and celebrate Robbie Burns on his birthday. Here’s our ultimate Burns Night supper. 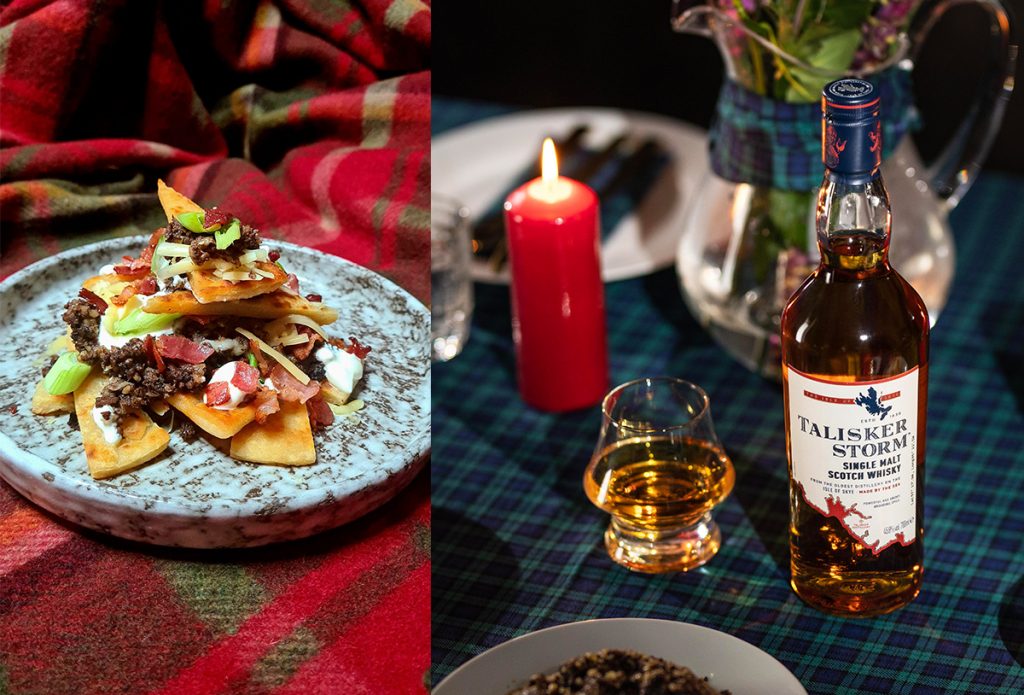 Ever had Scottish nachos?

One packet of six potato scones

A bunch of spring onions

A pot of sour cream

A block of cheddar cheese

Slice the bacon into lardons and cook until crispy in a little butter, then remove from the frying pan. Cut your potato scones into smaller triangles then fry them in the bacon-flavoured butter until crispy.

Grate cheese, slice spring onions, and heat haggis till fully cooked as per instructions on the label, then assemble the potato scones, haggis, cheese, bacon, and spring onions in alternative layers. Once assembled, add a few generous dollops of sour cream!

Talisker’s tasty stormer of a whisky is full of rich smoke and creamy fruity notes, one that was matured in specifically selected refill and toasted American oak casks to create the ideal single malt to kick off your meal. 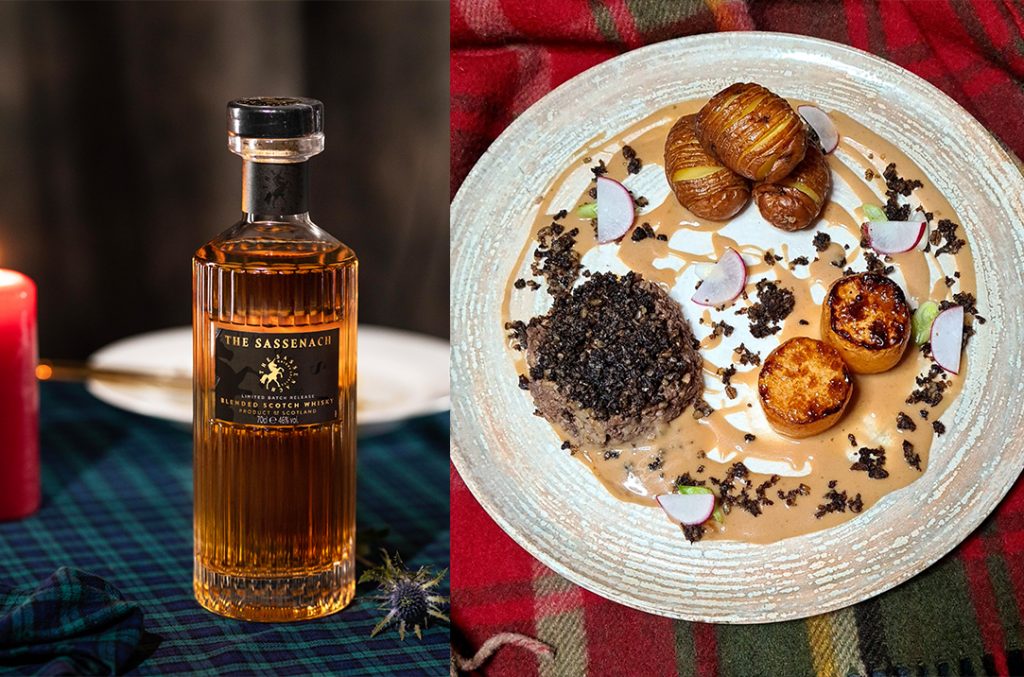 It’s simple to make but packs in so much flavour

Preheat oven to 180C. Slice baby potatoes with thin cuts all along the top of the potato until you have many cuts, only go halfway down so as to create lots of ridges, coat in oil and season, in a baking tray uncovered, and roast. This should take around 20 minutes.

Cut your turnip into thirds horizontally, then cut into eight cubes, then cut the corners to create a hexagon. Then using a potato peeler, create a round circular shape until smooth. In an ovenproof frying pan sear off the turnip in butter on both sides then add chicken stock and water until the turnip fondants are level with the liquid, put in the oven until golden and tender, it should take around 25 minutes.

The haggis we are cooking two ways, using the freshly cooked soft and creamy haggis for the majority, and the other 20% we’re putting into a frying pan and cooking until crispy. The two textures of the haggis create a harmonious and interesting flavour.

Once potatoes and fondants have been cooked remove the fondants from the pan, add the beef stock cube to the fondant liquid, and add a dram of (whisky ) and reduce, add a splash of cream and reduce until desired thickness.

Assemble the plate with the potatoes, whisky sauce, neep fondants, and two styles of haggis!

This whisky is so versatile with its waves of honey, fresh apricot, cinnamon, and vanilla fudge, that it’s honestly hard to imagine something it wouldn’t pair with. But for extra points, you can imagine yourself being Outlander while you drink it and celebrate another Scotch hero, as this whisky is from star Sam Heughan. 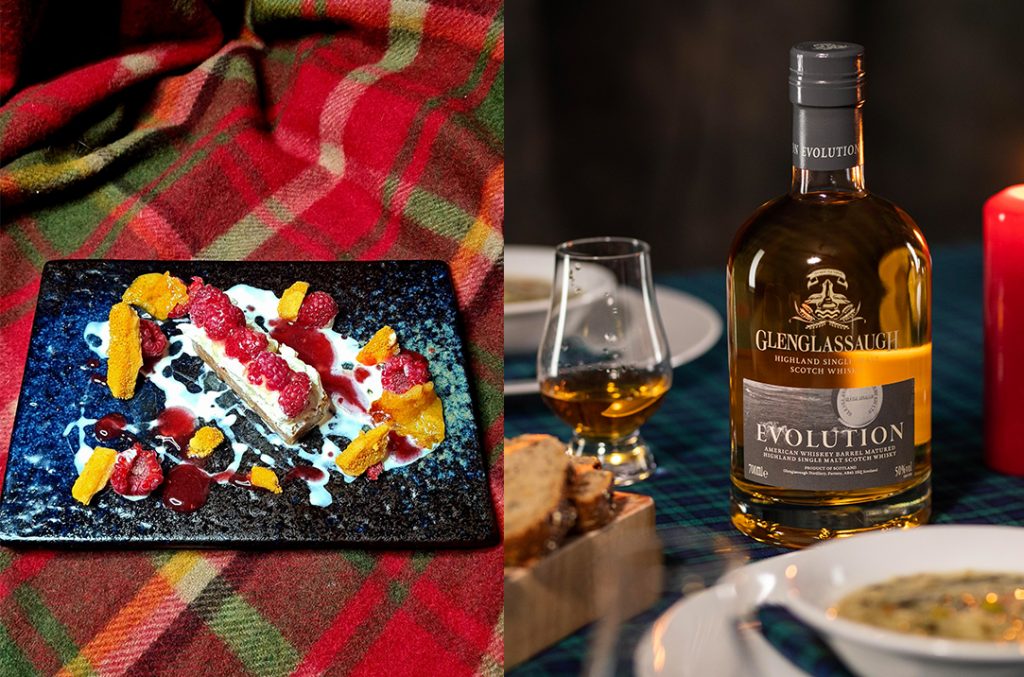 A delicious dessert that actually incorporates the whisky

Half of a pack of oat biscuits

Melt syrup and sugar gently until golden and runny, once starts to bubble, quickly add the bicarb of soda and turn the heat off, beat with a wooden spoon until it puffs up and is completely incorporated, then pour into a heatproof buttered dish. Once cool, you can break them into chunks and use them as a garnish (or eat it!)

Blitz oat biscuits with melted butter and either put them into individual moulds or place them into a cake tin, whip the cream with honey and a dram of whisky until stiff peaks, once the biscuits have set in the fridge (around 30 mins), then remove and cover with whisky cream, add some fresh raspberries. Blend some raspberries with whisky (or honey) to make a fresh raspberry coulis, then assemble the plate using the honeycomb as garnish

Sweet, warming, and inviting – like any good pub on Burns Night, this tasty single malt from Glenglassaugh was matured in casks that previously held Tennessee whiskey. One that sips and pairs beautifully, especially with the delicate sweetness of this dessert. 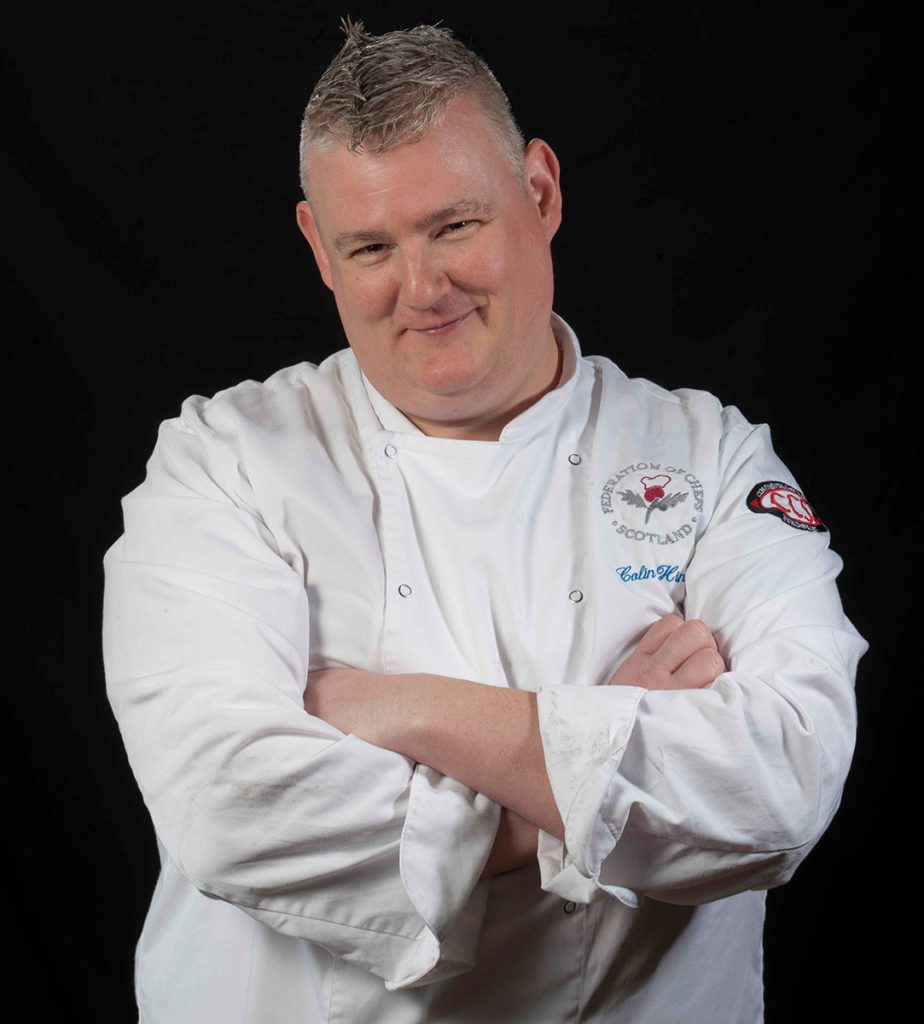