What to expect from: O’Shaughnessy Distillery

Adam O'Connell
No Comments on What to expect from: O’Shaughnessy Distillery

Whiskey fans are always excited about the arrival of a new distillery. But the opening of the doors at the O’Shaughnessy Distilling Company in August is more hotly anticipated than most. Why? We spoke to Irish whiskey legend and master distiller Brian Nation to find out.

“What you can expect from the O’Shaughnessy Distilling Company is innovation. Whiskies, and flavour profiles, that you may not have tasted before. I really feel that this is going to be a great success from a point of view of bringing whiskies to market that have not necessarily been seen before”.

Most whiskey fans will know Brian Nation for the 23 years he spent at Irish Distillers, most notably as master distiller overseeing the production of Redbreast, Powers, Midleton and Jameson whiskey. There he established a reputation as a distiller who made whiskey to an exceptionally high standard and put his infectious personality to good use as an ambassador for these brands. But in 2020 it was announced that Nation was swapping, err… nations and heading to Minneapolis, the USA to join the O’Shaughnessey Distilling Company. It was a big shock in the whiskey world and the man himself recognises it’s a significant change.

“If you said a couple of years ago that I would leave Irish Distillers to work in a new distillery being built in Minneapolis I’d have said you were mad!” Nation says. “My family have never lived outside Cork. It’s a huge move. But when the founders reached out back in November 2019 they offered me an opportunity to be involved in building a brand from the ground up. It was a chance to develop a new distillery in a new country. And to both bring my expertise and my experience to American whiskey and add to it”. 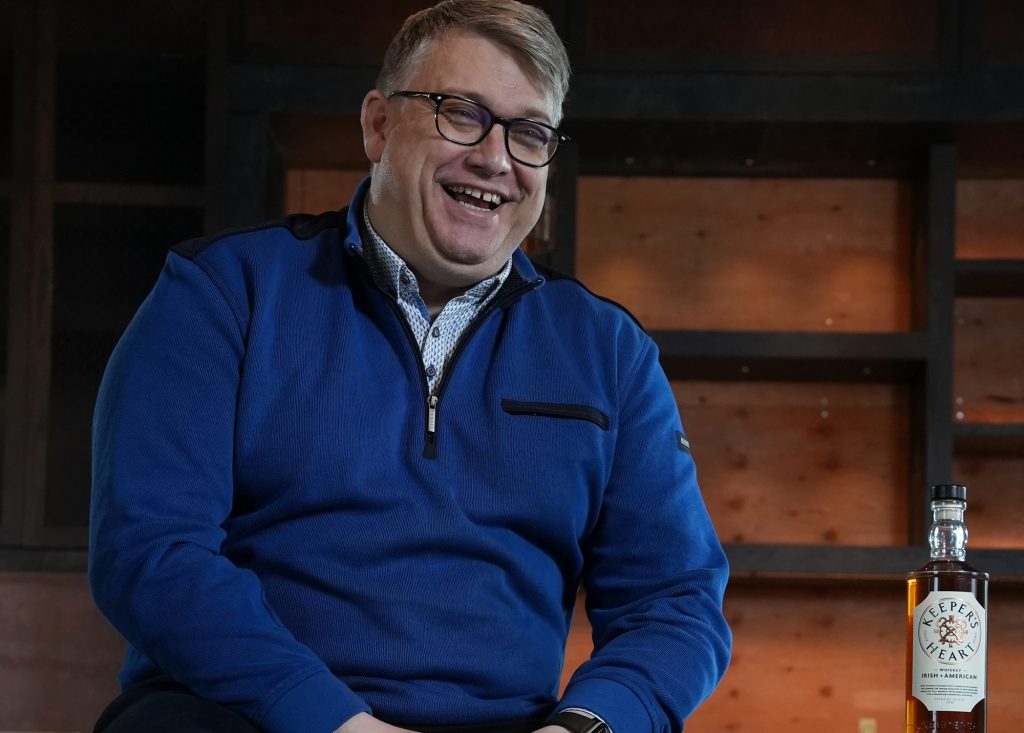 The chance O’Shaughnessy Distillery was giving Nation was to be involved at the inception of an intriguing and ambitious brand that aims to marry the best of Irish and American whiskey-making traditions. Founded by cousins Patrick and Michael O’Shaughnessy, they came up with the idea of an American whiskey brand that would honour their Irish heritage after a family reunion. “They’re proud of their Irish-American background and thought ‘why not build a distillery in America that’s inspired by traditional Irish production methods and style. A home-away-from-home?’ What they have created is a distillery capable of producing whiskies with a DNA inspired by Irish single pot still as well as triple distillation in copper pot stills,” Nation says.

In order to achieve this lofty goal, the brand has made a number of high profile appointments, including hiring former Diageo executive Mike Duggan as CEO and David Perkins, the founder of High West Distillery. But it was the luring of Nation from the biggest Irish whiskey brand in the world that really made the whiskey-appreciating public stand up and pay attention. If you’re going to create American whiskey using traditional Irish processes, then there’s surely no better man for the job.

“I’m very fortunate when you consider the experience and the training that I got in my previous life. To be part of Irish Distillers was something that I was, and always will be, proud of,” Nation says. “There was pressure there and now there’s a different type of pressure here. But the way I look at it is it’s an exciting opportunity”.

A range of different products are already planned, but we understand the brand’s flagship whiskies will be made from 100% American grains with a single pot still-influenced mash bill that includes malted and unmalted barley, which will be triple-distilled and the resulting spirit then matured in virgin American oak casks. “The whiskey should make for an interesting departure from the key American styles of bourbon and rye whiskey,” Nation says.

The distillery will also produce those more classic styles too, “some of which are in that pot distillation style and using the triple distillation process in order to maintain a consistent profile,” Nation explains. He adds: “The key is to get the correct balance of flavours from the distillate and enhance it with that lovely stronger wood contribution from the use of virgin American oak”. 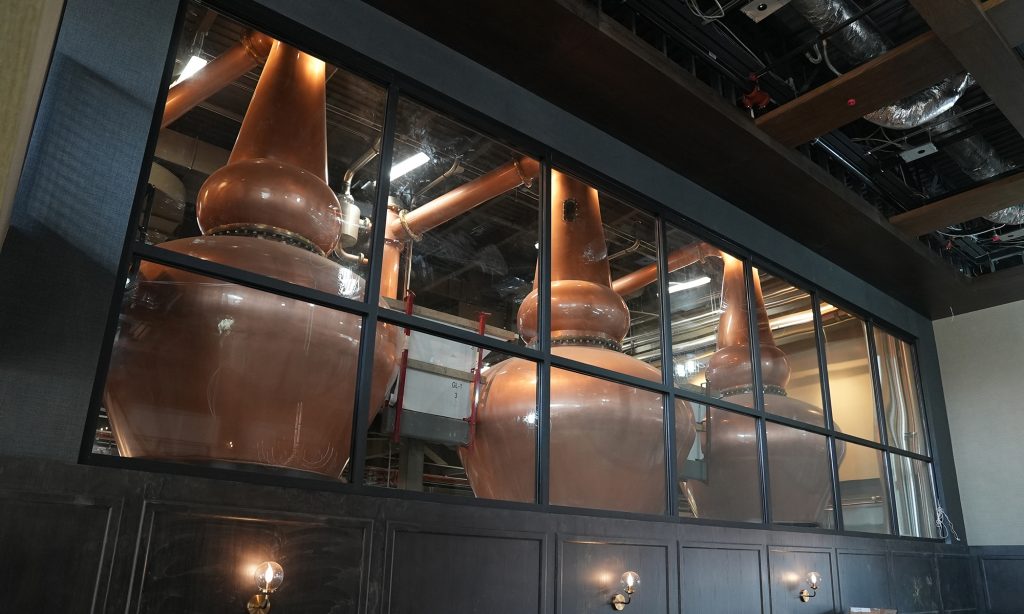 This means we should be seeing pretty unique whiskey flowing off the O’Shaughnessy stills. Column still distillation is more common in American whiskey and you’d be hard-pressed to find many brands using triple distillation. In order to retain flexibility, however, Nation had an input in the distillery’s construction, ensuring the pot stills were versatile enough to switch between triple and double distillation as he pleased.

There’s also a column still to produce more classic bourbon whiskey, as well as a dedicated gin still and a vodka still. The branding for both the distillery’s gin and vodka has already been teased and they will be called Guard & Gate and Tower Hill respectively.

Explaining the production process of O’Shaughnessy Distillery’s whiskies in full, Nation says “we start by bringing whole grains into different silos, which will then go through a four-roller mill into a grist case which will pneumatically send the grain over to our mash cooker. Then we mix our water and our grain into our mash cooker. For the column side, we will do our high-temperature cooking, while the batch or the pot still we will do different temperatures for our conversion as required by what we’re making in that run”.

He continues: “Currently, we have four fermenters, with the capacity to go to six. After fermentation, the liquid will go either to the column or the pot stills. We have three copper pot stills, a wash still, a feint still, and a spirit still for our triple distillation process. A five compartment vessel will take each of the intermediate products and our final distillate. Once we collect the heart of the distillate we will then reduce that down to casking strength and send it off into our barrels”.

As far as the brand’s wood programme goes, right now all Nation can confirm is that the bulk of maturation will take place in virgin American barrels, with some refill barrels also being put to good use. He does add, “Who knows, over time we might start using some other seasoned oak barrels as well. There’s a great flexibility that we will have at the distillery, in relation to using different cereal types, using different yeast types, producing different distillate styles. I think we’ll develop a matrix of whiskies”.

Nation is also excited to experience a different maturation climate. “I’m actually looking forward to having this thing I believe are called ‘seasons’. We don’t really get those in Ireland. In Minneapolis, you have very cold winters and then you have lovely summers. It’s going to be interesting to see the impact that it has on maturation”. 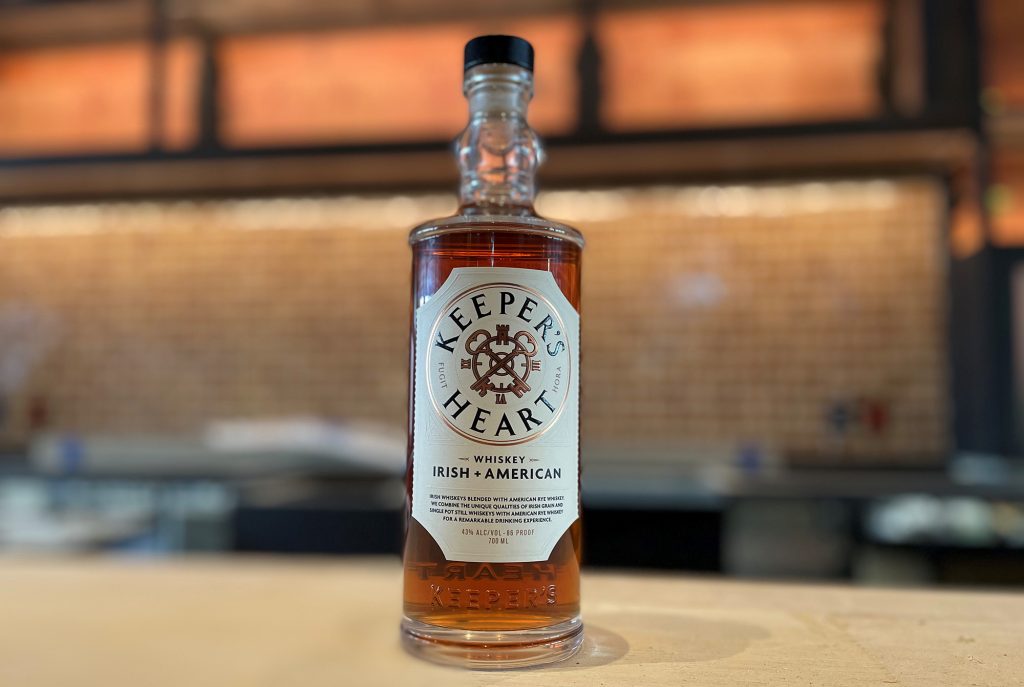 Gin and vodka won’t be the only thing to occupy Nation while he waits for his innovative new whiskey to mature. O’Shaughnessy Distillery is going down the familiar route of launching a brand of whiskey made by blending various imported liquids to create a flavour that comes close to what they want the eventual O’Shaughnessy distillate to taste like. It’s called Keeper’s Heart and will launch this summer, with the Keeper’s Heart Cask Society, a members-only society, getting the first chance to get their hands on it. Other perks include behind-the-scenes access at the distillery, personal meetings with Brian Nation, as well as personalized bottles, tastings, and an official Key to the Keep.

Keeper’s Heart Whiskey will very much set the tone for O’Shaughnessy Distillery. The upcoming blends will feature Irish pot still whiskey, Irish grain whiskey and rye whiskey, a combination I can’t recall ever seeing. It’s a challenge for Nation to get the balance right, but this is exactly the kind of thing he signed up for and he’s incredibly enthusiastic about how the team will make it work.

“Pot still whiskey can be robust with all the spice and fruit, but it has a lovely creamy mouthfeel. Grain whiskey is generally lighter in flavour but can take on more of the wood contribution, giving you a lot of vanilla sweetness, coupled with the fragrance and the floral flavours from the distillate itself. American Rye is a very vibrant whiskey with lots of spice. Putting the blend of those flavours together and getting right contributions of all of these aspects into one whiskey has been a magnificent learning curve,” Nation explains. “But it’s also setting the kind of marker for the types of flavour profiles that we’re trying to develop in our distillates going forward as well. It will be a good indicator of what’s to come.

The distillery itself is an impressive sight. Multiple bar areas (one called the Potato Bar, which I just can’t get behind I’m afraid), private spaces for events, outdoor patio seating, and food service will be available. But the gleaming copper pot stills are the star of the show, a relatively uncommon sight in the States and the centerpiece of the extensive tours the distillery will run. Education about the mission to bring new flavour profiles and showcase American whiskey with an Irish slant using the traditional, quintessentially Irish method of triple-distillation and pot stills is very important to the brand, so the distillery was built with tours in mind.

“One of the things that I have always been really interested in my whole career is education. Getting people to understand a little bit more about what goes into the craft of whisky-making. For us, it will be important to let people know what sets us apart and why that distillation and copper pot stills are so important. I would describe this as a unique selling point for us.” 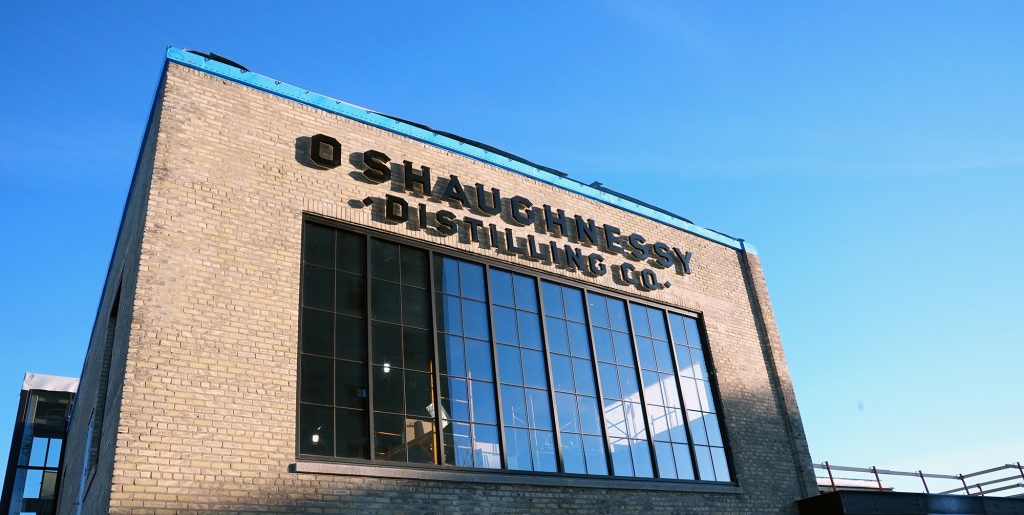 The doors open soon and some truly interesting whiskey will follow…

It’s clear speaking to Nation why The O’Shaughnessy Distillery is generating so much hype. It has the investment, ideals and personnel to create something truly interesting. And with Nation at the helm, it’s hard not to feel confident that the brand will attain its goal of creating unique whiskies that marry the best of Irish and American. Some purists might take issue. But Nation has no qualms himself. “I’m all for authenticity. For heritage. For tradition. But there’s no problem with actually marrying two traditions and cultures or taste profiles, as long as it’s done right. In such a way that you’re getting the best of both, with balance and complexity. What matters most is that you’re getting a good whiskey at the end”.

#BagThisBundle - win a bundle of goodies from El Rayo Tequila!