We took a trip to (one of) Scotland’s most northerly distilleries, Pulteney, not far from John O’ Groats, home of a single malt with a distinctly maritime heritage.

In my mind, the classic Scottish single malt distillery is nestled in a valley surrounded by a field of shimmering barley. Somewhere like GlenDronach would be the perfect example. But distilleries come in all shapes and sizes, and in unexpected places, like crammed in down a backstreet in Wick. 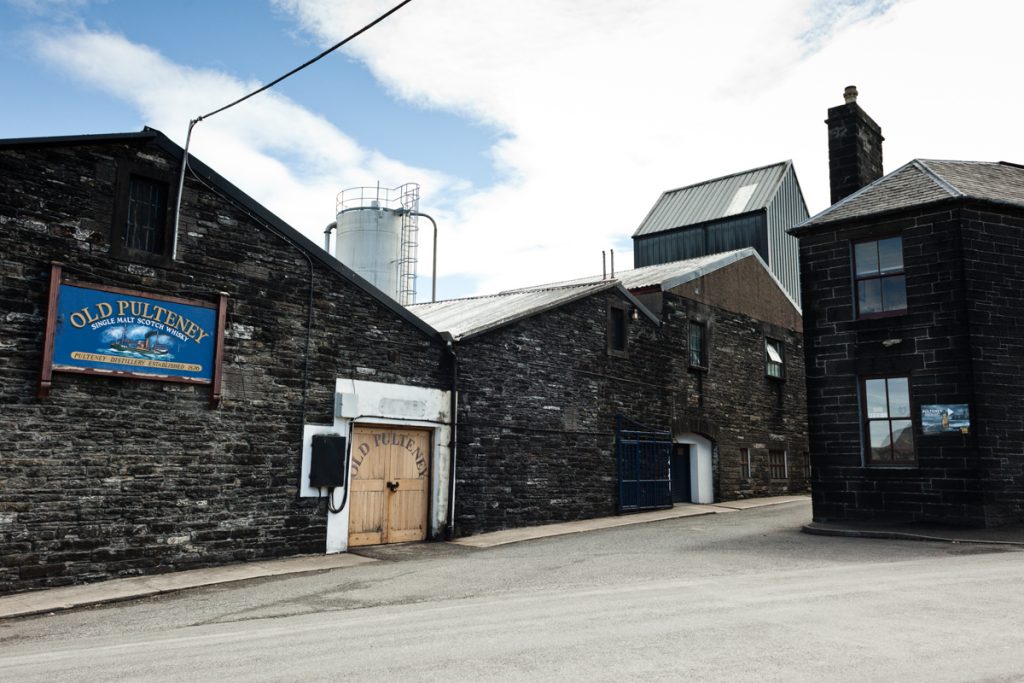 Wick is one of the northerly towns in Scotland – go much further and you’re in the Orkneys. Until very recently Pulteney was the most northerly distillery on the mainland. Wolfburn now has that crown but still, Pulteney is a long way from Inverness.

The distillery was founded by James Henderson in 1826 to cater to herring workers. At the time Wick was the herring capital of the world. Tonnes of the little fish would arrive in the town every day to be canned, pickled, or smoked, and sent all over the country. The smell must have worked up a powerful thirst.

Entering the distillery in the company of brand ambassador Lukasz Dynowiak, the first thing that I noticed was how tiny it is. There is hardly space for the strange bulbous stills, a 15,000-litre spirit and a 21,000 wash still. According to manager Malcom Waring, they had to cut off the top of the wash still to get it in. And then there’s the bizarre lyne arm which snakes off like an elephant’s trunk, if you’ll excuse the mixed metaphor. The whole place looks like the workshop of an eccentric Victorian scientist.

The distillery was refurbished in 2015/16 and the old rusty washbacks were replaced with spanking new stainless steel jobs. The other change has been the switch from distiller’s and brewer’s yeast to just using distiller’s. They use 35kg for each ferment and apparently, this means fewer deliveries by road to this remote part of Scotland with no discernible effect on flavour.

Fermentation with a clear wort takes around 60 hours during the week but they also do a longer 100-hour fermentation over the weekend. Both long and short ferments are around 8% ABV and they are combined in the wash charger before going into the stills. The clear wort and longer fermentation times combined with the reflux from the bulbous stills and long convoluted lyne arms all point to a fruity new make. The stills, however, are short and factor in the worm tub condensers and you’re going to get some heaviness carried over into the new make spirit. 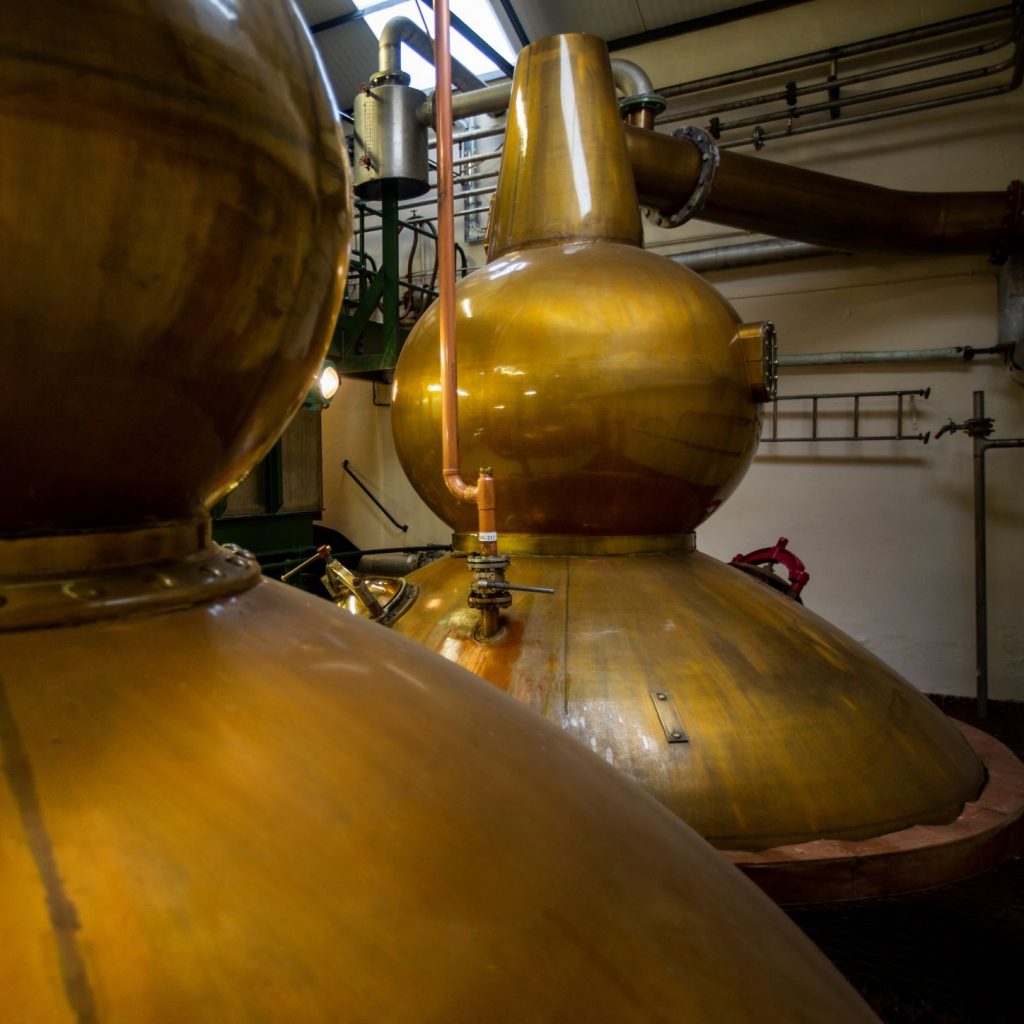 No room to swing a cat in here

Inconsistency is the new excitement

According to the distillery manager Malcolm Waring who has been at Pulteney since 1995 , the worm tubs struggle to condense the new make in the summer. It’s much easier to make whisky in the winter and indeed, summer and winter production has a markedly different character: “Inconsistency is the new excitement,” he joked.

The new make goes into casks at natural strength which means that they take longer to mature. Furthermore, all the maturation takes place on-site either in dunnage or racked warehouse. Summers are very short, “not like the Central Belt or England”, Waring said, which slows things down even further. They use mainly bourbon with some sherry butts and hogsheads, though Dynowiak said “I would love some wacky casks”.

Old Pulteney’s marketing makes great play of its maritime connection, sometimes to an irritating degree. One recent press release read: “Old Pulteney is the only brand whose story, distillery, and whisky are shaped by the sea itself.” Sounds like fighting talk. But there’s no doubt the maritime connection is strong, both historically and the fact that all ageing takes place by the sea. Unlike other ‘maritime’ whiskies one could mention.

Tasting through the Pulteney range, it’s that salty, manzanilla sherry note that stands out. They haven’t used peated malt here since the 1950s, and yet there’s definitely a whiff of saline about them. According to Dynowiak, Pultney “loses the briny taste if matured inland”. This means that they can’t really expand production, he added, because: “we have nowhere to go when it comes to warehousing, all matured onsite.”

Previously Old Pulteney came with 12, 17, and 21 year old age statements but that was changed to 12, 15, 18, and 21 for a better comparison with the rivals. Tasting across the range, I have to say that these are great distinctive whiskies that deserve to be better known. For me the 15 is the pick of the bunch but if someone else was paying, I wouldn’t say no to the 25. I’d also highly recommend a visit. There’s really no distillery like Pulteney.

The Old Pulteney range is available from Master of Malt. Click here to buy. 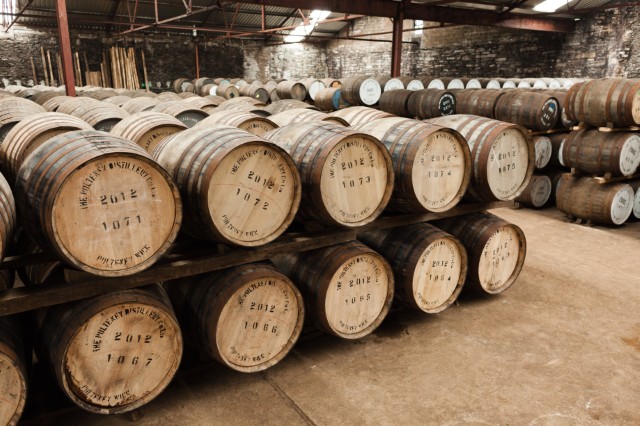 All Old Pulteney single malt is matured on site

This is an NAS whisky which spends between 18-24 months in casks that previously held peated whisky from Knockdhu.

Nose: Vanilla, apple and a touch of custard

Palate: Lovely, so creamy, vanilla and ginger, juicy and luscious, oily. I could just swill this around in my mouth all day.

Finish: Brine comes through at the end

Nose: Spice on the nose, vegetal, fennel, with green apple.

Finish:  Lift of brine at the end. It’s a sit back with a cigar and show off your cufflinks kind of dram. 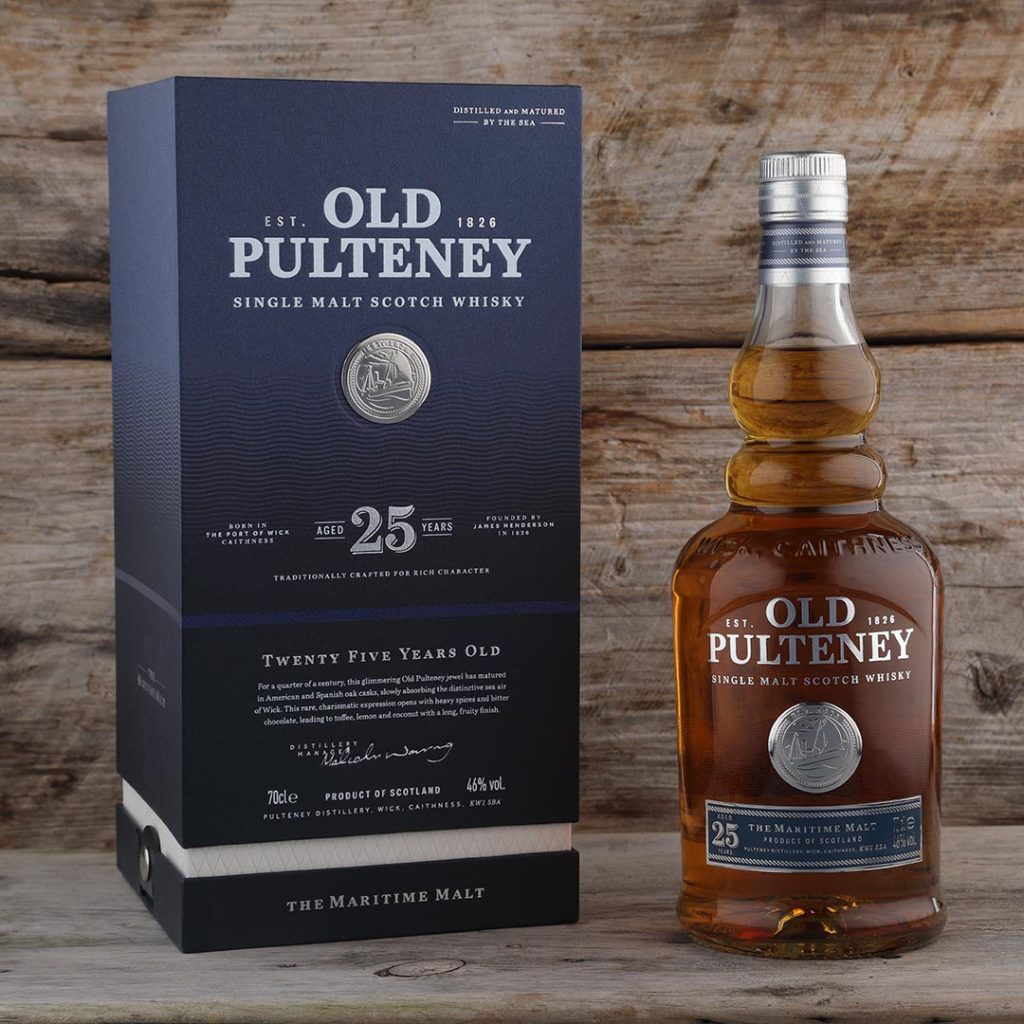 If someone else is paying