As the popularity of ageing or finishing in wine casks continues to grow in the whisky industry, Millie Milliken takes a look at some of the latest experimental bottlings out there.

On a recent trip to the Spirit of Yorkshire Distillery alongside Master of Malt’s Adam O’Connell, I had the pleasure of trying York’s first single malt whisky finished in STR (shaved, toasted and re-charred) ex-red wine barriques from Rioja vineyards in sunny old Spain. Oak, spice, vanilla ice cream and chocolate were the resulting nosing and tasting notes – accompanied by vigorous nods and satisfied oohs and ahhs from my fellow tasters.

Wine casks and whisky are becoming more frequent bedfellows. As this article goes to press, Aberfeldy is set to release its new 18 year old finished in Côte Rôtie casks as part of its Red Wine Cask Collection (more on that later); while The Oxford Artisan Distillery has made its third Oxford Rye batch which has undergone a second maturation in Moscatel casks; and Tel Aviv’s Milk & Honey has launched its Apex White Wine Cask using Chardonnay casks from local winery Domaine du Castel.

The use of wine casks in whisky isn’t new, but it’s certainly a phenomenon that has grown over the last few decades. And while we might be increasingly au fait with ex-sweet wine casks being used in whisky production (PX sherry, Sauternes, Port), whisky distilleries are increasingly playing with red wines, white wines – and even orange wines – in their quest to produce liquids with a hybrid of whisky-and-wine characteristics. 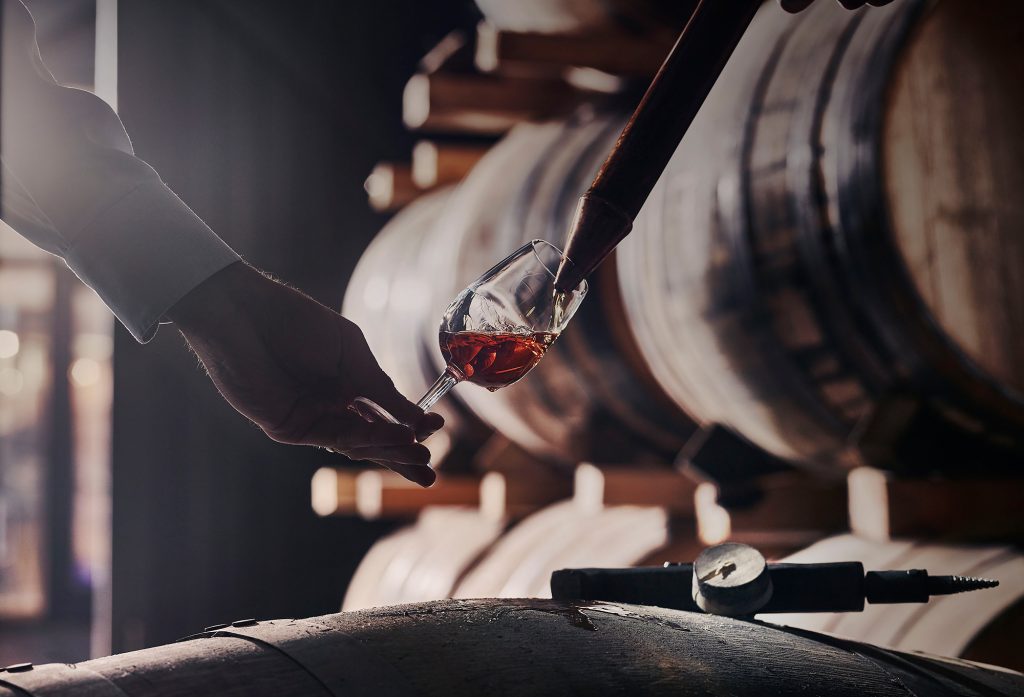 Casks at the Lakes Distillery

“Over the last few years we’ve seen lots of new wine casks coming in because we’ve got young distilleries and while your house style might take years to develop lots of these younger distilleries are using these casks for a different flavour,” explains Mark Thomson, Glenfiddich brand ambassador. “We’ve all tried ex-bourbon, rum, sherry, but wine casks seem to be a real trend.”

So, why are we all lapping them up? And what’s the difference between ageing and finishing? For Thomson, a change in consumers’ palates is a factor when determining their growing taste for wine casks, with people moving away from those sherry bombs and peated whiskies towards lighter styles. “People also know wine – there’s a familiarity there,” he adds.

Stephanie MacLeod, master blender at Dewar’s Aberfeldy distillery, agrees: “Increasingly our whisky drinkers are not only interested in the flavour of the whisky that results from a wine cask finish, but also the provenance of the wine and our whisky drinkers also tend to be knowledgeable wine drinkers – a wine finish can satisfy both passions.” 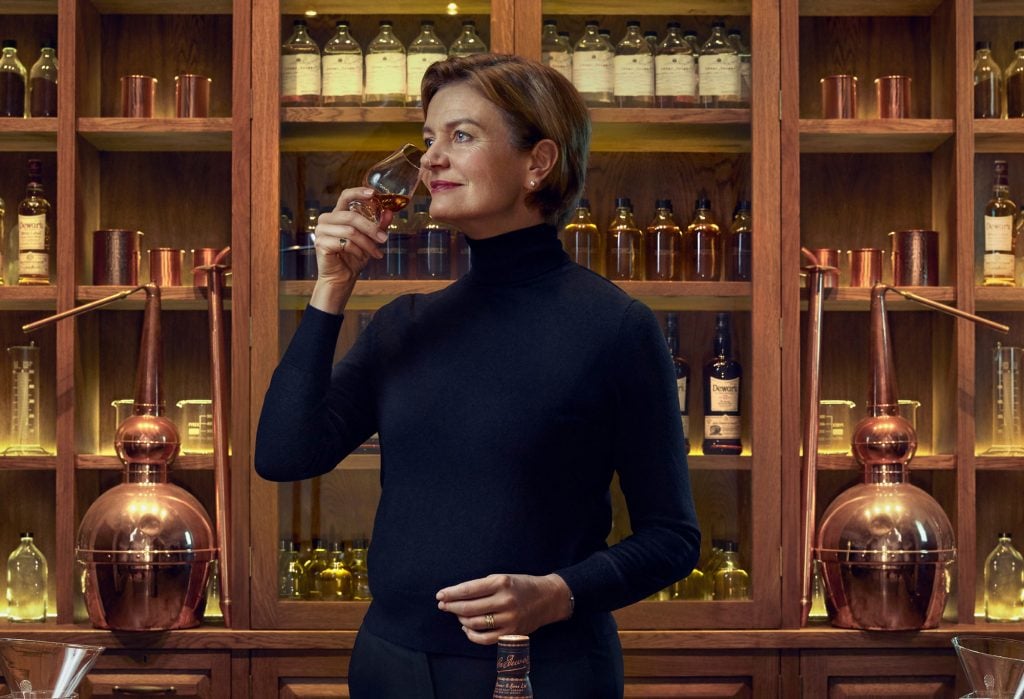 When it comes to ageing and finishing, you’re more likely to see the latter. This technique involving a second stage of ageing in a different cask often for just a matter of months came to the fore in the 1990s.

Which brings us back to that Aberfeldy 18 year old. It has spent 18 years in a combination of re-fill and re-char ex-bourbon casks, before being finished for six months in French red wine casks from Côte Rôtie – a Syrah-based wine from the Northern Rhone.

“The process always begins with the casks – we often come across parcels of wine casks and other types of casks that we think might be interesting, and think how the character of the wine cask will interact with the character of the whisky,” explains MacLeod of how she begins the process.  “Once the casks arrive we nose each one to ensure that there are no off odours and then fill the casks with the chosen spirit. This is when sampling begins: at least once a month the casks are sampled and assessed – we look at colour, aroma and maturation related compounds. Once the aroma and colour starts to have an effect on the aroma and the appearance of the whisky, we either increase sampling or stop the finishing process because the purpose of finishing is always to complement and not to dominate the character of the whisky.”

The resulting liquid is red berries on the nose, like raspberry and redcurrants, followed by the softening of vanilla and butterscotch – what the team describe as being “deeply evocative of an Eton Mess”. 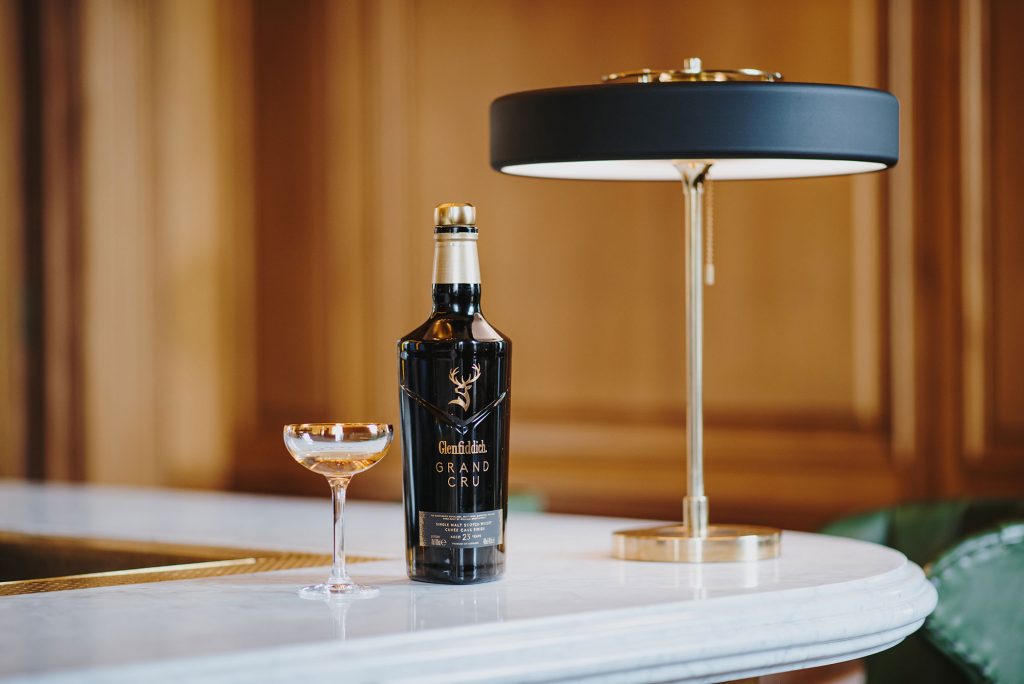 White wine casks are also used. In 2019 Glenfiddich’s first release in its Grand Series was the 23 year old single malt matured in sherry casks and finished for four months in French oak casks used for fermentation of wines that will become Champagne. Glenfiddich refer to them as ‘rare French cuvée oak casks’ because the wine was still so cannot legally be called Champagne.

Thomson elaborated: “With the Grand Cru it is important to note that no sparkling wine was involved in any stage… When the Champagne industry makes their assemblage they take a selection of still wines from their growers and leave those wines for a period of time in cask… very few these casks were offered up to us from a cask broker, and have only ever contained still wine but the quality of the wine has been exceptional.”

For Thomson, the main difference between red and white cask finishing is unsurprisingly the level of tannins (with red wine casks producing more tannins in the whisky), followed closely by a drier note in the whisky as well. With white wine casks however, “you’ll get orchard fruits, or strawberry flavours which is interesting (although not all the time).”

Meanwhile, 2020 saw The Lakes Distillery release its The One Orange Wine cask, taking its The One blend (a blend of grain and malt Scotch whiskies from Speyside and Islay with The Lakes Single Malt at the centre), using first-fill American oak casks seasoned with Vino de Naranja – a white wine macerated with orange peels from Huelva in Andalucia. The result? Marmalade, butterscotch and dried tobacco on the nose, followed by candied oranges, tropical fruits with peat smoke and a buttery finish.

So, what does the future of wine-cask ageing and finishing look like? “I have no idea,” Thomson says while also admitting that Glenfiddich has a number of experiments on the go involving wine – “but I couldn’t say”. What he is keen to impress though is that the distillery’s interest in wine casks is nothing to do with its growing trend but is an ongoing discovery for the brand.

For the team at Aberfeldy, while red wine casks from the old world have been their modus operandi to date, they are starting to experiment with new world styles. MacLeod also divulges that they are running trials at the moment on white wine, using the same approach to determine the perfect finishing period. And that’s all before the endless possibilities they have when it comes to the type of oak they use too. One style of wine will however, she thinks, remain on top: “I’m not convinced that sherry will ever be replaced in the hearts of whisky drinkers, but wine gives another dimension to the flavour of whisky – something which we are more than happy to explore.”

Master of Malt @MasterOfMalt
21 hours ago
. @RosebankWhisky Distillery launches 31-year-old whisky, the last ‘old Rosebank’ release before the distillery is reopened to the public next year.

Master of Malt @MasterOfMalt
22 hours ago
On The Nightcap this week: @johnniewalker_ gives away 270,000 drinks, @RosebankWhisky launches its last old release before the distillery reopens, and the cheapest pint in the UK is revealed.

New Arrival of the Week: Sollasa