Henry Jeffreys
1 Comment on The Dublin Liberties Distillery is open!

The Irish capital now has three working distilleries! We travelled to the opening of the newest, Dublin Liberties, to meet head distiller Darryl McNally and taste the new make spirit.

The Irish whiskey revival steams on. On Tuesday, Simon Coveney, Irish minister of foreign affairs and trade, officially opened the newest whiskey-maker on the block: the Dublin Liberties Distillery. “Irish whiskey is one of the fastest-growing spirits in global markets and one of the leading lights of our food and drink export industry,” he said. “I am delighted to turn on the Dublin Liberties Distillery stills today, as the first liquid gold flows into casks for expert maturation with the promise of a premium, uniquely Irish product.”

Master distiller Darryl McNally, added: “Making whiskey is my passion, my lifeblood, and to be doing it in the heart of Dublin’s historic distilling district is nothing short of a dream come true for me”. We were given a guided tour by McNally on the night of the launch party.

The distillery is so new that it smells like a car fresh off the production line. So far, the team has only used two of the three stills. According to McNally: “The quality of liquid is unbelievable after two distillations, but haven’t done a third yet.” He let us try some, and it was packed with sweet cereal notes and incredibly smooth, clearly full of potential. The three stills were built by Carl of Germany to McNally’s exacting specifications.

When it comes to the raw materials, “it’s all about quality and provenance”, McNally said. The distillery uses water from an underground spring found by boring 30 metres beneath the city, and the barley comes entirely from two maltsters in Ireland. The team runs two-tonne mashes – according to McNally, double what a craft producer would make (though a long way behind what he was used to at Bushmills where he worked from 1998 to 2015). The mash is given a 60-to-72-hour ferment using distillers yeast. 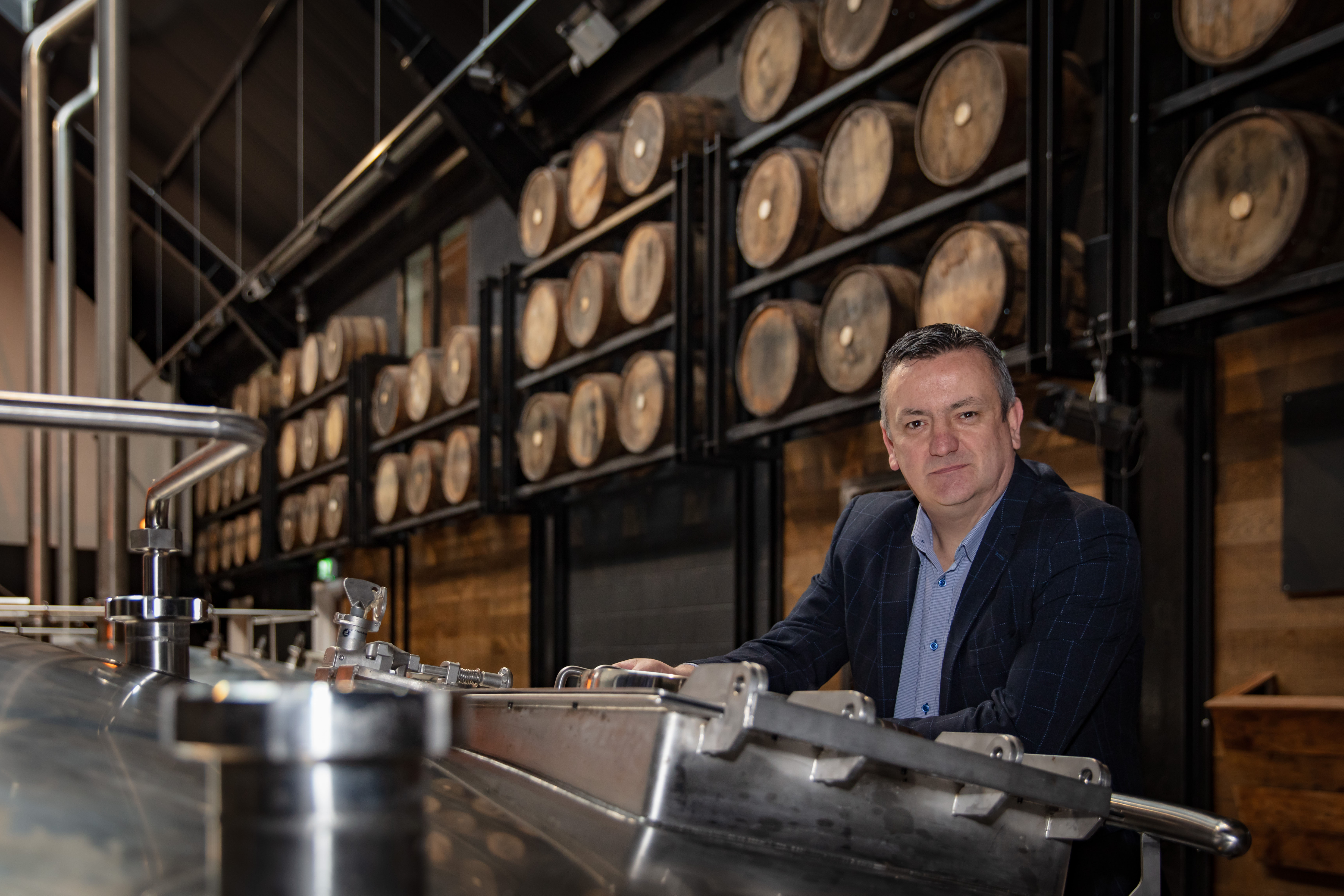 Darryl McNally and his ‘Disney’ casks

Not all will be triple-distilled. “I want to grow the category, to innovate, so will do some double-distilled and some peated expressions,” McNally continued. “One of the reasons I left Bushmills is they wouldn’t let me innovate,” he joked. Dublin Liberties currently has capacity to produce 700,000 litres of pure alcohol per year, which works out at about 2.1 million bottles of single malt. He will continue to buy in grain whiskey for blends.

One thing he won’t make is a single pot still expression. “I’m aiming for an old-style Irish whiskey, pre-1850 malt tax,” he told us. Other distilleries have already approached him and asked about whether Dublin Liberties will make some malt whisky for them. The current, confirmed plan? To produce malt whisky for Dublin Liberties brand but also The Dubliner and The Dead Rabbit, a collaboration with the renowned New York bar. All three are currently made with malt sourced from other Irish distilleries, “but I am not allowed to tell you which ones”, McNally said.

While visiting the distillery we also got to try some exciting new Dublin Liberties expressions, which Master of Malt will be receiving soon. McNally agreed when I suggested that some customers might expect a whiskey called ‘The Dubliner’ to be distilled in the city. But of course, we won’t see any Dublin-distilled whiskey for at least three years, perhaps longer (though enthusiasts will be able to buy casks in advance).

The distillery cost around €10 million to build. It’s owned 75% by Quintessential Brands, the company behind Thomas Dakin and Greenall’s Gin, and 25% by Eastern European drinks company, Stock Spirits. Dubliner and Dublin Liberties are currently sold in 30 markets, with sales totalling more than 37,000 cases in 2018. The brands’ biggest export markets are the US, Russia, Germany, Australia and Eastern Europe. 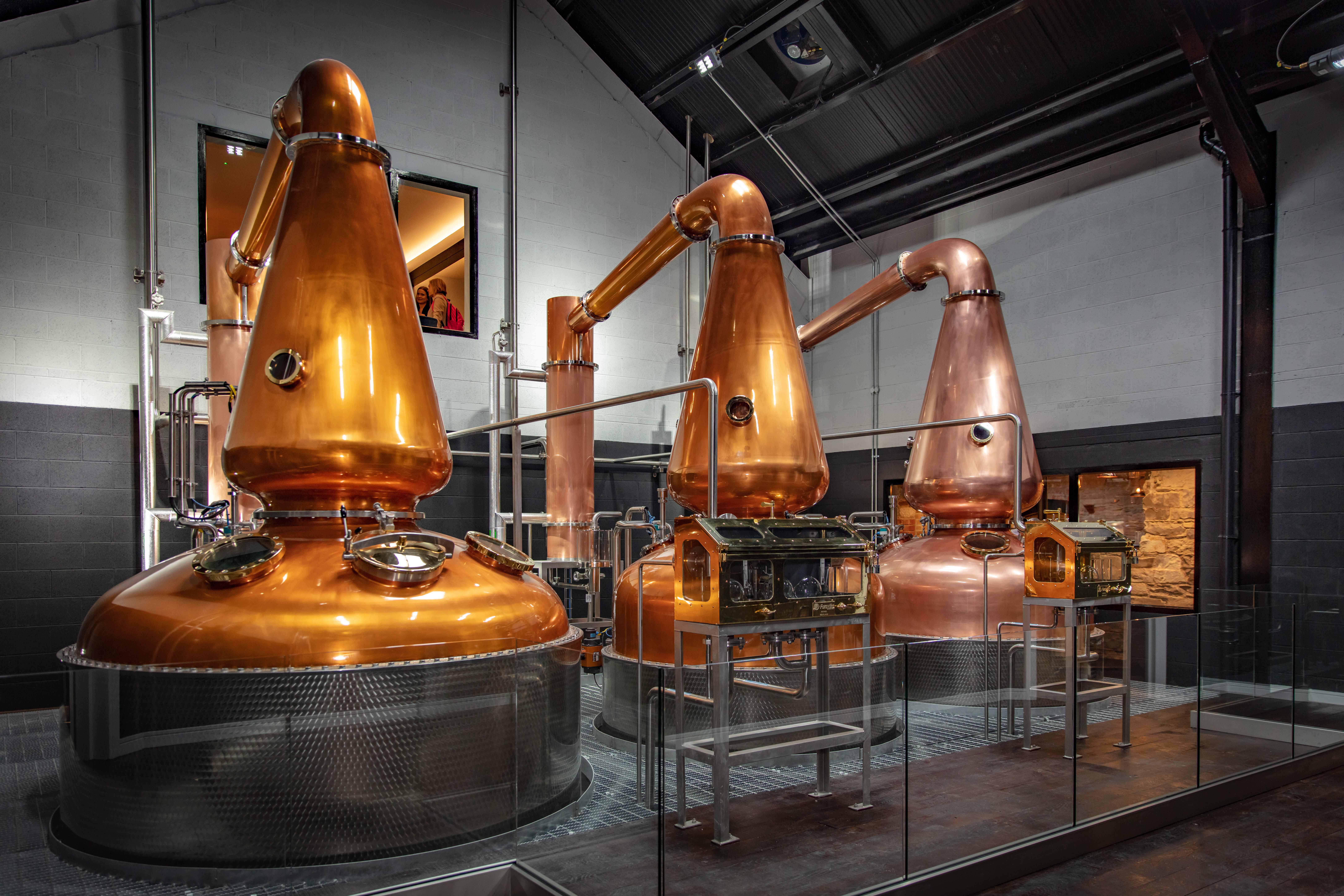 “Darryl is a constant source of ideas, and combined with his unrivalled distilling skill, there’s no limits for Irish whiskey,” said Shane Hoyne, chief marketing officer for Quintessential Brands. “It is also fantastic to be partnering with a company of Stock Spirits’ calibre. Their involvement will also provide an opportunity for the brands to expand further in to new regions such as Poland and the Czech Republic. Right now, we’re taking a moment to celebrate the team’s achievement in building this fantastic distillery but with much more to come from us this year.”

There are now 22 distilleries in Ireland in various states of readiness, with another 22 planned. “Some won’t survive; the route to market, that’s hard,” McNally remarked. Nevertheless, he is bullish about the category: “We need more distilleries, Irish whiskey is about to go off the Richter scale, and we will run out.”

The Dublin Liberties Distillery is geared up for tourism with a big bar, lots of branded merchandise, and windows into the stills so you can see the whiskey distilling. The team even has half-barrels attached to the walls which McNally described as “a bit of Disney”. The whiskey will actually be aged in County Wexford.

This part of the city looks set to become a mecca for whiskey fans from all over the world with Teeling right next door, Pearce Lyon nearby and, soon, Diageo’s Roe & Co revival.

It’s great to see Irish whiskey back in Dublin where it belongs.

Master of Malt triumphs (again!) at the Icons of Gin