Annie Hayes
No Comments on The Bourbon Series: Part Two… with Freddie Noe of Jim Beam

If there’s a gene responsible for skilful whiskey distilling, clearly Jim Beam and his descendants have it in abundance. Here, eighth generation Beam family distiller, Freddie Noe, talks whiskey forecasts, the bourbon boom, and why single barrel Booker’s will never, ever happen…

Last week we brought you the first instalment in The Bourbon Series, with whiskey chat from none other than Jim Beam Bourbon’s legendary master distiller Fred Noe. He’s not quite ready to hang up his hat just yet, but with son Freddie Noe next in line for the throne, the business will clearly be in excellent hands when he does.

Growing up in the knowledge that you’re Jim Beam’s actual great-great grandson would give anyone an inflated sense of self-importance. But not Freddie. Rumour has it the American dictionary definition of the word ‘humble’ is just a picture of his face. It might be hearsay, but after the tasting, we’d believe it.

I spent the first two-and-a-half years of my career going around each department. From receiving – where we receive the glass and labels – to the grainery, the distillery, the warehouse, shipping, bottling, R&D [research and development] as well. When I first started, the show Undercover Boss was very popular, so every department I went to thought we were filming an extra-long episode. Once they realised I was just there to learn, to help those guys do their job in any way I could, they quickly became my closest friends and now they’re like family.

I’ve been at the distillery ever since, protecting the quality and legacy of our family. Learning from dad and from my grandfather why we make our whiskey the way we make it. I instil that into our employees each and every day, and make sure that the quality and the heritage lives up in every bottle that goes out the door.

As a kid, everybody asked me, ‘what’s it like knowing what you’re going to do when you grow up?’. I wanted to be a lawyer. But then when I found out how long you had to go to school I changed my mind! [Booker and Fred] never really talked about me working at the distillery. Any time we talked about the distillery, we were [either] going to check on something, get the dog, or we were going fishing – always fun things.

When you grow up around [the business], you don’t really understand the magnitude. When I was growing up we’d host dinners and spend time with people, telling them stories. Granddaddy did the same thing – I just assumed we had a hell of a lot of parties. When I saw [dad] on a commercial on ESPN, that was when it kind of hit me, like ‘how many people across the world are watching this same commercial [with] my dad’s voice and my dad’s face?’. I was probably 22 or 23 before it really fully hit me. 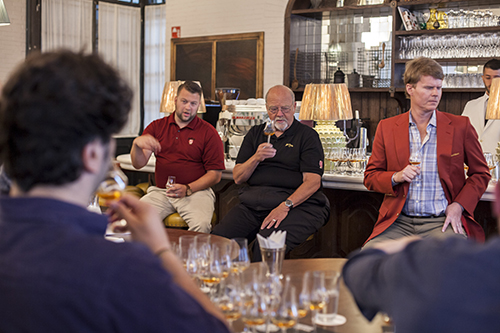 There are a lot of distilleries in our area, and each one of them has their own story, their own heritage. When people come [to Kentucky], they cannot believe that all the world’s Jim Beam is made right there at our distillery. One thing I look forward to when I’m at the distillery is speaking with people. Being able to show them that it’s not just a big factory, there are people that make Jim Beam [and they] care about the products. I like to travel too, it’s great to see what people are drinking in the different markets. Some ideas for products have come from [dad] travelling.

When we started working on Jim Beam Double Oak, everyone was looking at how to mature whiskey faster, because of the bourbon boom. Our R&D team were doing anything and everything you can think of with those barrels, [and] they hit on something with this. Literally by researching ‘can you make whiskey gain colour [and] flavour at a much younger age, without adding anything to it?’. At Jim Beam, the distillery’s running 24/7. What we’re making today won’t see the light of day for at least four years. Try and think, what will you be doing four years from now? What will you be drinking four years from now? Sometimes I think our forecast guys sit around, drink some Beam, close their eyes [and] throw a dart at the board, because [we’re] forecasting so far out.

My grandfather Booker created Booker’s, the first uncut, unfiltered bourbon on the market, in the late eighties. He followed it up with three additional products in the early nineties: Basil Hayden’s, Knob Creek and Baker’s. When he came out with that Small Batch Collection, that’s when he said [his role] really started to change. To get those liquids in front of people and let them taste the differences. As the bourbon boom and bourbon education has grown, it’s given us the opportunity to innovate and to paint different corners of the distillery. 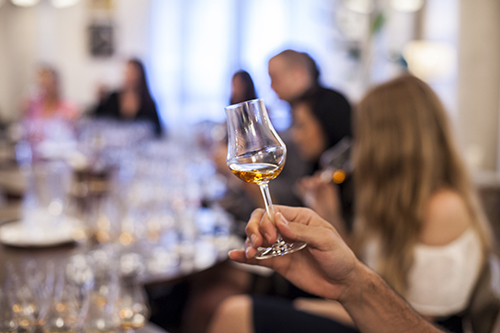 We have product guidelines – so if we’re going to innovate on a Basil Hayden’s, for example, it’s got to be very approachable. As long as we follow the guardrails for each of our products, the potential for limited offers or one-off nuances [will] be more and more prominent. If you have a flavour map, you don’t want to concentrate on one area – you want to try and paint as big of a circle [as possible] and let people taste it to see what is going to be the next big thing.

Bartenders often ask us to release a Booker’s single barrel. I just laugh, because grandaddy didn’t like the idea of single barrel. The way I run the distillery versus the way [Booker Noe and Jim Beam] ran the distillery is a hell of a lot different. At our distillery in Boston, Kentucky, they still have holes in the floor where chains would hang. If your temperature or your proof got off a little bit, there was a chain that went four stories up, and you would crank that chain to allow more steam in or to cut some steam off. He was always striving for consistency, and with single barrel, it’s the total opposite. Will we ever do a Booker’s single barrel? Hell no, because [Booker and Fred] will both be waiting for me on the other side!

In pictures: Behind the scenes at The Art of Campari exhibition