Lauren Eads
No Comments on The art of the cooper

Good quality casks are vital to every single bottle of whisky, making the role of the cooper, the person expertly in their care and creation, absolutely essential. Distillers tend to get the glory, but behind every great distiller is a master cooper.

Coopering is an ancient craft. The earliest clues to its origin begin with an Egyptian wall painting in the tomb of Hesy-Ra, which dates to 2600 BC. It shows a wooden tub made of staves held together with wooden hoops, used to store wheat. But it wasn’t until 350 BC when the Celts and Northern Europeans began making watertight wooden containers that resemble the casks we know today.

It later became understood that oak was not only the best wood to store a liquid, but that it made a wine (or whisky) taste better. More machines are now used in the cooperage, but every cask remains hand assembled by a cooper, carefully plied into a watertight vessel. 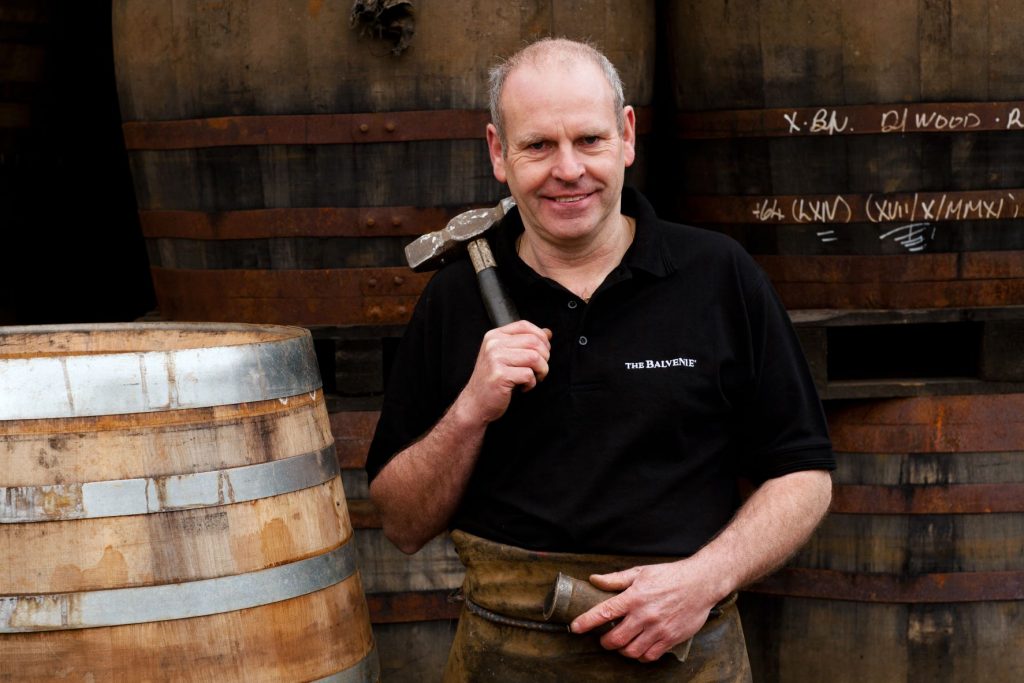 In charge of one million barrels

Ian McDonald is head cooper at William Grant & Sons, where he oversees one million barrels for The Balvenie and Glenfiddich. He started at the distillery in 1969, drawn to the industry by a love of wood and metalwork.

When McDonald started out, he was one cooper among some 1,000 in Scotland. At that time, barrels used to arrive from America in “shook form” – a barrel knocked down into a bundle of staves and shipped to Scotland to be reassembled. Now most barrels arrive complete. A downturn in whisky production in the late 80s, and at the turn of the millennium, also forced large numbers out of the trade.

Today there are around 300 skilled coopers in Scotland and the art of coopering is going through a “revival”, says McDonald. Whisky is booming and many cooperages are increasing capacity and training. But it’s not easy to become a cooper. A four-year apprenticeship and rigorous trade test is required. Only then can recruits receive the honour of being ‘tarred and feathered’ – covered in gunge and rolled around inside a barrel – making them a fully fledged cooper in the eyes of their colleagues. In October, McDonald advertised for two apprentices at Balvenie and received more than 100 applicants. “There is and has always been people wanting to become coopers,” he said. 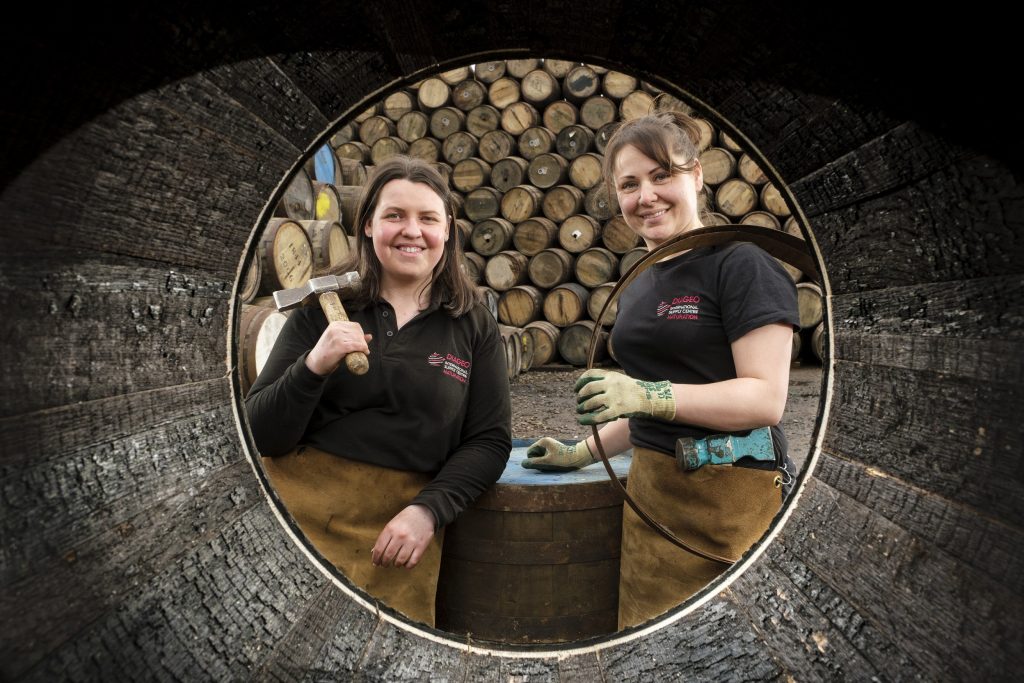 What does a cask do?

A cask is responsible for the maturation of a whisky, with all Scotch aged for at least three years. While there are a lot of elements that make up a whisky’s flavour, some suggest that around 60% of a malt’s flavours and aromas come from the barrel. Every whisky will interact with the wood differently, imparting different characteristics depending on the cask, or casks, used and length of ageing.

Think toast, coffee, cedar or sawdust – powerful, sensory aromas that fill your nostrils and immediately transport you to a barrel room. I get the same sensation when nosing sherry, where the impact of barrel ageing is tangible.

How do you make a cask?

Oak selection is crucial. Why oak? It’s strong, but bendable, tightly grained, so watertight. There are hundreds of species of oak, but the most commonly used are quercus alba (American white oak), quercus robur and quercus petraea (European oak). Others include quercus crispula (Japanese mizunara). Each imparts its own signature.

Wood is first ‘quarter cut’ (against the grain) and kilned or air-dried to ensure 100% moisture evaporation and elimination of any nasties. It is then planed and smoothed into staves and the barrel is raised, held with temporary steel hoops. Staves are steamed, or heated, to allow them to be bent into place.

Before the heads and ends are secured toasting and charring occurs, which can intensify or release another layer of flavour. Toasting is where the cask is slowly heated, penetrating deep inside the wood. It breaks down lignin, which creates vanillin – the source of a whisky’s vanilla notes. A light toast will add some vanilla and nuttiness, with a heavier toast creating richer notes of toffee and caramel. Charring is a secondary process where the inside of a cask is set alight, but it impacts only the surface of the wood. It could be lightly or heavily charred, creating flavours and aromas of smoke, toast and tobacco.

For McDonald, much of his team’s work involves rejuvenating and repairing casks for further use, removing the old surface inside a cask and then re-toasting and charring depending on the distillery’s requirements. “Most of the experiments we do now are ways of improving wood maturation qualities,” he adds. “We try toasting at different temperatures to see what works best and have also experimented in end toasting.”

The cask is then fitted with permanent steel hoops and a bung hole is drilled in the widest stave. 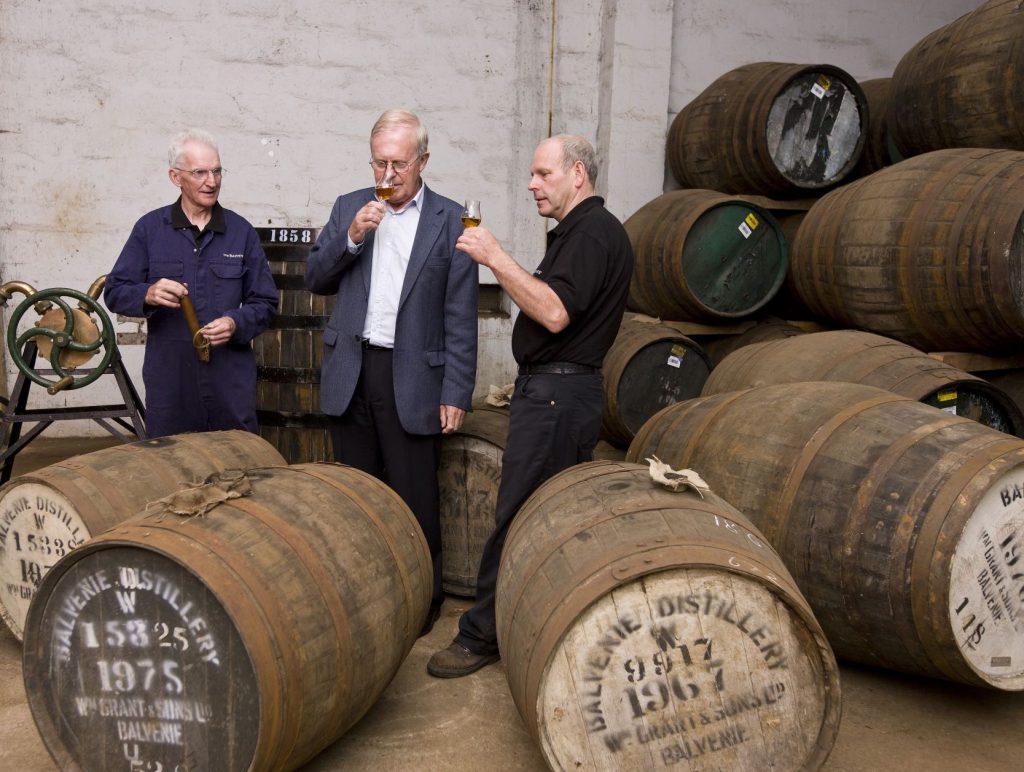 It’s a barrel of laughs at the Balvenie (from left Dennis McBain, David Stewart, and Ian McDonald)

A word on virgin and first-fill casks. Virgin casks are those that have never matured any liquid ever before. It’s a legal requirement for bourbon to be aged in virgin oak virgin casks. First-fill casks have never aged Scotch before, but may have aged sherry, Port of bourbon, for example. When used to age whisky subsequent times, it becomes a refill cask. Flavour and colour extraction lessens each time a cask is used, with second and third refill casks imparting a progressively lighter character.

The bourbon industry can’t reuse its casks, so first-fill ex-bourbon barrels are routinely shipped to the UK to age Scotch. Bourbon barrels must be charred by law. They are responsible for some of the vanilla, caramel, coconut and toffee aromas present in Scotch.

Cask finishes are a big deal

Most Scotch is aged in ex-bourbon or ex-sherry casks. But distillers will often ‘finish’ a whisky by transferring it to another barrel, previously used to age a different liquid, for a period of time, adding another layer of flavour. Experimentation in this field has grown immensely over the past decade. Some of the most common cask finishes include ex-Madeira, Marsala, Cognac or rum casks. Experimentation with (non-fortified) wine casks is also growing, with ex-Bordeaux, Sauternes and Moscatel barrels becoming popular.

A cask isn’t merely a vessel – it’s crucial to a spirit’s tapestry of flavours and aromas. A distiller might wield the paintbrush, but it’s the cooper who creates the canvas. 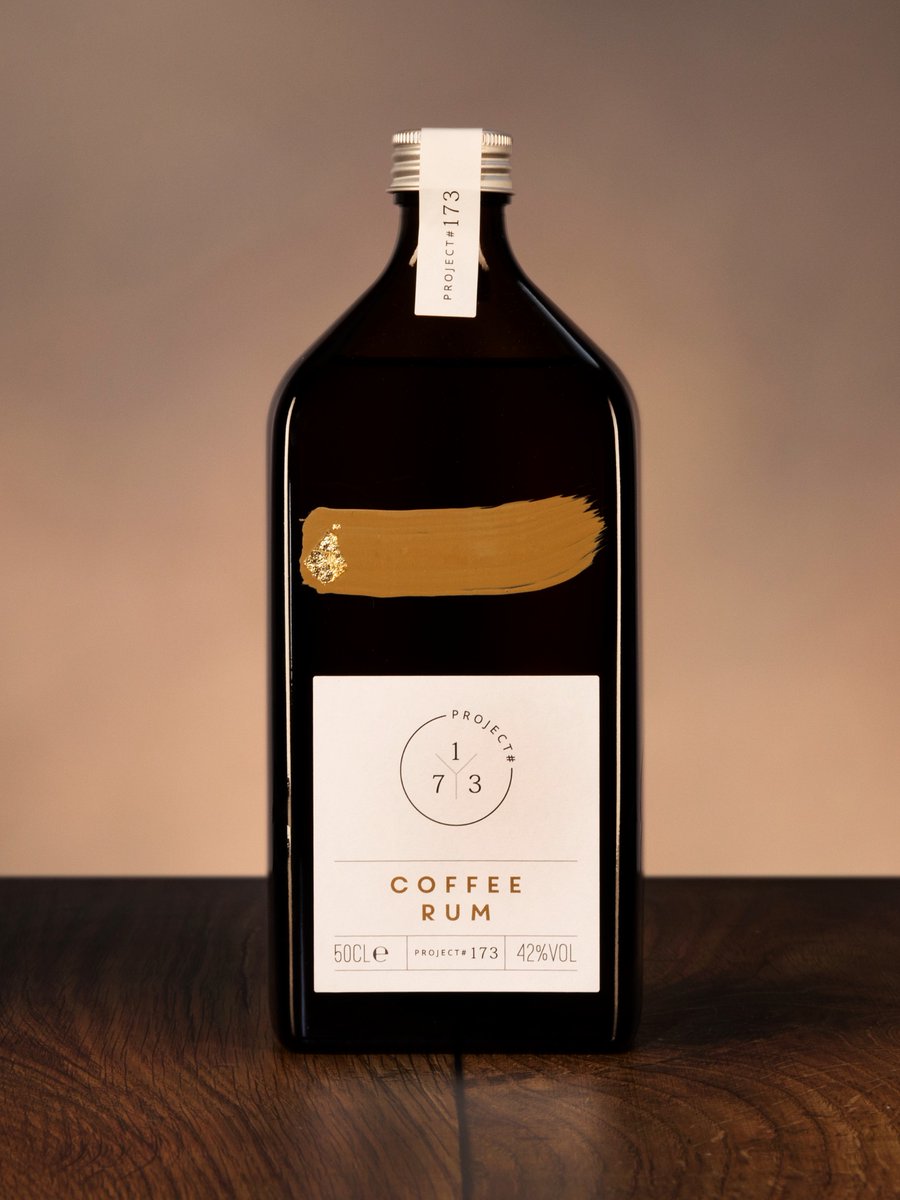