How the iStill is revolutionising distillation

Henry Jeffreys
1 Comment on How the iStill is revolutionising distillation

To make good spirits you need a room full of gleaming copper. Right? Wrong, wrong, wrong! says Dr Edwin van Eijk, inventor of the revolutionary iStill. We talk to the good doctor about automation, cask ageing and why most distillers are stuck in the past.

We met Dr Edwin van Eijk, or Odin to his friends, at an event called Speakeasy organised by Spanish spirits distributor Vantguard. Presenting after the charismatic Carlos Magdalena aka the Plant Messiah (one of the Evening Standard’s 1000 most influential Londoners, dontcha know) can’t have been easy but the doc more than kept the audience of bartenders and industry types transfixed. While he spoke, a silent lab coat-clad assistant (who I was later specifically told that I was not allowed to ask questions of) beavered away in the background with an iStill. It was like the Pet Shop Boys of distillation. 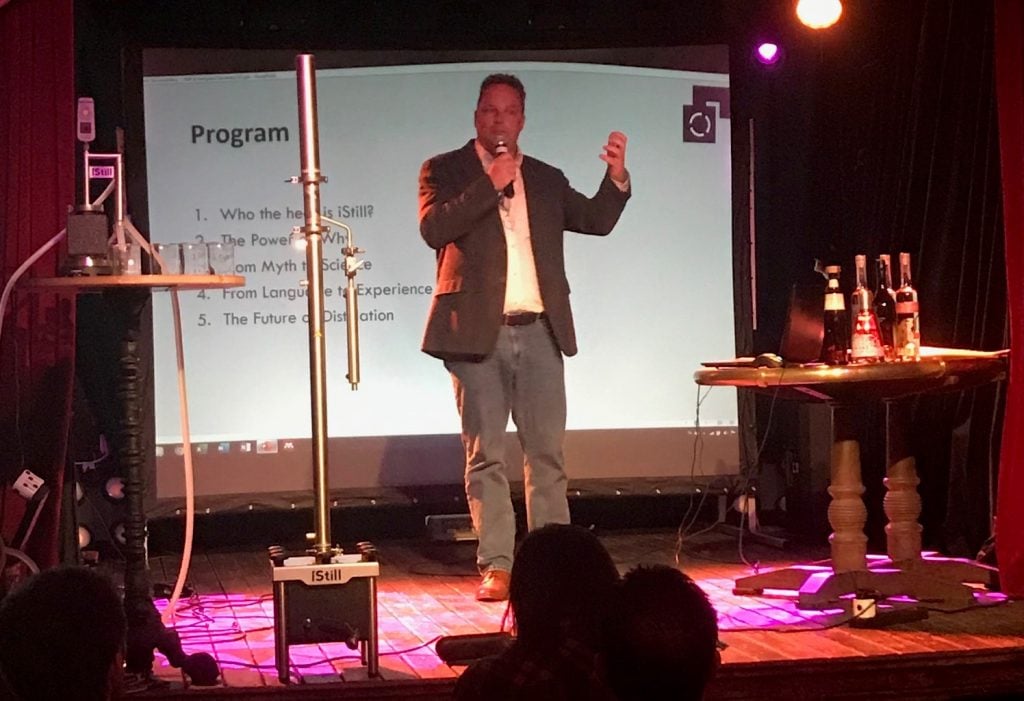 Odin in action with a mini iStill.

The genesis for the iStill comes from visits to Hungary, Van Eijk’s wife is Hungarian, a country where amateur distillation is commonplace. Most of the fruit brandies he tried were pretty rough, according to van Eijk, “but one guy came up with a nice smooth drink, no hangover. How?” Van Eijk’s curiosity was aroused but he quickly became frustrated by the unscientific approach to distillation: “I soon discovered that most information was anecdotal,” he said. “My grand grandfather did this.” For van Eijk this was good enough, he just kept asking ‘why?’

So, he built his own still, and added thermometers and automation so it could run while he was doing his day job. He quickly realised he was on to something so he quit his job, sold his house and set up his own business in 2012 with the aim of, according to the website, “making modern, game changing distillation technology.”

All iStills are made in a factory in the Netherlands. It’s now a big operation. Van Eijk claims to be the largest supplier of distillation equipment worldwide in terms of numbers sold. Such well-known operations as Dornoch in Scotland, Wrecking Coast in Cornwall, Blackwater in Ireland all use iStills. You can see from these maps how ubiquitous they have become in Ireland and Scotland.  Some distilleries have both a traditional and an iStill. There’s something for all budgets: an eight litre mini still that can be carried in a suitcase (see above) starts at €3000; whereas a 5000 litre one begins at €90,000. The company recommends customers take a four day training workshop. Odin is also very responsive in distillation forums for those who have further questions. “We are successful because we keep asking why. Innovation is only key to success. Try something different”, he said. 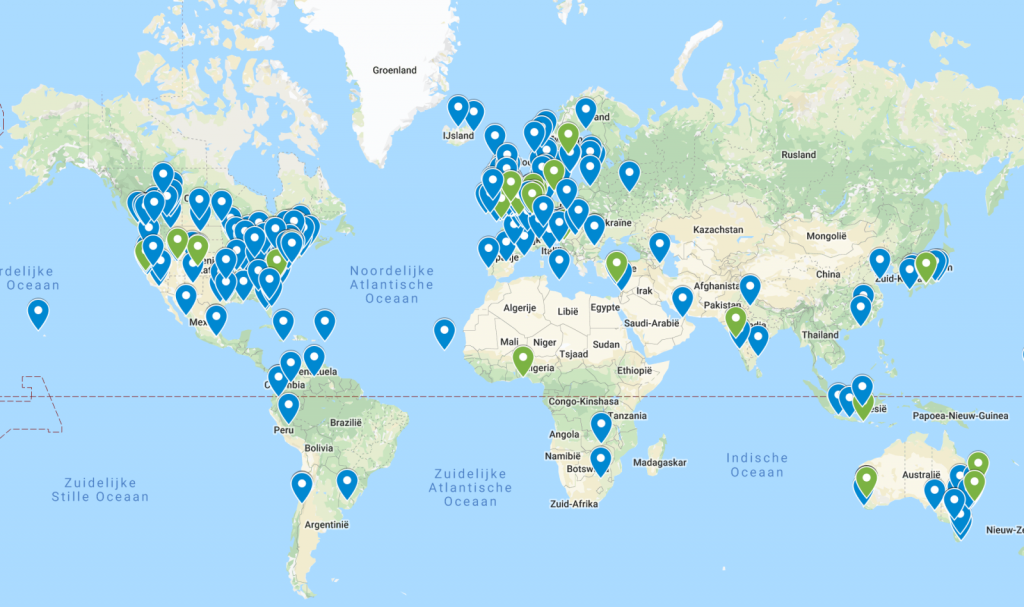 A map showing all the iStills in the world

Take automation, for example. When you visit distilleries, even new ones or especially new ones, you are often proudly told that everything is manual. There are no computers here. For van Eijk described this as “bad business covered up as romance.” He went on to say:  “We all love horses and carriages but I came here by aeroplane and taxi. It’s in the glass you beat your competition.” He compared distillers love of old equipment unfavourably with brewers: “Craft brewers are ahead of the curve,” he said. “Brewing is understood and researched. Not magic.” iStills are fully automated with a robot that takes the hearts, heads and tails, and an app that tells you where to cut depending on what you’re looking for in a spirit: “The most profound flavours come from back end tails,” he said, “Toothy rooty, nutty and earthy flavours.”

An iStill doesn’t look much like conventional still. It’s square for starters and made out of stainless steel. “Why are stills made from copper?” he asked me. “It removes sulphur caused during fermentation. Why not start with great beer or great wine without sulphur?” (Though, of course, you might want some sulphur in your spirit). iStill does, however, offer a copper ‘waffle’ to remove sulphur compounds caused by “substandard fermentations” as the website puts it. iStills are direct-fired either with electricity or gas and claim to be much more economical than a standard set up. The biggest surprise though, is that it’s possible to mash, ferment and distill all in the same vessel: “Why mash, ferment and distill in separate containers?” he said. “They all take place in a boiler and are about heating up and cooling down. My machines can do everything in one boiler.” He thinks part of the reason people go for the traditional set-up is so that suppliers can sell more equipment. 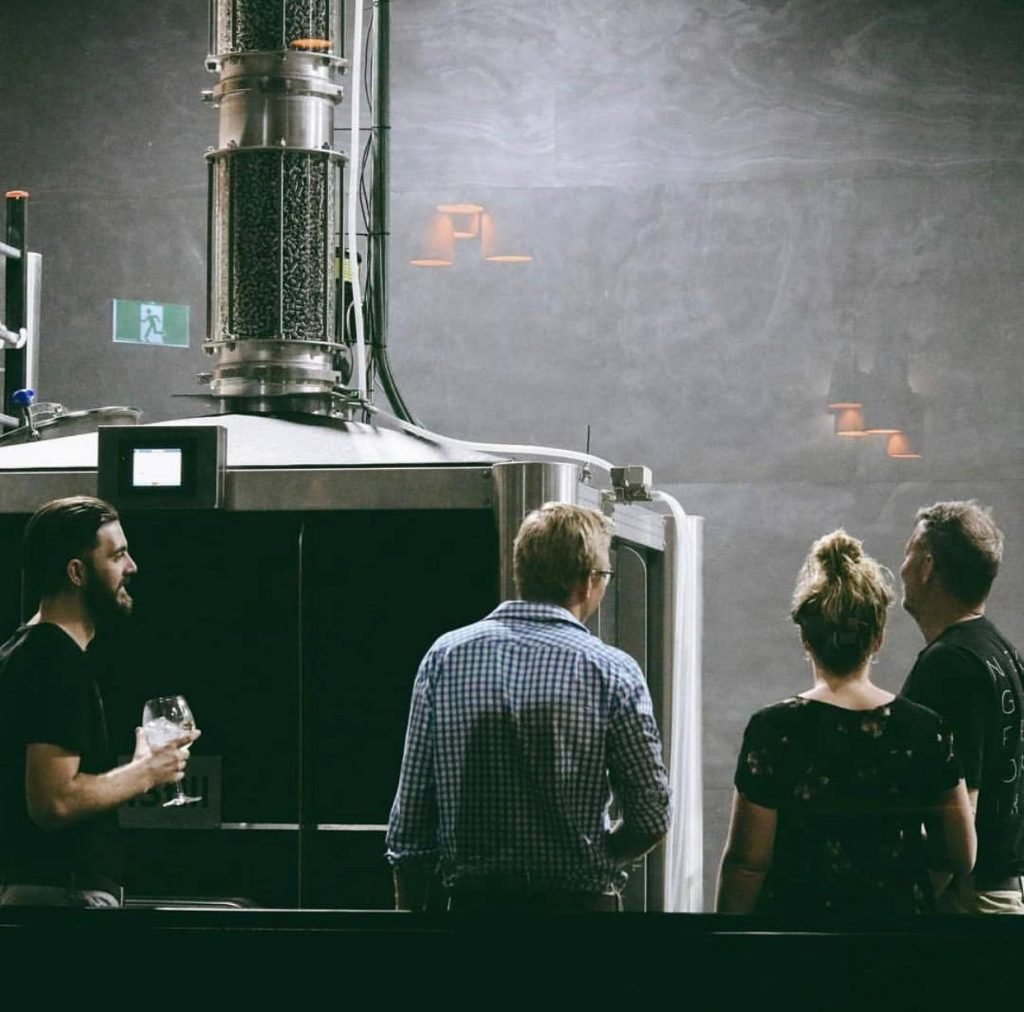 We’re not in Rothes anymore

You won’t be surprised to hear that Van Eijk has strong views about the finished product too: “Why should whisky taste like peat or sherry?” he said. “I want it to taste like grain. People in the whisky business used to say that 50% of the flavour comes from cask, now they say it is 80%. New make spirit has deteriorated in terms of the grain and procedures used in order to create as much alcohol as possible. This is worldwide. The real reason people use sherry and Port casks is to cover up spirit that has a fruity flavour deficiency.” That’s fighting talk! He’s also critical of gin: “Most gins do not have a lot of back end,” he told me. With the app, you can, according to van Eijk “see where there is a gap in flavour profile and find something that fills it out.”

“We love to bash the status quo,” he told me. This has angered some people. To answer some of his critics he took part in a challenge with a distiller in Chicago. “He had beautiful copper still costing $200k and my little still cost $10k”, he told me. To the horror of the distillery owner and (some of) the critics, Van Eijk’s little still not only distilled faster but his spirit tasted better in a blind test. That day he sold seven stills.

While van Eijk was talking, the iStill was running watched over by his silent assistant. Then at the end we got to try the result, a rum distilled with mint and lime, like a gin. Made in around half an hour. And the results, well, there wasn’t a traditionally-distilled version for comparison but it tasted pretty damn good to me. I’m going to start saving up for a iStillof my own. I think I could squeeze one into my shed.

You can find out more about how the iStill works on its YouTube page.

Master of Malt @MasterOfMalt
6 hours ago
Shake up some flashy cocktails and show off your flambé flair by mixing up a Maratini with @BrockmansGin Intensely Smooth.

Master of Malt @MasterOfMalt
6 hours ago
Try a sophisticated twist to your spritzes this summer with this combination of @ChambordLiqueur and Adami Bosco di Gica Prosecco... Berry delicious. On special offer now!

The story behind the revival of James E. Pepper Whiskey