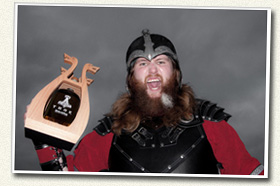 Thursday/Thorsday last week was the day the Runes foretold, their arrival marked by the noise of the door buzzer as the DHL man arrived – just like the days of yore. They spoke of the coming of something that would require valour, and bravery (check and check), though sadly due to “the way of things”, the Runes didn’t arrive daily as a lead up to Thorsday. One arrived on Tuesday, the rest, on Wednesday. It was still quite dramatic though (let’s just say it didn’t Rune the surprise), even if they did come in either a fake felt pouch or a mauve mesh-bag-thing that a small girl would keep her jewellery in.

This is what arrived today: (a medium-sized black box with a bow, see below – nice to have a bow)

Within it were a letter, the final rune, another tiny scroll and a sample bottle!

The letter was really long, but quite interesting and went into a little detail about Thor. Just who was this Thor? Well, he was a “powerful and brooding figure”. He also had a hammer, which was his tool/weapon of choice. If anything needed doing, Thor would use his hammer. If you wanted to build something, Thor would find some nails and start hammering them. If you wanted to demolish a wall… …you guessed it… Thor and his hammer.

“Thor, we’re moving flat on Saturday, can you help?”

“Can I bring Mjolnir, my beloved hammer?”

“No Thor, please don’t. After what you did to that trellis I’d really rather you didn’t.”

By all accounts, that was Thor all over.

We unravelled the tiny scroll that arrived with the rune and sample, and within it was written:

“You have faced the wrath of Thor: The time has come to accept your reward. Celebrate Thorsday.”

We didn’t need telling twice. It was celebration time, though sadly I had to wait to do this post because I was doing some silly detox diet (it involved a lot of celery, some clay stuff, and near-constant weeping – also quite a lot of chiding from Ben). I’m finally off it and back on the coffee and booze like Charles Bukowski looking for inspiration, and so I can now taste what promises to be one of the best scotch whiskies so far this year…

A beacon of healthy living.

A quick note, upon opening the sample we noted the seal on the bottle was made with PTFE tape. I guess if it’s good enough for plumbing and gas fittings it’s good enough for us. Sadly, however, the inside of the bottle cap had a weird, plasticised cardboard disc in it and it became apparent that the whisky inside had been tainted, and had a weird chemical aroma. (If only there was some kind of whisky sample service they could have used!?)

We sent to the warehouse for a full bottle of Highland Park Thor to do a proper set of tasting notes, and can duly confirm the chemical aroma was only present in the sample bottle. All is well, and so here goes:

Nose: Immediately sweet and fruity – quite tangy, like freshly peeled Bramley apples, Demerara sugar, butterscotch and thick malt. Hints of vanilla, black pepper and warm pastries. As it oxidises in the glass, it becomes more and more coastal, with hints of old ropes and sea spray. Maybe just a touch of cedarwood.

Palate: Very fruity, intense palate entry. Like a boiled down mix of lemon drops, malt, super-oaky Chardonnay and runny honey. A little salty butter and savoury crackers too, or maybe a really tangy Stilton. A touch of port jelly and intense, freshly grated cinnamon (that heady mix of heat and sweetness).

Winner of the Glen Grant 60yo Joke Competition...