Today we’re toasting the start of a new week with a very rare single pot still Jamaican from a distillery that even some rum aficionados have never heard of, New Yarmouth.

Can you name a Jamaican distillery? The one that would get the highest score (and therefore lose) on Pointless is Appleton Estate. Not only does it produce superb rum, but what it does produce is marketed under its own well-promoted brand name with a highly-recognisable master blender in Joy Spence. After that, it becomes a bit harder as most distilleries in Jamaica produce rum of all different types to go into blends that might contain products of more than one country. It’s only recently that these single distillery rums have become highly-prized and bottled separately like single malt whisky. The next best known is probably Hampden Estate, which now bottles under its own brand name. Then there’s Clarendon and Long Pond, revered among rum lovers when independently bottled but without any brand presence outside of serious rum geeks.

Right at the bottom of this name-recognition ranking, the one that would win at Pointless, must surely be New Yarmouth. No, not a resort in Suffolk but a distillery in Clarendon Parish to the west of Kingston. It deserves to be better known as it’s the home of that Jamaican icon, J. Wray & Nephew overproof rum, and is in the same stable as Appleton, under the Campari umbrella. If you can imagine a vast stable under a giant umbrella. Mixing my metaphors a bit there. Anyway, New Yarmouth produces both pot and column still rums, J. Wray & Nephew is an unaged blend of the two. It also produces aged rums for blends. Which brings us on to this New Arrival of the Week.

It’s 100% pot still, distilled in June 2005 and poured into ex-bourbon barrels. It spent just under seven years ageing in Jamaica before in May 2012 being shipped to England in cask, and then to Denmark in December 2017 before bottling in October 2020. Only 255 bottles were filled. It’s usually said that one year in Jamaica is worth three in Scotland, so having spent nearly seven years on the island with a further eight in Europe, this is a very well-aged rum.

What you’ll notice as soon as you open the bottle is the extraordinarily high level of ester. These are the flavoursome compounds created mainly during fermentation but also formed by distillation and ageing. The best-known ones are ethyl propionate (smells like pineapple), ethyl acetate (nail polish), amyl acetate (bananas) and ethyl butyrate (more pineapple). Esters are measured in ppm (parts per million); J. Wray & Nephew, quite a funky rum, has a ppm of around 200. Anything above 500 ppm is considered seriously intense; this New Yarmouth has 1300. 1300! That’s funky as hell. Rum nerds will be interested to know that the marque, a designation showing the style of rum for blenders, is a NYE/ WM, the second highest ester count produced by the distillery. Rums of this intensity are what’s known as continental flavour. I remember someone from rum bottler Velier explaining that they were originally produced to get around the high duty on importing spirits into Germany. You would only need a tiny amount of continental flavour rum to provide character to German neutral spirits. 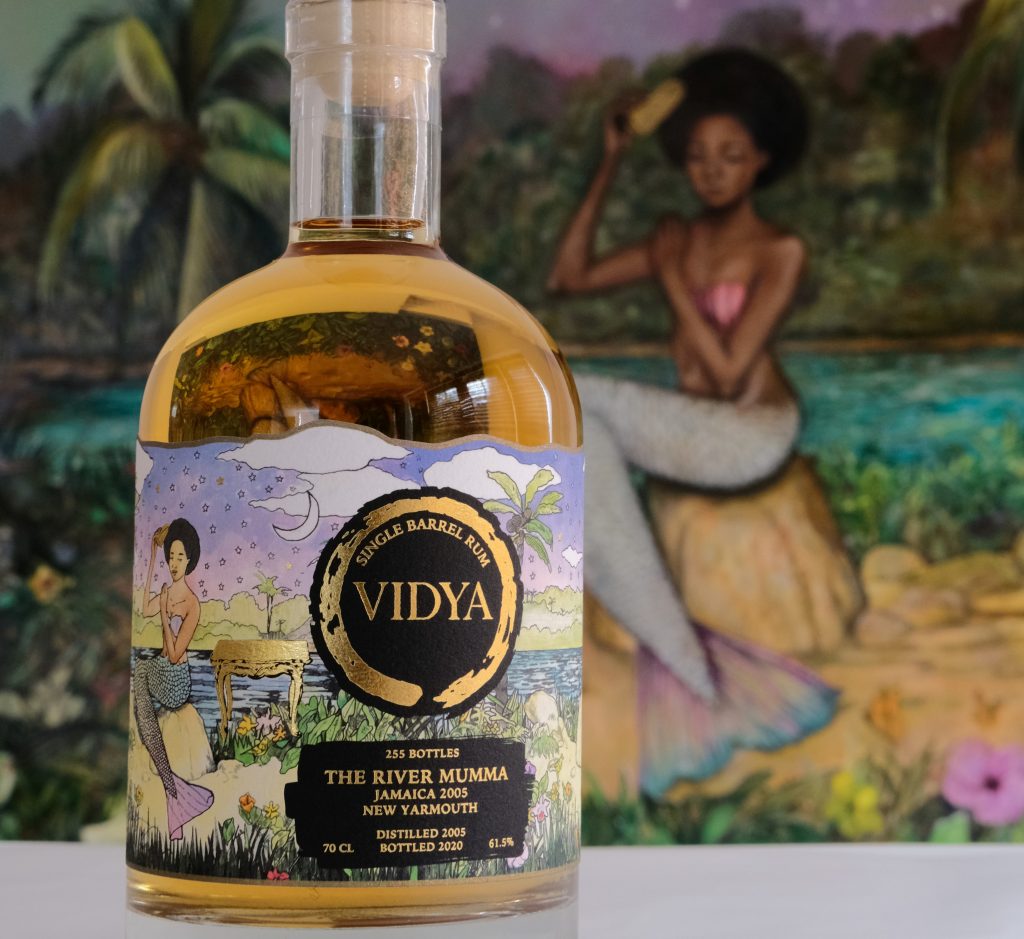 The snazzy label is by Aaron Godwin-Lamptey

They weren’t really designed to be drunk on their own. And yet, they are magnificent creatures, if not for the faint-hearted. This one is bottled by a British company that specialises in rare rums called Vidya, which apparently comes from a Sanskrit word meaning clarity, knowledge and learning. What this has to do with rum, we have no idea. The rum’s name makes a bit more sense. In Jamaican legend, the River Mumma was a mermaid-like creature who guarded the river and would lure people to their doom. You have been warned! The striking label is by British artist Aaron Godwin-Lamptey.

All great stuff, but it’s the contents of the bottle that we think you’ll be most interested in (see tasting note below). It’s bottled at cask strength too, 61.5% ABV, so it’s big in every sense of the word. We think this is one of the most exciting New Arrivals we’ve had all year.

Tasting note from the hep cats at Vidya

New Yarmouth 2005 – The River Mumma (Vidya) is available from Master of Malt.

Christmas gifts we'd love to find under the tree!