We had the honour of an audience with the queen of rum, Joy Spence from Appleton Estate. We talked about Jamaican rum’s Geographical Indication, whether she might ever launch a single pot still spirit (please!), and why when she became master blender some people thought her parents owned the company.

Last month four of the most eminent names in global distilling were at Carlton House Terrace in London for Gruppo’s Campari’s Meet the Masters event. The big four were Eddie Russell of Wild Turkey Bourbon, Patrick Raguenaud of Grand Marnier, Dennis Malcolm of Glen Grant and Joy Spence from Appleton Estate in Jamaica. 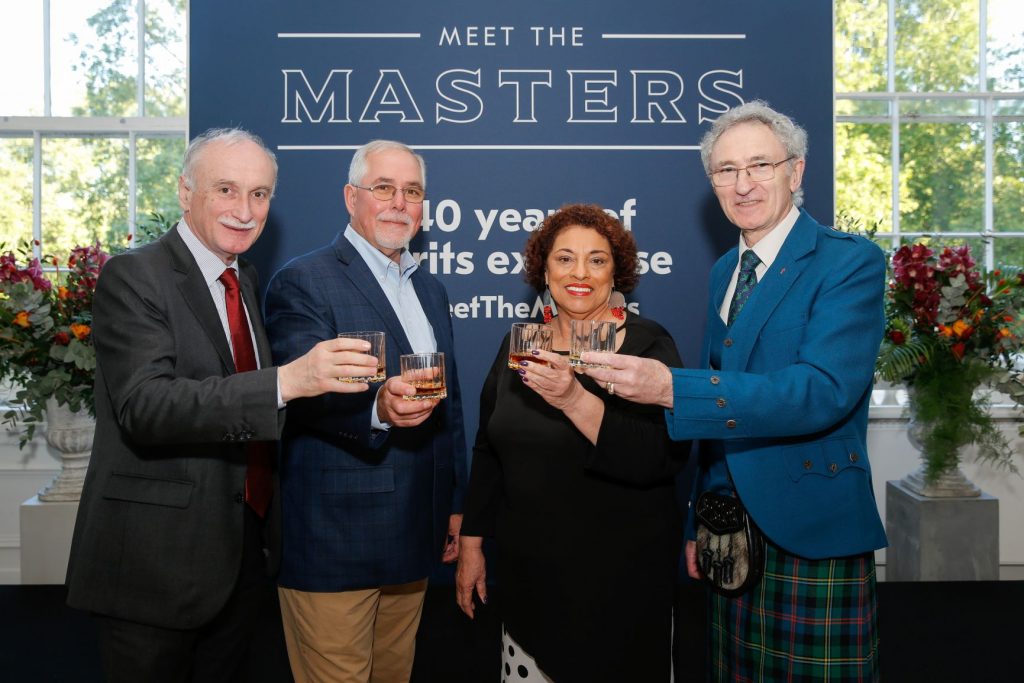 The fab four, from left: Raguenaud, Russell, Spence and Malcolm

For rum lovers, Joy Spence needs no introduction, but we’re going to give her one anyway. Spence trained as a chemist and did her masters at Loughborough University in England. She joined J. Wray and Nephew, Appleton’s parent company, in 1981. She held a number of positions before becoming chief blender in 1997. The first woman ever to hold this position.

Appleton is one of the oldest names in rum. The first mention of the estate producing rum is from 1749. In 1916 it was acquired by the J. Wray and Nephew, who make Jamaica’s number one rum, and in 2012 both brands were bought by Campari. Appleton has been instrumental in taking rum upmarket with its excellent age statement range like the exceptional 25 year old Joy Anniversary Blend (bottled to honour Spence’s 20 years as master blender). 2018 was a big year for Appleton as it opened a £5.4m visitor centre called, naturally, The Joy Spence Experience, and Jamaican rum’s Geographical Indication was approved which means that it has protected status like Champagne or Stilton. To learn more, we spoke to the lady herself, Joy Spence:

Master of Malt: How important is the GI for Jamaican rum?

Joy Spence: I think the GI for Jamaican rum is extremely important because what is happening globally is that a lot of producers outside of Jamaica are purchasing Jamaica rum but diluting it but still declaring it as a hundred percent Jamaican rum. So we set up some key characteristics for Jamaica rum: first you must use limestone-filtered water in your fermentation, Jamaican limestone-filtered water to be precise! You must ferment and distill in Jamaica. If you’re going to have an age statement it must be the minimum age system, similar to the Scotch whisky system. And last but not least, no additives in Jamaica rum.

MoM: And do you think other countries will follow you? Because some countries have slightly less clear labelling systems?

JS: Yes. Actually Barbados is now working on a GI for Barbados rum and I think others will follow suit because they see the importance of having a geographical indicator and protecting your turf. Unfortunately it’s not an even playing field in the rum industry, because you have so many different regulations from different countries, so it’s not quite clear exactly what an overall definition for rum is and what is allowed and what is not allowed. This is why we have decided to clarify what Jamaica rum is all about so they know exactly what they’re getting when they purchase a bottle of Jamaica rum.

MoM: Does all the sugarcane used in your rum come from the estate?

JS: Yes we grow over 4,000 hectares of sugarcane at Appleton, so we’re one of the few producers that can claim the process from the cane to the cocktail, where we have total control of our process.

MoM: What about yeast?

JS: We have a special strain that was handed down from the inception of rum making at Appleton so we generate a strain every three months to keep it pure. We ferment for between 36 or 48 hours and at the end of that we have fermented molasses that has 7% alcohol in it.

MoM: And that’s quite a fast fermentation for Jamaica, is that right?

JS: You have two methods of fermenting in Jamaica but this particular method represent 90% of the production in Jamaica. And we don’t use dunder in the Appleton process, those are for high ester rums. We’re looking to make smooth, rich, complex, and fruity spirits. 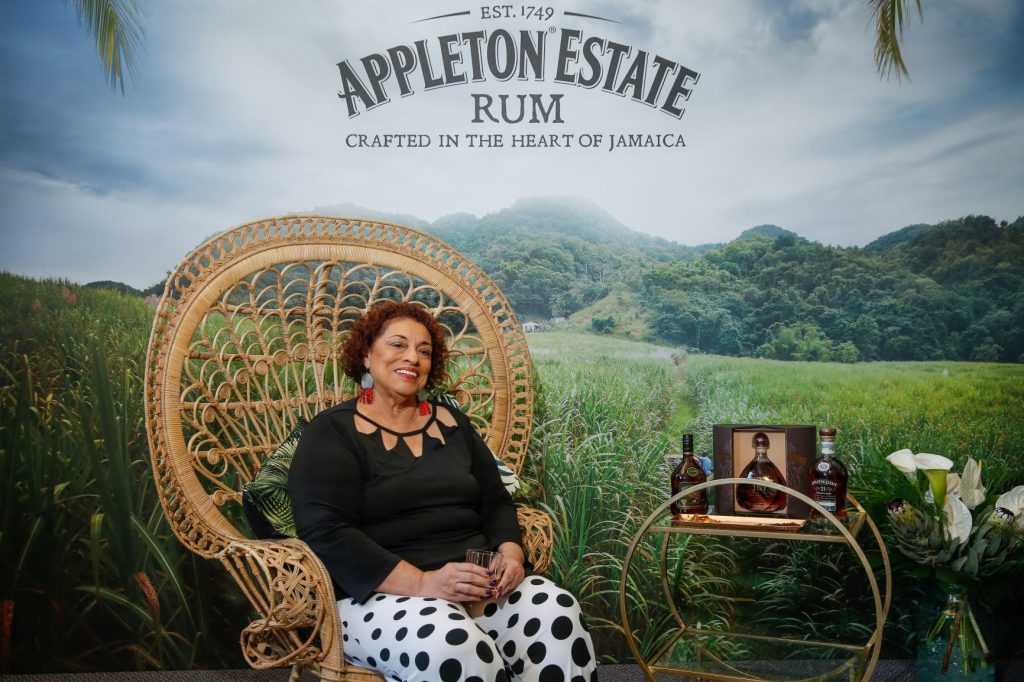 Spence brought Jamaica to London with her

MoM: And can you tell me a little about the distillation. What sort of stills do you use?

JS: We use a combination of both pot and column in all of our blends. The pot still however is the heart and soul of our blends and our copper pot stills are specially designed in Scotland for us and so they produce this distinctive orange peel top note, which is the hallmark of the Appleton Estate range.

MoM: I know you’ve done some single cask releases but would you ever do a single pot still release?

JS: Eventually. Right now because we have so much aged stock, I am releasing limited time offerings of blends but eventually we will look forward to a single mark. But not just yet because we have quite a few products in the pipeline coming out. We plan to launch one every year.

MoM: That’s really exciting! Do you think the future of rum is to go upmarket?

JS: Yes, I think the rum consumer is looking for more sophistication, and genuine stories, a lot of the rum producers really don’t have a lot to say about their story. Appleton has genuine provenance and a huge story behind it. Premium aged rum category is now the hot category and it is going to be the next whisky.

MoM: At the moment whisky is trying to be less serious, do you think there’s a danger with rum becoming more serious that it might lose some of its sense of fun?

JS: At Appleton Estate, we make a rum for any occasion. So, we make rums that are great for fun parties and rums that are for a more serious, sophisticated setting. What we do is to try to cover both ends of the spirits category.

MoM: Can you tell me a little bit about how you became the master blender at Appleton?

JS: I joined the company as a chief chemist in 1981 and then I started working with the previous master blender and then I became so fascinated with the art of blending; being able to use my sensory skills to create all these beautiful flavour profiles. And he recognised that I had great creativity. So he took me under his wings, tutored with him for 17 years and then when he retired, I was appointed the first female master blender in the spirits industry. It was a male-dominated industry – no woman had ever been made master blender. And some persons were sceptical, people thought that my parents owned the company and that’s how I got the position! And not the fact that I really earned it through expertise. But eventually people understood that I’d worked for several years in the industry and became quite an expert. 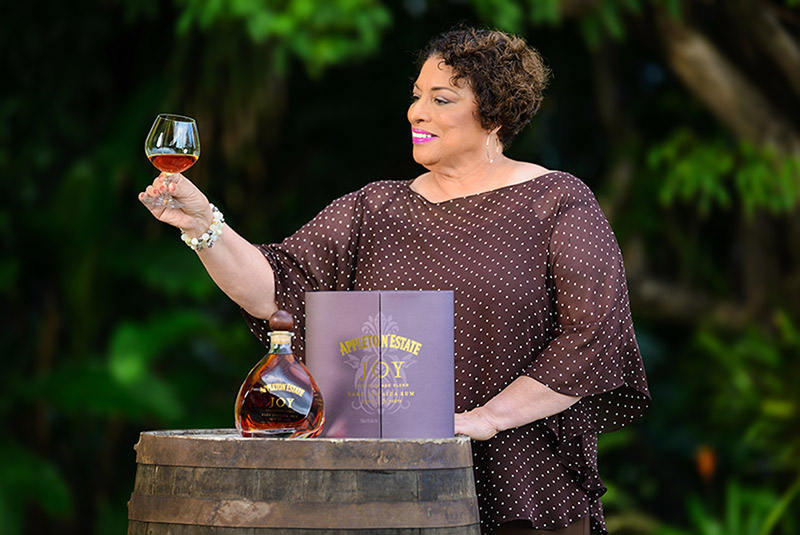 MoM: What do you think the biggest skill that a blender has to have?

JS: People think that the biggest skill that a blender should have is being able to taste but no! It’s your sensory skills. Because we can differentiate much more by nosing than by tasting. Because the taste buds really get shattered after about three or four drinks. And when you’re doing sensory analysis you can smell and differentiate for hours the different aromas. And so this is the most important part of being a blender in the rum industry. Sensory analysis is based on memory so you memorise each aroma and it stays right there. There’s a little lobe right at the front here where you store everything for sensory analysis. And so I can differentiate over 200 aromas right now.

MoM: Do you have a favourite? I know it’s difficult, like choosing your children, but at the end of a hard day which Appleton do you reach for?

JS: I think my favourite blend to date is the Appleton Estate Joy Anniversary Blend. It is really the hallmark of excellence.

MoM: Do you have a favourite rum cocktail?

JS: I like simple cocktails. And I find that a Daiquiri with Appleton Estate Reserve, using brown sugar with a few drops of Angostura bitters, is quite delicious, simple and easy to make.

MoM: And then finally, what’s new on the horizon?

JS: Well we just launched Appleton Estate 30 year old for this year. And we are going to be releasing a product before the end of the year at the Joy Spence Appleton Estate Rum Experience – that was specifically made for the Experience and so it won’t be sold anywhere else in the world, so you have to come to the Experience in Jamaica to actually purchase it.

We are so there!