We got a chance to go to Dublin this week to try the oldest permanent Redbreast expression ever released: Redbreast 27 Year Old Irish Whiskey.

We travelled to the Irish capital this week in the company of Midleton Distillery master blender Billy Leighton, blender Dave McCabe and head of maturation Kevin O’Gorman to launch the most exciting whiskey to come out of the distillery in about a fortnight. All jokes aside, it’s new Redbreast, folks. It’s 27 years old, it’s bottled at a cask strength 54.6% ABV and it’s joining the core range, making the oldest permanent expression from the brand.

It’s an impressive showing from the distillery in a week in which we celebrated Irish Whiskey Day (3 March), chosen because of Ireland’s connection to the number, from the leaves on a shamrock to the colours in the flag and the three types of Irish whiskey: single malt, single grain and single pot still. The latter is a source of particular pride as it can only be made in Ireland. For those unfamiliar with the style, it’s made from a mix of malted and unmalted barley, in contrast to single malt whiskeys which use 100% malted barley, which provides a creamy and spicy character to the spirit.

Redbreast is the biggest-selling pot still whiskey globally and never seems to stop winning awards, notably taking home the prize for World Whisky Trophy at the International Wine and Spirit Competition in 2019 for Redbreast 12 Year Old, which scored a remarkable 98 points. Although, it may well have competition next year from the latest release, which joins the 15, and 21-year-old whiskies in the Redbreast range, as well as the Lustau Edition. 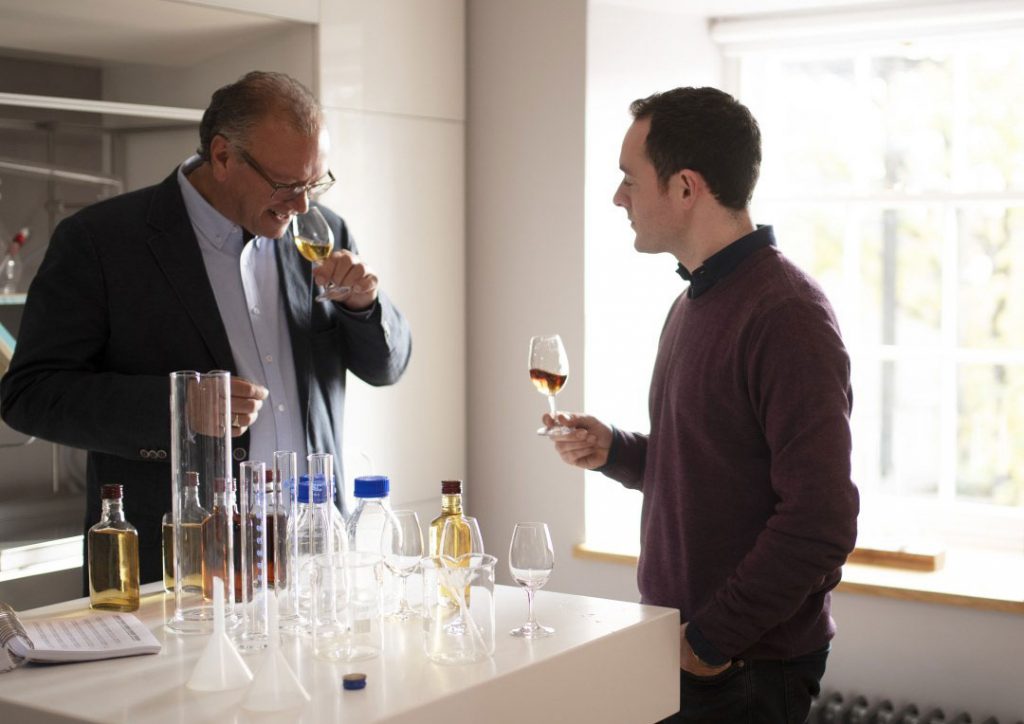 Redbreast 27 Year Old, which will be made in “limited quantities on an ongoing basis” and is priced at RRP €495, marks something of a departure from the rest of the range in that it was partially matured in ruby Port barrels. Leighton made it clear at the launch event that it’s a single pot still whiskey made in in the Redbreast style. “On the label, it says ‘enriched by ruby Port casks. I want to make it clear it’s not a Port cask finish, it’s a component,” he says. “Rewind back to 1995 we got some freshly seasoned Port casks and we put a six-year-old single pot still into those casks. What we have here is a combination of four cask types: first-still bourbon and refill bourbon, first-fill oloroso sherry casks and first-fill ruby Port pipes”.

On the brand’s website, there’s a comment that reads, “The sherry flavour profile of our Redbreast whiskey is perhaps the most beloved part of our whiskey for many of our loyal followers”, so it is interesting to see Redbreast flexing its maturation muscles. Fans may be concerned that the classic profile may be lost in this experimentation. In the press release, Leighton says that McCabe and he “Drew on our experience of working with sherry and other wine casks over the years as we have evolved the range. This time, we wanted to push the boundaries and yet create an expression that would seamlessly take its place at the head of the family,” while McCabe added that the ruby Port barrels “contribute notes of mango, pineapple and berry to the robust flavour of Redbreast 27 Year Old, clearly distinguishing it from the previous expressions in the collection, treading a beautiful balance of tradition and innovation.”

It’s worth noting that, while consumers have seen little evidence of this until now, Irish Distillers relationship with Port goes back almost as far as it does with oloroso sherry. It started over 30 years ago, in the late ’80s. Having already established contacts and a supply line for oloroso sherry casks from Jerez de la Frontera, O’Gorman said that “the challenge was to get something different. My predecessor Brendan Monks came up with the idea of going to Portugal”. Irish Distillers was put in contact with the people at Sandeman Port, who at first were a little resistant. The relationship grew, particularly thanks to Alex Burmester, who worked for Sandeman at the time and was also present at the event. He no longer works for Sandeman, but still helps Irish Distillers operate in the world of Port. 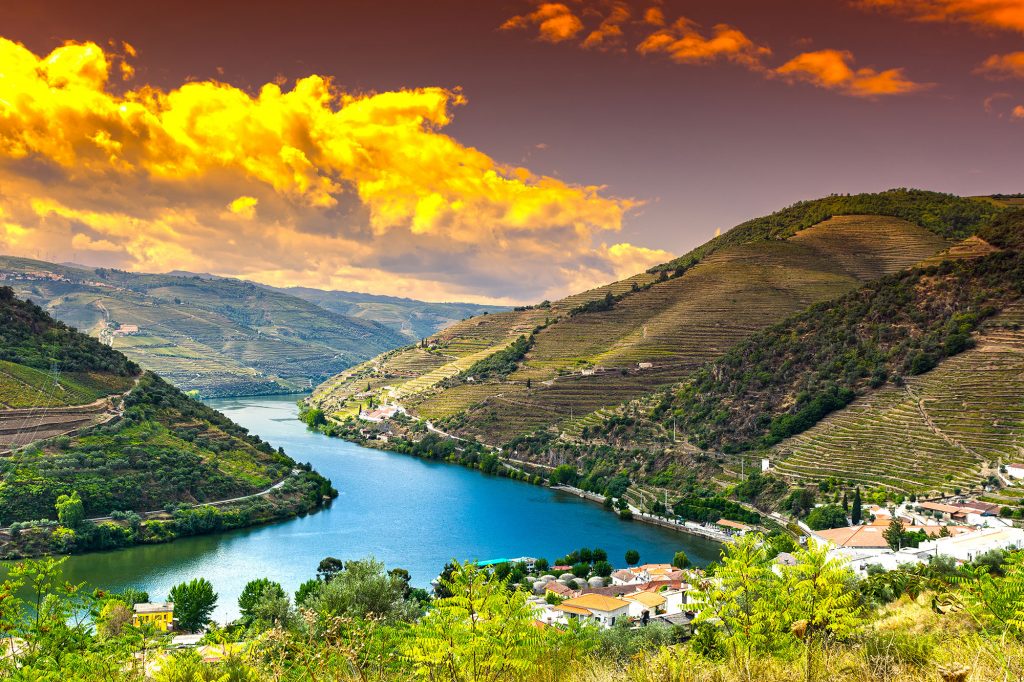 Once it had established a supply of Port, Irish Distillers then got in contact with the Tacopal cooperage, which has worked with oak for more than a century, to obtain casks. Today, Irish Distillers now imports between 40-60 European oak 500 litre port pipes annually. The wood is medium-toasted and seasoned with red wine for approximately 12 months before ruby Port is added for approximately 12 months. O’Gorman explained that the process was a response to “the challenge of seasoning Port. If you put it into a virgin oak cask, you’re going to get a major wood contribution. One of the techniques we figured out right from the start was that we needed to take some of these tannins and wood compounds out from the start,” O’Gorman explains. Overall it’s a two-year process for Irish Distillers.

The Port is emptied and the pipes are sent over to Cork. “Our friends back in Portugal get a good deal as they get to keep the Port,” O’Gorman explains. “The casks are then inspected at Midleton. We nose them to make sure the aromas and flavours are perfect and then they’re filled with our whiskey to sleep for many years”. If you want a good idea of what Midleton distilled whiskey matured exclusively in the Ruby Port pipe tastes like then all you have to do is get your hands on Midleton Method and Madness Single Pot Still 28 Year Old, because that’s the closest you’ll likely get.

This long-standing relationship with Port demonstrates that Redbreast 27 Year Old is not the brainchild of a marketing department trying to stir-up some intrigue. The truth is, the addition of the Port cask doesn’t compromise the Redbreast character. Instead, it compliments it beautifully. Redbreast 27 Year Old is every bit as impressive as it needs to be. How fruity, ripe and almost youthful it is in parts despite its age and considerable cask influence is remarkable. 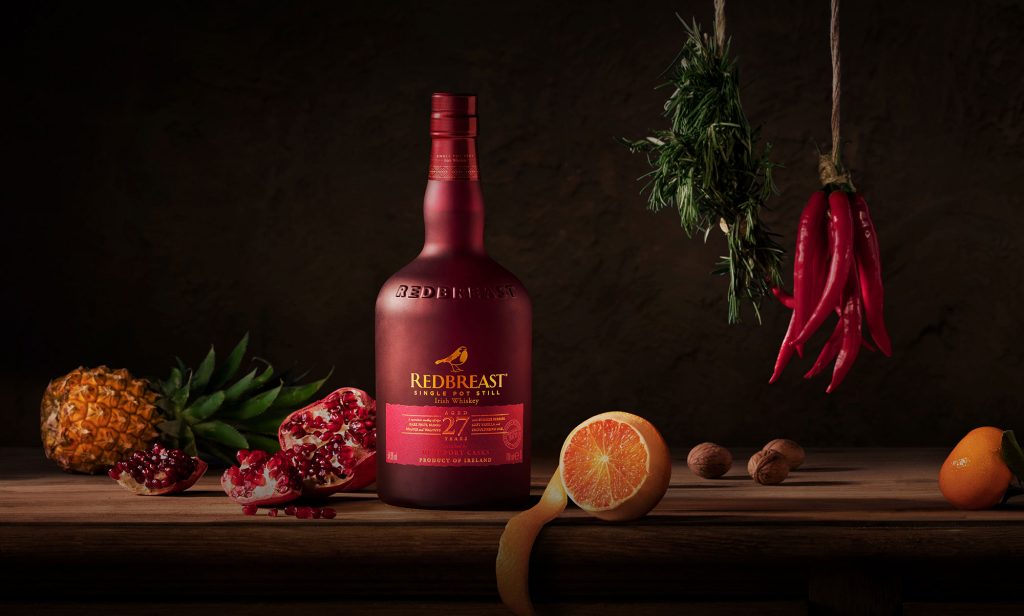 “This is traditional Irish pot-still at its richest: well matured and with a generous slug of sherry. For some lovers of this style, Redbreast approaches perfection,” famed whiskey author Michael Jackson once wrote. This event revealed why Redbreast can be that good. It’s a testament to the power of great blenders understanding how to utilise great casks. At the event, Leighton talked at length about how much time, money and effort he and his team spend on casks and how much their role is defined by handpicking the right ones. I can confirm they’re on the money here.

Nose: The ex-bourbon cask influence emerges first with a layer of earthy vanilla, desiccated coconut and toffee before a tropical fruit note emerge – mango and pineapple mostly – which is to be expected from well-aged Midleton distillate. In the backdrop, there’s ripe orange citrus, candied walnuts and a touch of oloroso sherry sharpness. Stewed plums, figs and ripe red apples add a rich and fruity undertone.

Palate: The array of dark and red fruits is beautiful, with black cherries, cranberry juice, blackcurrant compote, prunes and nectarines all present. Old leather, peppermint and a little grapefruit tartness develop among more tropical elements of guava and caramelised banana. Charred red chillies bring an earthy warmth which is complemented by exotic spices and a lick of manuka honey.

Finish: The notes from the palate stay for what feels like an age (a very pleasant age). The impressive and long finish has all the complex fruity notes that have defined this dram, as well as nutty antique wood, aromatic nutmeg, a handful of fresh herbs and the slightest hint of wasabi heat.

Overall: The vibrancy of those fruit notes are astonishing and the star of the show. Redbreast 27 Year Old is a beauty and does not disappoint.

The Whisky Baron: life as an independent bottler