Islay’s eighth distillery Kilchoman has doubled its production capacity with a new stillhouse extension that opened this week. We managed to grab a quick chat with founder Anthony Wills about the effect the improvements will have, how he replicated the Kilchoman character and why legacy is key.

On Friday 21st February, family, friends, colleagues and local businesses gathered at Kilchoman Distillery on Islay to celebrate the opening of its new stillhouse and visitor centre. Unfortunately, terrible weather meant that we couldn’t be there in person, but over 150 guests did manage to witness the new developments, which began in 2018 with the completion of a new malt floor and kiln. These founder Anthony Wills says have allowed the distillery to malt twice as much of its own barley. “We’ve gone from four-tonne batches instead of two. In future, this will allow us to share more of our flagship expression, Kilchoman 100% Islay”.

The £6 million project entailed creating a new stillhouse by extending out from the gable end of the original. It contains two new stills, a new mash tun and six additional stainless steel washbacks which doubles the capacity to 480,000 litres of pure alcohol annually, though the distillery has not yet decided what production level it will settle at. 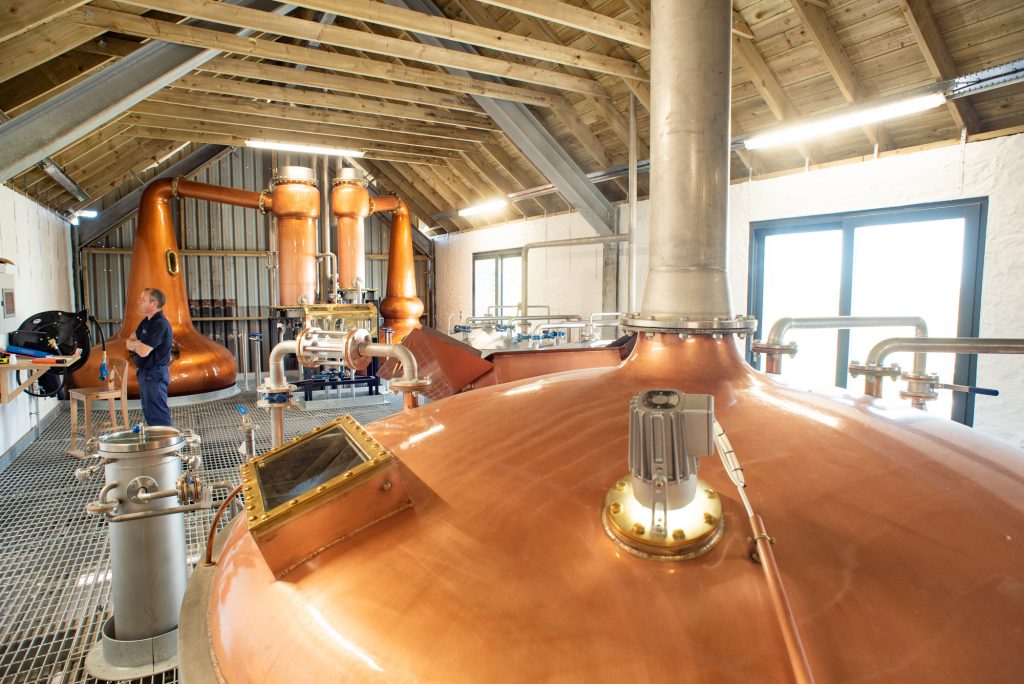 The new stillhouse in all its glory

The new stillhouse had become a necessity in recent times due to the continued increase in demand for Kilchoman. Without an increase in capacity, Wills says, Kilchoman would be heading towards a situation where its whisky would be sold purely on allocation. “We wanted to continue building on the success of the last 15 years without the risk of running out of whisky. I’m a great believer that if you are standing still in business you are going backwards,” he explains. “With my three sons very much part of the business, I wanted to make sure we had enough Kilchoman single malt to share with consumers around the world. In the first 10 years, we had proved that Kilchoman had a following and I didn’t want to be in the position of allocating our single malt going forward”.

The investment amounts to almost an entirely new distillery in itself, however, Kilchoman was keen that the new equipment was a mirror image of the original stillhouse to ensure that signature Kilchoman character and strong island provenance was retained. “I spoke to Jim Swan before he sadly died and he was adamant that the only way not to compromise on the character and style of our new spirit was to build a replica of what we had before,” says Wills. “So we set about copying all the production equipment we started with in 2005. Two more stills, a mash tun and six new washbacks. This was the only way we were going to get exactly the same spirit character.”

One particularly exciting aspect of this development for nerdy whisky fans (our people) is that the new equipment will allow more experimentation during the malting and peating phases. “With the new production up and running we have started experimenting with sowing different barley varieties on the farm, processing unpeated, lightly-peated and heavily-peated malt, using different yeast varieties, different spirit cut points and isolating the spirit from each different run,” Wills explains. “We are excited to see how it affects the character of the spirit and I’m especially interested in the way different yeast varieties affect the character of the spirit”. 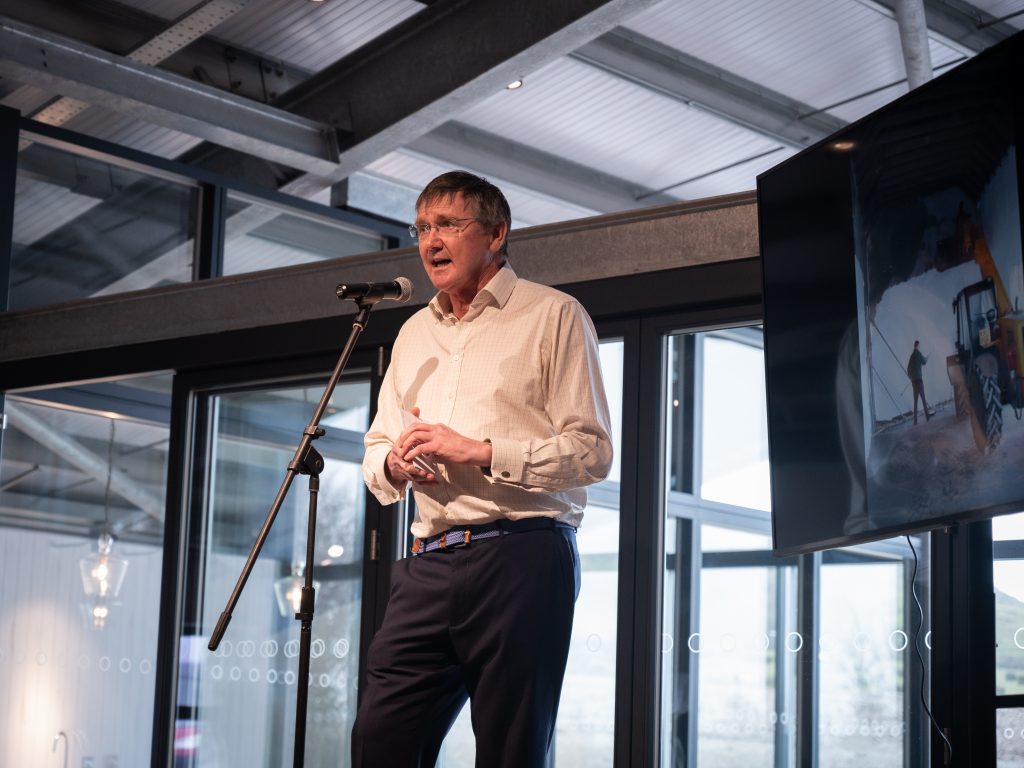 Two more bonded warehouses have also been built to allow greater room for cask maturation. The distillery has had to rely on using space in predominantly dunnage warehouses owned by Bruichladdich, Bowmore and Port Ellen, but Wills confirms that Kilchoman will continue to build more warehousing as demand dictates, commenting “I want to mature all our stock on Islay. This is important to our USP”.

The final phase of the current expansion project has been the completion of a new open-plan visitor centre that encompasses a shop area selling whisky and branded goods, glass windowed tasting rooms, a bar to enjoy your drams around a log burning stove and a café. In 2019 Kilchoman Distillery welcomed some 30,000 visitors and each year this number is rising, which is why Wills felt it was important for the distillery to have space to accommodate the increasing number of people making the trip. ““We needed to create a better experience for our visitors so we decided to build a purpose-built building behind the café,” he says. “We are very happy with the end result as we’ve managed to retain many of the original features of the stables. The new visitor centre will be open 7 days a week from the end of March so make sure to come and visit us soon!”

The developments couldn’t have come at a better time as far as Wills is concerned. “He believes the future of whisky and especially Islay malt is very positive. The category is still seeing growth and we are confident this will continue,” Wills says. “However, the recently implemented tariffs in the USA and coronavirus will present its challenges. I’m delighted we launched Kilchoman 15 years ago when very few new distilleries were being opened. The challenges are much greater for all the distilleries around the world that have recently started. 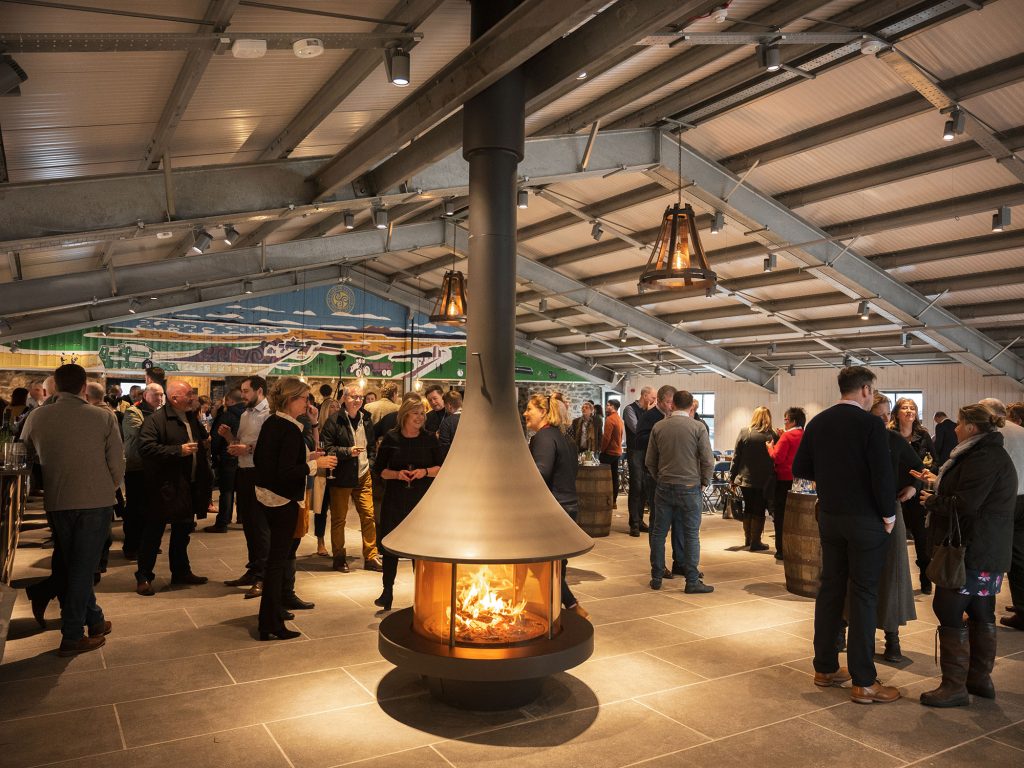 Guests enjoyed the new visitor centre at the opening event

Wills had mentioned in the press release that these changes came at a time when he thought he might take a step back. It’s notable that these developments have taken place as his sons take on a greater role and the family presence increases. “The big thing for myself and my wife was about leaving a legacy for my sons to take to the next level. I believe family-run businesses have more of a connection with their customer base and I would like to see Kilchoman growing as a family business well into the future,” Wills explains. “Kilchoman was always about growing a business and leaving a legacy to my three sons to take on when I eventually step back….that isn’t happening anytime soon!”

Master of Malt @MasterOfMalt
20 hours ago
A terrific single malt from @TheBalvenie. This Speysider was finished in casks which previously held Caribbean rum, imparting extra sweetness and warmth to the whisky. The fabulous result is a well-rounded whisky with notes of toffee, fruit and vanilla.

Master of Malt @MasterOfMalt
21 hours ago
With #NationalRumDay coming up on Saturday 9 July, we are making one of the oldest cocktails out there, the Rum Punch with funky Dunderhead rum.

Everything you wanted to know about peat