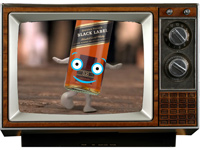 Something of a rarity this – a joint blog post! Jake and Sam are proud to present our top whisky appearances on the big and small screen.

So, with Blur’s new album still relatively fresh off the press, we give you Whisky & TV! (You know, like Coffee & TV… Geddit?)

Sam: If you’re going to call it that, I’m going to make my own list.

Jake: Fine, after you then. I didn’t want any of your suggestions in my (super-fun-better-than-Sam’s) list anyway.

Hi. I’m Sam Smith. You might remember me from tangentially-whisky related blogs such as ‘The Importance of Cats in the Workplace (Specifically in Distilleries)‘ and that one with the MS Paint thing. Welcome to my part of the post where I list what I think are the coolest references to whisk(e)y in TV and movies. While reading, please be aware that this is my opinion and I may have missed out on some very well known whisky references, like Lost in Translation, Breaking Bad and whatever James Bond movie Jake probably knows all the words to.

Because these are cooler. Enjoy.

I only vaguely remember watching this odd Keanu Reeves film at like 2 in the morning about 7 years ago, so please excuse me if I don’t quite have all the film’s details down. Basically, Bill from Bill & Ted is old now and also an exorcist and he’s dead maybe? I don’t think he can travel through time any more. Shia LaBeouf is there too. Anyway, at some point, Neo can be seen enjoying a dram of Ardbeg 10 Year Old!

In an episode of Frasier, Roz enjoys some Glenfarclas 25 Year Old after finding out some troubling information. Well, I say “some” – it’s a pretty full glass of Glenfarclas 25. Also, I say “enjoys” – she actually decides that she doesn’t really need a drink in the end and throws it down the sink. Watching that happen is a bit like watching your fancy-pants smartphone slip out of your ham-handed grip and plummet to the pavement. It sort of hurts. 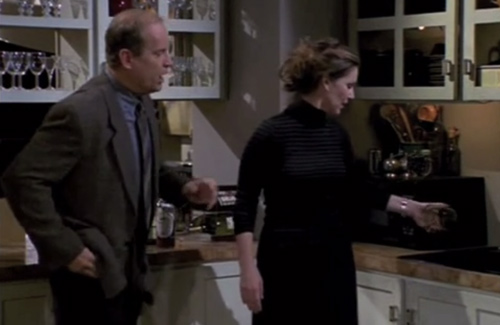 But I don’t know what to do with that tossed Glenfarclas and scrambled eggs. They’re callin’ again.

Right, so I’m only halfway through House of Cards, and I still can’t tell if the main character, Frank Underwood (played by Kevin Spacey), is a good guy or not. I don’t know what it is, he just seems kind of mean. On the other hand, he likes videogames and Blanton’s Single Barrel, which are two things I rather like as well. Conundrum. 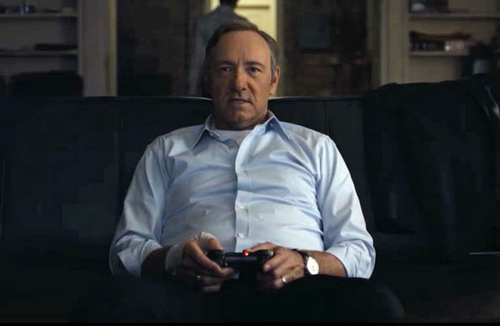 As a big dumb nerd, it was fairly obvious that I was going to include The Wolverine on this list. The 2013 film looks at Wolverine’s history in Japan, which is a cool part of his back story, so of course he drinks some Japanese whisky on a plane. He’s got a penchant for the tasty Hibiki 17 Year Old, it seems. He’s also grown a lumberjack beard, eschewing his trademark mutton chops for a short while, which is pretty neat.

1. Bullet To The Head

In a scene in Bullet To The Head, Sylvester Stallone (playing a character called Bobo – Yes, Bobo) walks into a bar and asks for a rocks glass. The bartender gets all pouty with Bobo and says he can’t bring in his own bottle into the bar. Bobo asks if they carry Bulleit Bourbon – the bartender replies that they don’t. Bobo mumbles “Yeah, well I do,” and plonks a bottle of Bulleit on the bar. Get it? Bulleit Bourbon – like the name of the film, Bullet To The Head! It’s like when people say “The Matrix” in The Matrix. 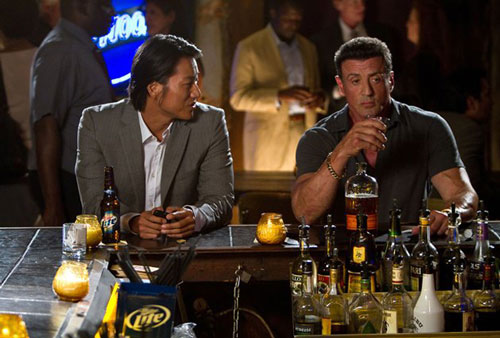 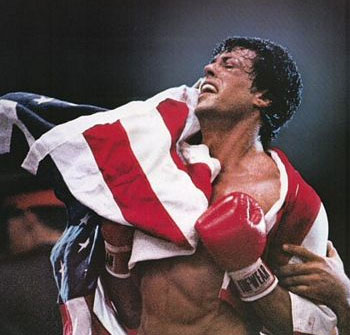 This is a picture from Rocky IV. It has nothing to do with whisky or Bullet To The Head. It’s just awesome and I thought you should look at it.

So, my turn! We should probably mention that there is certainly something to be said for a whisky in a film or on TV not clearly being a certain brand. In Inglourious Basterds for example, the 33 year old Scotch is unnamed and fictional (Tarantino isn’t a fan of any kind of product placement), so Michael Fassbender’s brilliant “There’s a special rung in hell reserved for people who waste good Scotch” moment doesn’t fit this list. Batm’n meanwhile, opts for ‘Clyburn’, and we never do find out exactly what Matt Berry is served in Snuff Box.

Equally, I still don’t know which bourbon is forced down Roger Thornhill’s (Cary Grant’s) neck in North by Northwest. Answers on a postcard please if you know that one! No Bond in this list though Sam. (If there had been, it would have been GoldenEye. Obviously.)

Those aside, here’s my top five…

When I borrowed the True Detective box set from my friend Pete, it was almost immediately obvious that I was going to have to sit still until I’d watched the whole season. Macallan 12 Year Old pops up when Woody Harrelson’s Marty needs something to butter up an old colleague, but my favourite whisky moment belongs to Matthew ‘McConaissance’ McConaughey’s enigmatic Rust. I should say ‘whiskey’ moment though, as tucked in the corner of a tool box from his evidently miss-spent younger adult days is a half bottle of Jameson (and a leather covered hip flask). 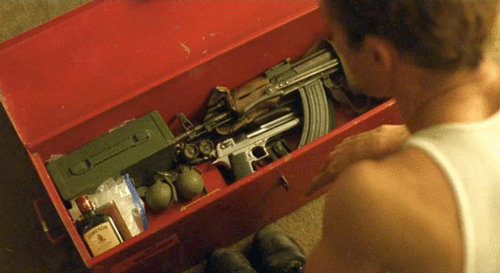 What a film this is. A MoM favourite for years (and a Fèis Ìle viewing tradition) it’s tear-inducingly funny from before the opening credits finish rolling. Whether at the bar, in the bath or putting up with screaming brats on his lap, Billy Bob Thornton’s Willie T. Stokes loves him some Old Grand-Dad whiskey. Not that he’s overly fussy with his drinks, but when he has the choice, it’s this Kentucky straight bourbon that he favours. 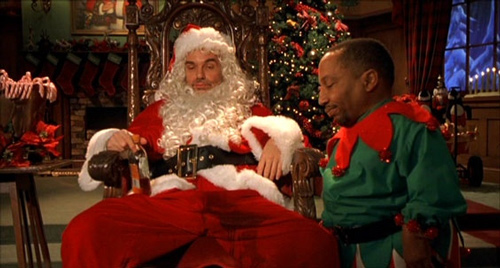 No, not the bit where Daniel Craig crushes a bunch of valiums into a tumbler of Macallan (a single valium into a brandy in the book, incidentally). No, in fact this is a second Irish whiskey entry, and a double entry at that as Colm Meaney’s Gene shares both Locke’s 8 Your Old and Tyrconnell Single Malt with Daniel Craig’s unnamed anti-hero after a couple of beers. Two whiskeys from the independent Cooley distillery (seven years prior to Beam’s acquisition). The book sees Irishman Gene go on a rant about Irish whiskey, but in the film these two bottles simply sit on the table saying all they need to about their owner. 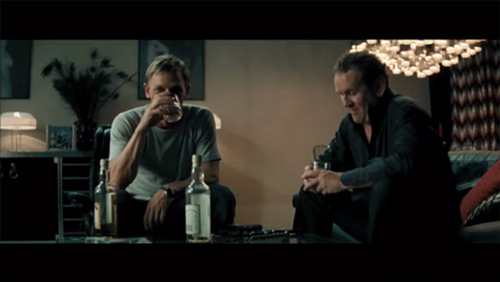 “You find peace with guns?”

“See this? 40 year old Bruichladdich. I only drink this when I’m practically suicidal.”

A line that’s perfectly delivered by Harrison Ford whilst half smirking despite his character Mike Pomeroy’s foul mood. Bruichladdich was included in Morning Glory as Ford himself is a fan and felt that a very special Laddie expression was exactly the sort of thing his character (a once great, semi-retired news anchor) would keep in his drawer for special occasions. Thanks have to go to the encyclopaedic Scotch Cinema blog for this one, without which I may never have even seen this film. 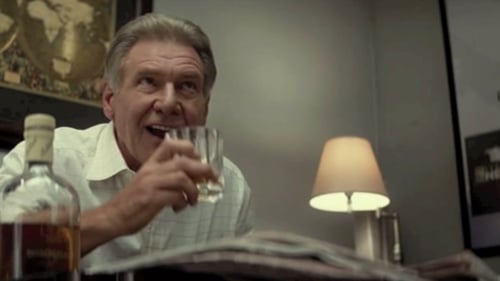 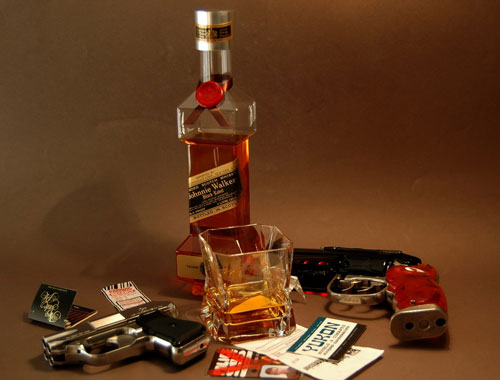 Not the first time this particular image has worked its way into a blog post of mine.

Apparently the Johnnie Walker Black Label bottle shape in the film was signed off by Scott himself, and as it actually pops up in Annie of all places (they shared some storage and staff), it seems that it was probably sourced by the propm’n. Maybe its square form meant filling it with Johnnie Walker was a no-brainer, but it is suspiciously prominent throughout the film… 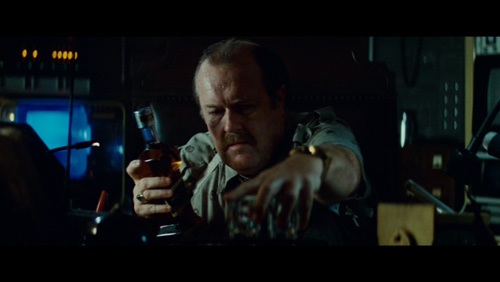 Bryant has a bottle in his office… 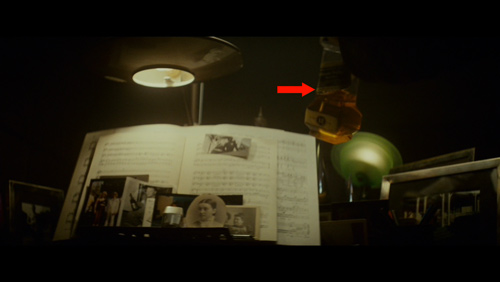 …and Deckard has one in his flat…
(Cue Vangelis…) 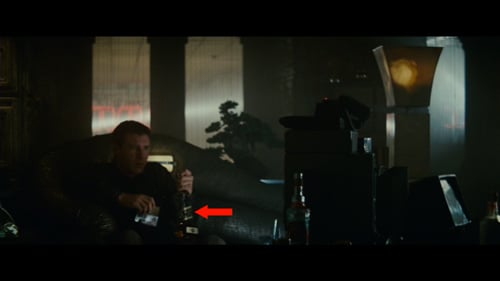 …which he takes over to the sofa by the ESPER machine… 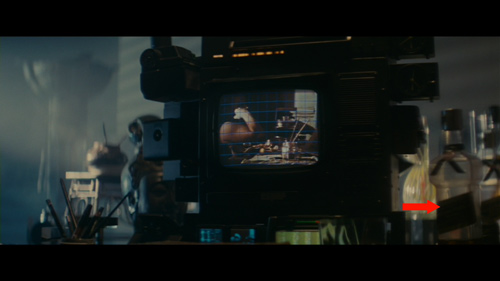 …even though there are already two bottles by the ESPER machine. 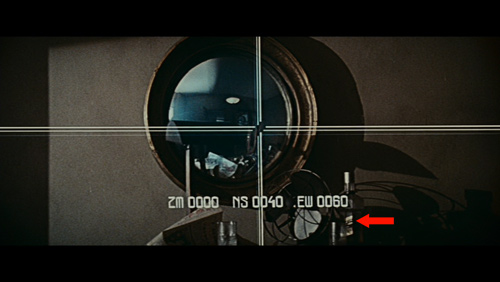 There’s even one in the photo he’s analysing! 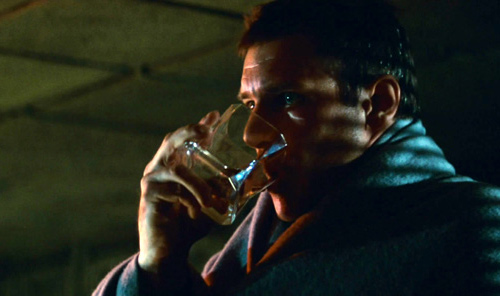 Those tumblers though. #want #need

Even between the two of us we’re sure we’ll have missed out some brilliant whisky appearances here. What’s your favourite film or TV whisky moment? Let us know in the comments below! 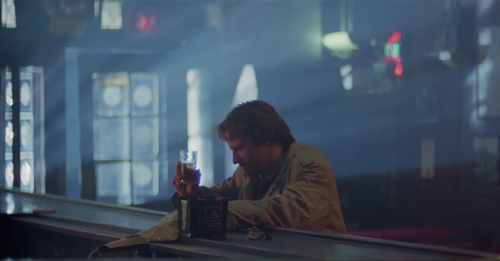 “Double Glenmorangie on the rocks.
*mumble*therecanbeonlyone*mumble*”

Master of Cocktails - The Penultimate Paragraph