What’s the deal with Belvedere’s new and intriguing rye-based expression? We get the low-down and learn all about the history of rye spirits, how Scotch whisky was an inspiration to Polish distillers and why the brand is looking to the past to create the flavours of the future.

On Friday we attended another cyber-tasting, this time with Belvedere’s brand ambassadors Mike Foster and Mark Tracey for the launch of Heritage 176. The new kid in the town is a “spirit drink” (we’ll explain in a bit) which was inspired by Polish distilling traditions and uses centuries-old rye malting techniques to showcase the taste of the distinctive grain and recreate a historical taste.

I know what you’re thinking. Taste? Vodka? Doesn’t it all taste the same? Well, as we’ve covered before, this is a recent development. Historically, vodka was all about taste and flavour, and those days are coming back. “There’s a renewed interest and energy in the category. When Belvedere first launched vodka was in a very different place to where it is now. Thankfully, the days of these candied, toffee, whipped cream or peanut butter vodkas are gone,” says Foster. “The direction of travel is towards credible vodka innovation. It’s more about being authentic. For spirits that means stories of origin and inspiration”.

Foster dedicates a portion of his presentation to Belvedere’s inspiration, the history of distillation and malting in Poland. Belvedere has spent much of the last decade investing in research to better understand rye, its core ingredient, from its role in Polish culture to its origins, covering traditional production methods and examining the places where it’s grown. We learned about perevera, a strong alcoholic drink made by heating mead together with beer which was consumed across eastern Europe from the middle of the 14th century and how the culture developed from there into widespread distillation and innovation. Did you know the first written record of vodka is from 1405 and is written in Polish? 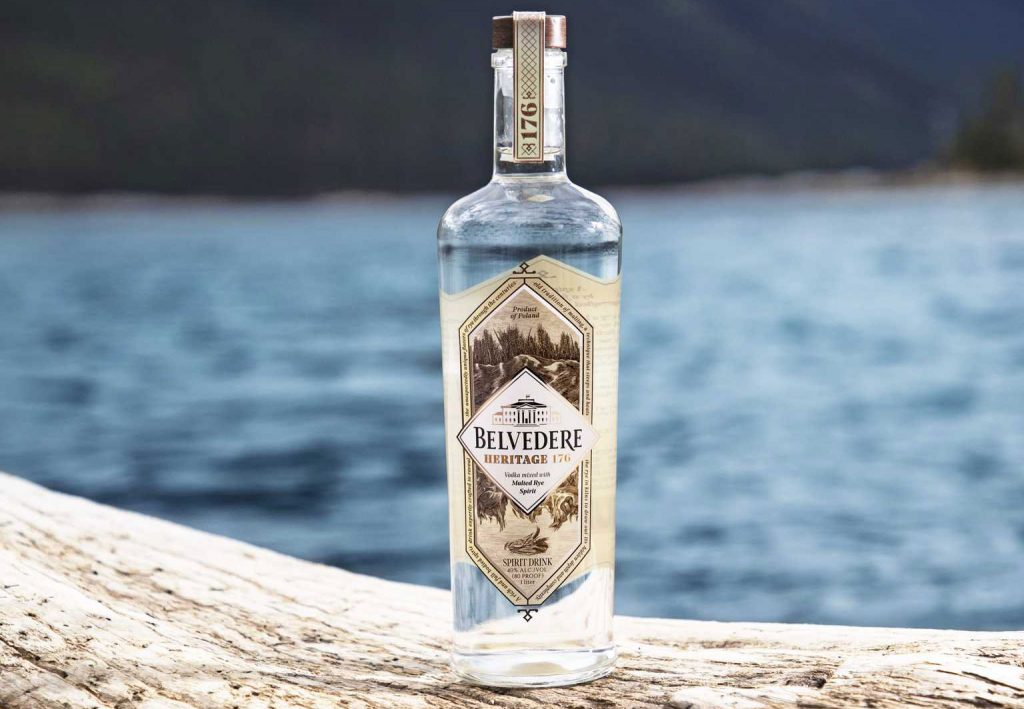 “The Poles take their alcohol very seriously; it’s part of everyday life. Given that it was too cold to produce grapes, malt and rye fueled the industrious Poles to develop their own domestic distilling industry on an unprecedented scale. By 1850, the city of Poznan alone had almost 500 distilleries”, Foster explained. This research into Poland’s malting past uncovered some surprising facts. Archival records from the agricultural society in Warsaw revealed Scotland was seen as a source of farming knowledge. Scottish farmers even migrated to Poland, bringing with them an understanding of distillation and malting practices, and many set up their own agricultural distilleries. “From our research, we found that a distilling process associated with Scotch whisky and beer making was once at the heart of Polish vodka tradition, and that is malting.”

However, with the 20th century came modernisation and the ability to scale up production. With that, the use of malted grain in vodka production began to be phased out. The focus became the neutrality vodka is associated with now. It’s this development Belvedere challenges, which makes sense given it creates vodka solely from good ol’ Polska rye and purified water, which is drawn from a natural well on the grounds of the distillery. No additives or sugars here. Its Single Estate Series demonstrates this outlook, a range created using rye grown on a single estate to show off the terroir and quality of the grain. As does Heritage 176, the brand’s latest innovative malted rye expression.

Heritage 176 was created from a blend of just 2% malted rye spirit with 98% of Belvedere Pure. Although 2% does not seem like much, it makes a huge difference (the upcoming tasting note will reveal more). “We found the formula to reveal the characteristics that would have been present in historical Polish vodka, but sadly became lost with time thanks to a desire for cheaper and faster spirit,” Foster explains. “We all know that malt is not new news. Distillers, brewers, bakers and milkshake makers have been talking about its ability to give character for years. But our ancient natural process made using only rye, water and heat is not very well understood”. 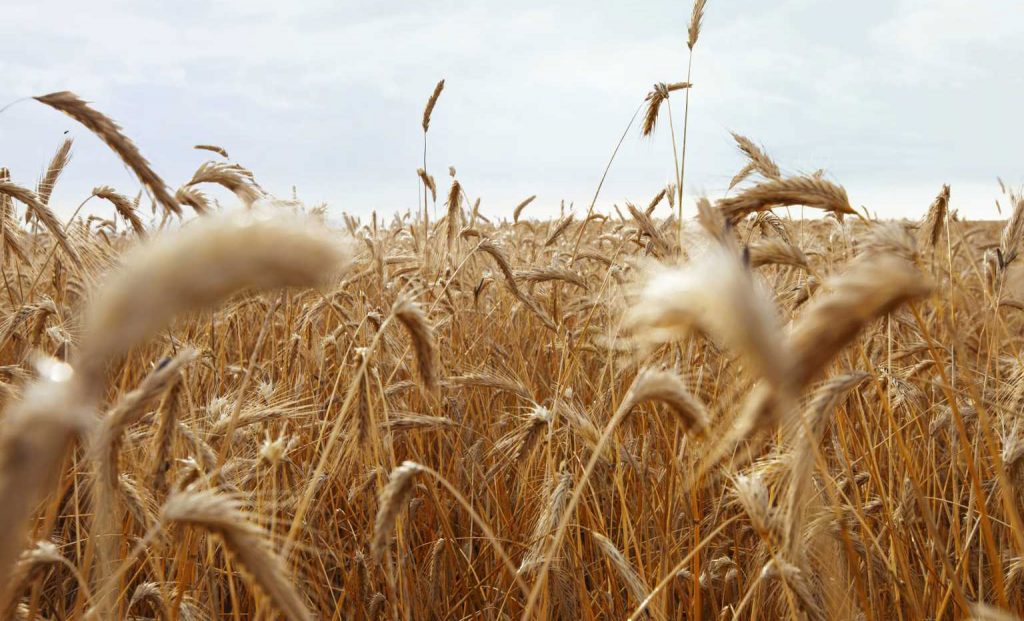 Rye is the key ingredient in Belvedere booze and naturally, the brand is pretty passionate about it

Thankfully, Foster was happy to explain the malting rye techniques Belvedere employed, along with its partners in crime at Viking Malt (which has six malt houses across the world, including two in Poland) to create Heritage 176. “Rye is a very challenging grain to malt, it requires a great level of knowledge and expertise. The malt house we worked with was specifically set up to produce special malts with rye for craft producers such as ourselves,” says Foster. “But the principles of malting grains haven’t really changed for centuries. It’s the same three-stage process of steeping, germination and kilning.”

The first step entails submerging the grain in water at three different temperatures, 35-40 degrees, 25 degrees and 20 degrees. The water is then drained and the rye is left to rest in the air for 24 hours. “What’s happening is this combination of water and air is used to increase the moisture content of the grain. We need to get it around about 46% to allow the complete modification of starch into sugar,” Foster explains.

Once the ideal moisture content is achieved, the grain is transferred to germination drums (big steel drums, basically), which rotates the grain around to keep it loose which allows the funnelled-in air (which is around room temperature) to dry it. At this point, the grain has become green malt, which means it’s started to grow again. For Heritage 176, the green malt is left in the drums for about 4-6 days, in which time the grain is constantly monitored by the maltsters so it doesn’t grow too much. When the sprout reaches the size of the grain, you’re in the money and can stop the process.

The Żyrardów Polmos distillery where Belvedere is made

The third and final stage takes the kiln, which Foster explains is “the most vital stage of malting”. Heat is applied to kill the growth and germination and reduce the moisture content back down to 5%. “There are four aspects to this process for Heritage 176 which starts with forced drying, where we’ll push hot air for about three or four hours into all of the grain to dry all the moisture. Next is the pre-break, this is where the air is blown through the grain for around 12 hours, which dries the surface of each of the grains,” Foster explains. “Then there’s the curing, in which the green malt is cured in kilns up to 176 degrees Fahrenheit which stops all the changes, modifications and growth in the grain. Hence why we decided to call it Heritage 176. We’re using the old heritage style of vodka production and the name leads to a sense of intrigue which gives us a chance to explain this process of malting”.

All of these steps occur at one of Viking Malt’s Polish sites and then the entire rest of the production takes place at Belvedere Distillery. Heritage 176 even has its own exclusive distilling team and stillhouse. At the distillery, the malted grain is milled to create a mash which is then placed in small stainless steel vats where yeast (the same strain used for Pure and the Single Estate series) is added to the mixture. The liquid is then double distilled, the first distillation lasting around 16 hours and creates a spirit of 88% ABV. From this spirit, the heads and tails are cut and the heart is distilled for another 16 hours, creating a 91-92% ABV spirit. This malt spirit is then blended with Belvedere Pure in stainless steel vats and left to rest for two days before it’s bottled at 40% ABV. 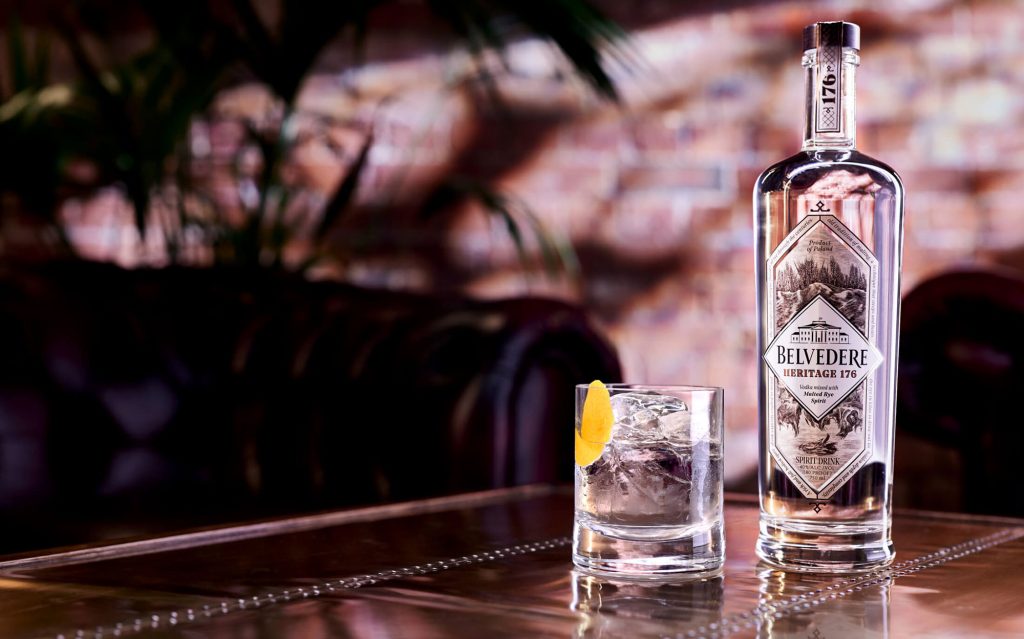 What’s in that bottle is a delightful spirit drink. Why not vodka? Well, because technically the malted ry e spirit was distilled to 92% rather than the required 96% ABV by European law. Belvedere isn’t concerned about this, however. “To us, it didn’t matter if it isn’t legally called a vodka. We’re masters of rye, we want to explore this raw ingredient and to adapt and manipulate in weird and wonderful ways to create flavours”, said Foster. “We’re not trying to adapt to a flavour that hits a certain consumer palate or add anything synthetic or unnatural post-dilation. We’ve just taken this wonderful rye ingredient and processed it in a different, more traditional way. What excites us is getting down to the nitty-gritty and the science of rye”.

Foster also remarked that it opens up the potential for a subcategory for a vodka. After all, as we’ve already learned, vodka made with malted grain and distilled to a lower ABV has its place in history. “I don’t want to as be brash to say we’ve created a spirit category, but we’re on the way to it. It’s a niche product: there are not many vodkas in the world that use malted grain to produce a spirit. To that extent, we’ve probably created a sub-category. I’m quite excited to see if other vodka companies expand to try projects like this and diversify their portfolios,” Foster explains.

The key takeaway for Foster is that vodka does have taste and character. He’s hopeful that it will encourage the rest of the distilling community to create some exceptional vodkas that use different techniques which can showcase to consumers that vodka isn’t just what Dick Bradsell described it as, ‘the coat hanger from which you hang all the flavours onto in a drink’. “We want that to be switched around where vodka is the primary flavour of the drink that then accentuates the other ingredients”.

Tracey recommends serving the spirit over a block of ice with a lemon twist, or alternatively in cocktails. He made one during the presentation which combined 60ml of Belvedere Heritage 176, 5ml of honey syrup and three dashes of walnut bitters. It was delicious and easy to make so I’d suggest giving it a go. Equally, you can happily sip this one neat. Heritage 176 is impressive and fascinating in equal measure. It’s a complex, rich and dynamic spirit with an indulgently creamy texture. It’s such a contrast from the classic Belvedere Pure and I recommend comparing it with a classic vodka so you can appreciate the difference. 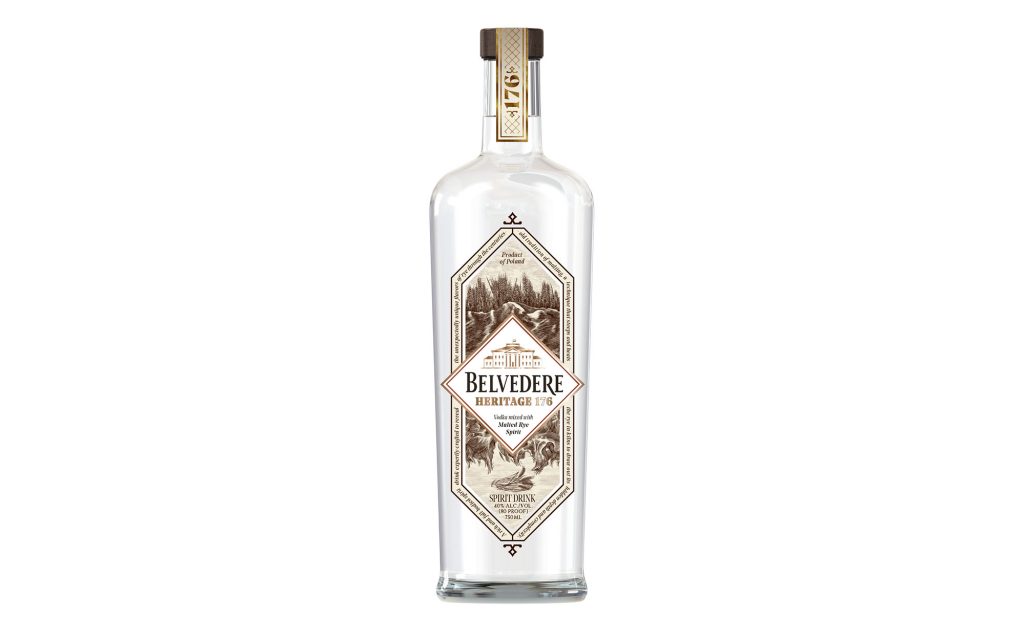 Palate: If you thought the nose was creamy, wait until you get to the palate. It’s like liquified vanilla fudge with a helping of salted butter thrown in for good measure. There’s a touch of lemon shortbread, walnut bread, baking spice and some classic rye notes of black pepper underneath.

Five minutes with... the Schofield brothers

New Arrival of the Week: The GlenDronach Kingsman Edition 1989 Vintage