As Welsh whisky pioneers Penderyn opens its second distillery in Llandudno, we talk to founder Stephen Davies CEO of Penderyn about inventing a category, last year’s Jim Murray row, and why Wales is the New Zealand of the Northern Hemisphere.

It can sometimes be a frustrating business interviewing people in the drinks industry. Everyone today is so media trained. We’re looking for interesting stories, but brands want you to write the PR line. It’s not just the big boys, often smaller distillers have this corporate attitude too.

Well, there was none of this with Stephen Davies CEO of Penderyn, the pioneers of Welsh whisky. He’s a man who speaks his mind which makes him great company even down-the-line via Zoom.

The occasion was the opening of a £5 million new Penderyn distillery in North Wales, housed in an old Board School in Llandudno, and there’s another on the way in Swansea next year. Combine that with the high profile launch of Aber Falls’ first single malt earlier this year plus Dà Mhìle, Coles, and the Welsh Wind, and you have a thriving the Welsh whisky scene. 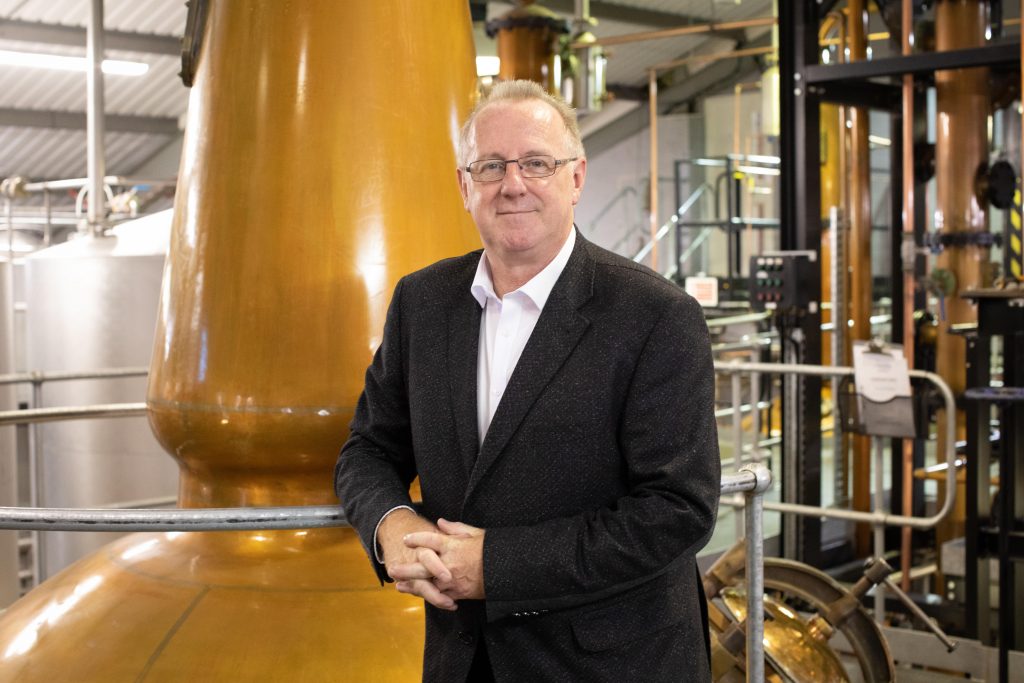 They all laughed at Christopher Columbus

Things were very different in 2000, when Stephen Davies was looking to start a distillery producing whisky in Wales. There hadn’t been such a thing since nineteenth apart from one rogue operation in the Brecon Beacons that was repackaging Scotch as Welsh whisky before running afoul of the Scotch Whisky Association (SWA). Which destroyed the credibility of anyone trying to make Welsh whisky, according to Davies.

“People thought the idea of a Welsh whisky was a real nonsense!” Davies said. He continued: “in 2004 and 2005 [when Penderyn was releasing its first whiskies], it was one of the worst ideas you know you could think of!” But through sheer determination or bloody mindedness, Davies managed to get his idea off the ground.

But it wasn’t just Welsh whisky that seemed like a pipe dream. 20 years ago is a lifetime in whisky. This is pre-English whisky, pre-Taiwanese whisky and Australian whisky was just a rumour from Tasmania. And among the major powers, Japanese whisky was still only really appreciated in Japan, there were only three distilleries in Ireland, and high quality aged bourbon and rye could be picked up in America for a song. For many, quality whisky meant Scotch.

Penderyn was founded in 2000, and straightaway the team was determined to do things a little differently. They use something called a Faraday still which is like a cross between a pot and a column still. It works in batches, like a pot, but comes off at a high ABV, between 88-92%, to produce a light fruity new make.

One of the investors, Nigel Short, insisted on doing “due diligence on the spirit”, as Davies explained: “the feedback he had had on the Penderyn spirit from a senior figure in the Scotch whisky industry was ‘this is a really fantastic spirit, this is really, really good but the idea of Welsh whisky is a bit rubbish!’” 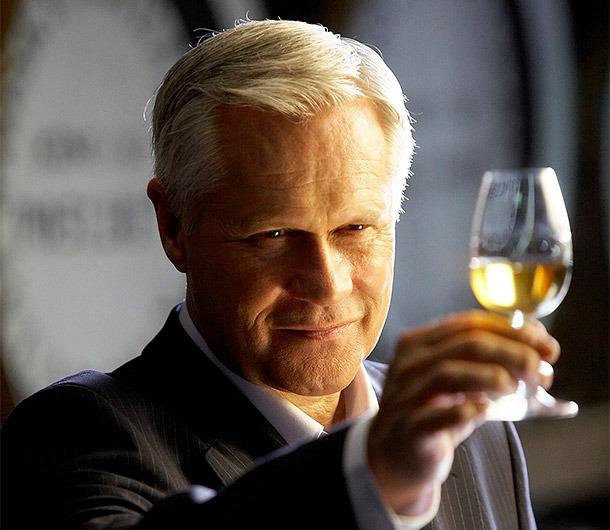 Jim Swan was instrumental in setting up the Penderyn style

But this perception began to change thanks to Jim Swan who came on board as master blender in 2002. Swan developed the Penderyn style based on this fruity new make combined with bourbon barrels, mostly from Buffalo Trace, and a Madeira cask finish. Plus, Davies said: “He instilled in our people an attention to detail that you actually see in all the Jim Swan distilleries.”

“The other thing he did to build credibility,” Davies Continued, “I travelled the world with Jim between 2005 and 2012. Right up until his death [in 2017] he was a non-exec director of Penderyn so he was with us all the way. Jim would be very happy to put a Penderyn branded shirt on and talk to people about the product.”

Having Swan onboard meant that people began taking Penderyn seriously. Davies has very fond memories of working with Swan: “We would be in Chicago and it would be midnight and I’d say ‘right are we going to bed?’ and he’d say ‘no there’s a jazz club down the road, let’s go and have a few beers’. And then he’d be telling you all stuff about the industry, you’d be learning. So it was a wonderful apprenticeship, you know, not just for me but for, I think a number of people in our team.” It was Swan who recruited the current distilling team of Laura Davies, Aista Jukneviciute, and Bethan Morgans.

There is another Jim who helped put Penderyn on the map, whose name isn’t as revered as Swan, Jim Murray. Unlike others in the industry, Davies does not try to play down Murray’s connection to the distillery. “Jim wrote very very positively, he’s always done about Penderyn, and those things absolutely helped us to get attention,” he said.

Davies was uncomfortable about how the Penderyn staff were brought into last year’s row when a journalist, Becky Paskin, accused Murray of sexism. “She’s never spoken to me or any of my distilling team but decided to take offence on our behalf,” he said.

According to Davies, Murray even called up to check that he hadn’t offended any of the all-female distilling team and they assured him that he hadn’t. Davies added: “He’s the only whisky journalist who has come to Penderyn year after year, tasted the product, got to know it, and could speak with authority on it.” 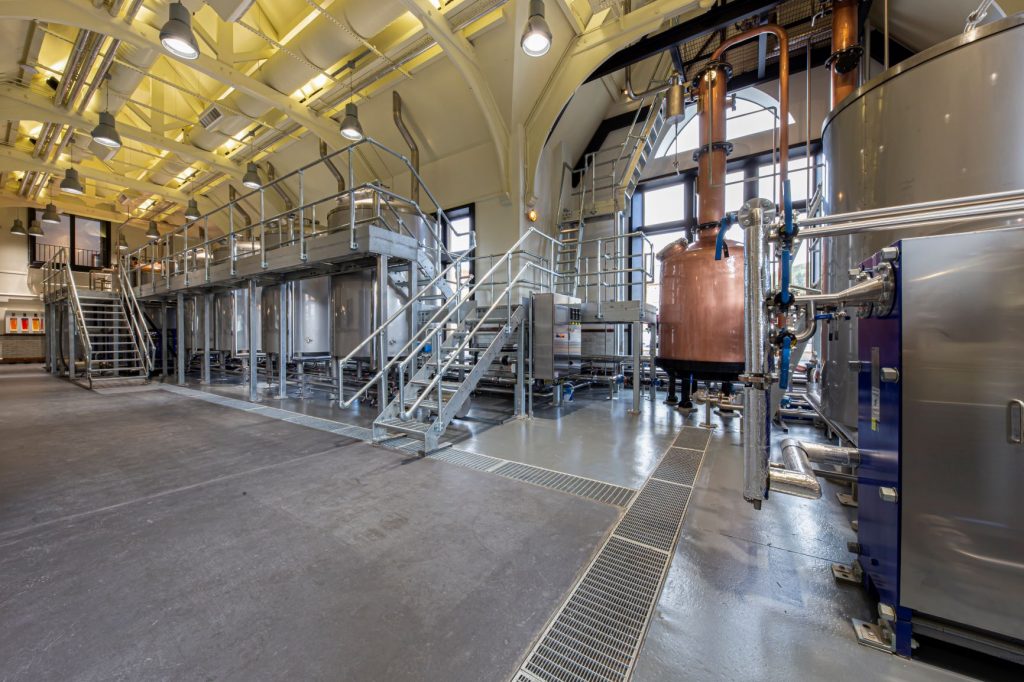 Inside Penderyn Llandudno, the Faraday still is on the right

Since the early days fighting for credibility, the distillery has come a long way. In 2013, on Swan’s advice they installed a couple of pot stills in addition to another Faraday still. This produces small quantities of heavy new make which is used in some bottlings. “We could do with them being a bit fuller bodied,” Davies said. They don’t do this for all whiskies and Davies wanted to keep which ones contain pot still a “trade secret”. But he would tell me that the award-winning (double gold in San Francisco, no less) Penderyn Peated contains about 10-15% pot still.

Penderyn Peated gets its smoky flavour from Islay whisky casks but, at the new £5 million distillery at Llandudno, the team will be making a peated new make. They didn’t know how this would work in a Faraday still so they had a peated wash made for them at the English Whisky Company in Norfolk and ran some trials which proved successful. “With the Faraday still we’re learning all the time,” he said.

We won’t get to taste the results for around five years. “In 2003 there was a fair old pressure to get it out fairly early. I don’t think we’re going to be under that kind of pressure with Llandudno because we’ve got a lot of product on the market,” Davies explained.

Next year Penderyn will be opening a third distillery in Swansea in the former Hafod Morfa copperworks. In addition to the old site, “we’re building a three-storey visitor centre by the side of it. And there’s also the old copper rolling mill building which we’re going to put the barrels in.”

At the moment the plan is to put one Faraday still in, but Davies has other ideas. “I think we’re going to increase that production capacity as well, which I have not told anybody else yet! So this is fairly new, but we’re looking to scale-up production there from what we originally had planned to do.”

Both the two new sites will be geared up to receive a substantial number of visitors. The current distillery gets around 40,000 tourists a year but, Davies said: “I think we’ll get a lot more visitors in Llandudno and in Swansea just because the communication links are a lot better.”

Davies is keen for Welsh whisky to get a GI (geographical indication) now that there are other producers with whisky to sell. There’s a great variation in the kinds of stills used so he sees it at the moment as a guarantee of origin rather than a particular style. “You want it to be fermented, distilled, matured, and bottled in Wales, all of the things that I think you’d expect to see in the GI. But I think the challenge then is finding the uniqueness.”

Davies is also involved with marketing Wales in general which is not without its difficulties. “People have not heard of Wales, in the way that they’ve heard of Scotland or Ireland,” Davies said: “unless the country plays rugby.”  He tells a story about a man at a whisky show who kept on referring to Penderyn as ‘Scotch’ and then asked “Wales, that’s an island off Scotland?’”

So there’s a long way to go.The idea is to market Wales as the New Zealand of the Northern Hemisphere because of the similarity between the two nations with their rugby, sheep, and nascent whisky industries. “We’ve got at least as many sheep as they’ve got in New Zealand!” he joked. 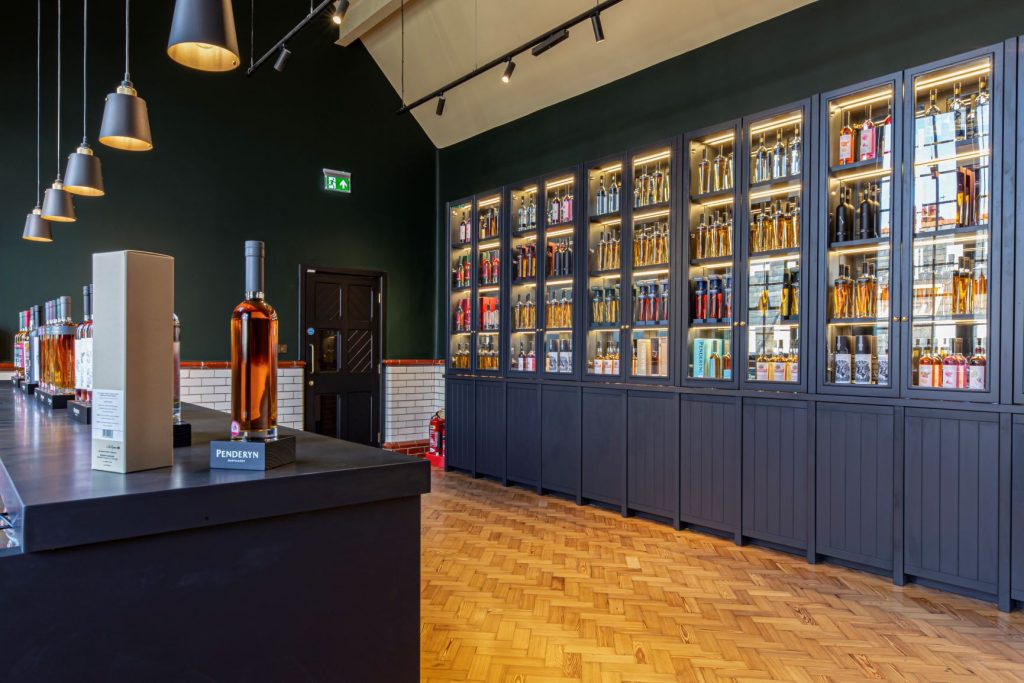 Penderyn Llandudno is ready to receive visitors – look at that polished parquet!

Closer to home, Davies is involved with a campaign called Hiraeth Live. He explained: “‘hiraeth’ is a lovely Welsh word, which means ‘a longing for home’, almost like you want to come home, it’s like a homesickness, but you long for a homeland that may not be there anymore. It’s kind of a belonging feeling.” The campaign raises money for Hafal, a Welsh mental illness charity, and Llamau, which works with the homeless in Wales.

Next month, there will be a special Hiraeth ‘Icons of Wales’ bottling with the proceeds going to charity. Unusually, this will largely be made up from seven-year-old pot still, “which we’ve never done before,” Davies said, blended with some lighter whisky from the Faraday stills.

But that’s not all. This September Penderyn will be celebrating its 21st birthday in the time-honoured way, by releasing a special whisky. It will be a single cask whisky, one of the first distilled at the distillery, so will be around 20 years old.

What better way to celebrate a distillery that has been proudly flying the flag for Welsh whisky for 21 years, even when everyone thought they were mad.

Master of Malt @MasterOfMalt
44 minutes ago
On The Nightcap this week: @johnniewalker_ gives away 270,000 drinks, @RosebankWhisky launches its last old release before the distillery reopens, and the cheapest pint in the UK is revealed.