Set against the backdrop of the South Island of New Zealand – renowned for its mountains, lakes and glaciers – the world’s most southern whisky distillery is surely among the most picturesque on the planet. So stunning are Cardrona’s surroundings (see photo in header), the distillery looks like a 3D rendered image in pictures. Step inside the bright, airy stillhouse with its floor-to-ceiling windows and you’ll enjoy a prime view of the rolling hills – if you can peel your eyes away from the kit: two shiny Forsyth copper pot stills, a Jacob Carl column still, a Jacob Carl finishing still, and a 600-litre copper gin still.

It’s the culmination of years of planning and research by Desiree Whitaker – who travelled the world learning from whisky’s best teachers, including the late Dave Pickerell, ex-Maker’s Mark and Whistlepig. To make their single malt new make spirit, the team ferments Laurette barley with a yeast variety called Pinnacle, as selected by Whitaker. Pure alpine water is sourced from Mount Cardrona for distilling and bottling. 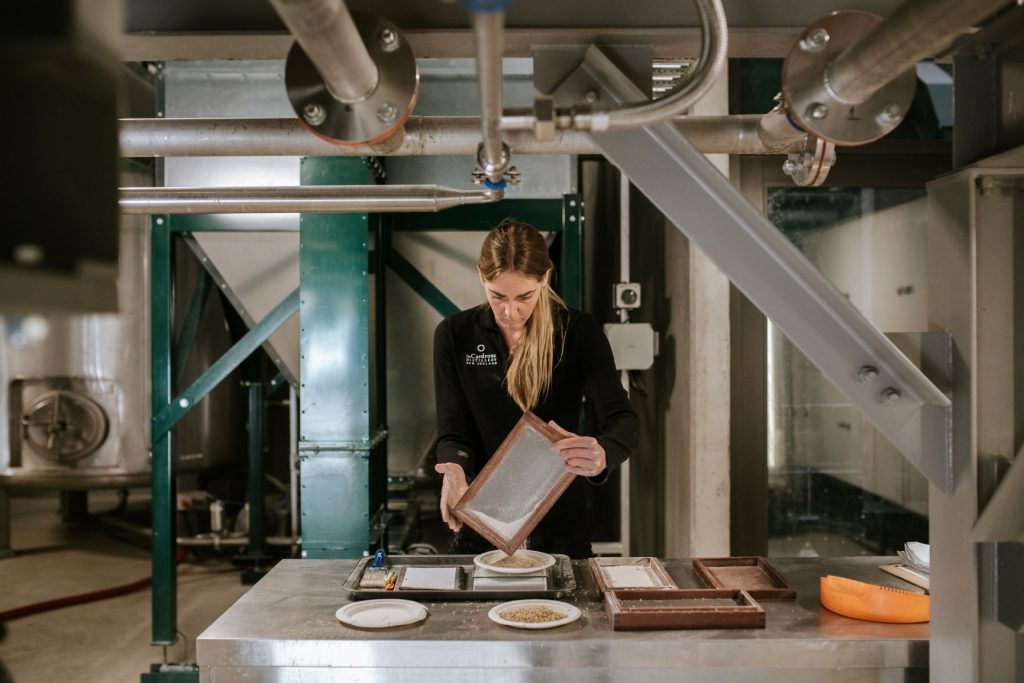 In December 2020, another bottling was added to the line-up. Five years after laying their first cask on 5 November 2015, the team released Growing Wings, which sees their single malt matured exclusively in Oloroso sherry butts for five years. As Cardrona toasts the next stage of its whisky maturation journey, we caught up with head distiller Sarah Elsom…

MoM: Thanks for chatting with us, Sarah! Could you share a little bit of background about Cardrona Distillery?

Sarah Elsom: Its history is quite short but absolutely action-packed. It starts with Desiree, our chief executive and fearless leader. She went off to university to study law, it was not for her so she dropped out and got on a plane to the UK to pour pints in a little bar in East London like so many Kiwis have and fell in love with whisky. Her first distillery visit was on her 21st birthday, when her mother came over to visit, and a seed was planted. On coming back to New Zealand, she grew a small dairy farm into a hugely profitable business, which she eventually sold. That created an opportunity to pursue a passion project, and she settled on perfume. At the distillery we’re surrounded by over 2,000 ancient perfumery roses, which are stunning. Her dream naturally evolved into distillation – and so we are now at a distillery, with beautiful roses growing as we work. She spent years researching and traveling all over the States and Scotland learning the process and made some key connections with industry greats. After years of planning, she settled on the Cardrona Valley. It’s a beautiful location for maturation, we’re at a nice altitude with swings in temperature mediated by clever engineering.

MoM: And where did it all start for you – how long have you been distilling?

SE: This is the very first distillery I’ve worked in, my background is in wine. I studied viticulture and oenology at university, fell in love with it and haven’t really looked back. From university, it was my ticket to see the world. There’s an opportunity to work for the harvest period, because that’s when wineries need all hands on deck. I hopped from south to north hemispheres chasing harvests for about three years. I always came home in between – I’m very close with my family and love New Zealand, it’s a great place to come home to – and during a period at home I learned that Cardrona was being built. It was fantastic timing and an opportunity presented itself. Not as a distiller at first, I was simply going to work part time, learn a little bit more, take tours, but I found myself gravitating back towards production. Our team is very small, I have three distillers that work with me and we are really Desiree’s hands – she’s still so closely connected to everything here, production included. We all happen to be all girls, though not by design. 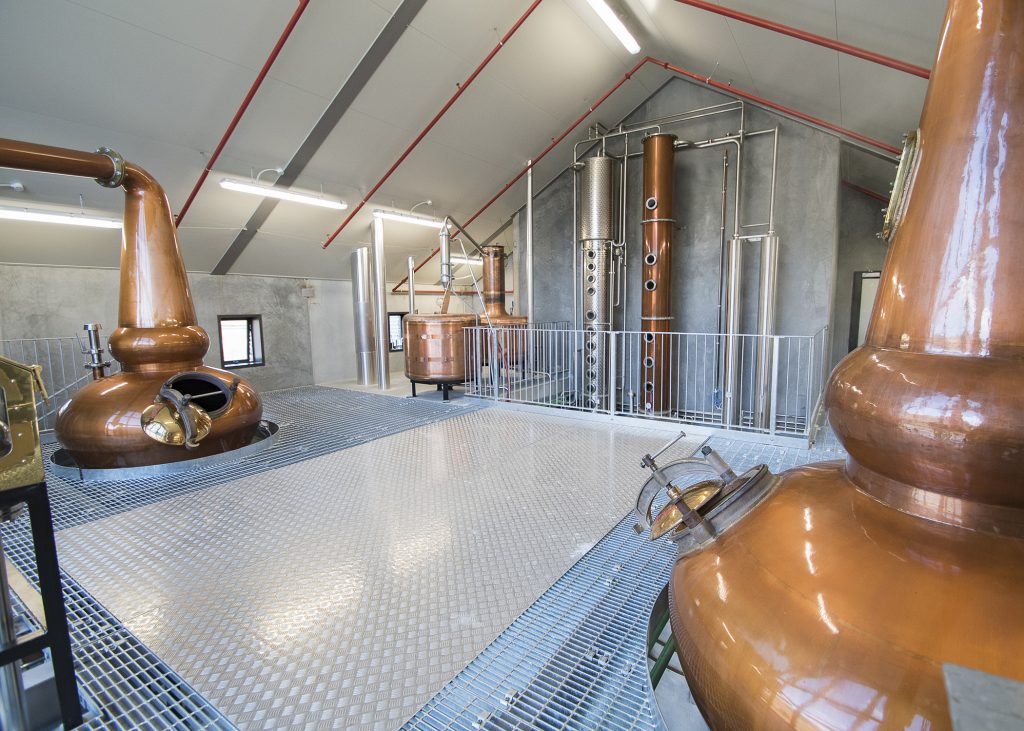 MoM: Could you run us through your distillery equipment, and explain how it creates the style of single malt spirit you’re looking for?

SE: Cardrona is the largest distillery in New Zealand, but very small on an international scale. Our mash tun was custom built by Forsyths. Our copper pot stills are Forsyths, they’re hand-beaten, short, squat, and have a large boiler bulb in the middle, so lots of reflux and copper interaction – the surface area to volume ratio of a wash to copper is high on the copper side. Our new make is comparatively quite sweet, there’s a richness and almost toffee-like note that is incredibly soft for a raw spirit. Maybe it’s due to the climate, the altitude and the accelerated maturation from that, but our young whiskies are looking older than what you expect them to be. When Desiree initially started out, she didn’t want to go younger than 10, she wanted her first whisky on the shelf to be near perfect. But they’re looking that good that we wanted to share the progress with our community. This year we’re looking forward to the five year old.

MoM: Have you experimented with different barley varieties, yeast strains or casks?

SE: Right now we’re probably too small to demand micro-level scales in terms of barley. It’s Desiree’s dream to have New Zealand-grown barley malted on site, that will be our opportunity to play with different varieties as we look to a more local supply. For now, we take the absolute best that we can secure. Because we’re still so new, experimentation isn’t total changes in recipe – it’s honing our craft and continuously improving our processes to let the barley speak for itself. We put a lot of emphasis on fermentation – if you don’t create [flavours] in fermentation, you can’t concentrate and collect them in distillation. We kept the maturation programme quite traditional at first and have started introducing local wine barrels, considering Port, Sauternes and Chardonnay to see how it looks. To make a fantastic new make spirit and let this natural vessel do its work – versus pouring that work into the field – was a real 180 for me. It makes it all the more exciting because it’s so different from what I was used to. 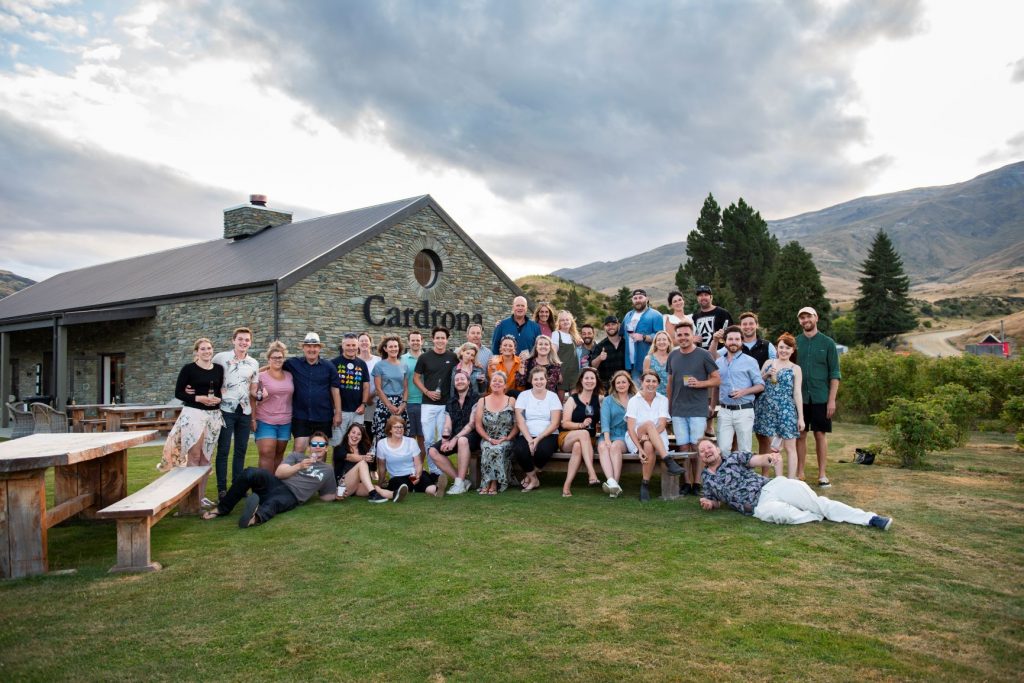 Meet the team and note the lovely scenery

MoM: You use some botanicals that you forage from the estate to make your gin – how variable are they over the seasons and how have you gone about creating a consistent spirit?

SE: There is a botanical in the gin, rosehip, that grows in the valley. It was planted by Chinese gold miners – 150 years ago, this place was was full of thousands of people searching for gold. It’s really cold in winter, so they planted rosehip to create these very rich vitamin C teas to fight off scurvy, and it just took to the valley. We pick it at that time of the year it’s budding and dry it out, so that takes away a lot of inconsistencies. The elderflower for our liqueur also grows in the valley, the launch each year is dictated by when the flower is in bloom and we can find a window when it’s not raining and the flowers are dry and smelling really sweet. Citrus has to come from the North Island, it’s not quite warm enough here. We use the peels fresh, so it’s just a matter of using them straight away. Unfortunately we cannot grow juniper, the local council won’t allow you to plant anything that would acidify the soil. Anything that’s classed as a pine competes with the native flora and fauna here. I’m somewhat grateful for that because it is not an easy plant to deal with, it’s quite gnarly. So we bring that in from a New Zealand-based trader. We’ve seen inconsistencies from that and we mitigate them by milling the juniper according to the oil content of the pine cones. We played with different infusion times in the spirit prior to distillation to really let that juniper shine through.

MoM: And finally – though it’s early days, what would you say are the hallmark flavours of a Kiwi whisky?

SE: What we don’t want to do is pigeonhole a flavour profile too early. We’re at this really exciting point of the industry where people can start a distillery and go in any direction they want, and it would be the worst thing ever if we decided that a New Zealand whisky had to taste a certain way. We just want to make the best whisky that we can, that will always be our goal – to stand on the shelves with the greats. The conversation needs to focus more on ensuring quality and authenticity, because New Zealand is our brand as well as Cardrona – people see New Zealand on a bottle and they have expectations. The more styles of whisky that come out of New Zealand, the better.

The Cardrona range is available from Master of Malt.

We are sad to say that for the time being this is Annie Hayes last piece for Master of Malt. She’s been with us since 2017 first as a staffer and then contributing freelance work. We just want to say thank you for all the fascinating, amusing and beautifully-written articles, and wish her well for the future. Here’s raising a glass of something fancy to you Annie.

How Masons Gin rose from the ashes