It’s London Mezcal Week, so today we have an agave double bill. First an interview with Björn Kjellberg, a Swede who fell in love with agave and now runs distillery tours of Mexico. Then this afternoon, we’ll be mixing up some mezcal for our Cocktail of the Week.

You can’t miss Björn Kjellberg. He’s a tall pale Swede with a shaved head and Mexican-style tattoos all over his body. We met him back in May at the EBS conference held at a villa up in the hills above Sitges in Catalonia. This is the annual gathering of teachers from all the European Bartenders Schools around the world. It’s a bit like Highlander, only with cocktails. As you might expect, when nearly 100 bartenders mostly under 30 meet in a town famous for its nightlife, there were some late nights involved. But the EBS crew were as into learning as partying, and despite some bleary eyes, everyone listened intently as big names from the drinks industry like John Quinn from Tullamore Dew and Ludo Ducrocq, formerly with William Grant & Sons, now with Glenmorangie, gave presentations. Even among such drinks luminaries, Kjellberg’s talk on agave was a highlight of our visit. He’s so immersed in mezcal  and Mexican culture that his typically excellent Swedish English sometimes came out with a Spanish inflexion. So who better to explain all things agave during London Mezcal Week. 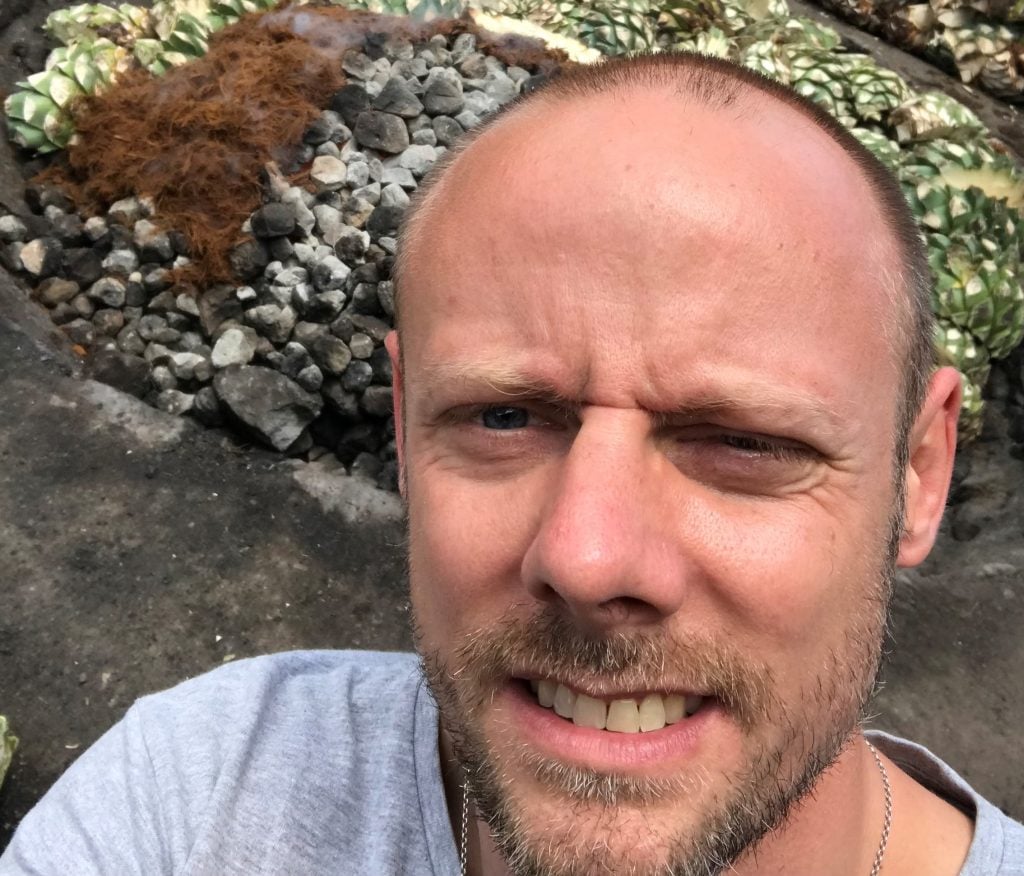 Kjellberg in Mexico, note traditional fire pit for cooking agave in the background

Master of Malt: How did you get involved with EBS?

Björn Kjellberg: I started working as a bartender at the nightclub back in January 2002. And it just kept rolling. I started a bartending school with a friend in 2006 and ran that for about seven years. Today I spent most of time looking after the Tequila brand Altos in Sweden and soon also the mezcal brand Del Maguey. I began working with EBS in 2013. I got invited to host a full day education on Tequila, mezcal and agave as well as some cocktail inspiration for the Teacher Academy and Advanced Bartending programs they ran in Stockholm then. One thing led to another and some years later I got the opportunity to be part of the EBS Board of Education to push the school further and to take lead as, not only the largest bartender school in the world, but also the premier one.

MoM: Can you remember your first bottle of mezcal?

BK: I am pretty certain it was Recuerdo de Oaxaca or maybe, El Señorio back in 2006. The old original bottlings before Casa Armando took over the production. Not saying they ruined it or anything, but it was a whole other beast back then. I later became good friends with Vincente Reyes who founded the brands and he was the one who guided me in Oaxaca the first time and lay the foundation of the deeper understanding and appreciation of this culture.

MoM: When did you first go to Mexico?

BK: In 2010, I spent about a week in Jalisco visiting six or seven producers and then a few days in Oaxaca for another three or four visits. 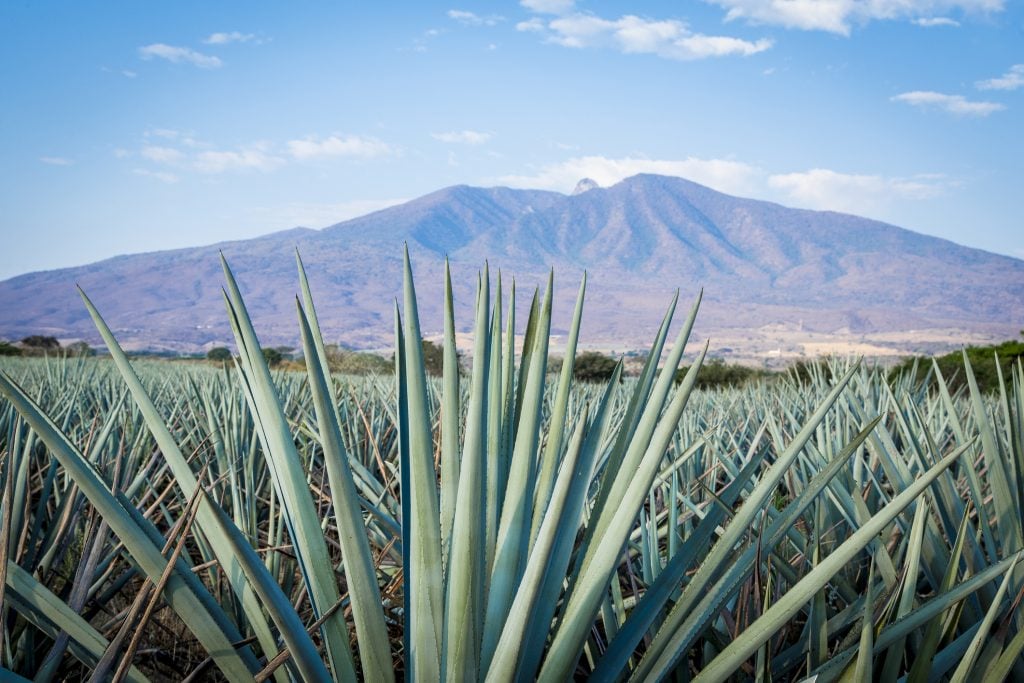 Agave plants which are destined for mezcal

MoM: What is it that makes mezcal so special for you?

BK: It is still alive! Not saying all other spirits are dead or too industrialised, but mezcal really is more alive. The only other spirit that comes close, as I see it, is Haitian clairin. Say Scottish whisky, as an example, it is important for the people in the communities and it is important for the identity of Scotland and so on. But it is not about life, it is not about death. It has to some extent lost its deeper roots and connection to it origin, to its ancestors and its indigenous role. Then, of course, we have the agave. No other crop in the world of spirits is so unique and extraordinary as the agave. People have been using it for food and for textiles, drinks, fuel and even shelter for more than 9000 years. It is embedded in ancient folklore, myth, religion and culture. With agave we are preserving ancient cultures and traditions. Each bottle of family-produced mezcal actually matters to someone. There is a real person and a family behind, and for them a little means a lot. I would love to recommend everyone with the slightest interest in spirits, culture or Mexico to watch the beautiful documentary Agave is Life by Meredith Dreiss and David Brown of Archero Productions. It gives gives you a deeper understanding why agave is important.

MoM: Are you happy with the new designation system (good explanation here) for mezcal?

BK: Very! As a rare thing they put people in charge who actually listened to the smaller producers and looked at production from a craft and tradition perspective first when stipulating these new rules and regulations. Also, I think they made it really fair even for the bigger producers who have chosen a more industrial way of reaching growth. Is it made from agave? Is everything made within the borders of the designated area? Good! Then we have a mezcal. Then if you choose more ancient or crafted methods of production you may add that to the name. Brilliant! More spirits categories should look at this.

BK: Yes, of course. Just look at the journey we made the last ten years. I never think mezcal will be as rum, vodka or gin, but it for sure will become normalised. This is also why it is so important with education and showing all parts of the mezcal industry and world. To allow growth and new influences without diminishing the traditions. I am pretty sure both modern and traditional mezcals can live side by side and that both will prosper from each other. 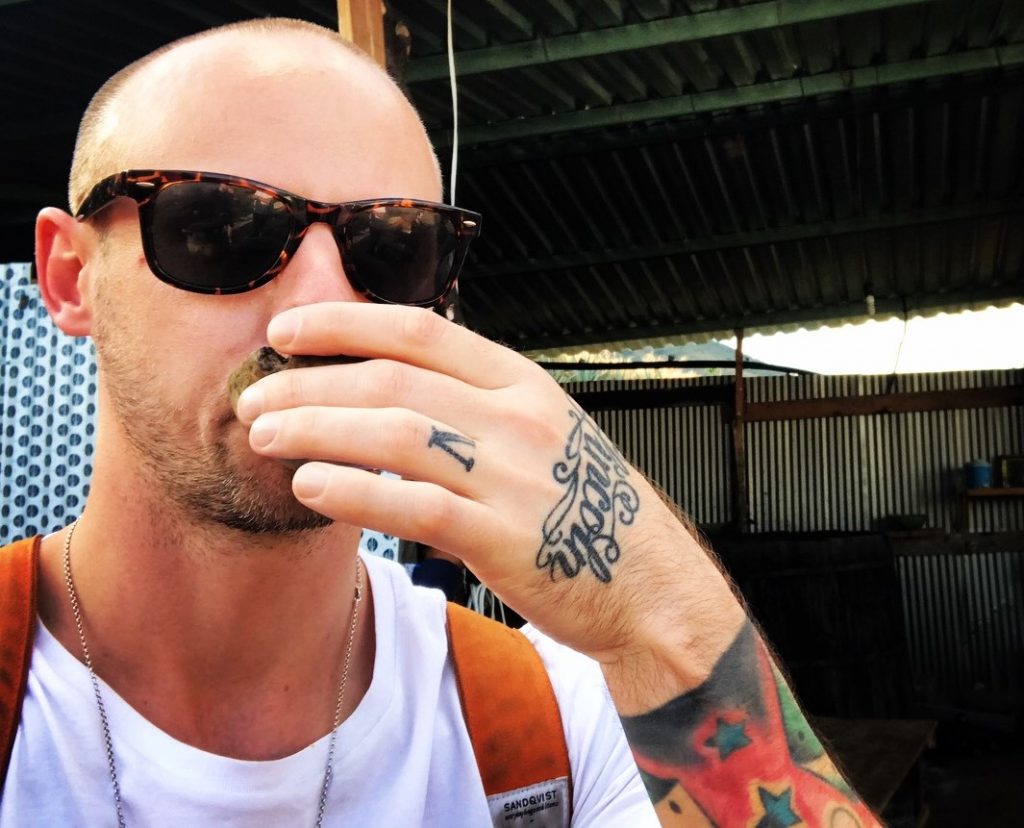 MoM: Do you have a favourite mezcal bar?

BK: In Mexico I say Mezcalogia in Oaxaca and La Clandestina in Mexico City. Outside I would go for The Barking Dog in Copenhagen. Even though it is not a pure Mezcaleria they always carry a great assortment that is always on the move and also care a lot about each bottle. Then I have to mention La Punta in Rome as well. Great bar by great people.

MoM: Do you have any tips for people wanting to go on a mezcal tour?

BK: It is always tricky, since a lot of people these days are going to Mexico, I always get the questions for recommendation for cool palenques (small artisanal distilleries) to visit. I can, but you will never find your way there. Not that they are secret or anything, it is just that most of them are located in such remote places and that this is not an industry as Tequila is where a lot of producers have organized tours or a visitor center or such. For a lot of visits, you need someone on the inside. This is one reason why I have been organising and putting together educational trips to both Jalisco and Oaxaca. To give more people the chance to see and get to know what I care about the most in the world. Other recommendations if you happen to be in Oaxaca is to swing by the bar Mezcalogia and talk to the staff there and they can hook you up. The family who owns the bar produces some of the finest mezcal I have ever tried and know pretty much everyone.There are also tours you can take and buy tickets for on the streets, and if you drive to Santiago Matatlán there are plenty of palenques to visit.

BK: Funny, that this is the hardest question here. Since there really are no classic mezcal cocktails, most are signature drinks from a bar or bartender or contemporary riffs on classics. But I would have to say either a mezcal Negroni (equal parts) with a Jamaican style dark rum float (brand of choice for me is Smith & Cross), or something light fresh with tropical fruits like pineapple or mango. In general, I think mezcal is at its very best in cocktails when it acts more as a modifier than as a base. It only takes a little to do a lot.

MoM: And finally, when did you get your first Mexican tattoo?

BK: The first with a pure Mexican motif is a day of the dead sugar skull I had done in 2008. Then I also have part of a drawing by the Mexican painter José Posada and an agave behind my left ear. Then again, pretty much half of what I got are Latin American Catholic motifs, so I guess I got a lot of Mexico-relatable stuff. This comes even before mezcal found me. It was meant to be!

Master of Malt @MasterOfMalt
13 hours ago
Looking for a Burns Night dram and love Islay #whisky? Snap up a bottle of Aerolite Lyndsay and enjoy a fab smoky single malt!