This week we’re celebrating ten years of That Boutique-y Whisky Company by raising a glass to the artist who has created every label. Meet the wonderful Emily Chappell.

Back bars and drinks cabinets are a lot more colourful and creative than they were a decade ago when it comes to whisky, and Scotch whisky in particular. Back in the noughties, when visiting a whisky bar, you’d be greeted by rows and rows of austere, classic designs. Ones that prioritised the distillery name, revealed very little about the liquid, and frankly looked a lot like the bottle next to them.

The labels of That Boutique-y Whisky Company

That’s not the case now, and that changing of the guard can be partly attributed to a certain independent bottler, one that launched back in September 2012. That Boutique-y Whisky Company (TBWC) entered the world four whiskies strong, each with a unique label which said something about the distillery or liquid inside.

The idea was that every whisky has a story, and TBWC wanted to tell it in a way that stood out from everyone else. The chosen route to defy convention was hand-drawn art in a graphic novel style, a look that has since become a key signature. And it’s all from the brain of one artist.

You see, TBWC doesn’t have some blender or distiller whose been there since the start. There’s no David Stewart or Dr Rachel Barrie-esque whisky maker to champion. Instead, the person who has been there since the beginning is artist Emily Chappell. It’s her, and her alone, who has brought over 200 different Boutique-y whisky labels to life for the last decade.

So, as we mark ten years of TBWC, we spoke to her to find out how she ended up creating some of the most unique labels in whisky, what her favourite designs have been, and what the craziest brief she’s ever received is. Here’s Emily:

“I was always the creative kid, good at taking photographs and art etc. but you didn’t know you could make a job out of it. You thought art was the preserve of the middle classes. I did visual communication at Glasgow University, such a creative city where it’s so easy to be an artist with music and arts and a big DIY scene. It became real after moving to Glasgow”.

When the call came from TBWC, Chappell had just become a freelance illustrator with her own studio. “I’d been through all the classic artist struggles, but then took the risk to go full time and was doing theatre posters, getting commissions, and building a portfolio of work to show to clients, you know becoming a proper illustrator and keeping it diverse,” she recalls. Chappell wasn’t exactly expecting a regular gig when TBWC got in contact. “Originally, I thought it was just label”.

The commission was for a bottle of Port Ellen featuring John Beach, avid collector and owner of Fiddler’s Highland Restaurant on the shores of Loch Ness. “The brief was something about lemon drops and crying with John sitting on a rock. But that was really nice one because I’d met John which made it a really simple one to start with. You can’t capture somebody’s personality from a photograph so if you don’t know the person doing a likeness is really hard. I’m more confident in showing them now, at the beginning I thought they’d be so offended. Now I feel like if they like it, they like it, and if they don’t, they don’t!” 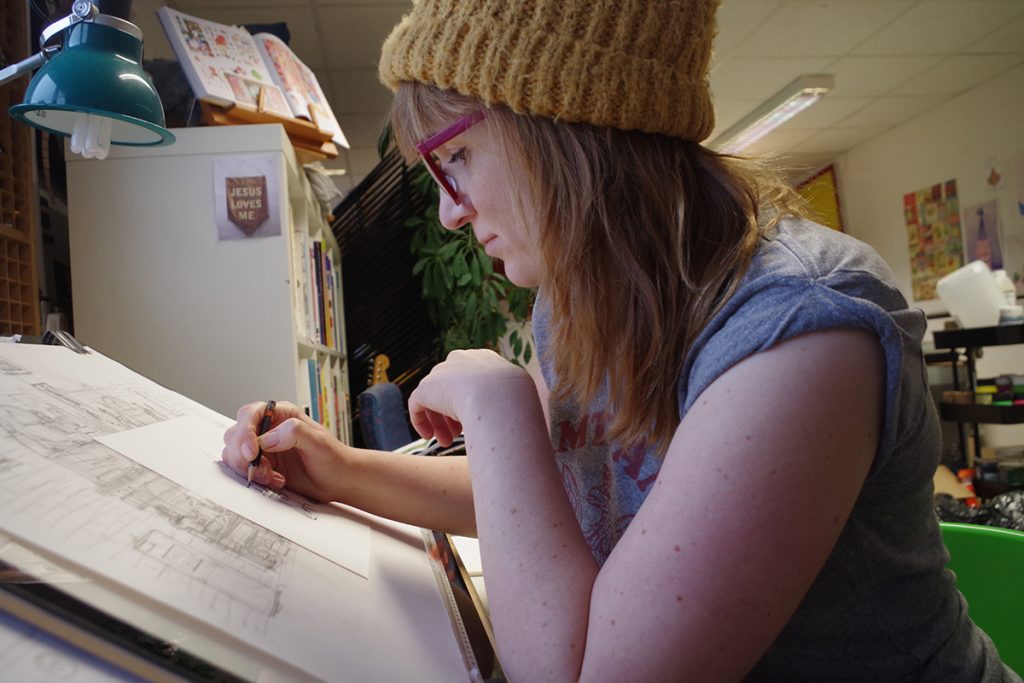 This was the first time Chappell ever did graphic novel-style art, which she found an intriguing challenge. “I didn’t know if I wanted to go in that direction because it’s some people’s niche and it’s what they do, but it was a great opportunity and over the years it’s made me better, y’know? It’s improved my technical ability, and my ability to get likenesses. To lay things out on such a tight label keeps you rounded as an illustrator. I like that I can bring something unique to it, it’s my take on a graphic novel-style label.”

Her process begins with a little notebook with loads of scribbles filled with initial thoughts about the brief, where she considers the requirements and what needs to be there, as well as how to fit the scene on such a small canvas as a whisky bottle label. Then Chappell will sketch her idea to scale, before drawing it up with pen and ink. She’ll send that in and see if she’s ticking the right boxes, and it does then scan it and colour it digitally.

“It’s part old school, hand-drawn, then part digital,” Chappell summaries. “I had considered going down the more modern route but I really love the hand-drawn element. The only roadblock ever will be some kind of compliance, just making sure you don’t step on any copyright toes”. Over the decade, she says her own process has pretty much stayed the same, but the briefs have become more refined and it’s easier to see the Boutique-y vision from it. 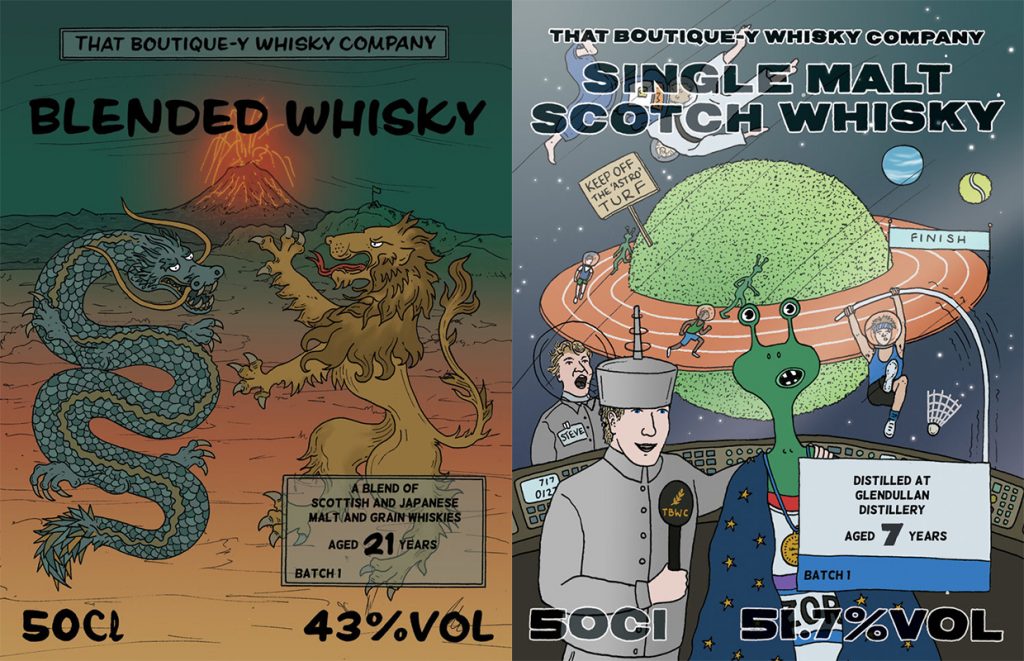 These are not your conventional labels

A decade of bafflingly brilliant briefs

That doesn’t mean the briefs TBWC sends are conventional or even sane. “A lot of the briefs make you go ‘what?!’ Don’t forget, you only see my interpretation of them! Sometimes the brief is a homage to a TV show so I can I take a break and watch it, that’s really nice,” Chappell says. “I remember there was a Secret Distillery one where the request was for a human/swan hybrid through a rose-tinted lens and everything just went bonkers. I like the briefs that are a little open-ended. If there wasn’t anything too obvious about the distillery you can go in different directions. One was Space Olympics, so already you can imagine all the different elements you can bring to that”.

Picking a favourite label, therefore, is not easy. “It really depends what day you get me on because there’s so much humour and variety. But I think there was a blend between Japanese whisky and Scotch whisky so we did a label with a rampant lion and a dragon against the backdrop of an apocalyptic scene. It’s simple but it’s a bit manga, it’s a bit graphic novel, a bit moody, but it’s really symbolic, I really like it. Humour is such a big one for me if there’s a lot of that in there that really appeals to me”.

Her takes on what TBWC envisioned for its label have made us laugh over the years, but more than that, Chappell has had a big hand in changing the face of the spirit we love, with many following suit in the last decade and reconsidering what the whisky label can be. So, what’s next?

“I love creating visuals, who knows where that’s to find out, but as long as I’m creating things I’m happy. It’s a great way of exploring the world through different commissions, theatre posters, book jackets, your own personal work, and whisky labels. You amalgamate them and that becomes your own source of creativity. You’re a 3D person and you explore the world through it”.

You can watch a longer version of our interview with Emily here and check out her Etsy here.

Master of Malt @MasterOfMalt
10 hours ago
Yup, you're looking at a fuel can full of London dry gin – a gin can! Produced with an array of botanicals from Italy, the result is a delightfully delicate expression with thankfully no petrol notes to be found. 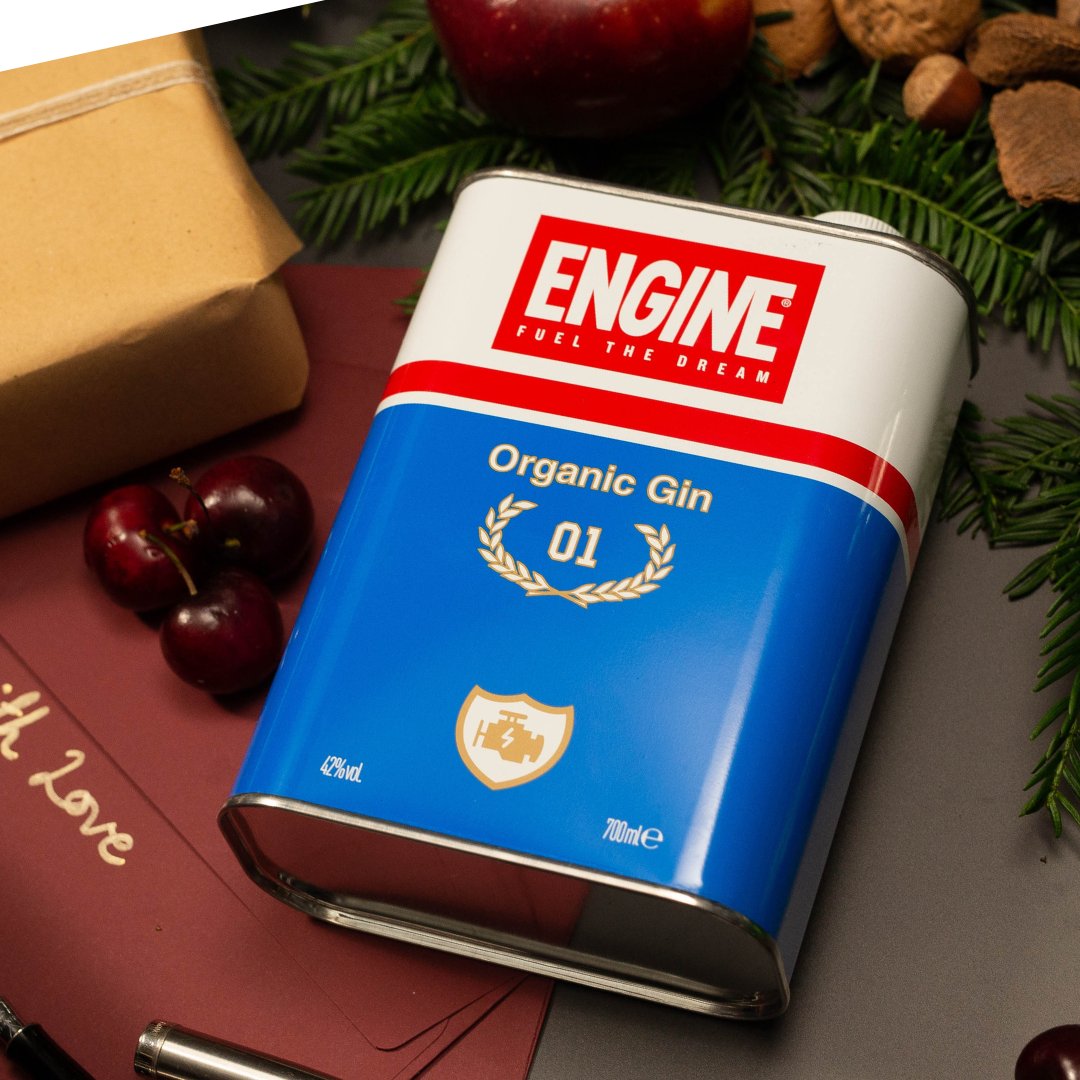 Master of Malt @MasterOfMalt
12 hours ago
If you’re on the lookout for a whisky Christmas present this season but also mindful of not breaking the bank then these bargain bottles are perfect for you. Not one is over £35! 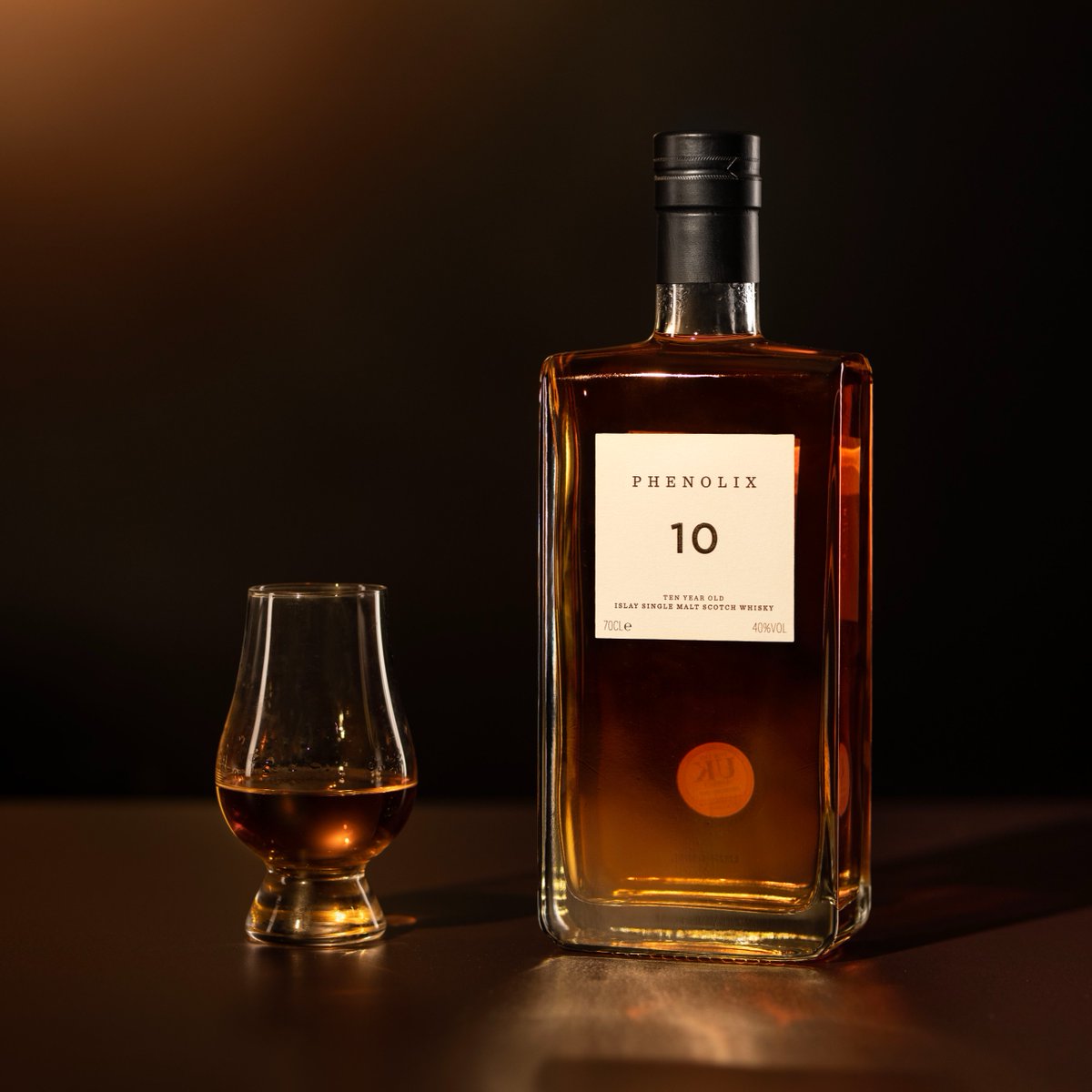 Master of Malt @MasterOfMalt
13 hours ago
It's hard to know where to begin in the world of Jamaican rum, but @AppletonRumUK has got to be a good place to start if you want to give your rum cocktails a superb base to build from! 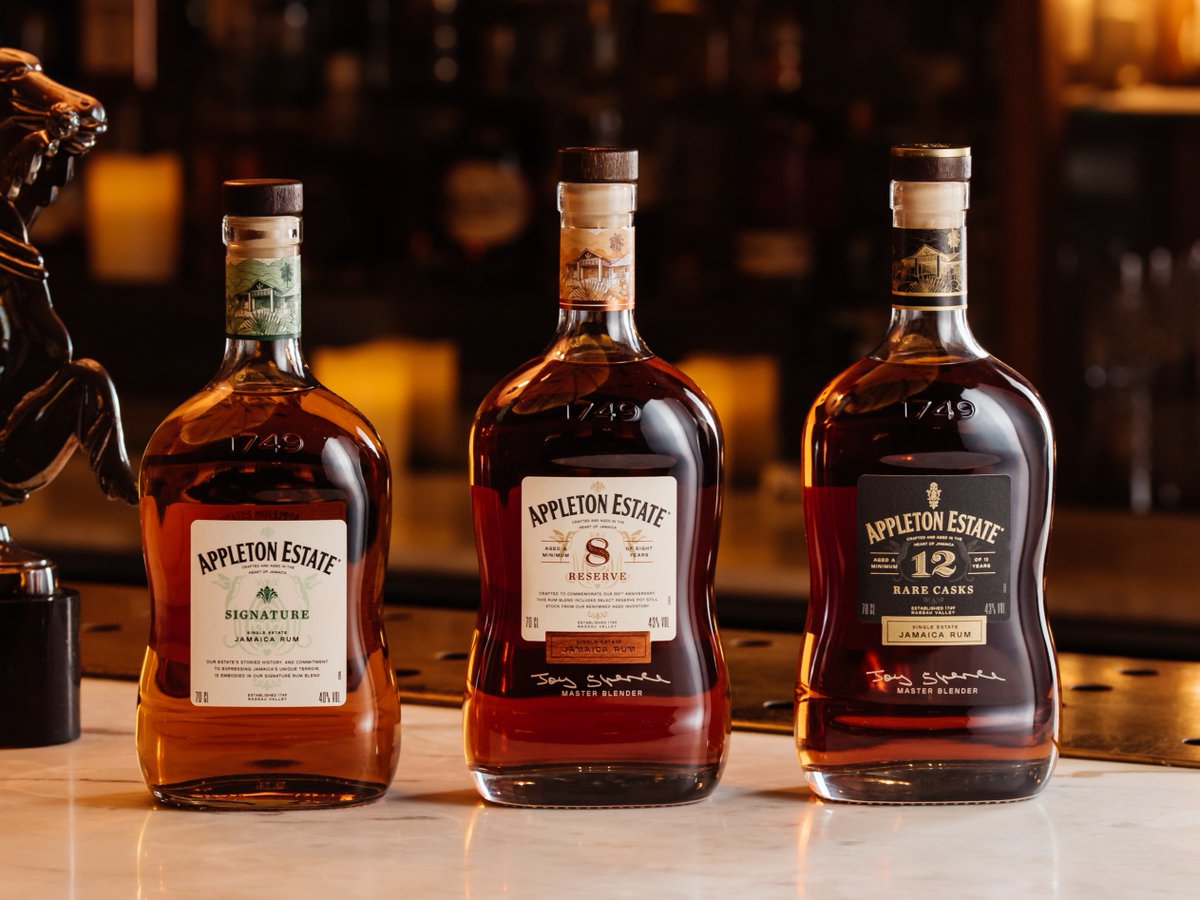 Cocktail of the Week: the Rose & Cardamom Martini

A short history of That Boutique-y Whisky Company