Dalmore Cigar Malt – Back for good.

Ben Ellefsen
1 Comment on Dalmore Cigar Malt – Back for good.

Last Tuesday evening, I was invited to the salubrious surroundings of the Four Seasons hotel on Park Lane, to sample the re-invention of a classic Dalmore Dram. This whisky provoked more controversy through its ousting and subsequent reinvention a couple of years ago than perhaps any other spirit, save perhaps that which we do not mention:

I’m talking of course, about The Dalmore Cigar Malt.

Discontinued in mid-2009, this dram used to sit above the 12, and below the 15 in terms of both the price-point, and the age-profiles of the whisky that went into the blend. The dram always used to tread a fine line, managing to combine huge sweetness and unctuous mouthfeel, with effortless simplicity, whilst never seeming ‘too straightforward’ as a whisky in its own right.

The replacement for the Cigar Malt was the Dalmore Gran Reserva – so called (allegedly) to rid owners – and one of the world’s largest producers of ‘volume’ blended Scotch – Whyte and Mackay of any nasty association with horrible Cigars that damage people’s health. Hmm. Think I’ll leave that one well alone.

Thankfully, whatever madness provoked this decision in the first place has been quelled / quashed / moved to HR, and the Cigar Malt now returns to our shelves, restaurants, and bars in mid-to-late January. 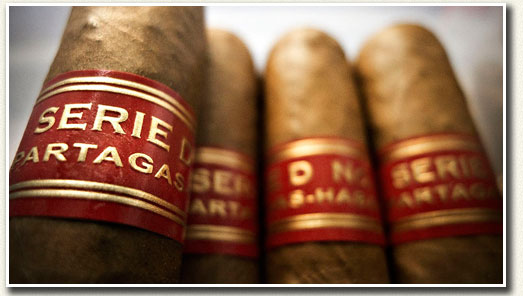 Serie D No.4 – a very robust and forceful smoke

The blend has been slightly re-worked, and now contains a slightly older set of whiskies, as such commanding a slightly higher price-point than before (£55ish). The Partagas Serie D No. 4 was the benchmark cigar used as a pairing to The Cigar Malt.

Now – I’m not sure how many of you are familiar with the wonderful world of Cigars, but the Serie D No. 4 is definitely a ‘challenging’ smoke. If we were talking whiskies, this would be a cask-strength, high peat Islay without any doubt. But it’s a very drinkable high-peat cask-strength Islay. An Uigeadail maybe. It’s very, very obvious that the master blender (the one and only Richard Paterson) is an avid cigar smoker, as this represents a choice that may well be anathema to the ‘once-a-year New Year’s eve’ Cigar smoker’, but to those who enjoy cigars on a regular basis, should provide a good solid pairing to work with.

So, without further ado, onto the whisky itself. 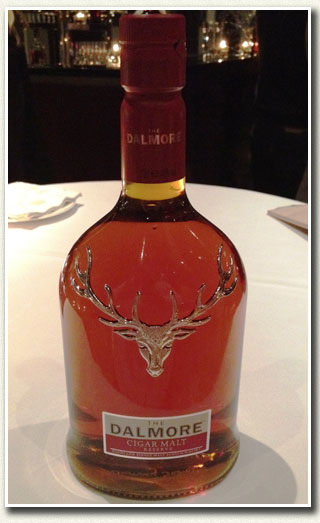 Palate: Yet more toffee, Caramel edging towards the burnt cinder-toffee side of things. Flamed Orange-Zest, and perfectly integrated sherry.

Overall: Definitely meets the criteria of pairing with a ‘BIG’ cigar. I’m far from convinced that if I’d been presented this in a line-up of dry to medium rums after a Partagas Serie D No.4, I’d have even picked this out as a whisky, and I certainly don’t mean that in a derogatory way – the subtle nuances of many whiskies can be lost when bashed into submission by a robust Robusto, and this whisky is certainly a very good option for a pairing.

One of the highlights of the evening (it’s always the little touches that get me) was being served a little orange cream tartlet, which was topped with a tiny piece of Candied Orange peel. This is perhaps the most apt food-pairing for a whisky which basically tastes of Candied Orange, and it really did work very well indeed. 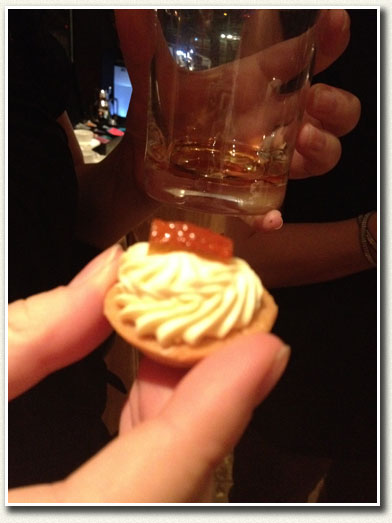 It of course goes without saying that with the name ‘Cigar Malt’, this whisky would sell like hot-cakes even if it was comprised entirely of Loch Dhu that had been given an extra maturation in a barrel previously used to hold industrial waste, such is the evocative draw of the thought of enhancing your cigar by pairing it with a whisky constructed specifically to do so.

Whilst the price-point of £55 might seem on the high side for a whisky with an average age of 13 or so years (when compared with the rest of the Dalmore range), the fact of the matter is that if you’re happy to spend £17 on a cigar, it’s a positive bargain.

What’s that you say? We should start stocking cigars so that people can enjoy the pairing themselves? Oh alright then. Give us a few weeks.

Master of Malt @MasterOfMalt
2 hours ago
Kirsten Ainslie is the new assistant blender at Brown-Forman in Scotland after showing “she has the best nose for the job.”

Master of Malt @MasterOfMalt
13 hours ago
Three cheers for Charlie! #Whisky writer Charles MacLean ( @_Whisky_Max_) has been honoured for services to Scotch Whisky with an MBE after being named in Queen’s Birthday Honours list. https://t.co/czcK734q5j
View on Twitter
0
3

A Christmas Message from Master of Malt