Henry Jeffreys
1 Comment on Cocktail of the Week: The Vesper

Apparently there’s a new James Bond film out later this month so we’re knocking up a cocktail invented by Ian Fleming with Mermaid gin and vodka. It is, of course, the Vesper!

When writing this blog, we dive into our collection of cocktail books to try to find the real story behind various drinks. The answer is usually, nobody really knows. Perhaps because everyone was drunk at the time. Just look at the various competing histories of the Negroni or Martini; being a cocktail historian isn’t as easy as it looks.

The first appearance of the Vesper

With the Vesper, however, things are more straightforward. It was invented by Ian Fleming, author of the James Bond novels. It’s a twist on a Dry Martini and first appears in his 1953 book Casino Royale:

‘Bond insisted on ordering Leiter’s Haig-and-Haig “on the rocks” and then he looked carefully at the barman. “A dry martini,” he said. “One. In a deep champagne goblet. Three measures of Gordon’s, one of vodka, half a measure of Kina Lillet. Shake it very well until it’s ice cold, then add a large thin slice of lemon peel. Got it?”’

Now, there’s a man who knows what he wants. The cocktail was named after Bond’s fellow agent, and, of course, lover, Vesper Lynd (memorably played by Eva Green in the 2006 film Casino Royale). We are mentioning it because later this month there’s a new Bond film, No Time to Die, which was seemingly named using the patented Random Bond Film Name Generator. See Die Another Day, Tomorrow Never Dies, A Chance to Die, To Die, To Sleep etc.

We don’t know terribly much about the new film apart from it spent a lot of time in development hell and was then further delayed because of the pandemic. But it looks like it’s finally here, to be released in Britain on 28 September. We’re particularly looking forward to it because Phoebe Waller-Bridge was drafted in at the last moment to provide some humour to the script. Perhaps she’ll add a much-needed dose of awkwardness to the numerous sex scenes. Whether it works or not, Fleabag meets Ian Fleming surely has to be worth watching. 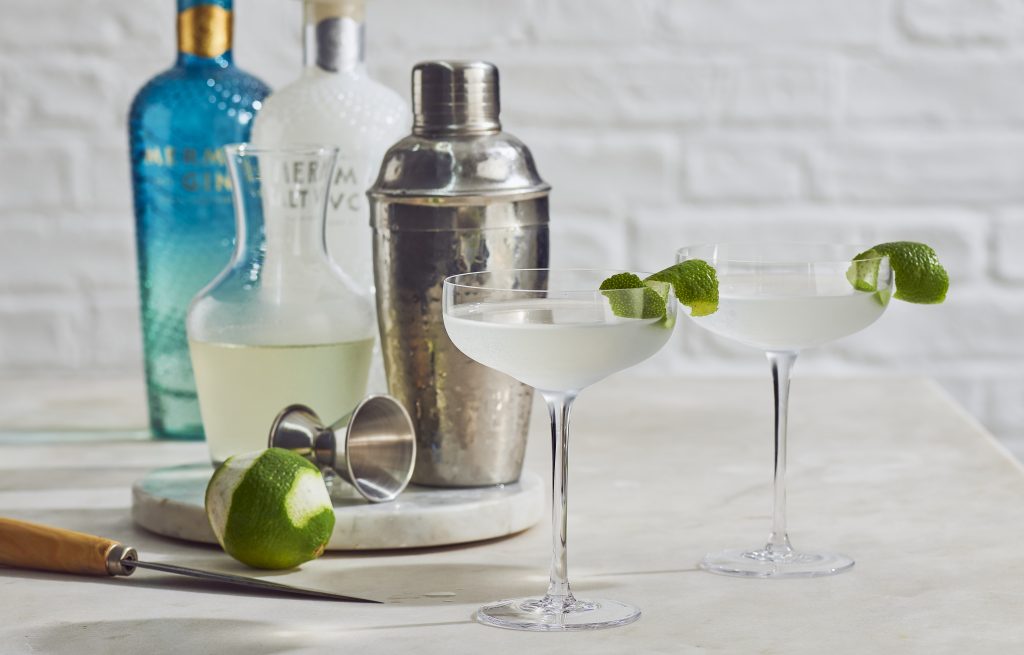 Of course, Bond is about so much more than the film. There’s the cars, the watches, the suits, the dresses, and, of course, the booze. Bollinger is taking care of the Champagne and in recent films Macallan has played a prominent role but as yet we don’t think Bond has an official gin sponsor – which seems like an oversight on somebody’s part.

Bond used Gordon’s gin to make a Vesper but it wouldn’t have been the namby pamby 37.5% ABV modern UK Gordon’s, it would have been more like the stuff you can buy in duty free. Similarly, the vodka used, Smirnoff, would have been higher ABV. Also, it’s hard to imagine now, but vodka was considered quite the exotic drink at the time. In the early ‘50s, most people outside Russia or Easterrn Europe would never have tasted vodka so Fleming was showing off his sophistication with the Vesper. Perhaps the modern equivalent would be using an artisan mezcal.

To make our Vesper we’re using Mermaid gin, weighing it at a nice 42% ABV, and made with rock samphire and other local botanicals on the Isle of Wight, and Mermaid Salt vodka. It’s really worth using a vodka with a bit of weight and flavour. Unfortunately for Vesper lovers, Kina Lillet, an aromatised wine made with quinine, is no longer made these days, but in its place you can use Lillet Blanc though it has less quinine character or Cocchi Americano.

Right, it’s time to put on your dinner jacket, practise your one-liners and get shaking.

How to make a Vesper

Shake in an ice-filled shaker, until really cold, strain into a chilled Martini glass or coupe and serve with a twist of lemon.

Sassy: Putting the sass in cidre