Cocktail of the Week: The New Yolk

Annie Hayes
No Comments on Cocktail of the Week: The New Yolk

This week we’re serving up a bourbon-based twist on the Brandy Alexander called the New Yolk. This dessert-style cocktail is straight off the menu at City Social, Jason Atherton’s Michelin-starred restaurant and bar in London. Here, bar manager Catalin Ciont shares the story behind this indulgent tipple and talks us through the recipe…

Are you a ‘main and dessert’ rather than ‘starter and main’ kinda person? Do you find yourself partial to a pun-based cocktail name from time to time? Do you like drinking bourbon? If you answered yes to the above, prepare to feel many things as we describe this week’s Cocktail of the Week to you.

Named New Yolk, this delectable drink hails from City Social’s ‘Signature’ list – a flavourful tour of Atherton’s various venues across the globe, from the Philippines to Doha, Dubai to Shanghai, St. Moritz to London and many more regions besides. When the team assembled the menu, they matched each restaurant to a classic cocktail before creating their own twist on the serve using different flavours and ingredients associated with the local culture there.

The New Yolk represents – you guessed it – Atherton’s New York-based restaurant The Clocktower, and combines bourbon whiskey, zabaglione cream (more on this in a moment), double cream and vanilla syrup. It’s a decadent whiskey-based twist on the classic Brandy Alexander, traditionally consisting of Cognac, crème de cacao and cream, usually topped with a light dusting of nutmeg.

While brandy-based sipper rose to prominence during the early 20th century – i.e. ages ago – it wasn’t the original. In fact, it’s a variation of an earlier, gin-based cocktail that was simply called ‘Alexander’. New Yolk, then, is a twist on a twist on a classic. Like the movie Inception in cocktail form, but with more double cream and fewer cliffhangers.

You might be wondering which ingredients put the ‘New York’ in ‘New Yolk’. As you may know, New York City has the largest population of Italian Americans in the entire country, and the cocktail is designed to reflect this in both flavour and formulation – bringing an Italian cooking technique together with America’s homegrown whiskey, bourbon. As such, the cocktail does require a little preemptive kitchen prep – City Social is a Michelin star venue, after all – but you’ll be pleased to hear there’s no complicated equipment involved. You just need a kettle (or a hob) and a couple of bowls.

“We’re going to use an Italian cooking method well known to make pasta carbonara, called bagnomaria or ‘bain-marie’,” says Ciont, “a type of heated bath. In our case, we’re using it to make a lovely homemade cream called zabaglione, which we will add to our cocktail later. It’s mostly used in Italian desserts for its creamy texture.” 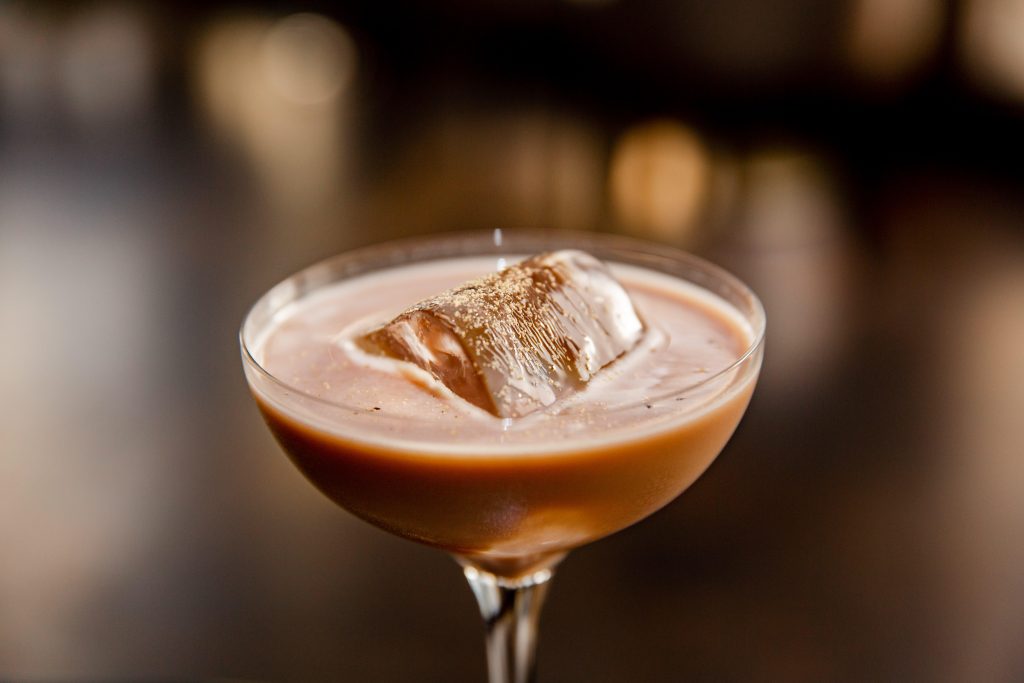 The key ingredients are the bourbon and homemade zabaglione cream, Ciont says – the bourbon giving the drink body and structure; the lactose from the double cream softening and rounding the alcohol. “Together with the rest of the ingredients they bring a unique pleasant taste and creamy texture to your pallet, easy to drink any time in the day or night,” he adds.

The method is simple – shake and strain – but if you don’t have a professional cocktail shaker to hand, a protein shaker or blender will work too, Ciont says. Just follow the instructions below, grate some Tonka bean over the top (very much an optional garnish, it’s important to note) and you’re good to go.

Ready to get cracking (no yolk intended)? Below, you’ll find the methodology for both the zabaglione cream and the cocktail. As for any remaining cream left over… we hear it goes down a treat with a little fresh fruit and crushed amaretti.

Fill a shaker up to the halfway point with ice before adding the bourbon, homemade zabaglione, double cream and vanilla syrup. Give the mixture a strong shake before straining it into a coupette glass. Use a kitchen fine strainer to avoid any pieces of ice in your glass. Garnish with grated Tonka bean and enjoy.

* To make your zabaglione you’ll need 6 egg yolks, 25g caster sugar, 50ml sweet wine or vermouth (like Martini Rosso). Fill a bowl with one litre of boiling water and then place another bowl on top (so the water heats the bottom). Add the egg yolks, caster sugar and sweet vermouth and stir the mixture until all the ingredients are creamy. Set aside.

Take a VR tour of Royal Brackla Distillery with MoM!