Henry Jeffreys
No Comments on Cocktail of the Week: The Montenegroni

As any fule kno, Negroni = Campari + sweet vermouth + gin. But not always, this week we’re mixing things up a little by chucking the Campari and using Amaro Montenegro instead.

The constant factor in most Negronis is Campari, so much so that Campari has owned the 100 years of the Negroni celebrations that took place this year. Italy, however, is full of amari (bittersweet liqueurs) which you can use in place. One such is Amaro Montenegro from Bologna, named after Princess Elena of Montenegro who became Queen of Italy in 1900. It has an elaborate production process involving over 40 botanicals including vanilla, eucalyptus, orange and cinnamon. Some are macerated, other boiled or distilled to a recipe perfected in 1885 by Stanislao Cobianchi. Today master herbalist Dr. Matteo Bonoli is in charge with keeping things consistent.

The flavours are sweet, rich and round with a distinct chocolatey note. Back in Bologna, it’s usually drunk as a digestif alongside a cup of espresso but for a while now, it has been a liqueur revered by the drinks cognoscenti. Last year it won a gold medal at the IWSC. 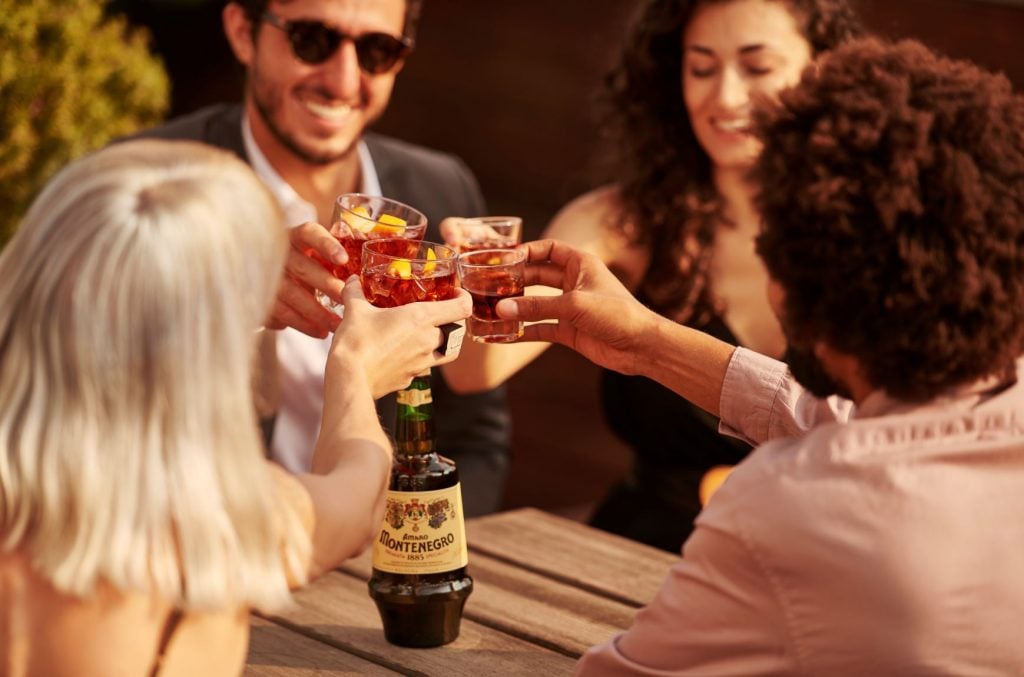 The Montenegroni: can people this photogenic be wrong?

As part of the plan to raise its profile, Amaro Montenegro is backing the Vero Bartender competition, where bartenders from around the country will compete to create a cocktail with a maximum of five ingredients (based on Amaro Montenegro, naturally). There will be northern and southern heats in September, with the UK final at the Punch Room at the London Edition Hotel on 20 October. But that’s not the end of it, because 12 finalists from around the world will then compete in the global final in Italy on 19 November! So if you fancy yourself behind the stick (to coin a phrase) then you should enter.

To kick things off in style, this special Negroni has been created by Rudi Carraro, UK brand ambassador for Amaro Montenegro. In a bold move, Carraro has not only chucked the Campari, but he’s not using vermouth either. He plays by his own rules. Instead he’s using Select Aperitivo, a low-ish alcohol amaro (17.5% ABV) from Venice, not dissimilar to Aperol. It’s what many Venetians prefer to use in a spritz in place of the mighty orange beverage. He didn’t specify the gin, so we’re using delicious, lemony Brooklyn Gin for no particular reason except we like it. The result is something mellower and more complex, but less boozy than the classic Negroni. It would be equally at home after dinner as before.

Carraro originally designed this recipe as a punch as a nod to the bar at the London edition, but we’ve domesticated it into a single-serve version. Right, let’s get stirring.

Add ingredients to an ice-filled tumbler, stir and garnish with a slice of orange.

A botanical white rum? Brilliant! Why has no one done this before?