Cocktail of the Week: The Metaxa Spritz

Henry Jeffreys
No Comments on Cocktail of the Week: The Metaxa Spritz

Today’s we’re getting to grips with one of the world’s unique spirits, Metaxa, a blend of brandy, sweet wine and natural flavours with a special cocktail from award-winning Athenian bar The Clumsies.

If you’ve ever been on holiday to Greece, then you’ve probably tried Metaxa. Many restaurants give customers a little glass after a meal rather as they do with limoncello in southern Italy. Only, in my opinion, Metaxa is a far superior drink. It’s often described as a brandy, but this isn’t quite right as it’s a blend of brandy with sweet wine and natural flavours such as anise, rose petal and herbs.

The brand was founded in 1888 by Spyros Metaxa in Piraeus, the port of Athens. From the beginning, the firm has used sweet Muscat wine from the island of Samos. This is an ancient style of wine that was especially-prized in the Middle Ages but Muscats crammed full of sugar are still made all over the Mediterranean not just in the Greek islands but Sicily, France and Spain, and as far away as South Africa and Australia. The brandy is high quality too, double pot-distilled brandy from Savatiano, Soultanino, Kourtikakis grape varieties and aged in Limousin oak. The wine, flavouring and brandy are then married in cask for a year.  The man in charge of the process is the so-called Metaxa master Constantinos Raptis, only the fifth ever to hold this title.

The Metaxa journey starts with the 5 Star expression, the sort you’ve probably tried in Greek restaurants and goes up in age and complexity to 7 and 12 Stars plus various special bottlings. I find the older they get, the less sweet they taste, with more Cognac-like woody notes but always with that floral Muscat and rose petal taste.

It’s a unique spirit, but the idea behind it isn’t so unusual. From fortified wines to sherry-cask whisky, mixing wine and distilled alcohol has a noble history. There’s even a law in Canada known as the 9.09% rule allowing whisky producers to add up to 9.09% non-Canadian whisky to the blend such as sherry or Port. You can try this at home, a spoonful of Oloroso sherry is a great way to liven up an indifferent whisky. Anyway, I digress… 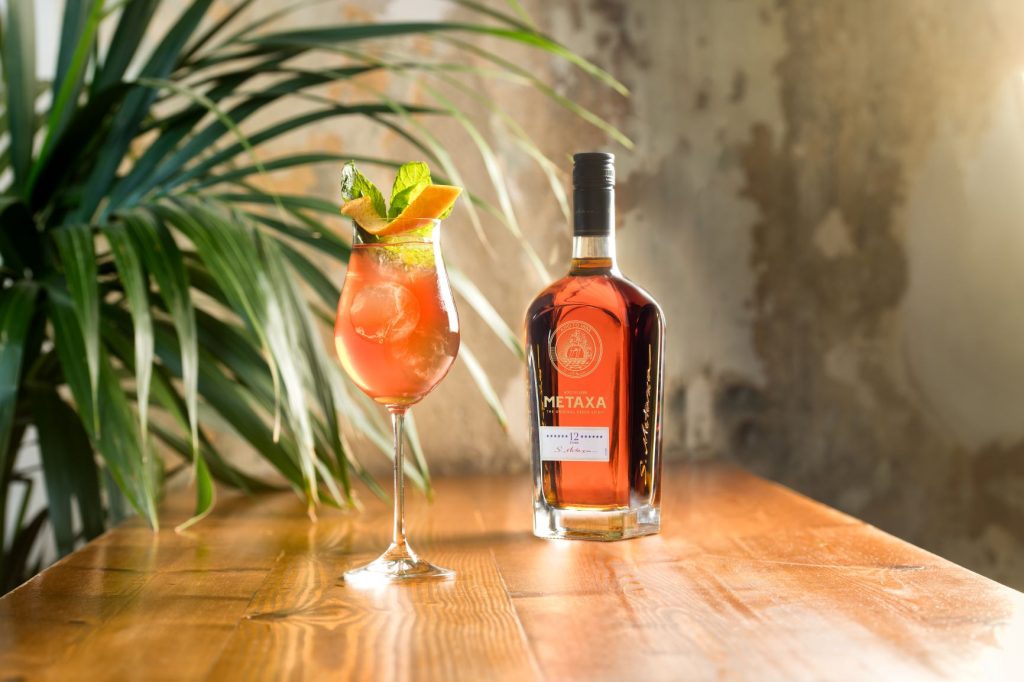 What I love about Metaxa is you can really taste the quality of the ingredients, the Muscat-laden sweet wine, the delicate spicing and then the long finish from aged brandy. I’ve been fiddling around with a bottle of 7 Star and it’s really an incredibly versatile drop. The cocktail below is from award-winning Athenian bar The Clumsies, and very nice it is too, but you don’t need to go to such lengths to get the best out of Metaxa. As a mixture of wine, brandy and spices, it’s basically a cocktail in a glass. You don’t need to add much or really anything to get a delicious complex drink.

I added a measure to a Champagne flute, topped it up with some Biddenden Kentish dry sparkling cider (though sparkling wine would also be great) and then added an orange twist. Absolutely delicious. It’s also great neat and chilled, especially after a big Greek feast. But the recipe below from the Clumsies shows how well this adaptable spirit works in more elaborate cocktails. Behold, the magnificent Metaxa Spritz!

Build over ice in a large wine glass, stir gently, garnish with an orange twist and sprig of mint. Yamas!